Akira Yamaoka, premier videogame composer and all-round talented fella, is best know for his work on the Silent Hill series. And rightly so; rarely has there been such a perfect fit between a videogame and its music, and said music is as an important aspect of the terror as the graphics or the story. Some examples? Sure, why not.

"White Noiz", from the sublime Silent Hill 2 soundtrack. Haunting, ethereal, just what you want for the story of a deluded madman and his trip to the world's worst tourist destination outside Pyongyang.

Or how about the original Silent Hill's "Until Death", which is raw unescapable horror in musical form. I mean, if you are going to put this on your MP3 player, make sure it doesn't randomly come on when you're walking home from a friend's house after midnight. People don't take kindly to nearby stangers shrieking like little girls in the middle of the night.
So the music of the Silent Hill series is some of the best around, but that's only part of Yamaoka's musical output since he joined Konami in 1993. Today, I'll be looking at some other contributions he's made to the videogame music canon outside the sinister world of Silent Hill.


To my mind, not enough games feature anthropomorphic opossums that fly jetpacks and pilot giant robots, but then again I am old and out of touch. The games that do fall into this category are the Rocket Knight Adventure games, in which the heroic Sparkster engages in some excellent 16-bit platform japery, all set to excellent music.
A problem arises when trying to attribute music from this era of gaming to a specific composer, because they were often part of a team and individuals were rarely credited. What is know is that Akira Yamaoka worked on the soundtrack to the Sparkster:RKA2 (along with the equally talented Castlevania composer Michiru Yamane), so here's a track from that very game.


Akira Yamaoka and football might seem like a strange fit, but someone had to create the score for Konami's flagship sports title and Yamaoka got the job. He worked on the soundtracks for both ISS Pro and ISS Pro '98 (Winning Eleven 3 and 4 in Japan), and while the music is catchy in its way, it's not going to blow your mind - here's the "Play Demo" track to help you hear what I mean. That said, it's a lot better than the music composed for most sports games, and nowadays you don't even get that; just (shudder) EA TRAX and its ilk. One thing about this: is it just me, or does it have a particularly "PS1" quality to it? For me, there's some kind of indescribable quality that just screams "Playstation 1 music!" Weird.

Gradius III & IV Collection
Created between Silent Hill 1 and 2, Gradius III & IV is a compilation of... well, you figure it out. A new system means new music needs to be created for the menus and so on, and here Yamaoka proves he's no slouch at recreating that glorious arcade-style Gradius music. This is "Select", the title screen theme, and aside from being insanely catchy it really does feel like a lost track from some early-'90s shooter.

Shattered Soldier may well be the most overlooked Contra game, which is a shame because it's pretty good. Even more of a shame is that fact that it's soundtrack isn't more widely celebrated, because it's bloody fantastic. This track is "Venus", and it's more metal than a chrome-plated steel mill. Just listen to that guitar! You could play this to Dave Mustaine and not feel like he was going to judge you harshly. Some of the soundtrack has a more electro feel to it, which brings me nicely to...

Yamaoka has contributed a number of tracks to Konami's arcade DJ-em-up Beatmania series, as well as other games in the "Bemani" series such as Guitar Freaks. His Beatmania work is probably the most "electro" of his work, so if you like his stuff but would prefer something without the guitars, this is your best bet.

Ah, Rumble Roses: Konami's all-female wrestling title has the core of a good game in there, but it's quickly overshadowed by the fact you can't help but feel like a massive perv when you play it. The soundtrack was composed by quite a few different artists, but here's Yamaoka's contribution: the hard-rocking "I'm Too Virtuous", theme of the "sexy teacher" character. That is, as opposed to the "sexy nurse" or the "sexy cowgirl" or the "sexy Mongolian wrestler". Do you see where they were going with this?

Not content to stick to videogames, in 2006 Yamaoka released a solo album called IFuturelist. It bears some similarity to his videogame work, and indeed some of the songs are longer, remixed versions of Beatmania tracks. It's definitely more on the electro side of things, although there some Silent Hill-esque tracks on there, such as "Adjust Rain". This is my personal favourite, though; "Love Me Do", a pounding beast made of almost sub-sonic bass and synthesiser flourishes.

Shadows of the Damned

After working on seven (or eight if you count Silent Hill: The Arcade) and various other titles, Yamaoka left Konami in 2009. Fortunately, he soon joined Grasshopper, and the dream team of Suda 51 and Shinji Mikami. Their first game was Shadows of the Damned, and Yamaoka's talents are once again at the forefront.

It features more of his heavy rock stylings, such as in "G Drive", the theme of the hero and his skeleton motorbike...

... as well as more sedate, unsettling fare such as "Smile For a Broken Dawn".
Next on the Grasshopper crazy train is Lollipop Chainsaw, a sweet little title about a cheerleader who kills zombies with a chainsaw. With Suda 51 behind it and Yamaoka providing the music, I'm excited about it already. 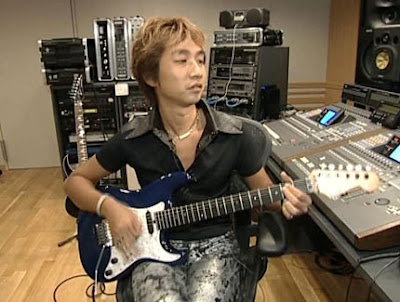 And there you have it. Renowned for his Silent Hill music, but with more strings to his bow than you might think, hopefully Akira Yamaoka will be making (and pushing the boundaries of) videogame music for a long time to come.
Posted by VGJUNK