They say that to be truly happy, you have to enjoy the simple things in life. A single flower's bloom. The laughter of children. Shooting hordes of giant spiders with an incendiary shotgun. Yes, the happy day has finally arrived when the EDF rises again to take on the Ravager hordes in Vicious Cycle's PS3/Xbox 360 exterminate-em-up Earth Defence Force: Insect Armageddon. 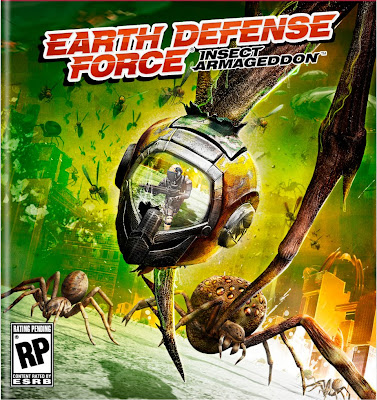 This is the first review I've done of a newly-released game, so you can probably guess that EDF:IA is something very close to my heart. For those of you who haven't sampled the delights of the Earth Defence Force series, here's a quick run-down. Originally developed by Sandlot and released as The Chikyuu Boueigun for the budget Simple 2000 series of Playstation 2 games, the EDF games are a series of third-person shooters set during an alien invasion. Most of the enemies are huge, mutated insects like ants and spiders, along with flying saucers, robots and the occasional distant relative of Godzilla. You play as an EDF trooper outfitted with a variety of weapons, dropped into a destructible city with one goal and one goal only: blow the everloving crap out of anything that moves. 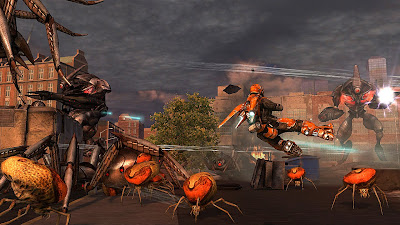 The first three games in the series were released in the West as Monster Attack, Global Defence Force (both PS2) and Earth Defence Force 2017 (Xbox 360), and their style of simple yet enthralling action mixed with B-movie corniness has seen them achieve cult status amongst gamers. My own EDF experience mostly comes from the glorious Global Defence Force, a game I utterly adore and which is one of the PS2's true underappreciated classics. So, when news of a new sequel was announced I was excited and probably did some kind of special dance to celebrate, but I forget. My enthusiasm was tempered somewhat by the news that EDF: Insect Armageddon was being developed by a different company, with the torch being passed from Sandlot to Vicious Cycle. Ever since the dreck that resulted from Konami farming out my beloved Silent Hill franchise to small, inexperienced developers, I've been wary of sudden developer shifts. The question is: could Vicious Cycle create a new EDF game worthy of its predecessors? 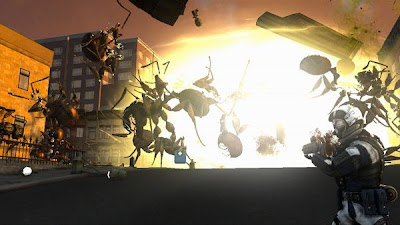 Happily, the answer is a (nearly completely) resounding yes. The basic set-up is the same: you're an EDF soldier tasked with destroying the alien hordes in a destructible city. So far, so good. As soon as you start playing, you realise that VC are clearly big fans of the franchise, and that feeling only gets stronger as the first wave of ants comes scurrying down the street at you, climbing over buildings and gobbing acid at you. Then an ant throws a car at you and you use your dodge move to roll out of the way. Unless you're some heartless monster, you smile as you get the ant in your sights and blow him away. EDF is back. 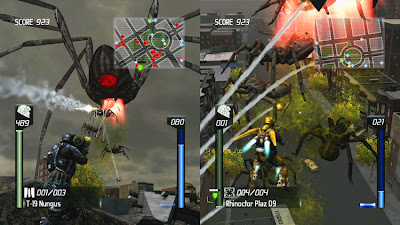 EDF's roots lie in simple arcade shooters like Smash T.V. and later monster-filled FPS games like Serious Sam. There's no boring peek-a-boo gunfights from behind cover here, nor poorly-implemented stealth missions: it's just pure blasting action all the way. The words "simple" and "pure" get used a lot when people discuss the EDF games, and with good reason, because that's a major source of their charm. Or course, I'm not saying that all videogames should be basic or boiled down to their bare bones, but there's enough room in the marketplace for both. 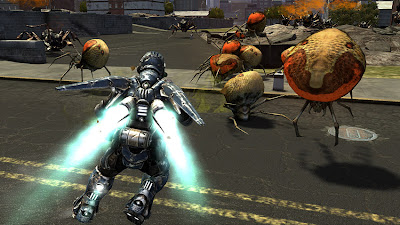 It's difficult to play EDF:IA and not compare it to Global Defence Force, so I won't. Instead, it can illustrate some of the improvements Vicious Cycle have made while keeping the core EDF formula intact. Being a budget-label release, GDF was almost minimalistic in its approach: you had two types of trooper to choose from, one that could fly and one that couldn't. You carried two weapons into battle, and occasionally you could get in a vehicle... and that was it. EDF:IA expands this to four troop types: the basic Trooper, an all-round character who can use a wide ranger of weapons, the lightly-armoured Jet unit, which can fly and uses plasma weaponry, the Tactical unit which can deploy turrets and my personal favourite, the Battle armour, a great fat lump of a warrior who equips the heaviest of weapons and has an energy shield. 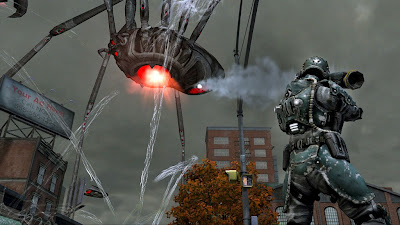 The new troop types add a welcome diversity to the game, and they are much better balanced than in GDF, where the flying Pale Wing was a soaring angel of plasma-based death while the Infantry was a plodding lump of spider-bait. All the armours can be levelled up, unlocking new weapons (around 300 in total), increasing their armour and upgrading their special skills. 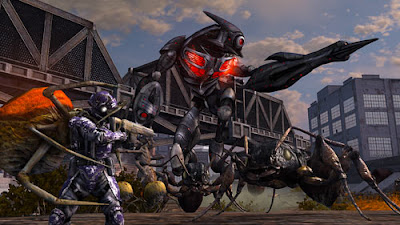 Graphics have never been the strong point of the EDF series, with power better spent on putting more enemies in your firing reticule, but EDF:IA is definitely a step up from from the previous game. The city of New Detroit looks good (but not so good you feel bad about leveling the place,) and the Ravagers themselves look more menacing than ever. In particular, the new robot mantis enemy looks great, and all around the cast of foes are impressively gruesome in their scaled-up insectoid way. The sound is decent, although I don't remember hearing any of the music over my explosions, and the voice acting is pitched just right for the B-movie atmosphere. It's even quite funny at times, particulary the clueless Intel officer and your comrades shouting at you to level up quicker so they can have a better gun, although you do hear the same phrases repeated quite a lot: I have taken to trying to kill my teammates everytime they tell me about how their brother-in-law used to be an exterminator. Actually, I should give the AI bots some credit: you get two computer-controlled teammates (although you can turn them off for a sterner challenge) and, aside from occasionally wandering into the path of your missiles, they're actually quite useful and not too dumb. 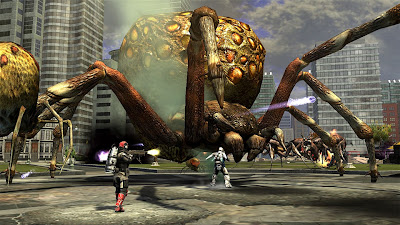 As always with the EDF series, though, it's the gameplay that shines. As I've said, it's simple, but it's simple done right. Your trooper is responsive and controls nicely, the enemies come thick and fast and the larger battles are downright impressive. There is a simple (that word again) joy in pumping a magazine's worth of high-explosive grenades into an advancing column of enemies and watching the city crumble, and it's an experience that you don't find all that often in the age of games like Call of Duty. 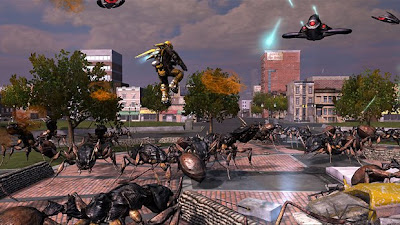 Of course EDF:IA isn't perfect. The main problem is the relative brevity of the campaign: with only 15 missions, it's a fraction of the length of GDF which clocked in at around 50 missions. The play time is extended by the three difficulty levels, (although GDF's aptly-named Impossible difficulty has been dropped, presumably for being, well, fucking impossible,) a survival mode and the unlockable Campaign Remix mode which sees you taking on the missions again but with different, more difficult enemy patterns. Still, if the biggest problem with a game is that you just want more, more, more, then something must be going right. The only other real problem (on the PS3 version, at least) is a slight audio glitch in some of the levels. 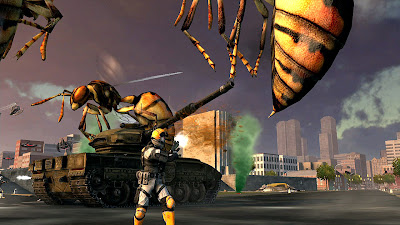 Something that's not really a problem, or at least not a problem I can explain adequately, is that is lacks just a smidgen of GDF's je ne sais quoi. It's possibly that I played GDF first and it holds a special place in my heart, but I think it's more an issue of scale: while EDF:IA certainly paints itself on an impressively large canvas, there's nothing to quite rival GDF's sense of being able to fly to the top of a 400-metre skyscraper, see a carpet of ants below you and launch hundreds of rainbow-coloured death beams into their midst. Not quite, anyway. 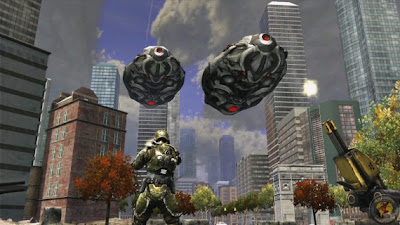 So, you can chalk this one down as a glowing review. I'm loving the heck out of Earth Defence Force: Insect Armageddon. It's kept the core EDF principles intact; the fast-paced relentless action, the swarms of enemies, the interesting weapons (thanks to whichever member of the VC staff suggested homing shotguns) and the sheer sense of fun that comes from playing a tightly-honed videogame. If you're a fan of the EDF series, drop what you're doing and go and buy it right now. No, I don't care that the shops are closed, order off the internet. If you're a newcomer to the series and you want some arcade-style fun, you should pick it up too. If you have anger-management issues, go and buy it; it's a great pick-up-and-play stress reliever. Oh, and did I mention it was released at a budget price? You can pick it up from between £20-25. Honestly, you should only stay away from it if you're an arachnophobe or don't like videogames where you shoot things. 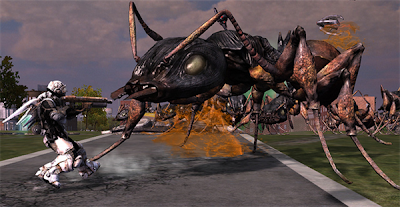 In closing, thanks again to Vicious Cycle for keeping EDF alive in a manner befitting the series, and here's hoping it sells well enough that Earth Defence Force: Insect Armageddon 2 comes along in the not too distant future, this time with a bigger campaign mode and even more things to shoot at.
Posted by VGJUNK