Hello there. It’s been a while, huh? That’s real life for you, always getting in the way and being an endless slog filled with responsibilities and hardship whose heavy burden is only lifted by the sweet embrace of death. I kid, I kid, I’m doing okay, I’m just busy and tired – but I can’t stay away from VGJunk forever, so I’m going to ease myself back in with a look at another selection of home computer game cover art! This time all the featured games have “knight” in the title, for no other reason than me thinking “hey, I bet there are a bunch of computer games with ‘knight’ in the title.” The process by which I select topics for VGJunk articles is not a deep, scientific one. Anyway, let’s get cracking! 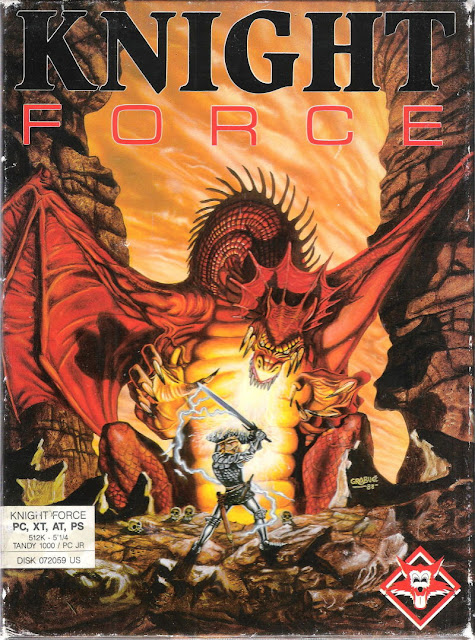 Now that’s the kind of thing you’d expect to see on the cover of a game about knights – a warrior in shining armour facing off against an enormous dragon. A classic image, I’m sure you’ll agree, harking back to the tales of Saint George, although as far as I recall Saint George didn’t have access to a magical sword that crackled with lightning. He just had, you know, God. Take this as a baseline, then, a typical cover for an eighties computer game starring a knight. Nice and straightforward, even if now that I look closer I realise that the dragon has weirdly human knees. What else do we have? 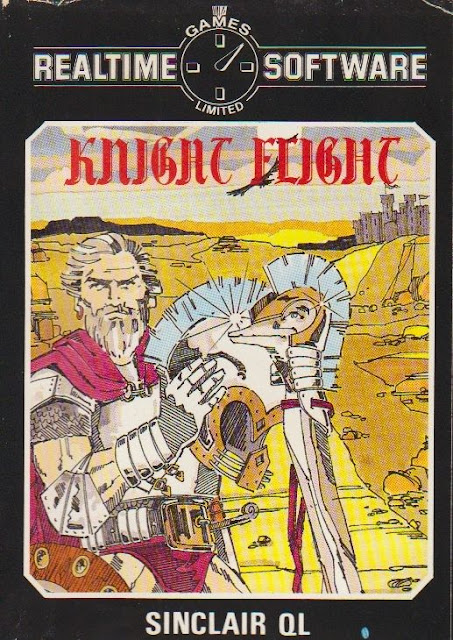 Already things are beginning to get a bit weird, with a knight who gives off a futuristic vibe despite there being nothing on his armour that couldn’t have been created by a medieval blacksmith with a very forward-thinking sense of fashion. He reminds me of Ramirez from the Highlander movies. I think it’s the earring. Forget about the knight, though, and take a look at that thing on the right. What the hell is it? A staff? A sword with the worst handle imaginable? The unholy offspring of a giraffe and a dolphin? Because that’s definitely a dolphin’s head, wearing a vaguely Roman helmet. A dolphin with a very human-looking eye. Is that going to be the theme of this article? Creatures with one human body part? Whatever the dolphin stick is, it’s making me want to play Knight Flight just to find out, so on that evidence this must be good cover art. 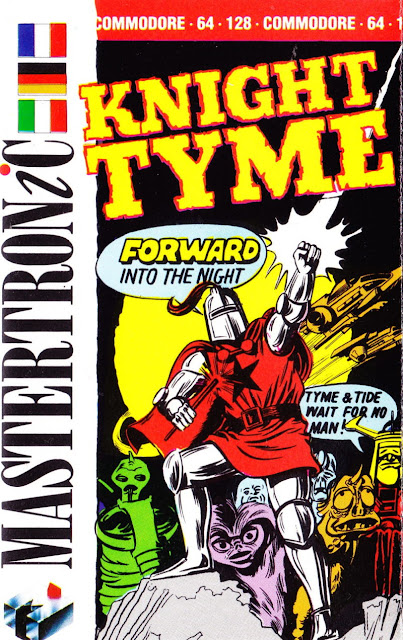 Oh yes, we’re going to be seeing a bunch of knight / night puns in this article. This one definitely has a futuristic theme, what with the spaceships and the Basil Wolverton-esque aliens, which makes it interesting that the knight himself looks, well, just like a regular knight. Maybe that’s a space helmet. And space greaves. And a space cape. Hang on a second – that belt, the little skirt, the circular clasps holding his cape in place… if this knight wasn’t copied from a picture of Doctor Doom I would be very surprised. However, he’s got one thing that Doctor Doom doesn’t – one small red stick. Quick, someone find this space knight a drum kit and he can join a Def Leppard tribute band. 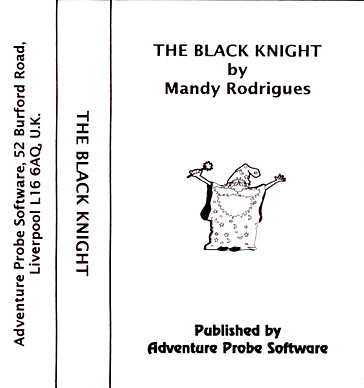 “Oh, bloody hell, there’s no knights in this clipart collection. Guess it’ll just have to be a cartoon wizard, then.” 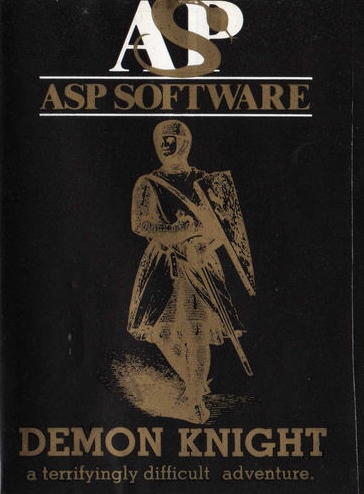 Here’s a game that I’m sad to report is not an adaptation of the Tales From the Crypt movie Demon Knight, a film that stars Billy Zane giving it more ham than all the butchers in Spain and an appearance by the late Dick Miller. Hop on Youtube some time and search for “demon knight billy zane” and you’ll see what I mean. This Demon Knight features no Billy Zane, but it does tout itself as “a terrifyingly difficult adventure,” something that is not communicated by the cover art. You know what this cover art reminds me of? Doing brass rubbings on a school trip. Chilling. 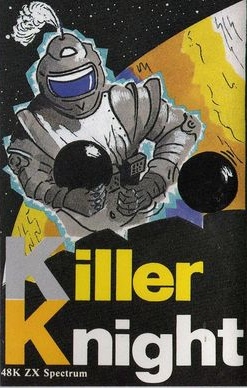 From a Demon Knight to a Killer Knight now, with another futuristic space-knight. Now you might be looking at this cover and thinking, “hey, this sure looks like it would be a Bomberman clone,” and I can see where you’re coming from. Those definitely look like bombs and the knight’s visor gives him something of a Bomberman-like appearance, but no. It’s actually a Donkey Kong clone. The knight throws cannonballs rather than barrels, and while obviously I cannot one hundred percent confirm that there isn’t a gorilla under that plate armour I’m fairly certain it’s just a bloke. Other than that it’s Donkey Kong, except really bad. I do quite like the cover art, though. It’s fun trying to decide if that thing coming out of his head is a white feather plume or he’s blowing a jet of steam out of his head in the manner of an angry cartoon character. 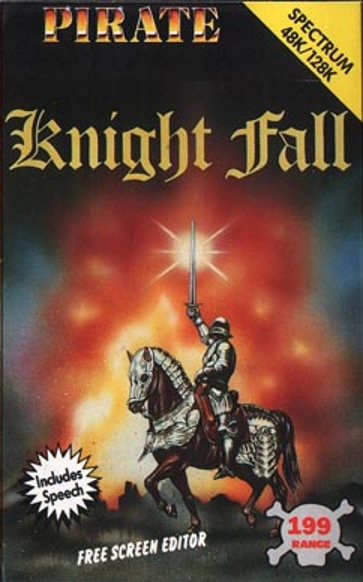 See what I mean about the knight / night puns? Anyway, this isn’t a very interesting cover but I included it because it’s by Pirate Games and that seems like a very dangerous thing to call your computer game company in the days of home taping. The risk of someone seeing it and thinking “Pirate games? Don’t mind if I do!” surely outweighs the benefits of having a cool skull-and-crossbones logo. 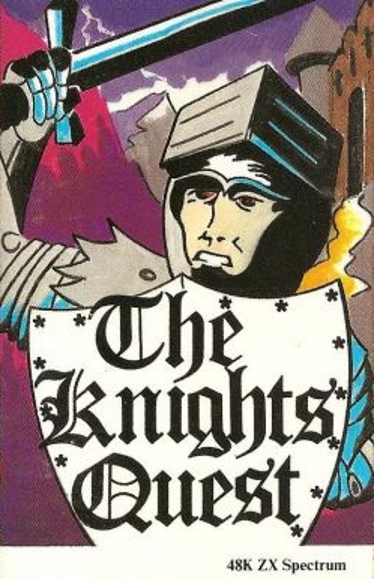 Oh, but I do so love these hand-drawn, amateur ZX Spectrum covers. They’re just so darned charming, and this is a good example of the form. Sure, the angular visor makes it look like the knight’s balancing a toaster on his head and he’s got one huge blue monobrow, but it’s got character. 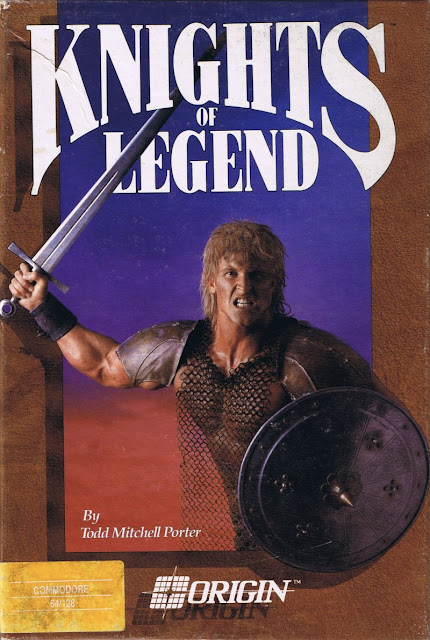 “Grr,” says the knight of legend. “Grrrr.” He’s put a lot of work into projecting a fearsome image of strength: the sword pose that allows him to show off his biceps, the chainmail bib that offers little protection but which does give a barely-impeded view of his bulging abs. Sure, he’ll last about six second in a battle before someone who knows what they're doing rams a dagger between his exposed ribs, but until then ye comely maidens in yon village taverne are going to be feeling a lot less chaste than usual. 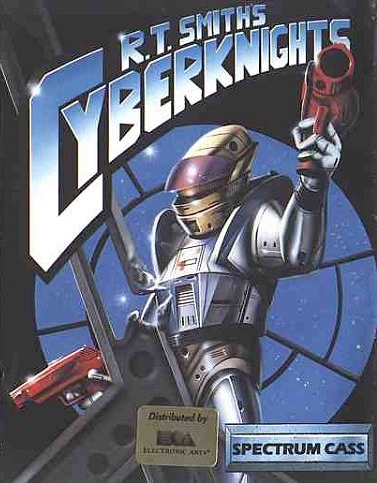 Ah yes, the story of Cyberknight, the warrior from the distant future who can only (ahem) achieve completion by rubbing his groin on steel girders like The Asylum’s version of Tetsuo: The Iron Man. Every construction site and builder’s merchants in Neo-Camelot has posters up warning employees to call the astro-police should the Cyberknight appear, his loins coated with WD-40 and a lascivious glint in his eyes. 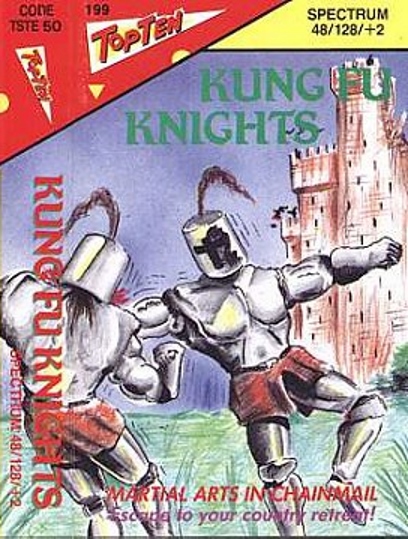 No, not Dark Souls with the Wood Grain Ring equipped but actual knights engaging in martial arts combat. See, the one of the right appears to be using Mike Haggar’s spinning lariat technique, because why not borrow from the best? Given that both combatants are wearing full suits of armour, I imagine that these knightly kung fu battles go on until one of the combatants dies of dehydration rather than because someone landed a telling blow. This is all a moot point, anyway, because the game’s blurb states that you have to punch and kick your way through the game – but then casually drops in that the knight also has a Colt 45. With no disrespect intended to kung fu practitioners the world over, I feel that makes the fisticuffs kind of redundant. 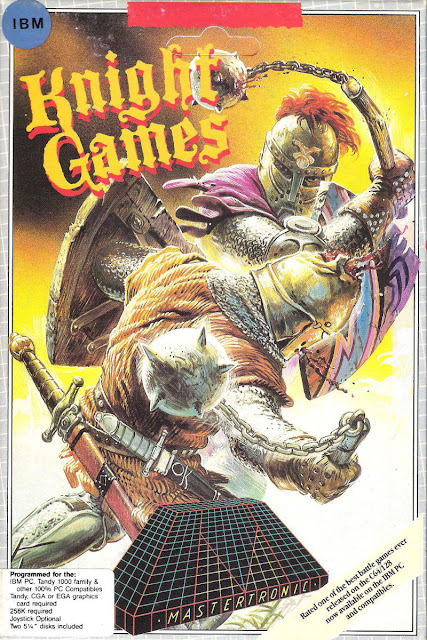 Here’s some cover art that’s just straight up good, a bit of classic fantasy illustration that nicely captures the brutality of medieval combat. Seriously, how hard would you have to whack someone in the noggin on order to break the handle of your mace? I think we can safely say that the knight in the foreground has been thoroughly bested in these knight games. Oh, and don’t let the quality of the cover art fool you; I’ve actually covered Knight Games in the past and it’s a bit rubbish.


Knights of the Desert, Commodore 64 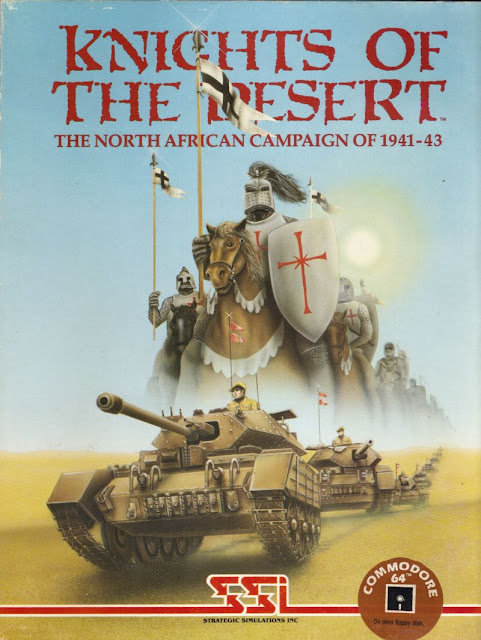 “I say, Stanley, I’m sure that these two-hundred foot tall mounted knights are going to put the fear of God into old Jerry, eh?”
“Too right and no mistake, sir. Almost makes me wonder why we bothered with the all the tanks, sir.”
“Ours is not to reason why, Stanley. Let’s just hope that there is plenty of hay waiting for us in Tobruk.” 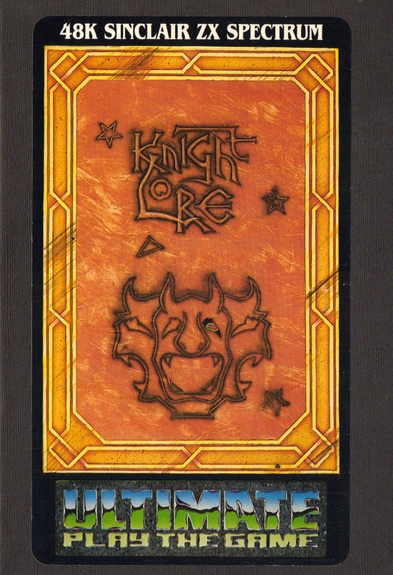 I feel like someone would call me out on it if I didn’t include Knight Lore in this article. So here it is. It’s not a very interesting cover. An engraving of a three-headed demon whose heads have all simultaneously realised that they’ve just stood in dog muck with no shoes on. Like I say, not thrilling, but here it is. 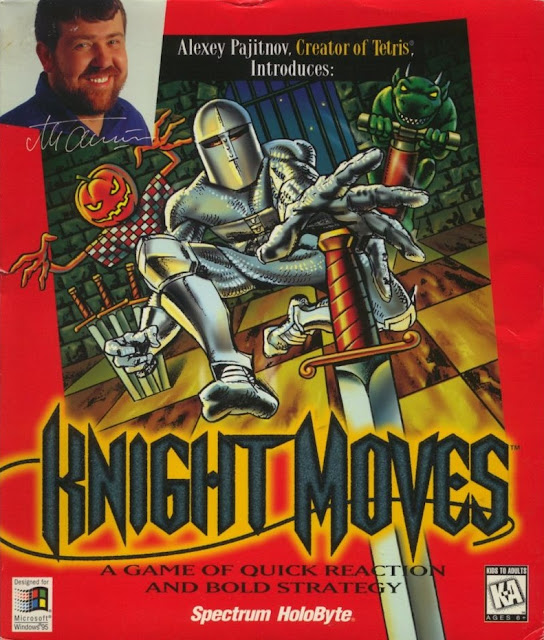 Hell yeah, a jack o’lantern! Picking knight-based games to cover finally pays off. Halloween seems like so long ago. Nice “tablecloth from an Italian restaurant” look you’ve got there, pumpkin man. But we’re here for the knights today, so let’s take a look at the chap in the centre and then suddenly realise that he’s wearing socks. Are those chainmail socks? Good god, imagine walking around wearing heavy metal boots filled with small metal rings. No wonder the “knight moves” in question seem to be a kind of hobbled, contorted lunge. 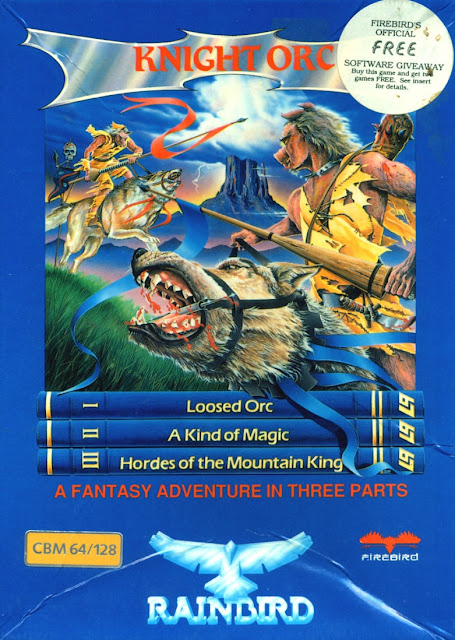 Is that supposed to be a pun on “nighthawk”? Previous experience suggests that it is, but this is also a cover depicting actual orc knights, jousting from atop giant wolves and presumably have a whale of a time. They probably want to get their direwolves to the vet, mind. That much bleeding in the mouth is a sign of serious gum disease and I imagine it’s hard to get Dentastix® on the blasted plains of Mordor. 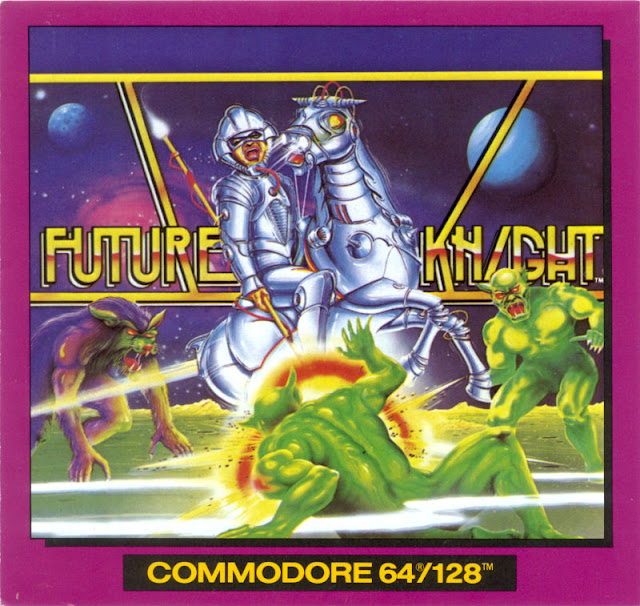 Oh yeah, now we’re talking. Definitely my favourite of today’s covers is Future Knight, where a future knight with a face that I’m sure is ripped off from a Turrican cover rides a future horse with what appear to be spiked nipples just below its neck. A blast from his laser-lance explodes a goblin, who appears to have already been laying down and begging for mercy, while another goblin and werewolf look on. A jet of fire blazes from the horse’s arse, so if the bottom falls out of the monster-slaying business then at least the Future Knight can clean up at the Grand National. Truly an awe-inspiring sight, I’m sure you’ll agree. But wait a minute, I’m sure I’ve seen that horse somewhere before… 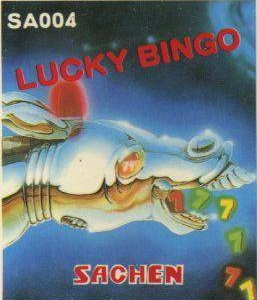 It’s the braying, number-spewing disco-bingo equestrobot from the cover of Sachen’s unlicensed NES game Lucky Bingo, a cover that I have claimed in the past is possibly the greatest videogame cover of all time! That’s a position I’m sticking with, but Future Knight’s cover is still pretty bloody fantastic. 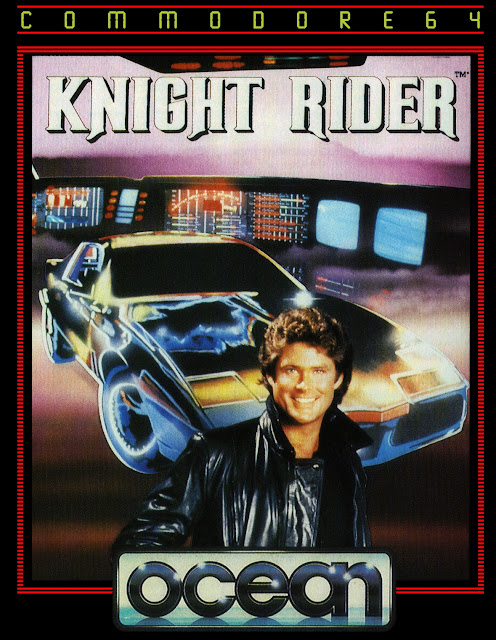