Or, What The Hell is That Thing Supposed to Be? He's blue, he looks perpetually gloomy and he's the star of the almost archaeologically retro Horace series of games for the Commodore 64, ZX Spectrum and various other arcane and ancient formats. Everybody, say hello to Horace, a miserablist mascot to rival Morrisey. 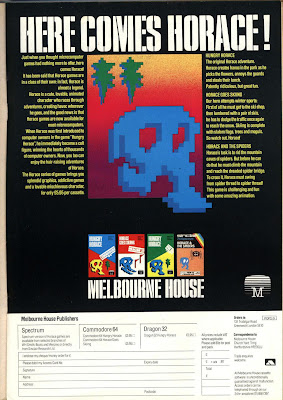 Cheer up, you pathetic little blob. You've got your own series of videogames, which I'm told is a great honour amongst your lumpy, hollow-eyed people. You're fondly remembered by quite a few people (myself included) who played your games in the early eighties. Sure, you're no Super Mario, but still - you should be happy with what you've got.
What Horace has, ladies and gentlemen, is a series of three games produced in the early 1980s, created by William Tang and developed by Beam Software. As you will see, innovation was hardly the driving force behind the Horace series. In fact, you could say that all the Horace games were shallow rip-offs of previously-existing games. 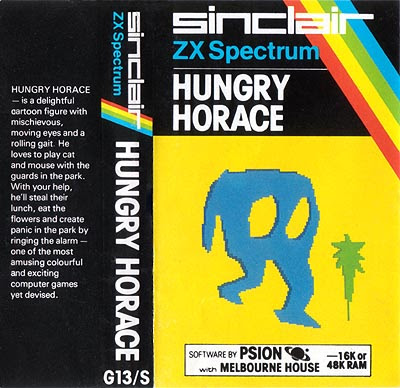 Hungry Horace is the first game in the series. See Horace's expression, vacant yet somehow filled with terrible sadness, as he stares at an unidentifiable green stain on the wall of his bright yellow prison. According to the blurb on the cassette inlay, Horace is "a delightful cartoon figure with mischievous, moving eyes": this is not true. Horace clearly has no eyes, just gaping holes set in his torso. No mischief there, unless locking yourself in the garage and running the engine of your car until the merciful fog coddles your brain into an eternal sleep can be considered mischief. 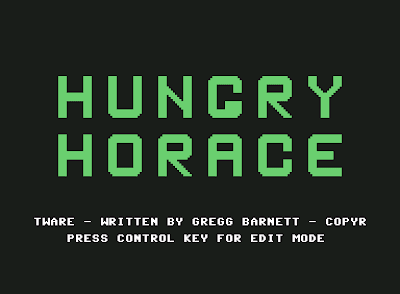 (Pictures taken from Commodore 64 version)
The game itself is simple: Horace wants to eat all the flowers in a park, because he's kind of a dick like that. There are wardens who chase him around. Yes, it's a Pac-Man clone. 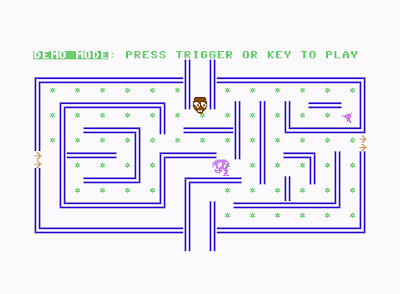 Wakka wakka wakka indeed. The green dots are flowers and not (as I first thought) tiny stars of David. I did wonder if perhaps Hungry Horace was a study of the Holocaust, with Horace trying to save as many Jewish families (represented by the stars of David) as possible before being caught by the Nazi brownshirts / park wardens. It's a futile task; the game is infinite and Horace can never win.
It's pretty decent for a Pac-Man clone from 1982, though. The Commodore 64 even had a level editor that let you save the mazes you created to tape, which is pretty neat. You'll need something like that to keep your interest levels high, though: I don't know how long Hungry Horace is, because I never got past the third screen. 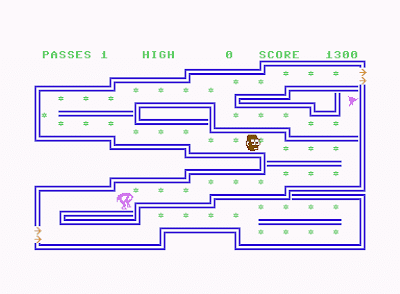 It's a one way path, and the wardens are slightly faster than you. You can't even lure them to the bottom corner, because another one turns up and you get stuck between them. I'm sure it is possible to escape this maze, but there are only so many seconds left in my finite lifespan and I'm not going to spend them playing this. 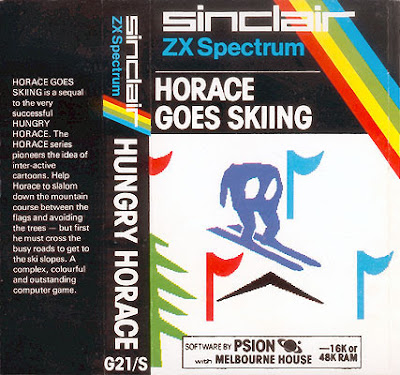 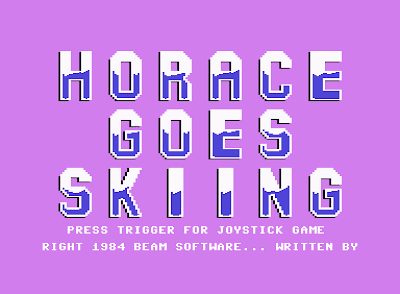 In which Horace takes to the piste. Before he can get his skiing on, he has to get his skis on. Unfortunately, some thoughtless prick has placed a dual carriageway between Horace and the ski rental place. 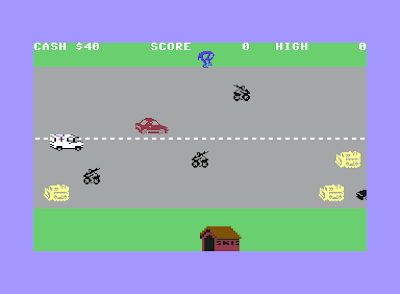 A ski rental place that looks like Snoopy's kennel, no less. This time it's a Frogger knock-off, although again, it's a pretty decent one. The best strategy is generally to wait for a gap and run straight forward as fast as possible, hoping one of the bikers doesn't swerve toward to you for no good reason other than their desire to see you dead. If you get hit by a car, the ambulance comes to get you and charges you $10 for treatment. Most gallingly, you still get charged $10 if you're hit by the ambulance itself. This epitomises Horace's misfortune: of all the vehicles that could have hit him during his suicide attempt, he collides with an ambulance. It's cruel cosmic jokes like this that are the reason for Horace's perpetually downbeat manner. 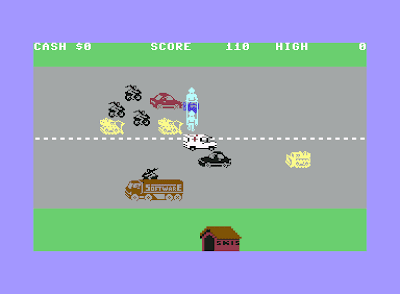 Run out of cash and you can't afford to hire the skis, making Horace Goes Skiing the only videogame where a "Game Over" can be achieved via having too little cash to rent out some sporting equipment. 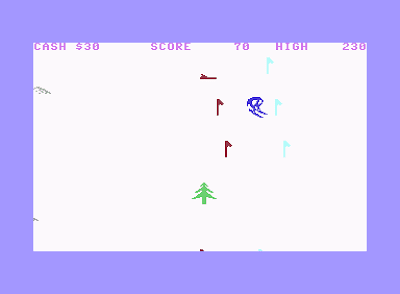 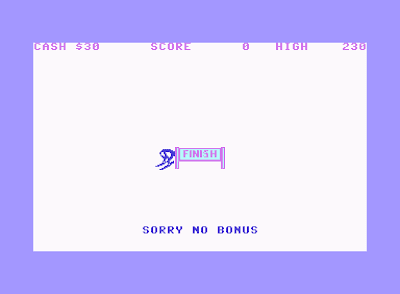 That screen just about sums Horace up, really. That must be the least sincere "sorry" I have ever seen. It makes me wonder why he even went skiing; judging by his expression as he flies down the slalom course, he'd rather be at home forming a noose out of ties and writing one final note.
Horace Goes Skiing is probably the best of the three - the gameplay's the most fun, certainly - but I'm probably biased because this, along with Wanted: Monty Mole, was the first videogame I ever owned, bought at a car-boot sale on a no-doubt cold and blustery Sunday morning.


Horace and the Spiders 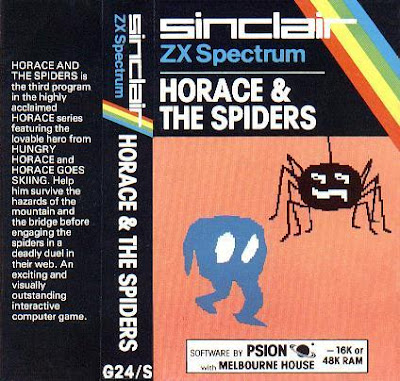 It might sound like the name of a novelty punk band, but Horace and the Spiders is the third part of the genre-busting Horace series. Unlike the others, it was only released on the Spectrum, but it makes up for this by being three games in one! 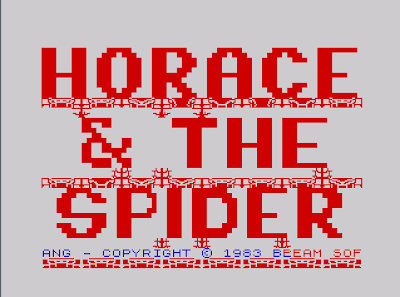 The title screen says "spider" instead of "spiders". Ignore it, it is a filthy lie. There are multiple spiders standing between Horace and his goal. 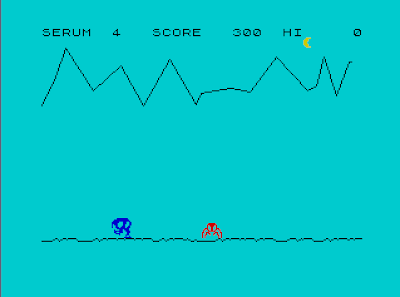 The first stage, and it's a platformer in the vein of Pitfall. Horace moves from left to right. There is a spider to jump over. You have a limited supply of anti-spider bite serum, and you will lose some if you hit the spider.
Just after the spider, there's a small incline. I personally would have given up and turned around upon encountering a small incline, but then I am a porky waster and not a dynamic action hero like Horace. You have to jump over the incline: if you touch it, Horace is killed and for some reason has to use the serum to resurrect himself, so either the spiders have coated every available surface with venom, or Horace is looking for an excuse to get out of his trip to Spider Mountain. Clear the poisoned incline and you'll enter... ... The Yellow Cave of Dangling Spider Threads. You mission here is to swing over to the other side using the threads dangling from the spinnerets of the spiders above. I'm not sure you can actually fall and die here: Horace only seems to jump when he's certain he'll make it, which seems like a good tactic to me. However, dally too long on the threads and the spiders will use their powerful sphincters to haul you upwards and kill you. Once you're over the gap, you'll reach... 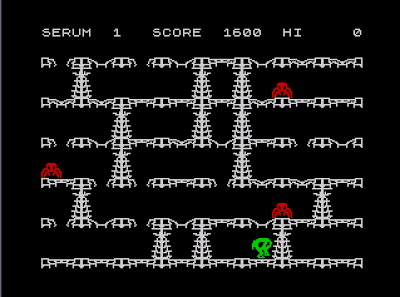 ... Another rip-off, this time of Universal's Space Panic. This is the final stage, and by far the most enjoyable; I mean, you might get a whole ten minutes worth of entertainment out of this one, assuming you're particularly easy to please. You have to stomp holes into the spider's webs and lure them into said hole, where you can finish them off by crushing them beneath your bootheel. That's Horace's whole mission here: as the manual says, Horace is "engaged in a hunt to rid the spider mountains of the deadly octopeds which inhabit them". No real reason for your brutal ways then, Horace? Once you've killed all the spiders, you return to the first stage. It has marginally increased it difficulty. This repeats forever, or at least until Horace can continue no longer and falls victim to the very spiders he set out to destroy.

That's Horace and the games in which he starred. Still the question remains unanswered: what the hell is Horace supposed to be? As a child and probably most influenced by Horace Goes Skiing, I always believed him to be some sort of Sasquatch come down from the mountaintops. He is torn between his sadness at the destruction of his beloved forest to make room for a ski resort, and his love of the downhill slalom. This, I thought, is the reason his gloomy expression. Now I am older and wiser, I am convinced that he's one of the Blemmyes, a legendary tribe of creatures who had no heads and whose faces grew on their chests: 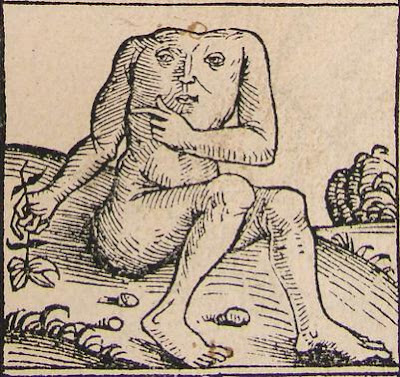 You'd be miserable too, if your eyes were where your nipples ought to be.
As for the makers of the Horace series, Beam Software, they continued to make games throughout the 8 and 16-bit eras, including the excellent Shadowrun and the SNES port of Super Smash TV. They were bought by Infogrames / Atari, and then sold on to Krome Studios. It looks like Krome Studios might well be on the way out, which would sadly be the end of Beam Software for good.
As for William Tang, Horace's creator... well, nobody really knows. He wrote a book about programming for the Spectrum: 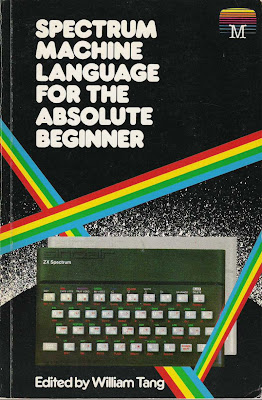 Man, when I look at that cover it's like I can feel the rubbery keys beneath my fingers. Tang also worked on the seminal Way of the Exploding Fist and an Asterix game. A new Horace game, Horace to the Rescue, was announced in 1985, but Tang apparently suffered a collapsed lung and the game was never released. William Tang pretty much disappears after that - I couldn't find any more information about him, anyway. I hope he's okay, because the Horace series gave me a lot of pleasure when I was a kid and I wouldn't want its creator to have died of a collapsed lung. If you've got any more information about the mysterious Mr. Tang, please let me know. 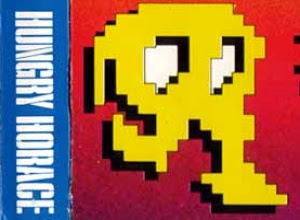 And that's the end of the Horace saga. Well, not quite: a game called Horace in the Mystic Woods was released for the Psion Series 3 line of PDAs, of all things, but I think that's a little obscure even for me. Horace, always hungry, lover of skiing, scourge of spiders: you were almost the Mario of the ZX Spectrum. I still don't have a fucking clue what you're supposed to be, though. If you're of an artistic bent and you think you can draw a picture of what Horace is supposed to look like, then please send it to vgjunk(at)hotmail.co.uk. If you really can't draw, have a go anyway - we'll just pretend it's a picture of him after being hit by that bloody ambulance. 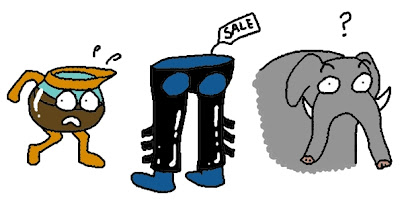 I personally favour the trouser option - it'd explain why he looks so miserable, at least.
MORE BONUS!
Thanks to Martin from Estonia for sending in this picture of his friend playing Horace and the Spiders! 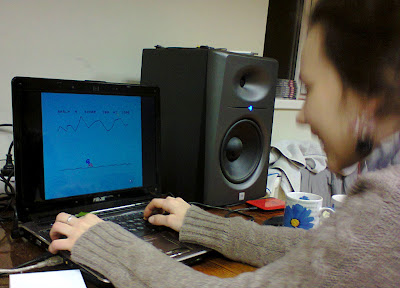 Horace all over the world - truly, a beautiful thought.
Posted by VGJUNK