MURDER SHOULD BE MORE FUN, AND WITH JOYPADS

Do you know what made the fine, upstanding member of the community that I am today? A near-constant diet of videogames and horror movies. Yes, I've been ingesting both these media for longer than I can remember, and they have yet to turn me into a cannibalistic mass-murderer, but that may change if the vision I am about to put forward ever comes to fruition.
You see, I love slasher films, and I love videogames, but the two have never really come together in a truly satisfying way. Each of the big four slasher franchises (Nightmare on Elm Street, Friday the 13th, Hallowe'en and The Texas Chainsaw Massacre) has had a videogame made of them at somepoint, and they are all invariably terrible. For example, here's the terrfying Jason Voorhees in the NES version of Friday the 13th: 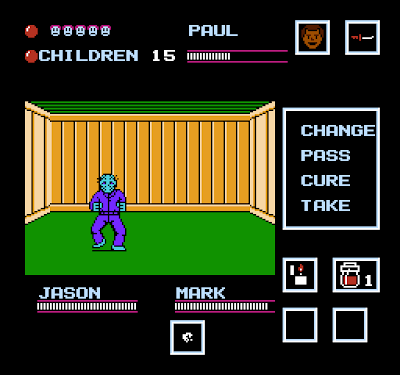 Yes, well. He's hardly very menacing in his lilac jumpsuit. I love the way he's holding his clenched fists at his sides, as though he's hopping from one foot to the other in excitement/anticipation/murderous rage.
There was a Texas Chainsaw Massacre game for the Atari 2600, too. If you have any sense, that sentence will scare you more than any film ever could. Here's some gameplay footage:

And so on. What I want to see is a modern slasher-film stlye videogame. A serial-killer sim, if you will. We probably shouldn't put that on the advertising, though. That's one of the problems with this kind of game though: people will object to the violence, but then again, is Nightmare on Elm Street really any bloodier than, say, MadWorld?
What I'd like to see is a game not based on any particular horror franchise, but rather one that takes all the various tropes of the slasher genre and uses them in the game. So, at the start the game you must create your playable monster. The choices you make at the start of the game determine the kind of killer you end up with. Why did they become a killer? Childhood trauma and mental impairment, a la Leatherface? A Freddy Krueger-esqe villain from beyond the grave? Religious mania like Carrie's mother? Their genesis would affect the way they play the game, whether they have supernatural powers or just like stabbin', whether they're more at home in a rural or urban environment, that kind of thing. You can choose their trademark weapon, too, and then it's on to the game.
The gameplay would be a kind of action stealth-em-up, I suppose, where you sneak around disposing of slutty teenagers and nosy strangers. Of course, you can't just machete every single one, oh no; we don't want the audience getting bored. So, you get points and prizes for mixing it up a bit. Sure, take the first few out with the knife, but then you start hanging them on mounted deer heads and trapping them in cages made of chainsaws. That'll get 'em scared! Bonuses will also be awarded for using typical slasher film scare tactics. For instance, you make your victim think you're hiding in the bath. They gingerly creep over, summon their courage and yank back the shower curtain to reveal... nothing. Then, just as they breath a sigh of relief, you step out from behind the door and bash 'em on the head with a spade. ONE MILLION BONUS POINTS AWARDED. If you can kill the teens just as they're about to start having sex, taking drugs or both, well, so much the better.
With the addition of an early-eighties VHS-cover design ethic and a John Carpenter soundtrack, this could well be the best game ever made. I expect the larger games companies to be knocking on my door any day now with offers of fabulous wealth. Until then, I guess we'll have to make do with Splatterhouse. Here's hoping the new one is the god-awful trainwreck I'm assuming it's going to be.
Posted by VGJUNK