"Johnson, get in here!"
"Yes, sir? What is it?"
"Have you finished that racing game yet?"
"Well, no, sir. We've got a working prototype but it's nowhere near finished and.."
"Yes, yes, but it's playable? Then we can start printing the discs."
"But sir, it's... it's awful. No-one in their right mind would buy this game..."
"Listen to me, Johnson. Do you know who buys videogames? Teenage boys."
"Sir, I'm not sure it's strictly teenage boys that bu..."
"Yes, that's right. Teenage boys. And do you know what teenage boys like, Johnson?"
"No sir."
"They like tits. Big tits, little tits, any kind of tits. And that's how we're going to sell this game. Get Hooters on the phone and send some people down there to photograph some of their girls. This game is going to be huge, my boy. Huge!"
"...Yes, sir."

And thus, Hooter's Road Trip was unleashed onto an unsuspecting world. 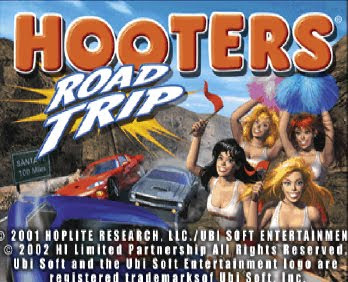 Yes, it's a Hooters-themed racing game. This is... not good. It was released in 2002 for the PS1 by a company called Hoplite Research, and once you've played it you will wish for the ghosts of a thousand actual hoplites to descend upon the creators and frighten them to death by doing, I dunno, whatever terrifying things the ghosts of dead Greek soldiers do.
The actual format of the game is fairly standard: It's sort of like OutRun, in the same way that Schindler's List is like Ilsa: She-Wolf of the SS. You pick a car and drive it from one location in the southern USA to another, and then another, and another, interminably, for ever and ever until you finally snap and stab a passing kitten. So, that'll be the Road Trip portion of the title, then. What is most certainly doesn't have in common with OutRun is its complete lack of any kind of redeeming features. For starters, let's pick a car: 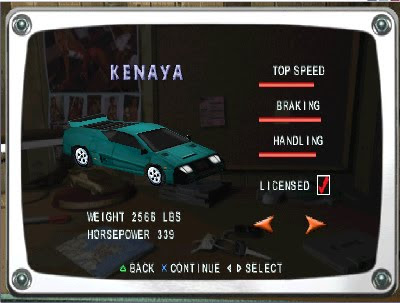 Oh dear. I'd like to point out that this game came out in 2002. To put that into context, Gran Turismo came out in 1997, and it's graphics looked like this: 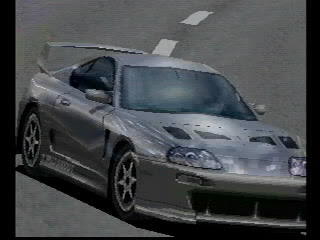 Yeowch. Well, maybe the cars don't look quite so much like they're made of badly-painted cardboard boxes during the actual gameplay. 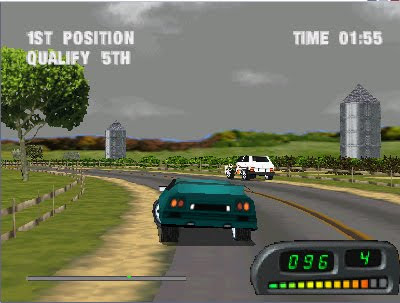 Oh no, they do. Well, that's unfortunate. And what of the gameplay? Well, it's pretty much exactly as terrible as you'd expect. The cars all seem to have been beamed down from some distant planet, some far-flung nebula where there is no friction or inertia and the cars (or Land-Boxes, as they are called there) slide around like they are made of wet soap. The slightest touch of the steering and the cars instantly begin fishtailing, and for some bizarre reason they all pull to the right when you're trying to drive in a straight line. Perversely, the car described as having the "worst" handling stat is actually the easiest to control because it doesn't slide around as much. It's a world gone topsy-turvy, I tells ya.
But you don't care about any of that, do you? You just want to see the girls. Well, okay then, you asked for it. Here's an example: 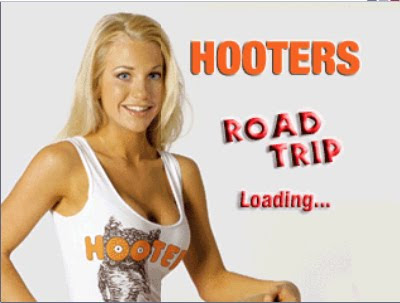 I bet she's called Debbie, or possibly Cindy. You actually get videos of the girls between stages. Their acting is so atrocious, it hovers somewhere between embarrasing and actually kinda sweet. 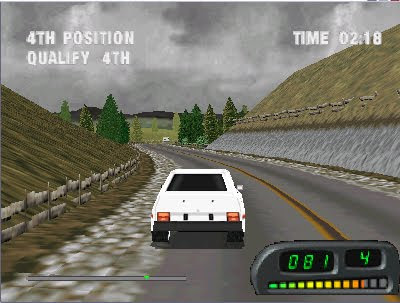 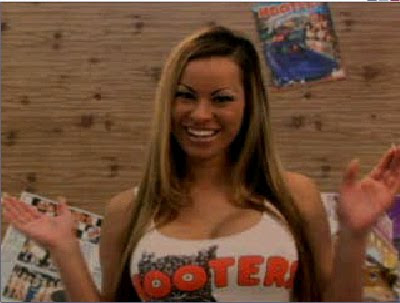 I've played a fair few bad videogames. Hell, I played the NES version of Dragon's Lair quite a lot in my youth. H:RT is truly awful, but it also made me feel kind of... dirty after I'd played it. Grubby you know, coated in a thick layer of grime that I can't scrub away. It's not very often a game make you feel like that. Is it the worst game I've ever played? I'm not sure, but it can be proud that it has secured itself a top-ten position at the very least. Any driving game where driving in a straight line is a difficult and frustrating task is never going to be good, but at least H:RT went for that extra "ick" factor. Full on, baby, that's how these Hooters' girls live.
Anyway, that's all I can bring myself to say about this travesty. Say goodbye, girls! 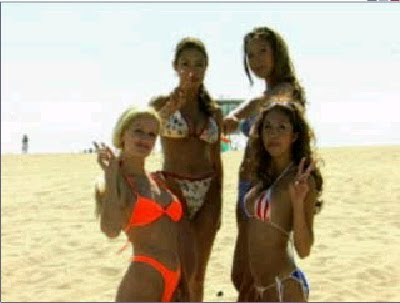 Ouch, you might want to have those artefacts looked at by a professional.

BONUS:
Do you want to see all of the cutscene for this game, you pervert? Well, here they are!

I love the bit at 1:39 where she says "Nice racing, champ" and sounds really sarcastic. Perhaps a woman speaking sarcastically about how good my performance was just strikes a chord with me.
Posted by VGJUNK