In 1993, Data East released a game called Dashin' Desperadoes, and it was met with pretty much no response of any kind. Well, yawns maybe. But I'm going to do my part to stop it simply going gently into that good night by writing this article. You'll all thank me when the post-apocalyptic survivors find this article and form the new world religion around a game about cartoon cowboys and their quest to please a vicious harridan. 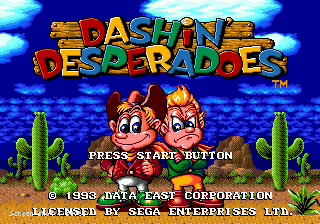 Before we start, I'd just like to mention the bit of speech at the start that says "Presented by Data East". Any regular readers will know I love little bits of digitized speech, and this is no exception. I think it's the way the announcer speaks like he's slowly, gradually being paralysed by the venom of some particularly unpleasant tropical spider. You can listen to it here. 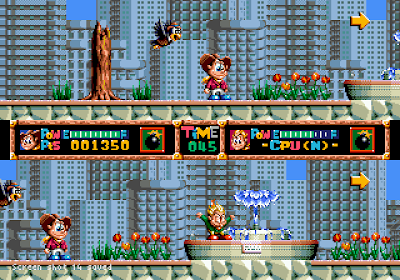 Anyway, the game itself is about running from one end of the stage to the other. Yup. You play as a cowboy called Will who has to race his rival, a cowboy called Rick, across the various obstacle-strewn stages. The reason they race? Well, it's because they want to get to a girl called Jenny. 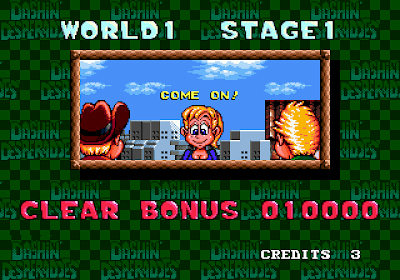 See, now, I have to take issue with Jenny. She clearly has some kind of sociopathic disorder, encouraging two men to risk life and limb by running through ever-more-dangerous landscapes simply to win her affection. Also, she makes out with whichever cowboy gets to her first. She's not fussy, the slut. 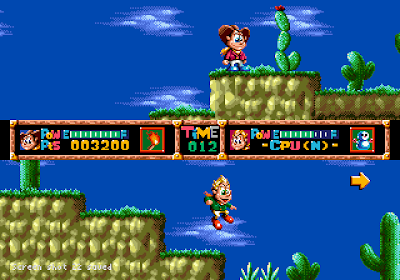 The gameplay in Dashin' Desperadoes is surprisingly good fun. Sure it's lightweight, throwaway fun, but it's still fun. The concept of a platform racer was not one that was mined particularly deeply, and on playing DD it did strike me that it seems pretty unique. Considering I've been playing videogames for around twenty years now, any videogame that feels unique is worth a look, frankly.
The basic mechanics are simple enough: You've got a jump button, natch; you can roll along for a short while in a sort of dash maneuver, and you can throw a weapon at your rival. Both players are completely invincible, but getting hit makes them stop for a while. So, the game boils down to running and jumping from one end to the other while trying to touch as few of the obstacles as possible. There are different routes to take in each stage, the general theme being that the higher-up routes are harder to get to but contain less obstacles.

You will learn to hate your rival Rick with the searing intensity of a thousand exploding stars, though. On any difficulty other than easy, the slightest mistake means failure, as Rick blithely jogs past you, effortlessly avoiding the hedgehogs/lava falls/crows/men opening doors that populate the stages while you seem to stumble into every obstacle around. His bombs seem to find you whereever you are, and his explosions last much longer than yours, I swear. He never misses a jump. In fact, if he's so perfect, why doesn't Jenny just have him!? What a dick. 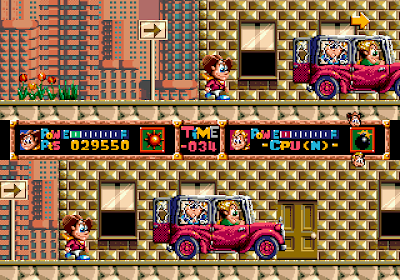 Rick's dickmoves grow in scale during the third stage of every world, where he kidnaps Jenny and tries to escape in some kind of vehicle, be it a car, a plane or a blimp. You have to chase behind him, throwing bombs at the vehicle until they stop. Bear in mind this happens every three levels, so during the course of the game Jenny gets kidnapped six times. That's well beyond even Princess Peach levels of kidnap: at least she usually manages to stick to one kidnap per game. Despite her protests during these stages, by the next level she is encouraging the cowboy's rivalry again. Jenny has serious mental issues. 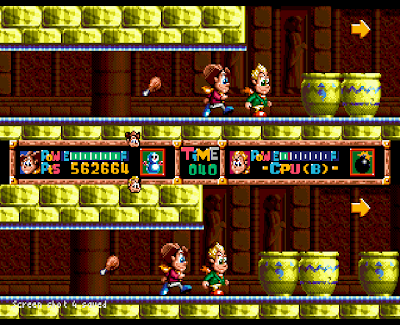 The music's pretty good too. The highlights are stage 2-3 during the blimp battle:

And stage 6-2, in the pyramid. The pyramid is full of lava. I presume the pharaoh wanted to take hundreds of tons of boiling rock with him into the afterlife.

So, all in all, Dashin' Desperadoes is not awful. It's fun while it lasts, the graphics are nice and the music is pretty good. More importantly, it's a bit different. In these days of bald space marines, that means something. I'll leave you with this advert, featuring the box art: (click for bigger)
Jesus, look at those mouths. They look like the Rice Krispies elves after seeing terrible... things in some distant war. And what's going on with Jenny's arm in the background there? At least the buzzard looks happy...
Posted by VGJUNK