When I was a kid, back in the days of the mighty SNES (and the slightly less mighty MegaDrive), the aquisition of a new game was a rare event indeed. New games usually only arrived at Christmas and on birthdays, but evey now and then I would be presented with a game out of the blue. Sometimes this turned out very well (like Megaman 3), but more often than not, the no-doubt well meaning family member had bought me an absolute dog, like Mindscape's 1993 debacle Pierre Le Chef is Out To Lunch. I hate this game deeply, but in the interests of therapy, I decided to have another go at it. If nothing else, this article can serve as a warning to anyone foolhardy enough to attempt to play this unmitigated dreck. 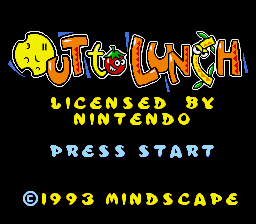 First of all, just look at the box art: 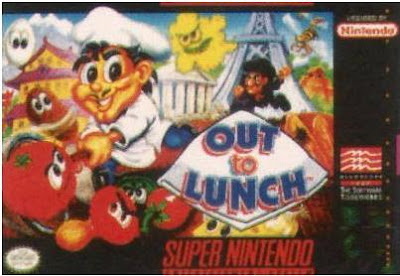 That is not the face of a man I want to spend my time controlling. That, ladies and gentlemen, is the face of a date rapist. Why isn't he looking at the anthropomorphic tomato he's trying to catch instead of staring out of the screen at me, the creepy bastard?
Anyway, the basic premise of the game is this: You play as a French chef, and you are dropped into a nightmarish environment of floating platforms, where you must capture various ingredients with a butterfly net and dump them in cage. It is never explained what terrifying cataclysm caused all of Pierre's ingredients to come to life, but I'm going to assume it involved the Large Hadron Collider.
You start off in Switzerland. Wait a minute, isn't that where the Large Hadron Collider is? 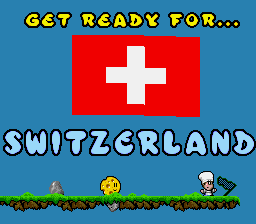 Get ready for Switzerland, indeed. So, the level starts, and you have to go and find your food-catching net. Oh, sorry, didn't I mention that you have to go and find all your items, including the THE GODDAMN NET at the start of every single stage? Well, you do. Once you have it, you can start catching the food: just make sure you don't touch the food, because it hurts you. Wait, what? What kind of chef gets hurt BY TOUCHING FOOD!? You would think such a condition might rule you out of the food service industry, but what the hell do I know? Right, food collecting. There's cheese and eggs and tomatoes and what I though was a boulder throughout my childhood but it turns out to be a potato. The world of food preparation truly is a mysterious one. 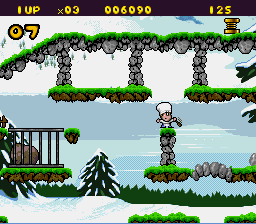 Once you've got the required amount of food in the cage, a magic door opens to take you to the next level. If you hang around once you've put some food in the cage, some other French prick turns up and lets it out again. In a shocking outburst of originality, he is called Le Chef Noir. If you do have the misfortune to play Out To Lunch, you will want to stab him in his smug French face. Just go to Tesco like everbody else, you pair of fucking dicks. 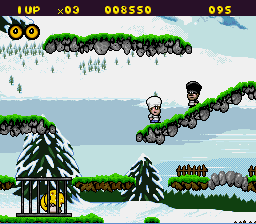 If you take too long to finish the level, the screen fades to black in a mushroom-shaped silhouette. I like to believe that this musroomy vortex is dragging Pierre into the furthest, darkest reaches of Hell, a place of unspeakable torment from which he will never escape.
You can also get a fruit bonus. I'm not going to make a joke about that, though. The level design is like a greatest hits compliation of terrible game-making decisions. Now That's What I Call Frustrating Bullshit, if you will. There are invisible traps, identical walls that you may or may not be able to walk through, overly-slippery ice platforms... oh, and the music. The terrible, terrible music, music that will drill through your skull like a jet-powered termite and melt your god-damn brain, and not in a good way. 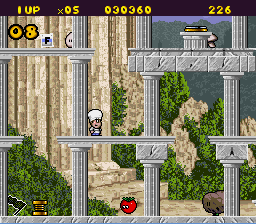 Eventually, you get to go to other countries. They are all equally terrible. This time, I only managed to get to Greece before I gave up. I vaguely remember France being the last level, and I think China and Jamaica were in there too. But if you're thinking of playing the game to see that, please don't: I don't want to be held responsible. Pierre le Chef? Pierre le Douche, more like. Catharsis is a beautiful thing.

PS: Up until today, I though the game was just called Pierre le Chef. It isn't.