It's a bug hunt! Yes, in a similar vein to my Batman Sprites article, here's a rundown of some of the many pixellated representations of H. R. Giger's most terrifying creation.
Alien 3, 1992, NES, Probe

Sleek and midnight blue, the Alien from the NES version of Alien 3 actualy looks pretty darn good. Despite the limited graphical capabilities of the NES, they really captured the look of the "Dog" alien from the film. Although, now that I look more closely, it looks like it has a pistol on the tip of its tail. As if Ripley didn't have enough to deal with.
Alien vs. Predator - The Last of His Clan, 1993, GameBoy, Activision

What a cheerful-looking acid-spitting nightmare from space! He looks like he's fairly skipping through the levels in search of his prey. He really doesn't look all that threatening, sort of like a Muppet Babies: Alien Edition version of the Xenomorph, his pixellated face betraying the merest hint of a smile.
Aliens, 1986, Arcade, Konami

I wonder why the bright pinky-purple Xenomorph didn't catch on? Possibly it's his odd stance, looking like he's praying to some Alien god, possibly asking to be granted a second leg so that he might chase down his prey more effectively. Actually, he looks like he's performing injury-prone English rugby bloke Jonny Wilkinson's famous pre-kick pose: 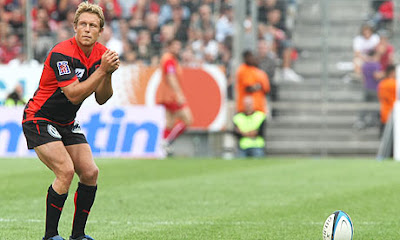 If I knew anything about rugby, I'd make some kind of pun here. Instead, I'll point out that the Alien's tail doesn't look like it's in the best condition. It's all... pink. And floppy. Eww. To make you feel better, here's a picture of the awesome-looking Powerloader from the same game: 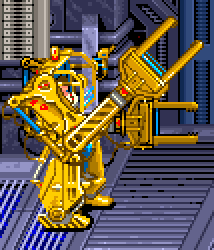 The MegaDrive Alien looks strangely muscular, with big beefy thighs and no neck. He's the steroid-abuser of the Alien world. I bet he picked on the Chestbursters at school, stealing their dinner money and flushing their heads down the toilet. What a prick.
Alien vs. Predator, 1993, SNES, Activision 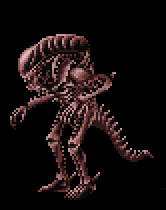 A very skeletal-looking Alien here. Maybe the developers thought that Aliens weren't scary enough, so they made them undead. Undead Aliens. Yep. He's a bit of a pixellated mess, to be honest. I think it's the strange stiff-armed pose that makes me not like him so much. He looks like his arms are made of coathangers!
Alien vs. Predator, 1994, Arcade, Capcom 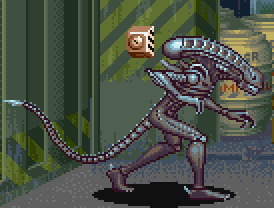 The greatest of all Alien-based videogames, Capcom's AvP is a true classic. Just look at that Alien! A true masterpiece of spritework. Everything about it is perfect. I... I think I'm in love. Seriously though, the graphics in AvP are pretty much perfect. I only wish more games looked like that. What you can't see is that they're equally well animated, scuttling around on the floor like they bloody well should. In fact, see for yourself. !WARNING! Video contains dangerous concentrations of BAD-ASSERY.
Well, that's all for today; it's time to take off and nuke the site from orbit. It's the only way to be sure.
Posted by VGJUNK