If you're the kind of person who craves accuracy in all things, even videogame titles, then look no further than Konami's 1989 side-scrolling beat-em-up Crime Fighters. Try and guess what it's about! 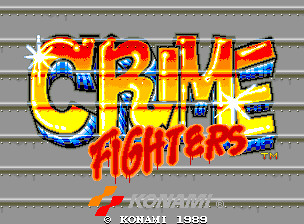 As the title implies, you play as a guy who fights crime. That's fight in the most literal sense: you find some crime, walk up to it and punch it in the face. No arrest targets or rehabilitation here, it's just face-punching, groin-kicking and stomach-knifing. You play as an undercover cop who, given that this is a side-scroller from the late eighties, is almost certainly called either Billy or Jimmy, a man given the task of rescuing a bunch of women that have been kidnapped. It follows the standard beat-em-up template; walk across the stage, beat up some guys, get to the boss, next stage. Crime Fighters differs slightly in some regards, however. For one thing, there's no jump button. For someone like myself who completed the Teenage Mutant Ninja Turtles arcade game through near-constant use of the jumping kick, this takes a while to get used to. You have a punch and a kick button, and pressing them together makes Billyjimmy perform a jumping knee attack or a backwards sobat-type thing. The game also makes the most of the kick button by letting you kick downed enemies; in fact, the first time you knock down an enemy the game places a large "KICK!" icon over the poor sod. This game really wants you to kick people while they're down, and I certainly got some pleasure from doing so. Perhaps all these videogames have made me a sociopath after all. 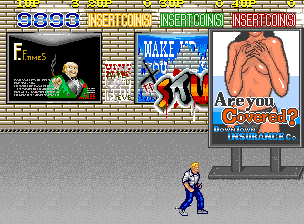 Crime Fighters also has punks. Lots and lots of punks. The majority of enemies are punks, and they menace you while performing cool punk actions like strutting around with their hands in their pockets and constantly fixing their hair. What did videogame developers of this era have against punks, anyway? Almost every side-scroller from this time (the ones set on modern-day Earth, anyway) features punks as enemies. I can only assume that the developers, influenced by various American media, realised that a "punk" is someone who you might well have a street brawl with, but they didn't know it was a more general term that means a scummy person and not just someone with a love of the music of the Sex Pistols or Rancid. So, thugs in Crime Fighers, Streets of Rage, Final Fight, etc are depicted as mohawk-sporting, leather-jacket-wearing, punk-music fans, as opposed to just "Street-punks". Also, giving them mohawks and safety-pin piercings makes them more visually interesting than if they were just slightly dodgy-looking geezers, the kind of men who try and sell you stolen kitchen appliances in run-down pubs. Of course, I might be reading too deeply into the popularity of punks as enemies in this period. Perhaps these days, all the cannon-fodder enemies would be chavs.
Anyway, Crime Fighters has eight stages, and here's a quick rundown of them all:
Stage One: Subway 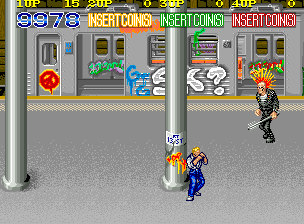 You start off in a subway station, fighting, you guessed it, punks! The backgrounds are nicely detailed and full of graffitti, and theres a large sign featuring a topless woman and the slogan "Are You Covered? Downtown Insurance Co.", which I can't believe has never been used in the real world. Eventually a train rolls in, and the boss gets out. Yes, you guessed it, he's a punk! A super-punk, no less, with a mohawk to challenge the very mohawks of the Gods. He swings a club at you until he gets dizzy and stops, giving you the perfect opportunity to batter him.
Stage Two: Subway Train 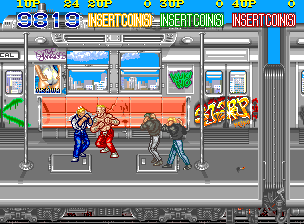 Ah, the subway train, a beat-em-up stage almost as ubiquitous as a lift full of enemies. The graffitti theme continues inside, as well as some animated posters, all of which appear to be advertising swimsuits. That's some pretty advanced technology just to sell a few bikinis. Some of the punks have weapons, mostly limited to lead pipes and knives, which are used with a particularly brutal-looking stab in the guts. There's also a big guy who swats you into the background, causing to flatten into the wall with an accompanying Looney Tunes-esque sound effect, and the vicious shankings and slapstick violence make for fairly disturbing bedfellows. The boss is a Jason Vorhees rip-off in a hockey mask who tries to cleave you with his mighty axe, only for it to get stuck in the floor and give you the opening you need to kill him.
Stage Three: City Streets. 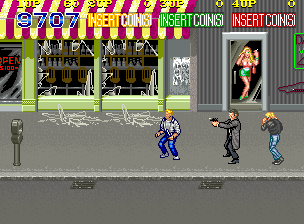 The first thing I noticed was a sign in the background advertising something called "Krakus Ham" (only $1.49!). I have no idea what krakus ham is, but I'm sure it's delicious. There's a cinema; I can't read what's playing, but it does say there is "parking at Wilshire and Crescent", which I guess means that Crime Fighters is set in Los Angeles. You can get a gun from one of the enemies here, and it's much better than trying to shiv people, what with the ropey collision detection and all. Our hero sees a woman in the doorway of a stripjoint, goes over to try and (one assumes) simply say hello and pass the time of day, but a large man opens the door and flattens you against the wall. The boss is a large biker-type fellow who is drinking petrol straight from the pump, which sure is one expensive beverage. Just have a Coke, my good man! The petrol doesn't seem to have done him any good, and he's easy enough to beat.
Stage Four: Underground Construction Site 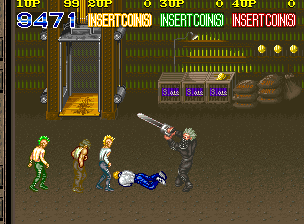 A fairly bland stage, this. There are punks, and steamrollers, and more punks. Yawn. The boss is cool, though: he's a chainsaw-wielding psycho who seems to be a combination of Jagi from Fist of the North Star, Mad Max and Leatherface. He's an arse to fight, though, as he repeatedly leaves his chainsaw in just the right position so that you get hit as soon as you stand up. This is deeply frustrating, and sadly it becomes something of a common theme with the bosses from now on.
Stage Five: Rooftops 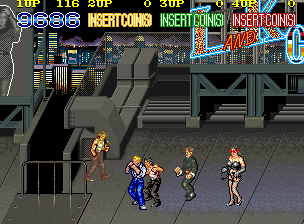 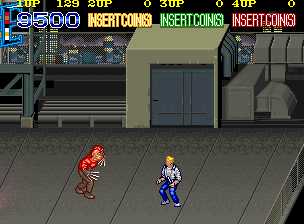 Stage Six: Back Streets
Another slightly tedious stage. The most striking thing about it is the sheer amount of times you get to stab punks. The boss is a boxer with some super-fast punches, as well as the previously-mentioned ability to hit you before you can get up properly
Stage Seven: Docks
Tired of stabbing punks, our hero moves on to kicking dogs in the face. Truly, a hero for our times. The stage is short, and most of it is taken up by the boss, a large G.I. who must have really mastered C.Q.C. (counter-balance the knife, etc, etc,) because it's nigh-on impossible to hit him without getting hit several times yourself. He's a contender for "most irritating boss" title at my own personal Bad Videogame Moments awards ceremony, the trophy for which is in the shape of a joypad being thrown through a television. I hope he can conceal his disappointment when he loses out to all the bosses from Ninja Gaiden. When he eventually dies, he recreates the famous pose from the cover of Platoon. I hope he hasn't been saving that up for his entire life, because it's not as impressive as I suspect he thinks it is. 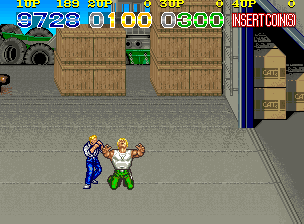 Stage Eight: Factory
The final stage, and as you would expect the game throws everything at you. The kung-fu warriors are out in force, and are as frustrating as ever. There are more goons with guns, and they take pot-shots at you while you're fighting the kung-fu guys, as if they weren't bad enough. Eventually, you reach a cage full of the captured girls, and a limo arrives. Out steps the final boss, who appears to be Duke Nukem after joining the CIA. He's got a gun, and he's not afraid to use it, and his constant grin gives him that added air of menace. He's tough to beat, but eventually he falls and you can free the lovely ladies. 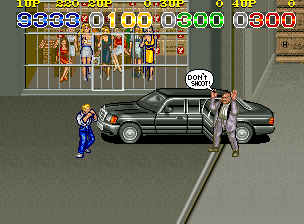 But wait! The true final boss, a rather disappointing-looking fat chap, steps out of the car, throws out the key to the cage and says "Don't shoot!". When you go to pick up the key, the treacherous swine grabs a machine gun and attacks. Then follows one of my favourite final boss battles of all time. All you have to do is dodge the guy's bullets for long enough that you can land one punch on him; when you do, he falls to the ground, and the game forces you to kick him to death. That's right, once you knock him down, the only thing you can possibly do is kick a man to death as he begs for forgiveness. Thanks a lot, Konami. That's a black stain on my soul that will never be erased. 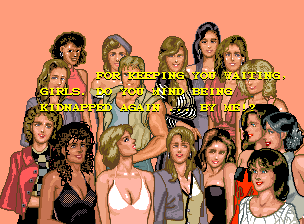 At least it's a happy ending for the women in the cage. Jimmy/Billy sets them free, and you get a nice graphic of him surrounded by the many ladies. He just can't restrain himself, though, and he says "Sorry to keep you waiting, girls. Do you mind being kidnapped again... by me?" The smiles on the women's faces seem to suggest that no, they don't mind at all, and Jimilly's incredibly cheesy line looks to have paid off. Seriously, when will he ever get a chance to use that line again? I say fair play to him. But that's still not the end of the game. As a bonus, there's an extra stage after the credits where you have to fight all the bosses at once. It's nigh-impossible, frustrating and tedious, and I suggest you just skip it. Okay, now the game's finished. I promise.

Crime Fighters has it's problems. The collision detection is fairly atrocious, the stages are short and the bosses can be simply unfair, which really gets on my wick. But it redeems itself with its cool boss designs, detailed background, good music and the ability to kick enemies in the balls, complete with a little "ding!" sound effect. Overall, worth a playthrough, as pretty much every Konami arcade game is.

Bonus!
The American arcade flyer for Crime Fighters went down the rather unfortunate route of using real live humans to advertise a videogame. The results are... not great. 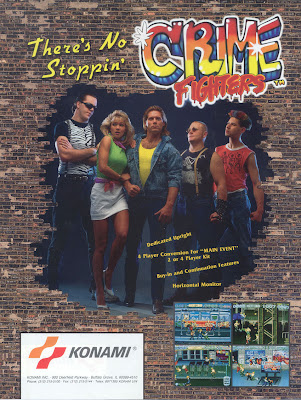 (Flyer courtesy of The Arcade Flyer Archive. Click the pic for a larger view.)
If those bricks are to scale, they're either tiny bricks or GIANT HUMANS. The guy on the left looks filled with disdain, as though all the others are not nearly as good as him at depicting an eighties street punk. I wonder where these people are now?
Posted by VGJUNK