The Shoot-Em-Up week continues, and I'm moving away from the fast-paced action and glorious pixel graphics of Air Gallet to something far more primitive and far more important: Konami's pioneering 1981 arcade shooter Scramble.

It's Scramble's 30th birthday this year, which I think makes it the oldest game I've talked about on VGJUNK, just edging out Hungry Horace. Thirty years old! To put that into context, Scramble was released less than a year after the paleolithically ancient Pac-Man, and around the same time as Galaga. It was a time of games that would be considered almost unbearably basic by today's standards - but it was also a time of massive innovation, and that's where Scramble comes in. 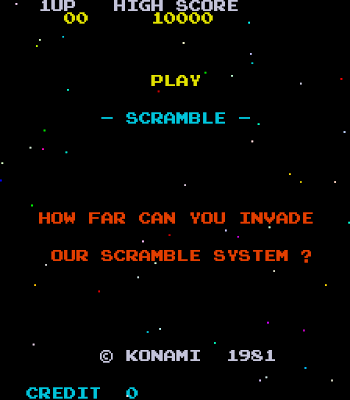 Here's a hint: not very far.
Scramble certainly looks like an arcade game from the early eighties, with bright neon landscapes and black skies filled with multi-coloured stars. You've got a craft that seems to be a spaceship but is referred to as the "jet". Lasers fire with a "pew pew pew" sound effect. Seems normal enough, but get this: it scrolled. 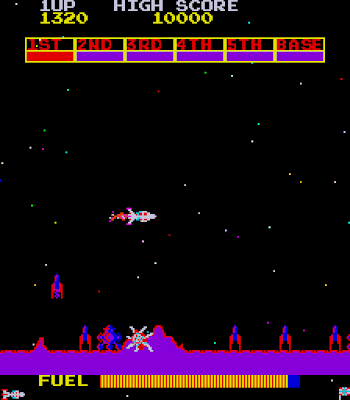 Okay, so Scramble wasn't the first shooter to feature horizontal scrolling: Williams' Defender was released the year before. However, unlike Defender the scrolling in Scramble isn't determined by the player's movements, and instead the screen scrolls constantly, pushing you along. So, as far as I'm aware Scramble is the first ever game in the genre we now think of as the horizontal shoot-em-ups. 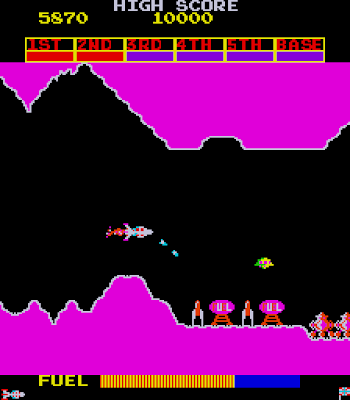 As a gameplay experience, Scramble will be instantly familiar to anyone who has ever played a shoot-em-up. You control the Jet, a vehicle with all the durability of a matchstick model, and you fly around blowing up enemies and invading the scramble system. You've got weapons - two of them, in fact. There's a forward-firing gun, and you can also drop missiles the travel downward in an arcing path. Unlike Space Invaders or Galaga or any other shooter of the time, Scramble forced you to constantly keep moving through a series of discrete stages, another innovation that would pave the way for shoot-em-ups as we know them today. 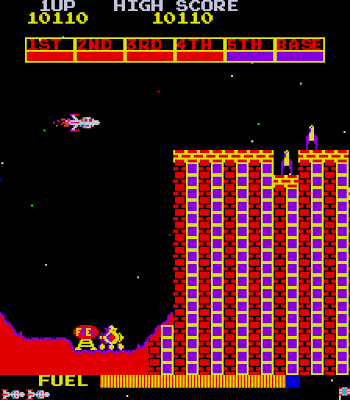 They may not have names or bosses at the end of them, but Scramble definitely has stages. You start off travelling over the hilly landscape as enemy rockets try and blast into you from below, before moving on to a cave with fast-moving UFOs and indestructible meteors. In these cave levels, with your missiles destroying ground targets while you shoot UFOs, Scramble's status as Gradius' ancestor is strikingly apparent. Then you're tasked with navigating a series of narrow corridors, and finally you have to destroy the "Mystery" object which is awkwardly located at the bottom of a difficult-to-target valley. Once it's destroyed, you've completed the loop. 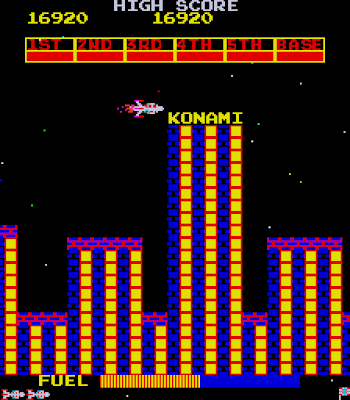 Of course, this being an arcade game from 1981 you never actually finish the game, you just keep performing the same loop forever. Except in Scramble you don't go on forever, because there is a fuel gauge. It constantly depletes as you play, and the only way to refill it is to destroy the fuel pods that litter the stages. Quite how this is supposed to work I couldn't tell you, but I'm going to drive over a petrol canister later and see if the fuel gauge goes up. I'll let you know how that works out.
Keeping your fuel full is tricky enough at the start, but each time you successfully complete a loop of the game your fuel gauge depletes faster, and faster, and faster, until eventually you can reach a point where staying alive becomes impossible due to a lack of available fuel. Not that it matters, because you'll be long dead by then. 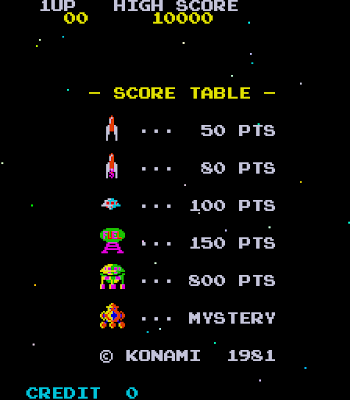 Yes, Scramble is hard, really hard, painfully and demoralisingly difficult. But what did you expect? It was never going to hold your hand and whisper sweet nothings into your ear, now was it? Hitting enemies with the missiles is hard enough, but I think it's navigating the narrow passageways that's the real hair-tearer. That said, there's still fun to be had with Scramble - the ship handles well and if you're looking for tight and claustrophobic gameplay, (stemming from both the combat and the rapacious demands of your fuel meter,) then it's worth trying it.
My problems with Scramble, difficulty level aside, are aesthetic. I know bright primary colours on a black background was simply the best that could be done graphically in the early eighties, and I'm fine with that: what I'm not fine with is Konami's baffling decision to have the colours suddenly change every thirty seconds or so, making the scenery look like a kaleidoscope with attention deficit disorder. More unfortunate than that, but completely understandable, is the lack of any music during gameplay. A petty complaint, I know, but if there's any genre I associate with excellent music it's shoot-em-ups and Scramble feels sort of barren without it. You don't know what you've got 'til it's gone, I guess. 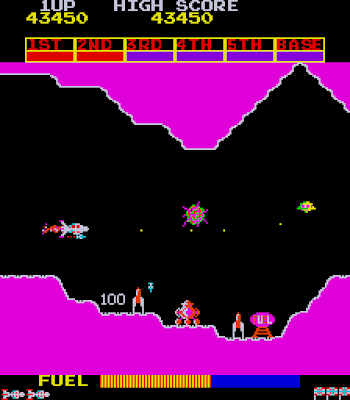 It was a great game for the time, and still playable now, but obviously Scramble's legacy is as the precursor to Gradius in particular and side-scrolling shooters in general. Konami's position on Scramble's status in the Gradius timeline is uncertain, although at one point it seemed to be classified as a Gradius prequel. Notably, it appears in the intro to Gradius Galaxies (AKA Gradius Advance) as the first entry in a timeline of the series as a whole. 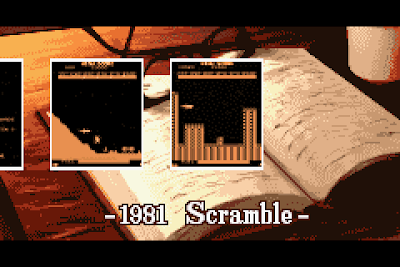 So, Scramble's impact was a large one, and certainly deserving of a place in the VGJUNK Shoot-Em-Up Week. If you take nothing else away from this, just remember to give thanks that Konami removed the fuel gauge from their later shooters. 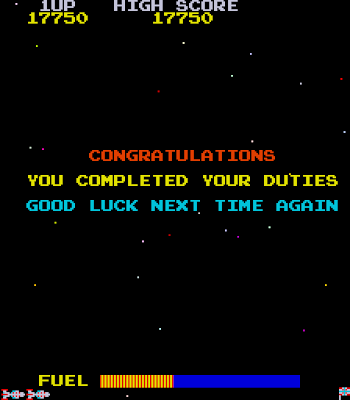 Before I go, a couple of mysteries. Firstly, at a time when any moderately successful coin-op was ported to every home system under the sun - just think how many ports Donkey Kong received - Scramble barely escaped from the arcade. Someone better informed than I can probably clarify this, but as far as I'm aware the only official port at the time was for the obscure Vectrex system. 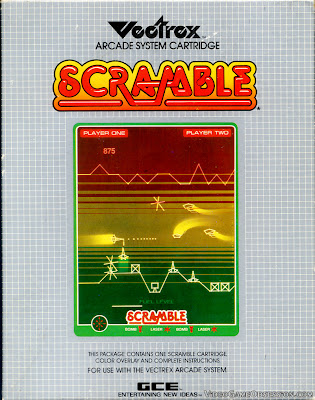 There were a few unlicensed... recreations, shall we say, like the Commodore 64's almost insultingly unchanged Skramble. Why did Scramble get so few ports? I can only imagine it was down to the home systems of the time being unable to recreate the smooth scrolling of the arcade version. It's a bit of a shame, because I think Scramble would be held in higher regard if it had been more readily available to those of us too young to be hanging out in the arcades. 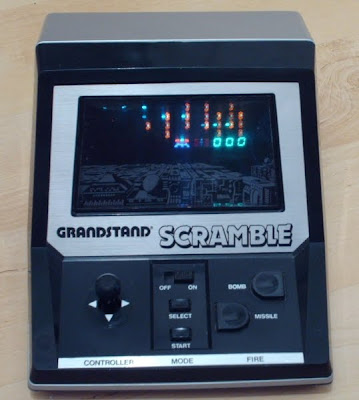 Oh, and there were a few tabletop and hand-held version released, including the extremely cool-looking VFD version pictured above. Cool-looking yes, but no doubt terrible to play. 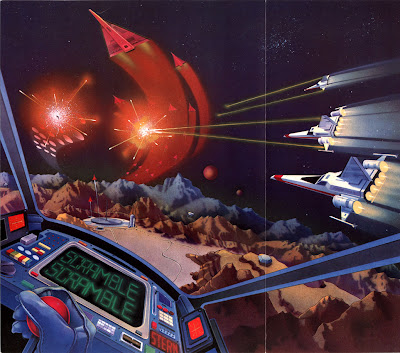 Finally, and this is the most important one: who the hell made Scramble? Yes, I know, Konami. But who specifically? There must have been a programmer, and presumably it's someone who also worked on Gradius. However because Scramble is unwinnable and therefore doesn't have any post-game credits, combined with a general lack of attribution in games of the time, it's very difficult to find out who was the brains behind the game. That's how I'm ending this Scramble article, then - if you know who the creator was, let me know at the usual address.
Posted by VGJUNK