As I'm sure I've mentioned before, I'm bad at shoot-em-ups. Really bad, in fact, with the reflexes of a lobotomised manatee and joystick skills to match. This feels like a poor position for someone who writes about videogames to be in. So, I've decided to try and rectify this and get better at shooting them up - and what better way to do that than by playing a whole bunch of shoot-em-ups? Aside from some kind of experimental Virtual-Reality training like something out of Lawnmower Man, I don't think there are any. Some kind of cybernetic implant, maybe? I don't have the money for that! Instead, I'm declaring this the first VGJUNK Shoot-Em-Up Week, and I'll be starting with Gazelle / Banpresto's 1996 arcade jet-fight-em-up Air Gallet. 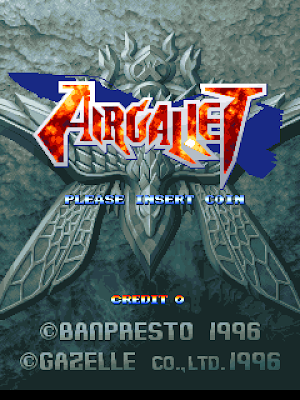 I have no idea what the title means. According to the dictionary a gallet is a small chip of stone, which doesn't really tie into the theme. Of course, it could be "garret", given the indistinguishable nature of Ls and Rs in Japanese. Oh, and the announcer calls it "Air Garret" during the attract mode. So, I guess the game is actually called Air Garret, but as a garret is a room located directly under a roof that doesn't make much sense either, unless the plane also doubles as a loft apartment. 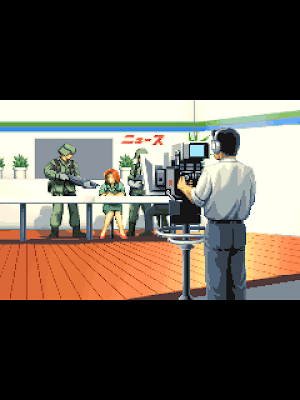 Plot-wise, Air Gallet is simple enough - an evil organisation is taking over the world, destroying major cities and forcing newsreaders to read their bad terrorist poetry live on air. Only one man (or two, men if you're playing with a friend,) can stop them: our unnamed hero and his souped-up jet fighter. 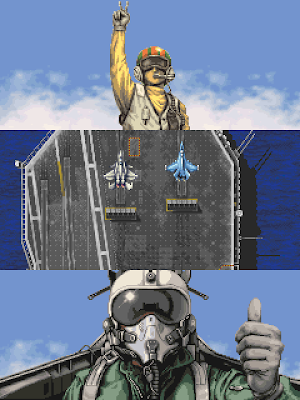 You get a nice intro sequence showing you launching from an aircraft carrier, complete with a lot of chatter from you comrades in the form of voice samples. There's a lot of speech in Air Gallet, and surprisingly it's all fairly well acted. The best speech comes at the title screen, where a voice announces that "Air Gallet will blow your socks off". A bold claim indeed, so let's take off and see if Air Gallet can live up to its own promises. 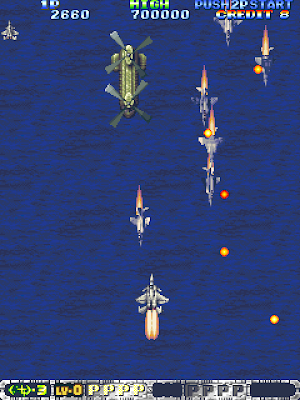 As you can see, it's a vertically-scrolling aircraft shoot-em-up (as opposed to a spacecraft or a cutesy witch or something) in which you fly around in what is apparently a modified F-15 and blast everything that moves. The controls are standard, and when I say standard I mean there's one button to fire your normal weapon, one button to fire your limited-ammo superweapon, and the stick moves you around. Simple indeed, and I think Air Gallet will be a good place to start shoot-em-up week due to its stubborn refusal to add anything even vaguely original to the shmup formula. 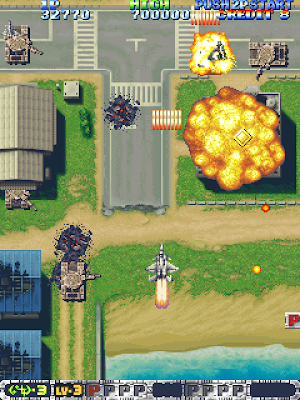 Still, who cares about a lack of innovation - just look at those graphics! If you're a fan of pixel graphics, then you're in for a treat here. To my mind, arcade shooters of the mid-to-late 1990s offer some of the finest pixel graphics ever created, and Air Gallet is certainly up there with the best. It's all about the detail, and the graphics here have plenty of that, at least once you get past the slightly bland opening section. 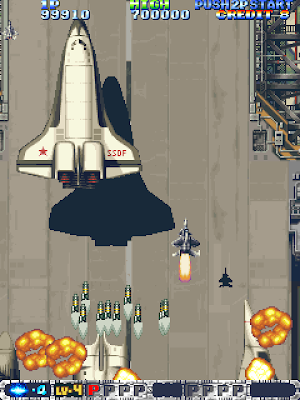 Definitely not bland is the first boss, a battle-ready space shuttle that blasts off as you approach it. This should have been NASA's response to the closure of the space shuttle program; load Atlantis up with guns and make it dogfight with military jets until it either a) gets destroyed, thus avoiding the indignity of becoming a museum piece or b) escapes into outer space, communes with a vast alien intelligence at the heart of the galaxy and becomes sentient. Then it waits, out there in the void between the stars, waiting for its chance to return to Earth and destroy those that created it. 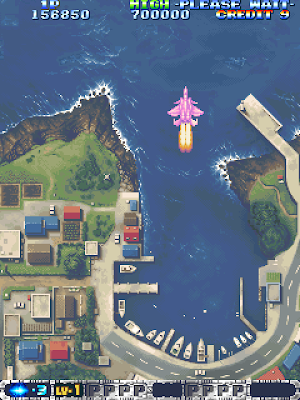 Anyway, back to the mechanics of the game. Your plane explodes at the slightest contact with an enemy or bullet. This is as you would expect. Yes, it can fire a huge amount of bullets/missiles/lasers and yes, I always wonder why whoever designed your plane didn't try and do a more balanced job when it came to prioritising attack and defence. I think I could live with a few less missiles if it means that a bluebottle colliding with my cockpit didn't result in my immediate fiery death. 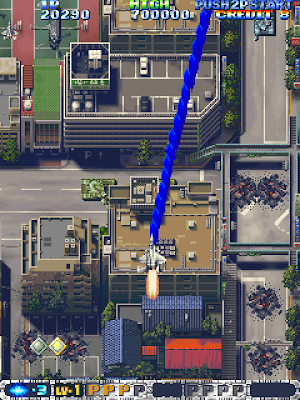 Weapons-wise, you have four options. Well, I say "options" but in practise it's not so simple. You see, your weapon is determined by collecting a power-up that is constantly cycling through the available weapons. Pick it up when it's blue and displaying the letter L and you'll switch to the laser weapon, for example. The problem with this is that when you're trying to singly-handedly take down the most well-equipped army ever raised, things get a little hectic and you end up accidentally picking up the weapon change, which can be a bit of a bugger. Powering up the weapons is simple enough: collect five of the "P" icons and the level of your weapon increases 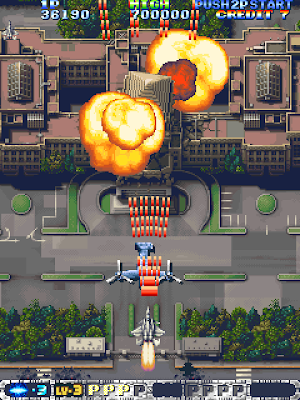 The weapons themselves are a weak shot combined with a barrage of missiles, a spread-pattern vulcan shot, a powerful but narrow laser and something that is misleadingly called the "Hunter Seeker". It's misleading because it neither hunts nor seeks, and is in fact an Option-type weapon that changes position relative to the movement of your ship and can be locked in place by holding down the fire button. While it's not so bad during the stages themselves, if you accidentally pick up the Seeker before a boss fight then you're in for a world of hurt: its piddly shots seem to bounce harmlessly off the boss' armoured shell, and you're dragged into a long, hard slog. 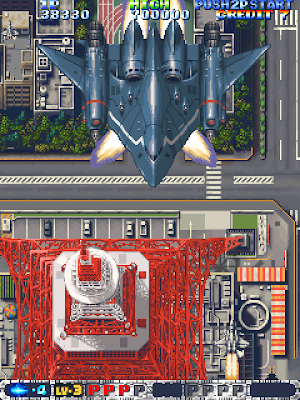 Here's the second boss, a stealth bomber that you fighter around the Tokyo Tower. In a nice touch, the perspective of the tower shifts as you fly around it, although you don't really get to appreciate it as you fight for your life. That brings me nicely on to the difficulty level, which is high. Well, the first two stages weren't too bad, and even with my sub-par shooter skills I managed to get through them without using a continue. 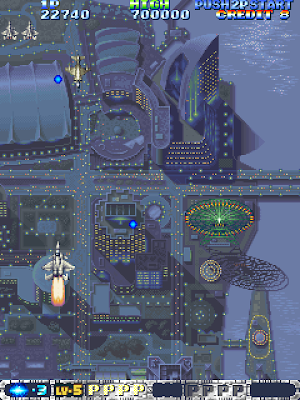 This lulled me into a false sense of security, and I began wondering if I wasn't better at this than I'd originally thought. I was soon put in my place. Air Gallet isn't a "bullet hell" type shooter, really - while the bullet patterns can get pretty hectic towards the end, there's nothing like the insane curtains of neon death that you'd associate with the bullet hell genre. Instead, Air Gallet's difficulty seems to come mostly from the high damage threshold of the enemies, combined with their accurate shooting. So, maybe this wasn't the best game to start my shooter training with after all, unless by starting with something really difficult I have ensured that everything else is going to seem like a breeze by comparison. 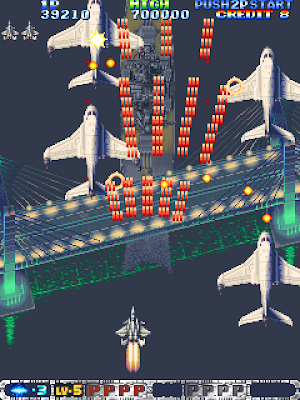 So, what else does Air Gallet have to offer? Did I mention the excellent pixel graphics? Because they really are good. I know some people would say that there isn't much deviation from the usual areas found in "real-world" shoot-em-ups - cities, airports, naval bases, that kind of thing - and they'd be right. However, I can never get enough of intricately-detailed pixel cityscapes. I don't know what it is about them, but I do know they're like digital crack to me. 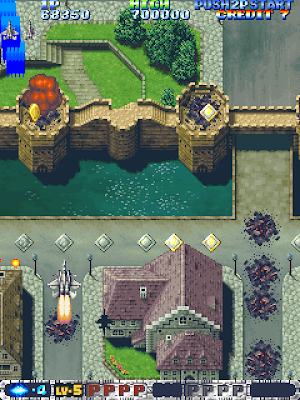 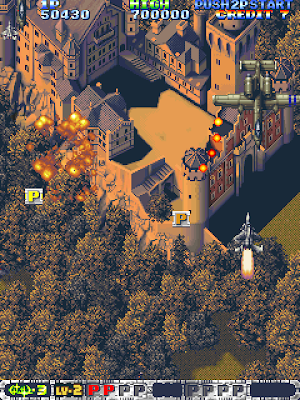 ...which happens to have a giant battle-fortress style boss hanging out in a lake behind it. 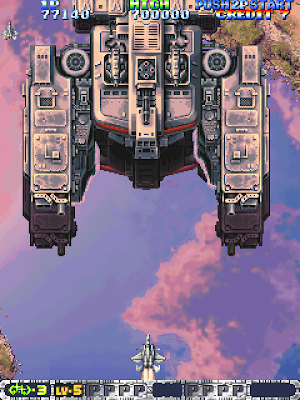 The graphics are great, but the music is pretty darn good too. Composed by Yoshitatsu Sakai, (who also worked on the bullet hell shooter Batsugun and, sadly, not much else,) the soundtrack is typically shooter-esque but with a slower, more restrained style than most. My personal favourites are the almost melancholy stage two theme:


That's really all there is to Air Gallet: solid gameplay that is very difficult without ever really feeling unfair, top-notch pixel graphics, good music and decent enemy design (by shoot-em-up veteran Junya Inoue, amongst others) with the occasional very nice touch. My personal favourite is the reappearance of the castle stage's battle-fortress boss towards the end of the game. He comes back into the fray, no doubt looking for revenge... until an aircraft carrier crashes into him and pins him to a skyscraper. 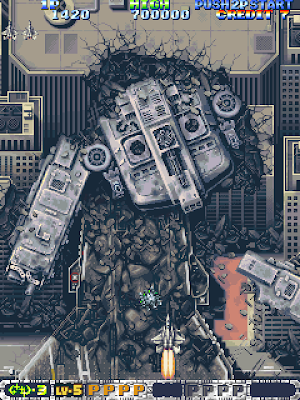 Nice. Oh, and the final boss? If you were expecting some kind of giant warship or super-bomber - a not-unreasonable expectation given the military theme of the game so far - then prepare to be confused. 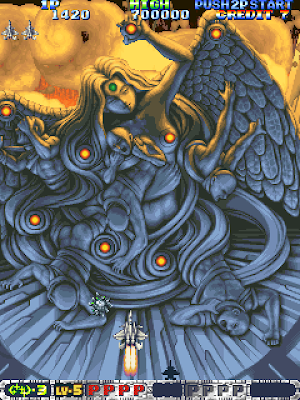 It's a huge statue of an angel smiting the hell out of a bunch of people. She's encrusted with orbs (including one acting as a glowing orange nipple), and you've got to destroy them all. It's at this point I was encountering near-constant deaths, as every barrage the statue fired seemed to be unavoidable by someone with my merely human reflexes. Once she's taken enough damage... 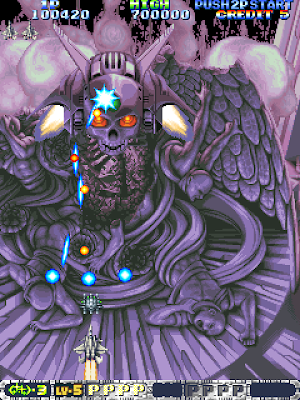 ...the real villain is revealed to be a flying robot skull. I mean if you do have the technology to make a hovering, laser-equipped battlecraft, you might as well make it look like a skull, right? Another round of dogfighting action later and the skull is destroyed. You've saved the world! 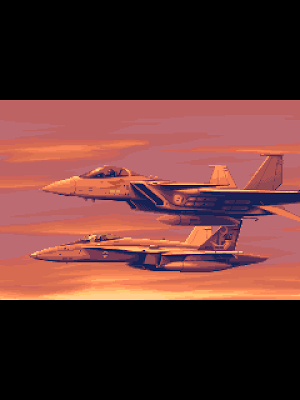 "On your mighty wings across the skyyyyy!"
World unendangered our hero heads back to base, informs everyone of his desire to have a shower (and I do so love voice samples) and no doubt scores with some beautiful young lady with a gigantic 80's hairdo. And that's it for Air Gallet! 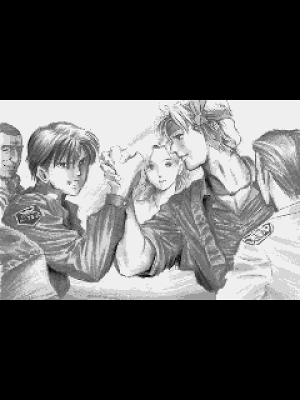 A pretty good start to the VGJUNK shoot-em-up week, I'd say. Sure, it's about as original as calling your dog Rover, but what it does it does very well. What it does is demand a constant supply of credits, but I'll forgive it for the great graphics, good gameplay and music and for giving me the chance to fight a space shuttle. It's a shame that Gazelle, a small company composed of former employees of shoot-em-up legends Toaplan, only made two games (the other being a Sailor Moon game for the arcade).
Air Gallet, then: recommended, especially if you don't mind (or actively crave) the high difficulty level, or you just want to see a giant robot impaled by an aircraft carrier.
Posted by VGJUNK