If, like me, you're in your mid-to-late twenties, here's a fact that might make you realise just how closely the grim spectre of death is hovering at your shoulder; Disney's The Little Mermaid was released in 1989. 1989! I was barely on solid foods by then. Margaret Thatcher was still the Prime Minister, for chrissakes! Anyway, now that you're all feeling the chill wind of a lonely, pointless death blowing through your bones, let's have a look at Blue Sky Innovations take on the world's most famous mermaid: it's the 1992 Genesis / Megadrive under-the-sea-em-up Disney's Ariel: The Little Mermaid. 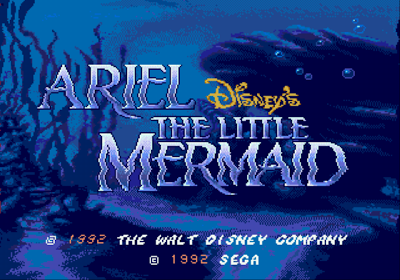 Mmm, soggy. Now, I've never actually seen The Little Mermaid, mostly due to a self-imposed (and fairly rigourous) no-Disney policy during my childhood. However, I'm fairly certain that the fishy princess (a dauphin, if you will) meets a somewhat less aquatic man-prince, they fall in love, they suffer some hardships but in the end it all works out and they get married and have a big singsong and so forth. Not for Disney the bleeding feet and unrequited love of the original fairytale - they kindly left that sort of dark take on the tales to the graphic novelists and filmmakers of today. So, sweetness and light abound, true love is fought for and eventually won and a crab sings a jaunty song. Except in this game, where it's all underwater action and nary a human to be seen, so get any notions of pixellated romance out of your head right now. 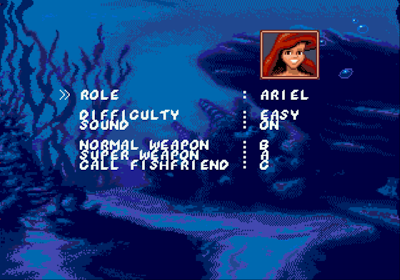 Instead, the plot is that either Ariel or King Triton have been kidnapped by the evil octopus queen Ursula and turned into some kind of green sea-maggot, along with a bunch of bland and unimportant mer-folk. You can play as Ariel or Triton (although there's not much difference between them) and venture out into the wide, deep ocean to save your subjects. I say wide and deep - there's only four stages, so I guess Triton rules a body of water equivalent to... a small lake or something? Whatever, it's hardly the raging Atlantic.
I'm going to ignore Triton and play as Ariel, because I also enjoy wearing tutus and holding tea parties for my stuffed animals. Also, it's not called Disney's Triton: The Somewhat Large Merman, is it? 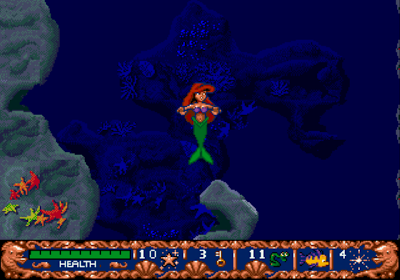 There's our heroine, no doubt longing for the day when she can live on dry land and wear clothes that aren't made from the shells of bivalve molluscs. She's got quite the quiff going on, too, but there's no time to wonder about that: there's adventure afoot! 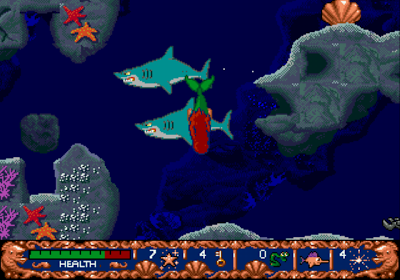 The actual gameplay is reminiscent of Ecco the Dolphin, (which TLM actually predates by a year,) in that you swim around the maze-like stages in any direction you like, avoiding enemies and rescuing mermen. That last bit might not have happened in Ecco, but it's been a long time since I played it. To help on her quest, Ariel can defeat enemies by singing at them. She's also got a limited super-shot version of her singing, which I guess just means she sings louder. You can also summon one of three "fish friends" to assist you, but aside from a couple of occasions when one of them can push blocks out of your way, they're pretty useless. Standing in your way are the traditional villains of the deep; sharks, eels, urchins and so on. The pudgy sharks are particularly irritating, and they also bear a disturbing facial resemblance to Rik Mayall: 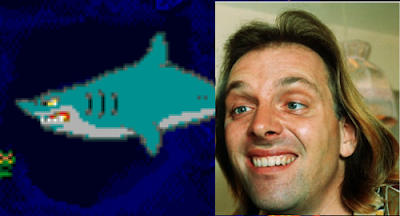 Weird. Your goal in each stage is to locate all the polyps. Once you've found one, Ariel can sing at it and return it to its original mermanny glory. 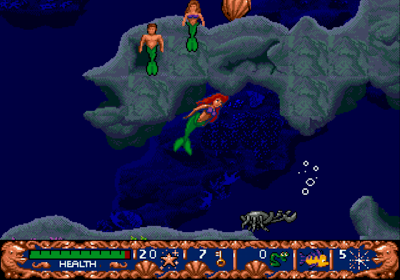 So, shout at a worm until it becomes a man. I guess Ariel's some kind of undersea Drill Sergeant. Once you've found all the polyps in a stage (not difficult, given that they're all marked on your map,) a boss appears. In the first stage, Ariel has to face... 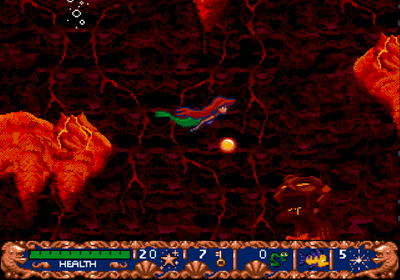 ...a leering stone face that fires egg yolks at you. To defeat it, swim in front of it and repeatedly press the fire/sing button. Music may tame the savage beast, but it also causes stone demons to explode.
And speaking of music, probably the first thing you'll notice about TLM is the atrocious music. After a passable rendition of "Under the Sea" that plays at the title screen, the music quickly takes a dive into a painful realm of grating synth noise that doesn't seem to contain even the vaguest hint of a melody. What it does contain is one particularly strident synth channel that blats out some hideous noise at irregular intervals, making it sound as though the game is trying to send you a message by Morse code. Maybe it's from Uncle Walt, reminding people to top up the liquid nitrogen in his cryo-containment unit lest he break free of his icy shackles and once again terrorise the world of Man. What I'm saying is, you'd have thought that in a videogame based on a musical, they'd have made some kind of effort to give you a listening experience that isn't likely to make you saw off your own ears. 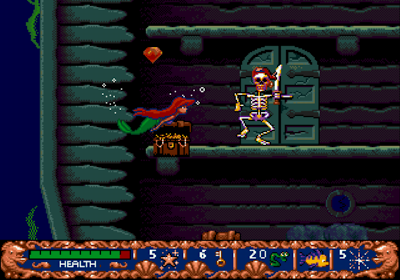 The second stage is set amongst some sunken pirate ships, inhabited by these charming skeletons. At least, they would be charming if they didn't fill up the whole passage that they occupy. Despite being a mermaid princess, Ariel has all the underwater grace of a cat in a sack, and simply getting her to go where you want can be a bit of a challenge. This is compounded by the awful collision detection that seems to follow no discernable logic: sometimes you'll get stuck on small outcroppings, sometimes you'll sail through them like they're not even there. 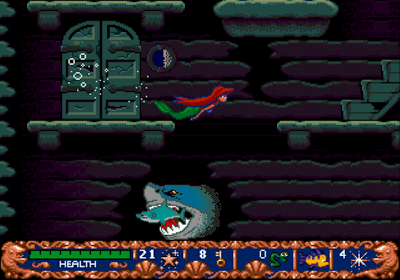 The boss? It's a giant shark that vomits smaller sharks at you. Umbrella would be proud. 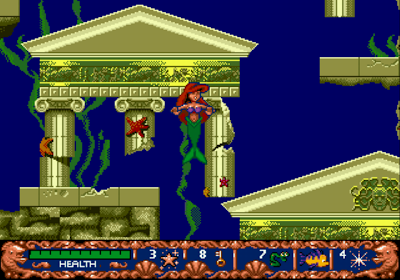 Stage three take place amongst the ruins of Atlantis, an underwater archeological goldmine that is somewhat tarnished by the fact that it's full of statues that throw discuses at you. You'd think they'd have more respect for a member of the royal family, but a lot of them don't have heads, so what the fuck do they care? They've been dealt a rough hand, they're bound to be angry. 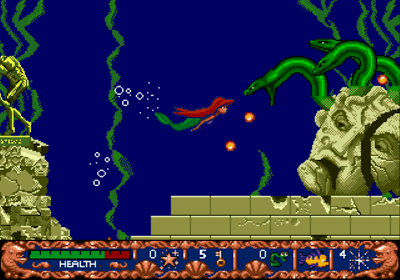 In a shocking twist, I actually think the boss of this stage is pretty cool - at least in concept, if not execution. Several sea-snakes have taken up residence in a statue's head, making it look like Medusa. Fortunately for Ariel, a mermaid's song is fatal to sea-snakes, as it seems to be to pretty much everything in the sea.
Another problem with the gameplay, which becomes particularly apparent here, is that you can't tell if your attacks are hurting the enemies. They don't flash or make a noise or anything, and when you combine that with Ariel's lack of accuracy it can be very difficult to tell if you're making an impact. It sound like a minor thing, but it's much more important than it seems: imagine playing a Mega Man game where your shots pass straight through bad guys with no discernable effect. 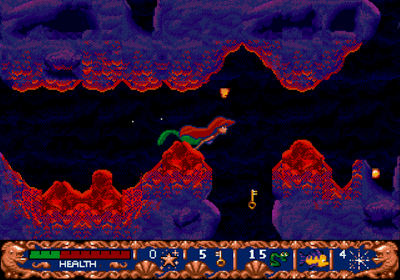 The final stage already? Geez, that was quick. Ariel finds herself in an underwater volcano of some sort - admittedly a fascinating place in the real world, but not so much fun when you're trying to navigate them with Ariel The Wonky Mermaid. While the lava blobs are a threat, the real problem is the vast number of sharks that have taken up residence here. Ariel should direct the Chinese restaurant industry over here; there's enough raw material here to make Shark's Fin Soup for everybody in, well, China.
Actually, that raises an unsettling point: what does Ariel, as a mermaid, eat? Fish? That seems in poor taste. It'd be like Prince Charles eating his butlers or something. There's not much else down there, though, and an all-kelp diet is going to get very boring very quickly. 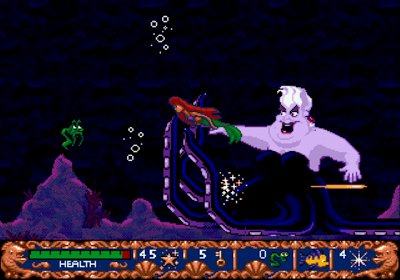 Ursula is the final boss. Yep. She just sort of sits there, when after she's gone to all this trouble you'd expect her to have a better plan than "don't move and fire the occasional magic bolt". As ever, the way to defeat her is to park your chosen mer-creature in front of her face, blast away and hope she drops first. Ursula dies, Ariel's father is returned to his original extravagantly-bearded form and all is well in the undersea kingdom, at least until BP resume their nearby drilling operations. 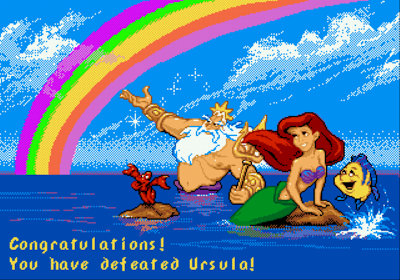 "Oh ho ho, thank you Ariel, my beloved daughter, for saving me!" said Triton. "Now I'm off to practise my droit de seigneur with the local manatees!"
That's Disney's Ariel: The Little Mermaid. It's pretty bad, as you probably already gathered. I can't really ascribe all the blame for this to the development team, though; I guess there's only so much they could have done with the license, and they had to keep it simple enough for the young 'uns (although that doesn't excuse that goddamn music). If you're a fan of The Little Mermaid, you might get some enjoyment out if it if you keep in mind that it wasn't designed for you - otherwise, if you really want some aquatic Megadrive action, then stick with Ecco the Dolphin.
Posted by VGJUNK