Another day, another game with "Kid" in the title. This one's different though, because it doesn't contain any kids and it's actually good. I know, I'm shocked too. So, I present to you Taito's 1990 arcade splash-em-up Liquid Kids! 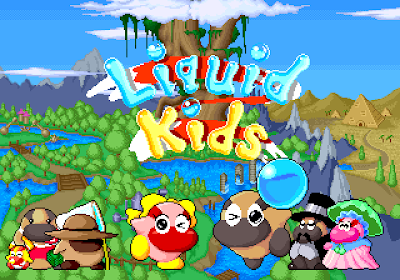 Also know as Mizubaku Daibouken (Water Bomb Adventure), Liquid Kids is a side-scrolling platformer that carries on Taito's grand tradition of videogames about throwing bubbles at things. But before we get into the gameplay mechanics, what's the story behind these mysterious bubble-related hijinks? 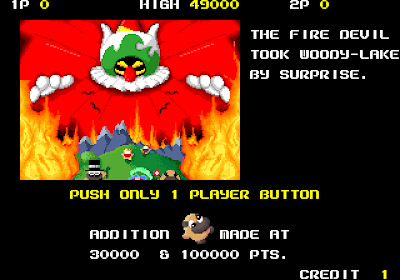 Yes, there is actually a story, related in the kind of strangely-translated English that you should be used to by now.
"Peaceful Woody-Lake. The Fire Devil took Woody-Lake by surprise. Transmitted miraculous power. The savior, "Hipopo" attack the devil."
It may sound like a series of poorly-worded wartime telegrams, but you get the general idea. You control the savior Hipopo, who is a heroic... well, what do you think he is? 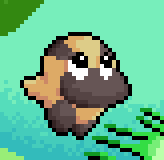 Given that he's called Hipopo, it's not much of a surprise to learn he's supposed to be a hippopotamus. He sure doesn't look like a hippo, though; until my feeble mind made the connection between "Hipopo" and "hippo" I though he was supposed to be platypus. I'll admit to being a little disappointed that he isn't a platypus, but I'll let it slide because as videogame heroes go, hippos are hardly common. 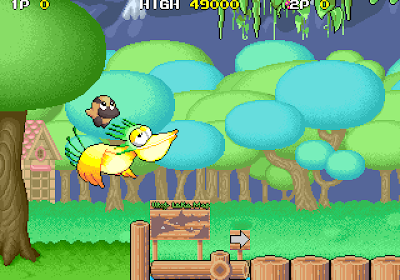 So, what was the "miraculous power" that was transmitted to Hipopo? Well, our brave young platypus hippo now has the power to create bubbles of water and throw them at his enemies. You know, like in Bubble Bobble - but also filled with the raging power of Poseidon himself. 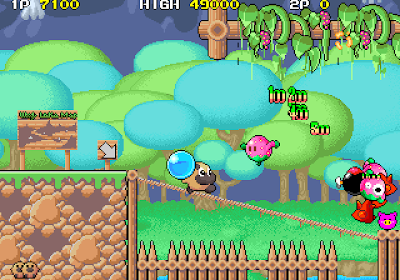 Given that the villains are the Fire Devil and his minions, Hipopo has to be feeling pretty pleased with his new power. It'd be a different story if Woody-Lake had been attacked by the Rubber Devil and his legion of raincoat-wearing troops. 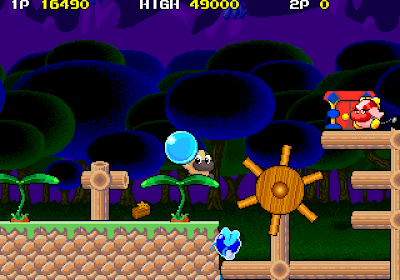 The controls are simple and intuitive, with the stick moving Hipopo around and one button making him jump. The other button controls your bubbles; tapping it throws a bubble ahead of you, and you can also charge up your bubble by holding down the button.
Your waterbombs are primarily an offensive weapon; hitting one of the adorable enemies with a balloon will soak them through, and once they're soaked you can walk into them to kick 'em and kill 'em. If your bubble bursts, it also sends a wave of water along the floor, which is useful for taking out enemies as well as some other, less murderous tasks.
So far, so much like Bubble Bobble, but the main difference is that rather than killing all the enemies in a stage to advance, you have to make your way to the exit door. It’s a simple premise with several elements that push it into “damned fine game” territory. 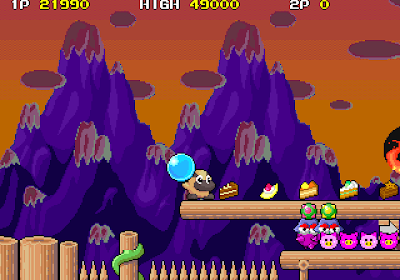 The graphics in Liquid Kids are a big plus. Excellent for their time, they’re big, colourful, cartoony and most of all adorable. As much as I like gore-spattered horror titles like Resident Evil and Silent Hill, I must admit I’m not immune to the technicolour charms of a really cutesy game. Everything looks like a cartoon, with characterful animations and especially adorable enemies that have an almost Kirby vibe to them, possibly with a bit of Moominosity thrown in.
Along with the graphics, the presentation is further enhanced with an excellent soundtrack by Kazuko Umino, who also worked on Pu-Li-Ru-La and was part of Taito’s in-house band Zuntata. Here’s “Ride the Pelican! Everyone Friends!”, the first stage theme.

It’s very nice, and catchier than ebola. Even better than that is “Waltze of Water and Bubble”, the stage two music.

Personally, I think this is downright haunting (but then, I am a sucker for this kind of thing). 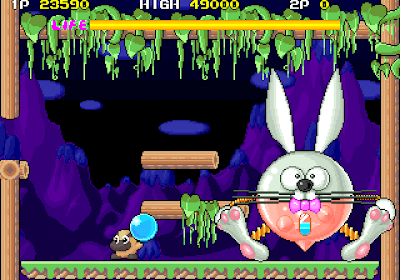 Away you go, guiding Hipopo past the various monsters, environmental traps and giant bosses like the mechanical, fire-spitting rabbit pictured above. Another thing LK has going for it is some wonderfully daft boss design, with my personal favourite being this guy: 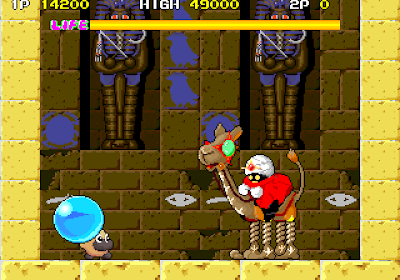 A dark wizard who jumps around on a spring-loaded camel. Maybe he should team up with the pogoing elephant from Kamen Rider SMR.
Another thing LK does well, and it’s something I really appreciate, is its very well-balanced difficulty curve. Starting off in the not-particularly challenging Woody-Lake, the difficulty gradually increases as Hipopo makes his way through a water kingdom… 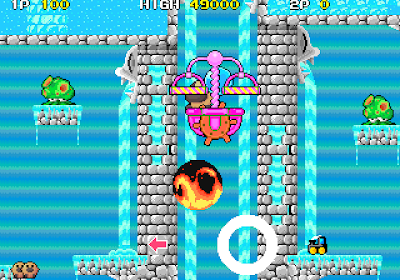 …an almost Castlevania-clocktower-esque factory stage, featuring tiny metal knights that try to lance you to death, 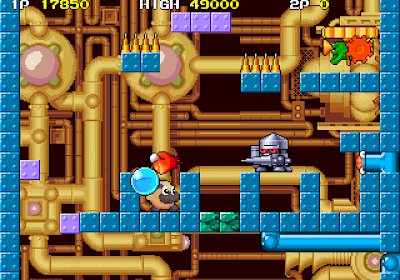 ...and a pyramid filled with mummies and ghosts which is also home to the mechanical camel. 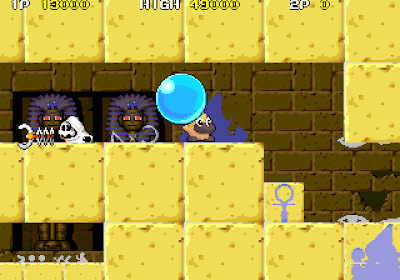 It’s about now that LK starts offering some real challenge, but thanks to the smoothness of the difficulty curve beforehand you don’t really notice. Thanks to the very generous continue system that starts you almost exactly where you died, LK feels like a challenge but never cheap.
Once you’re out of the pyramid, Hipopo makes his way up a giant tree… 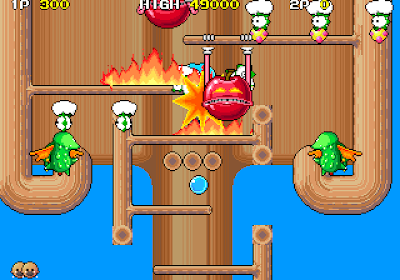 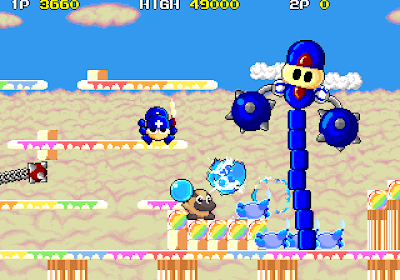 …and finally, he arrives in the Fire Devil’s labyrinth. 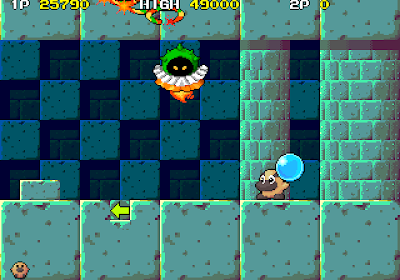 By the time you get here the sedate pace of the first few stages is all but forgotten, with spikes everywhere and delicate jumping skills required. The Fire Devil himself is an interesting-looking chap who possibly should have some words with his personal stylist. 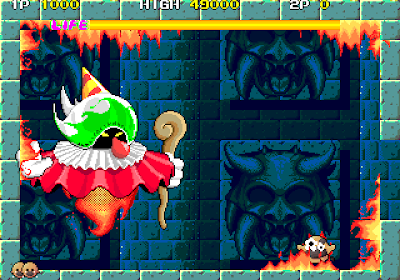 I know I think of party hats when I hear the words “Fire Devil”. After a while, he ditches his clown outfit and becomes, in the game’s only cheap moment, a ball of fire surrounded by spinning arms. 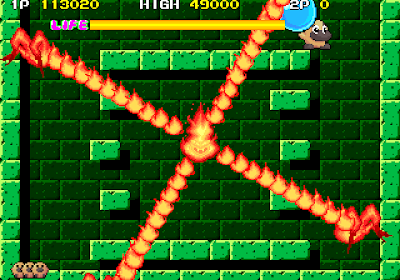 The trick here is to know that you can hurt him while he’s transforming, so make sure you do as much damage as possible during that period; otherwise, his arms will eventually rotate so fast you won’t be able to get away from them.
Fire Devil suitably doused, Hipopo has rescued all his adorable hippo friends and saved the day with his Super-Soaker style magical powers. Hooray! 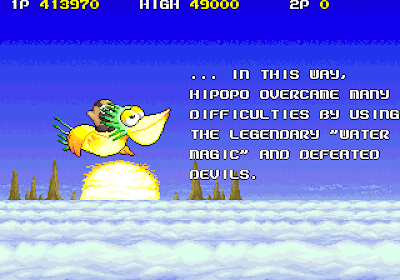 This has all just been a long-winded way of trying to tell you that I really like Liquid Kids. To use an overworked phrase, it’s a forgotten gem, forever destined to languish in the shadows of Bubble Bobble. It deserves much more than that, for many reasons: the spot-on gameplay, the graphics and music, the sheer sense of cheerfulness that runs through the whole experience. It’s not perfect, of course; I would have liked there to have been more of the sections that saw you using your water for things other than killing, like growing plants to use as platforms or turning waterwheels, and the final boss is something of a letdown after all the previous weirdness, but overall I can’t recommend Liquid Kids enough for lovers of retro action.
Aside from the arcade release, it was ported to a few consoles like the PC Engine and the Saturn, (and apparently it’s one of the most sought-after Saturn games around,) but if you want to play it now your best bet is to pick up Taito Legends 2 for the PS2/Xbox, which also comes with Growl. 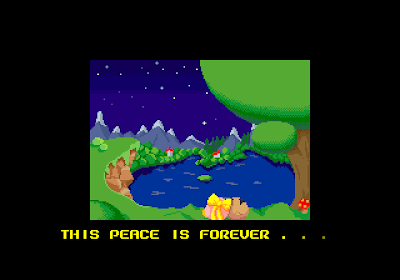 BONUS: Just a couple of days ago, a very nice piano version of the Stage 3 music appeared on YouTube, courtesy of user "yukimatsuri". And here it is!