I'm drinking deep from the well of obscurity with this one, folks: Konami's 1987 arcade title Fast Lane. Have you ever heard of it? No, and until last week I hadn't either, which is odd because I am feted across the globe for my encyclopaedic knowledge of crappy arcade games. Okay, so that's a complete lie, but today's game really is pretty damn obscure. 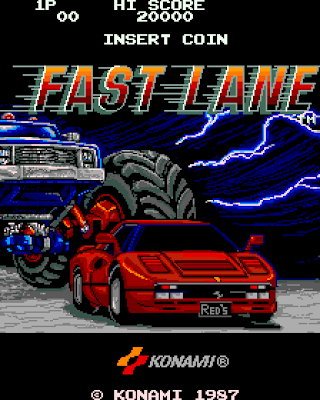 By 1987 standards, that's a cool-looking title screen. My youthful interest (very youthful, as I would have been three or four years old when this came out) would have been piqued instantly by the sight of an unsuspecting sports car being stalked by a no-doubt murderous monster truck in the midst of an electrical storm. It's like the cover of an 80s slasher movie from a parallel world where cars evolved from men.
So, what are you expecting after seeing that title screen? An OutRun style beat-the-timer racing title? Something along the lines of Spy Hunter, maybe? Oh boy, are you ever going to be disappointed. 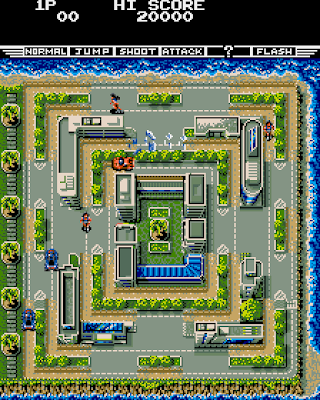 It's Pac-Man! Pac-Man with cars, sure, but it's just yet another eat-em-up maze game. You play as a red sports car instead of some ravenous yellow mouth-demon and you eat grass instead of dots, but the basic premise is the same. Pac-Man was only seven years of when Fast Lane was released and the maze-em-up design route was already more heavily travelled than the M1, but I guess Konami thought that all the genre really needed was a lick of paint and a throbbing V8 engine. 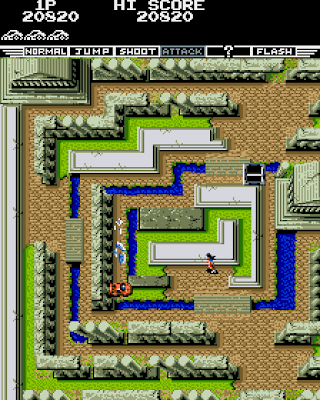 As I'm sure you've already figured out, the goal of Fast Lane is to clear each stage of whatever undesirable road surface is present by driving over it, be it grass, bricks or what looks like an electron microscope image of blue velcro. Rather than ghosts, your car must avoid touching the blue monster trucks that patrol each stage. Monster trucks, as I'm sure you're all aware, are the natural enemies of the sports car. On the plains of southern America, you'll often see gangs of monster trucks hiding in the long grass outside petrol stations, just waiting for a tender young Corvette to pull up. In a flash and with a mighty roar, they quickly tear their prey apart with their comically oversized wheels and eat their fill, leaving the carcass to be picked at by the circling motorcycles. 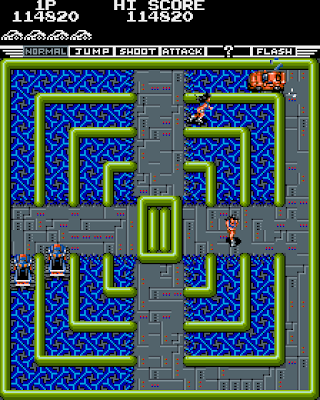 Of course, I wouldn't be writing about Fast Lane if there weren't at least a few interesting things about it (other than it being almost completely forgotten). First off, it takes the standard maze-game control mechanics in some rather odd directions. Most baffling of all is that as you're playing as a car that's hemmed in on both sides by walls or buildings, you can't turn around. Once you're heading down a particular path, you can't reverse or turn around which quickly becomes frustrating once there's more than one monster truck after you. 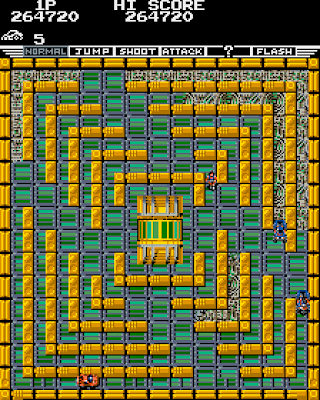 The only way to get into a different "channel" is to wait for a gap in the wall and sort of drift over there sideways. Your car can clearly turn normally, as it does so automatically whenever you reach a corner, but for some reason you're limited to changing paths in the Fast and the Furious: Konami Drift fashion. Oh, and speaking of fast, one of the buttons makes your car move faster as long as it's held down. The other button? That lets you attack. Attack? 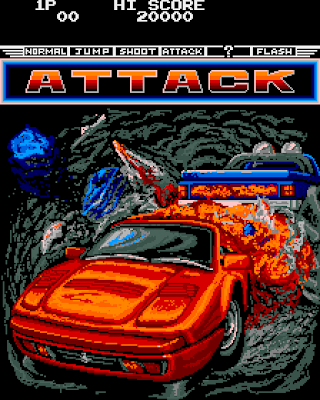 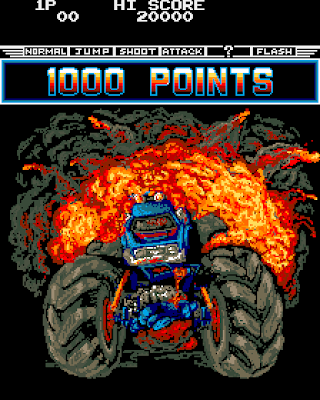 Who's the Monster now, huh? It is me, I am the monster, although my wheels have remained at their standard size. Fast Lane lets you fight back against your big truckin' oppressors by collecting power-ups scattered around the levels. There's a jump, a forward-firing shot, the astonishingly aptly-named "attack" which makes you zoom around being invincible for a bit, an option that travels ahead of you and a screen-clearing flash attack. Like Pac-Man's ghosts the trucks are only destroyed for a short time, although disappointingly they don't float back into the center as a pair of disembodied wheels or anything. 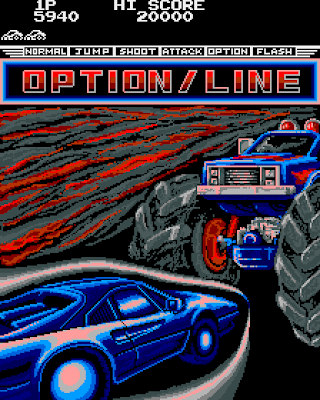 Each time you destroy a truck with your attack, you get a brief cutscene showing your foes exploding in a giant, searing fireball of temporary incapacitation. This is all well and good at first, but no matter how cool they look, after a while it starts becoming a little grating to see the same explosion over and over, especially when it suddenly cuts back to the game and you've forgotten the positions of yours and the enemy’s vehicles.
Another thing to note about the power-ups: yep, there's on called Option and yes, it appears to be based on the Option from Gradius. In fact, the power-up system is almost identical to the one found in Gradius. You can see the familiar power-up bar at the top of the screen: each time you collect a power-up, it moves along just like in Gradius, except not interesting or fun. Does this mean that some of the same development team that created Fast Lane also worked on Konami's seminal space shooter? Possibly, but it's difficult to know for sure for reasons that I'll discuss in a while. It seems likely, though. 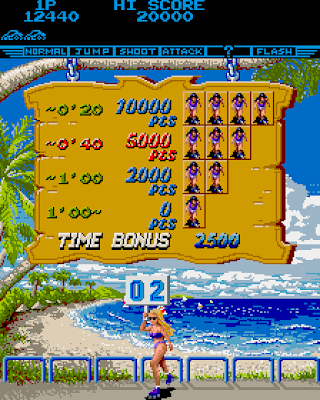 More bizarre than the Gradius-inspired weapons system in the manner in which you actually collect the power-ups in the first place. Nothing as simple as "POW" icons for Konami - no, they want you to perform vehicular murder for your rewards. 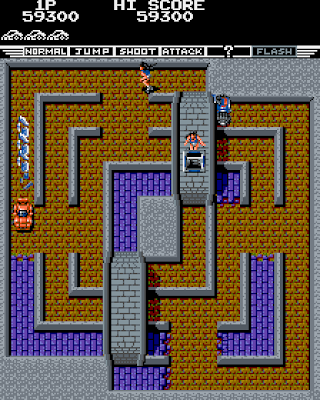 For some unfathomable reason, girls in leotards occasionally appear on the screen and start running around the stage. These nubile, scantily-clad young ladies frolic about, enticing you to ram your powerful red vehicle right into them. Upon doing so, they giggle, grant you a power-up and then disappear back to whatever whimsical fairy-world they came from. There are deep, deep layers of Freudian weirdness here that I'm not qualified to go into, but I'd just like to reiterate the point that this game rewards you for mowing down defenceless women. 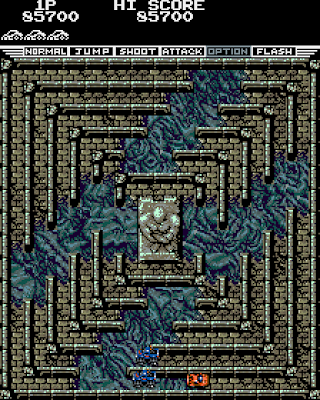 And now for a shocking confession: I didn't actually complete Fast Lane. While it starts of easy enough despite the fact that the monster trucks are just as fast as your sports car, the game quickly becomes too difficult to persevere with. It starts with the addition of a second monster truck, a sentence I never thought I'd utter in a negative way. That's not too bad, but after a while the trucks gain the ability to re-lay the grass/bricks/shattered pieces of your dignity that you had already picked up. Combine this with some treacherous stage layouts and your car's inability to turn around, and you're in for a frustrating time. I personally gave up at stage 17: 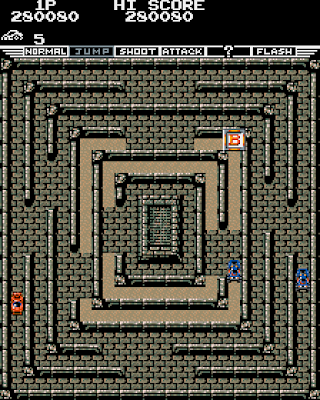 You will notice that there's only one way in or out of the middle area, and those two trucks mean new track gets laid more often than the average porn star. So, I gave up. Not because it was ridiculously difficult but because it was boring, or at least nowhere near interesting enough for me to repeatedly suffer through the same level over and over in the vain hope I'd manage to do it before my bones crumbled to dust through the sheer tedium of it. I couldn't quite make it to the ending (presuming there is one) for you all, and for that I can only apologise. In my defence, a quick bout of internet searching reveals that no-one else has either, making this article the definitive English-language summary of Fast Lane. My parent have already contacted me to let me know who proud they are. 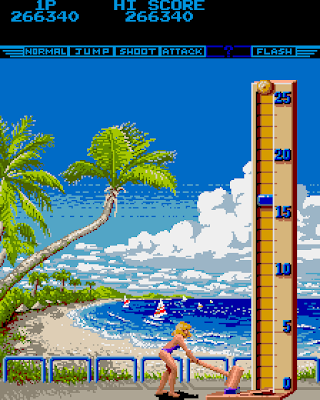 When you do finally give up and get a game over, another girl in a leotard appears and rings a test-your-strength bell that marks how far you got. I can't help but feel I'm being mocked, possibly for not running over enough women. I don't know what you want from me, Fast Lane. Why was my car even concerned with changing these road surfaces? I clearly demonstrated that it could drive equally well on grass or tarmac, so why? Was it just to spoil the off-road fun of the monster trucks? Between that and all the hit-and-runs, was I... was I the villain in this game? 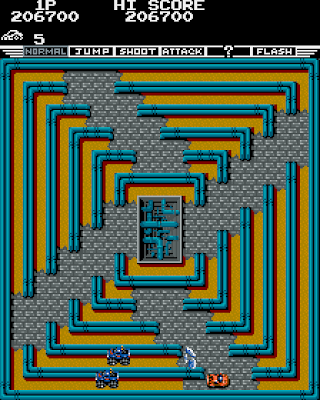 I've run out of things to say about Fast Lane already. Wait, I thought of one more - the music's pretty good. Okay, now I'm done. To recap, it's a sub-par Pac-Man clone hampered by the inability to turn around and the enemies that can replace the track. Graphically it's decent enough for the time, although it does occasionally throw levels at you which are decked out in some nauseating colour schemes. The mechanic of running down girls is an odd one - I assume they're supposed to be race queens, albeit ones that have finally snapped after a combination of breathing exhaust fumes and being leered at for years. In all, I think the most interesting thing about Fast Lane are the Gradius-inspired elements. There's a lesson we can all take away from this: Gradius makes everything better.