People eat goose at Christmas, right? Ebenezer Scrooge did, I know that much. Therefore the goose is a symbol of Christmas and by extension today’s game is appropriate for the festive season, he shouted over the sound of his overstretched logic snapping. It’s Anton Hinxman and Reelax Games’ 1985 honk-em-up The Lost Eggs of Gertie Goose! 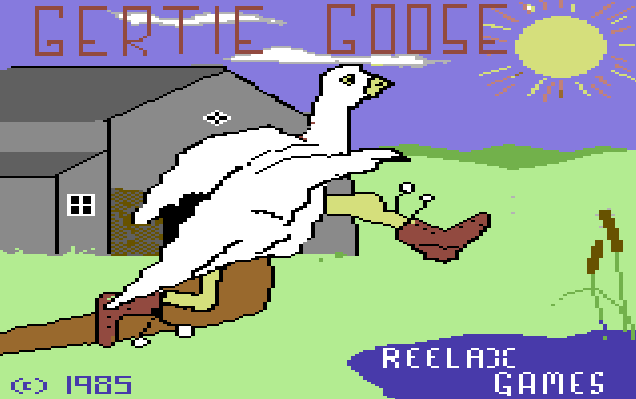 Or maybe the game’s just called Gertie Goose, because that’s what the loading screen seems to suggest. And there goes Gertie now, marching forth in her boots with one wing raised as if in a salute, her goose-like steps carrying her across the countryside. Hmm. For some reason I don’t trust Gertie. Let’s just hope that’s not the Polish countryside, or things might be about to get very unpleasant. 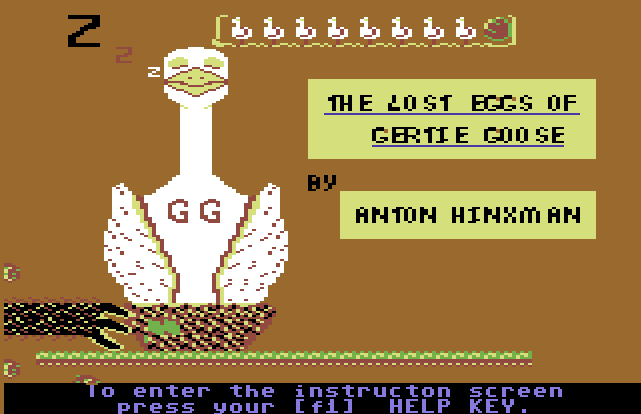 The title screen is less concerning, and it sets up the conflict of the game by showing a shadowy claw reaching in to steal the eggs from Gertie’s nest as she dozes atop her clutch. Gertie’s egotism is so extreme that she’s monogrammed her own chest, and her initials being “GG” implies that Goose is actually her surname and not a simply description of her species. So, you’ll be playing as a goose whose eggs have been nicked. But who would be so evil as to steal a goose’s unhatched babies? 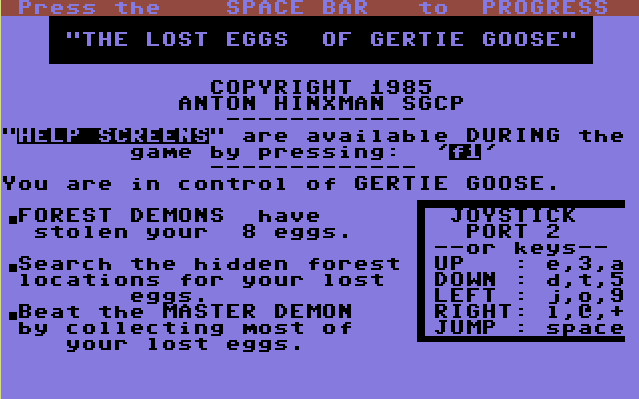 Why, the forest demons, of course – demons being renowned for their love of omelettes, I guess. They work under the orders of the Master Demon, a rather grandiose title for an evil entity that spends its time harassing geese rather than eating babies or trying to corrupt the eternal souls of mankind like a proper Master Demon. Even if we assume that the Master Demon is having a bad run of luck and is looking for an easy win to boost his numbers, going after an opponent as notoriously vicious as a goose seems like a mistake. 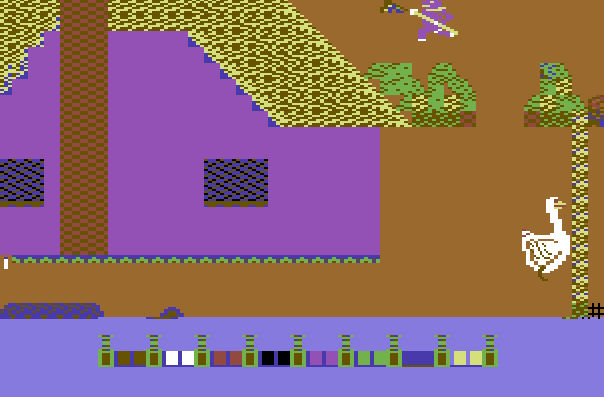 The game gets underway, and it is revealed that Gertie Goose is a wandering-around-em-up. The eggs are out there somewhere, and you’ve got to get them before the forest demons take them away for good. There’s Gertie at the right of the screen, staring intently at a hedge. You move Gertie around with the joystick, and, erm, that’s about it. There is a jump button, but as far as I can tell there’s never any need to jump over anything. There aren’t any holes or carefully-laid goose traps or anything like that. Just forest demons, one of which you can see at the top of the screenshot above. I don’t know why they’re carrying croupier sticks. Maybe they’ve got part-time casino jobs to get to, which might explain why they seem distracted. They certainly don’t make a beeline for Gertie, they just bumble around the screen and if they collide with Gertie a buzzing sound plays and… nothing else happens. I thought you’d lose a life or get set back to the start or something, but no. You just get a sound effect like a robot blowing its nose. Maybe that’s just down to the version of the game I’m playing, and there’s very little information about Gertie Goose out there. I suspect it’s just that the game was designed for young children, though. 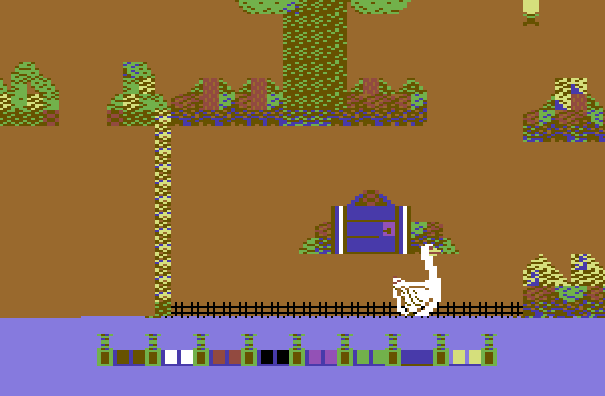 The demons might not be a threat, but that doesn’t mean Gertie Goose is free from tricks and traps. For example, here I managed to get Gertie stuck inside this fence and had to reset the game. Hey, I didn’t say they were intentional tricks and traps. 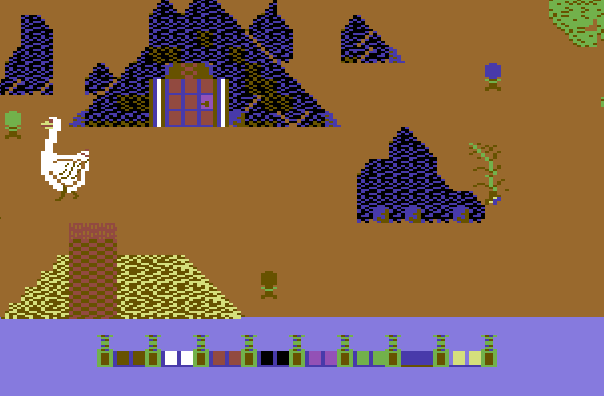 Back to the actual egg-collecting, and you might look at the screenshot above and think “hey, there are three eggs right here – a green one, a brown one and a blue one.” They are eggs, but they’re not Gertie’s eggs. They’re smaller, decorative eggs that contain keys, keys used to unlock the door of the corresponding colour. Quite why the keys are visually rendered as eggs and not keys is beyond me. The programmer’s unshakeable conviction that the game’s goose-and-eggs theme is its strongest suit and should be preserved at all costs? A rebellion against the countless other games that came before where keys were represented by something as tediously prosaic as pictures of keys? Stealth advertising by the British Egg Marketing Board? I’m sorry, but I cannot answer that question. 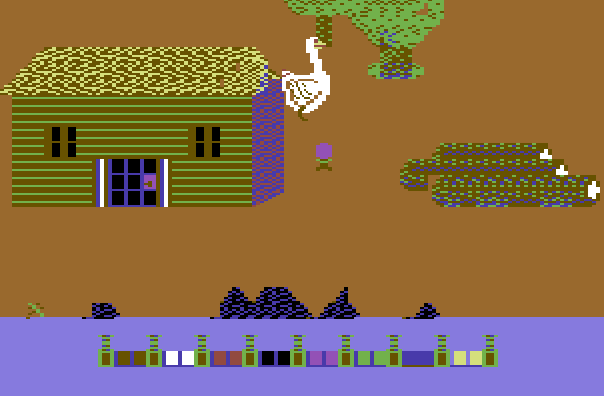 Phase one of the game is to walk around the forest grabbing all the egg-key you can find. The instructions claim you must “pick up the eggs with the use of Gertie’s feet,” by which they mean you have to walk over them. It’s not complicated, and the “overworld” is small enough that finding all the eggs will only take a minute or two. Unsurprisingly, it’s also not much fun. Gertie walks around, the enemies don’t slow you down at all, and you can jump but there’s absolutely no reason to. Looking back on it now, only two things distracted me from just how boring this game is. One is that you have to be right at the very edge of the screen to get it to scroll and I was worried about getting stuck on another fence. That was definitely more frustrating than boring. The other thing was the sound of Gertie’s footsteps, because in a game where the gameplay is almost non-existent and the graphics are simple to the point of abstraction you get the surprisingly accurate sound of a goose’s webbed feet slapping on the ground as you waddle across the screen. That sound effect is definitely the best thing about this game. 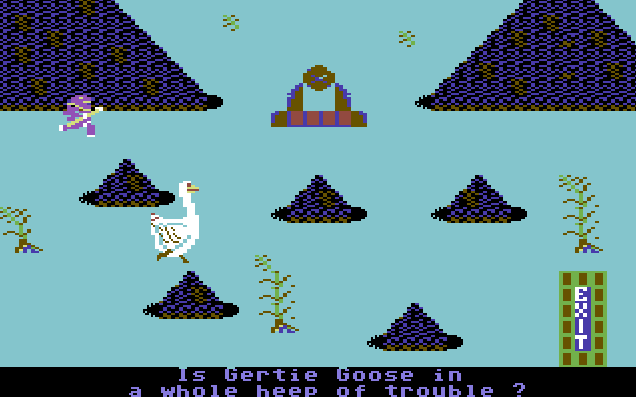 Once you’ve collected the keys, you can begin entering the colour-coded doors dotted around the map. Each door leads to a single-screen room containing some very ugly graphics, an ineffectual forest demon or two and an actual egg. That’s the egg on the plinth at the top of the screen. Yes, I know it looks more like a medicine ball or a half-sucked Malteser that’s rolled under a sofa, but it’s one of Gertie’s precious eggs. Walk into the egg to collect it, and then walk back out of the room. If you manage to avoid being distracted by the misspelling of “heaps” and the fact that you seem to be in a room filled with oversized witch hats, you can clear the room in, oh, fifteen seconds or so. 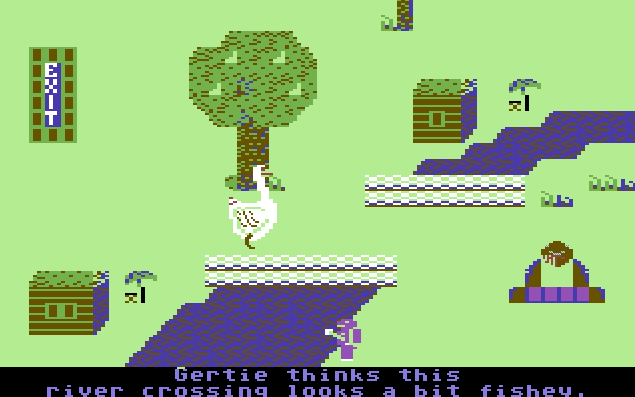 The rest of the game is just grabbing the eggs from the rooms. Here, all sense of scale goes out of the window as Gertie is depicted towering over the houses and being half the height of a mature apple tree. This makes me wish the entire game was about a colossal twenty-foot goose, stomping through the forest and making slappy feet sounds. 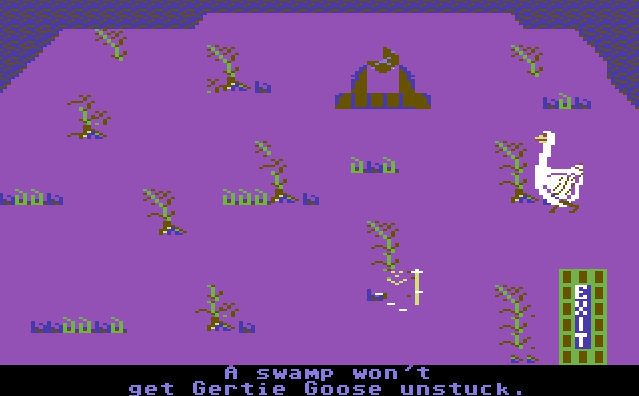 Each of the rooms has their own little text description at the bottom, a computer game trend that (I assume) began with Manic Miner and which I rather enjoy seeing whenever I’m playing games of this vintage. The “Decathlon Graveyard” joke from Toilet Truble still gets a chuckle from me, for example. For a moment I was about to say I’d like to see these short area names make a return in modern gaming, but then I thought about it for longer than two seconds and I realised that if they did come back, these days they’d just be long out-of-date memes or advertisements for premium in-game currencies and nobody wants to see that. 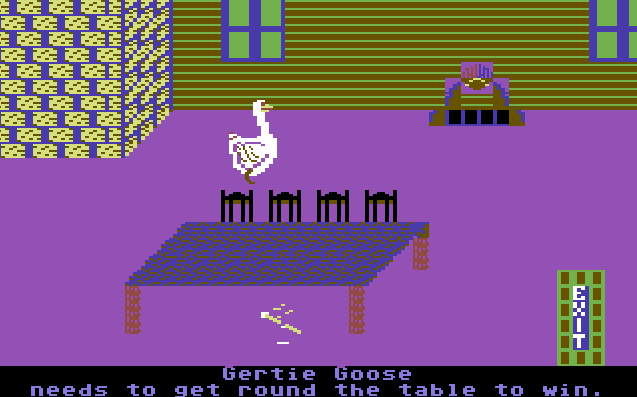 Just to be clear, no aspect of Gertie Goose’s gameplay is fun or interesting. Like, the challenge here is specifically to walk around a table. Super Mario Bros. it ain’t. It’s not even some third-rate action game like the similarly poultry-themed Alfred Chicken, and I’ve lost patience with the “oh, it’s made for very young kids” excuse. A much better excuse is that the whole game was made by one person in 1985, but that doesn’t prevent Gertie Goose being anything other than a chore to play. An ugly chore at that, with flickering scenery, colour bleeding and perspective issues that’d make MC Escher mutter “what the hell” under his breath. For example, can you see the clump of yellow pixels underneath the table? That’s actually a forest demon, it’s just that the demon’s body is the same colour as the background and so it’s almost invisible. 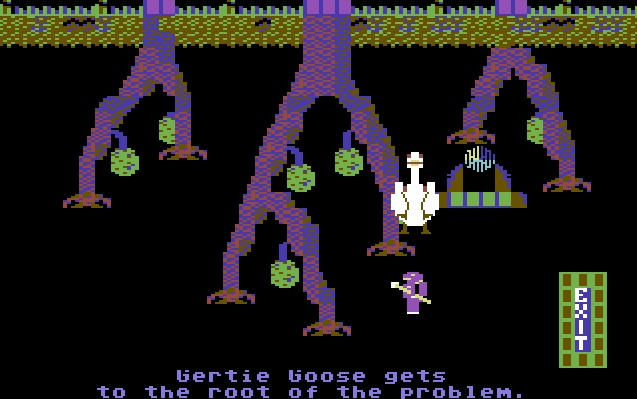 That joke was much better when Chris said it in the original Resident Evil after destroying a huge plant monster. I concede that my use of the word “better” in this situation might be contentious. 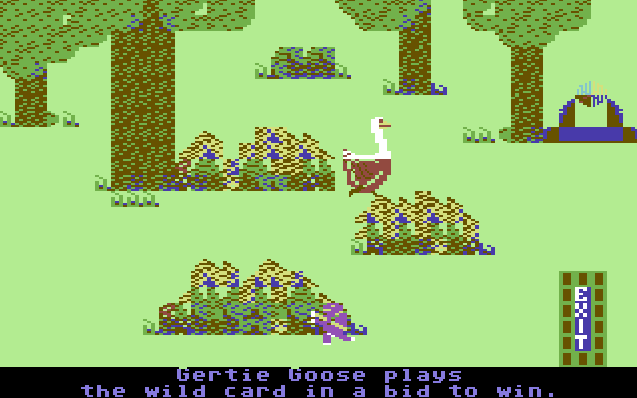 Because I hadn’t changed the difficulty level and the default is “Easy,” it took me a while to realise the real point of conflict in Gertie Goose. It’s not that the forest demons are out to stop you – it’s that they’re trying to steal the eggs before you can get to them. The higher difficulty levels make this clear as the number of demons is greatly increased and you’ll frequently enter a room to find the egg already pilfered, which does make things a tiny bit more interesting. Working against a time limit gives you some kind of challenge, at least. 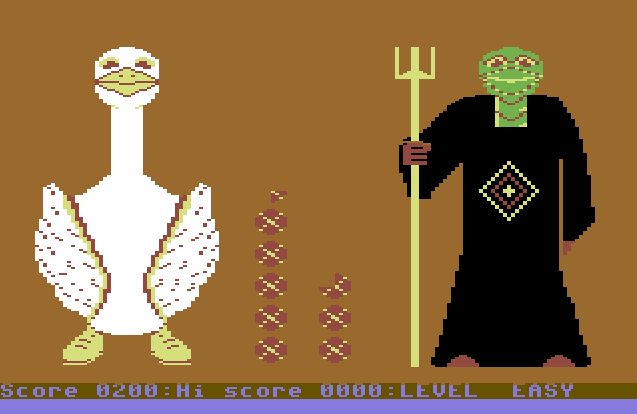 Once all the eggs are gathered, Gertie and the Master Demon tally up their eggs and whoever has the most, erm, wins? Either way it seems like Gertie is the loser, because she’s lost some of her precious eggs. More accurately, the Master Demon is the loser, because, well, look at him. That’s not a visage to strike fear into the hearts of geese everywhere, is it? He looks like a toddler tried to carve a snake out of a brussels sprout. I’m getting a real Manos: The Hands of Fate vibe from that smock, and what’s with that trident? Making your pitchfork out of spaghetti does not make for an effective poking implement. In short, the Master Demon clearly gets bullied by the other demons whenever he goes to Demon Camp, and the other demons are right to bully him if he can’t outwit a goose. 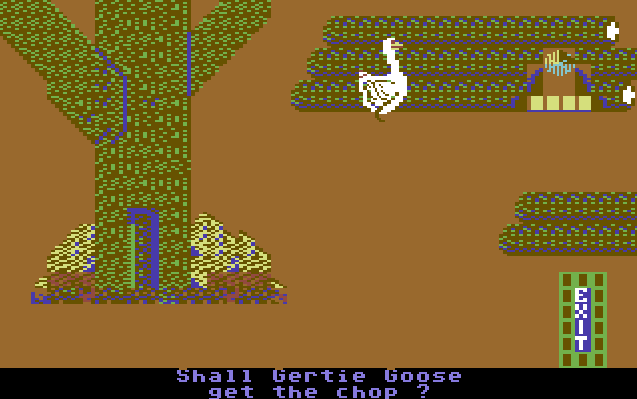 As someone who’s played a lot of weird game and a lot of boring games, I hope you’ll accept my considered opinion that The Lost Eggs of Gertie Goose is a weird, boring game. It all feels so very pointless, is the thing. And how are Gertie’s footsteps making that slapping sound when she’s clearly draw as wearing boots? I’ve had enough of this game, I need a lie down in dark, goose-free room.