Because VGJunk is a bastion of refinement and good taste, here’s a ZX Spectrum game called Toilet Truble. 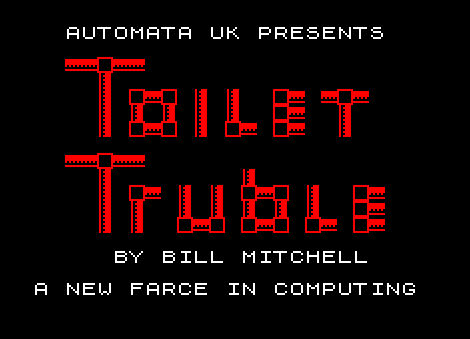 Published in 1985 by Automata UK, Toilet Truble is not the story of the morning after you eat a dubious burger purchased from a van parked outside a nightclub or George Michael’s run-ins with the law. Instead, it’s the story of one hapless snail called Zak. 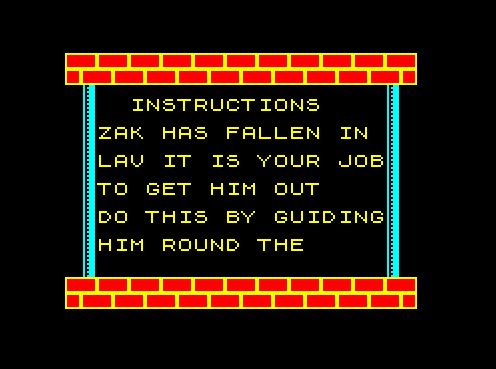 Poor old Zak the snail has fallen into the lav. You know, the bog, the loo, the khazi. To rescue the unfortunate mollusc, you must guide him through twenty screens of heart-racing, pulse-pounding action, collecting five toilet rolls on each stage before you can move on to the next. Apparently, if you spend too long on any one screen Zak will become “delerious” (sic), presumably overwhelmed by the noxious vapours that have built up in the U-bend. I never saw this happen, because Toilet Truble doesn’t let the player hang around, as we shall see. 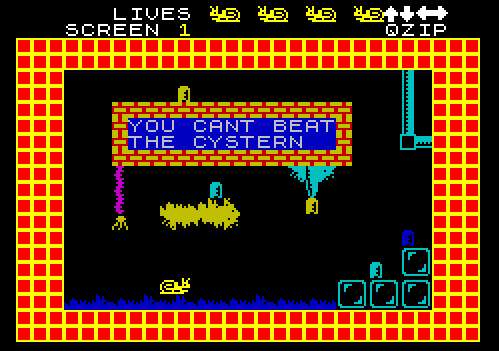 Here’s screen number one, and it opens with a pun, joy of joys. Zak’s the yellow snail at the bottom of the screen, the toilet rolls you need to collect are the cylindrical objects dotted around the screen and everything else is a lethal death-trap that is fatal should you so much as brush up against it. The pipe in the top right? Instant death. The fuzzy blue stuff at the bottom, which I assume is some kind of mould? Causes agonising death at a touch. Even the text box proves to be deadly on contact, which seems a little harsh. I didn’t think it was that bad of a pun.
So, the point is that you shouldn’t touch anything that isn’t a toilet roll. That would be fairly easy to do if it wasn’t for one thing: Zak is always moving, and for a snail he moves at a speed I’d consider “ironically fast.” You can change his course so he moves up, down, left or right, but he can never stop. This means that Toilet Truble’s gameplay is very similar to the venerable mobile phone timewaster Snake, the main difference being that Zak doesn’t get longer each time he collects a toilet roll. 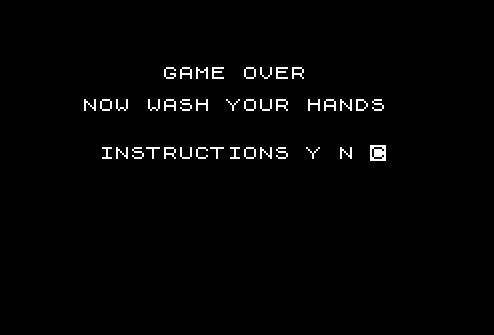 I had a lot of trouble getting past the first screen, which I suppose is where the game gets its spellcheck-confusing title from. Part of the problem was that I was struggling to figure out the controls. 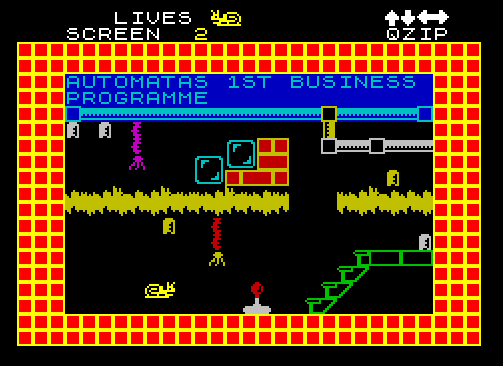 That was before I realised that a) the controls are listed right there at the top-right of the screen and b) I’m an absolute moron. That said, even when I did know the controls I still wasn’t doing very well, because Toilet Truble is a difficult game. As mentioned, Zak zips around like he’s got a jet engine under his shell and every non-toilet-roll pixel of scenery is instantly fatal, but on top of that some of the gaps you need to negotiate are extremely tight and, worst of all, the controls aren’t quite responsive enough for your needs. There’s often a delay between pressing a key and Zak changing course, and sadly it’s not even a consistent delay so you can’t really learn to accommodate it. There’s always the possibility that I’m bad at computer games, but I played a lot of Snake in my distant youth – I had a Nokia phone and some extremely dull A-Level classes during my high school days – and I was always better at that than I am at Toilet Truble. It doesn’t help that when you do touch something and lose a life, you lose any toilet rolls you’ve collected and have to do the whole screen again. 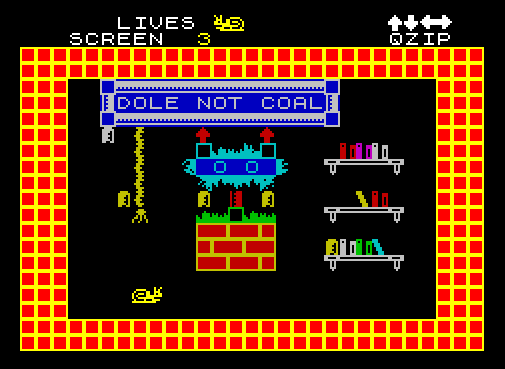 Aside from the gameplay, which is shallow and not particularly well implemented, what does Toilet Truble have going for it? Well, it’s kinda weird. Weird in a specifically British way, I suppose, with lots of references to mid-eighties British culture. Toilet Truble is something of an appropriate companion to Telly Wise in that regard. For example, the game’s third screen is emblazoned with the slogan “Dole Not Coal.” I’m sure we can blame the phenomenally successful Manic Miner and Jet Set Willy games for every screen of Toilet Truble being given a “name,” just as they were in Matthew Smith’s classic and occasionally broken Spectrum platformers. As for the phrase “Dole Not Coal,” it’s an inversion of “Coal Not Dole,” a slogan used by protesting coal workers during the UK coal miners’ strike of the mid-eighties, one of the most important events in post-war British politics and something that’s still in the news to this day. I’m not sure what Bill Mitchell (Toilet Truble’s author) was implying with the phrase “Dole Not Coal,” mind you. That living on benefits is better than working dahn t’pit? My grandfather was a coal miner and if half the stories he told us about it are true then yeah, that seems a reasonable assessment. 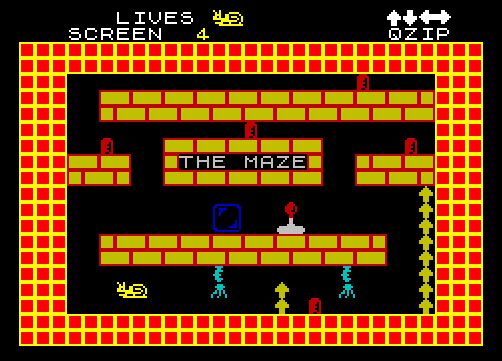 Not all of Toilet Truble’s screens are so interesting. This one’s called “The Maze,” but it’s not a maze at all. By rights it should be called “Sliding Zak into gaps so tight they require pixel-perfect manoeuvring is a right pain in the arse,” but I suppose that wouldn’t have fit on the screen. 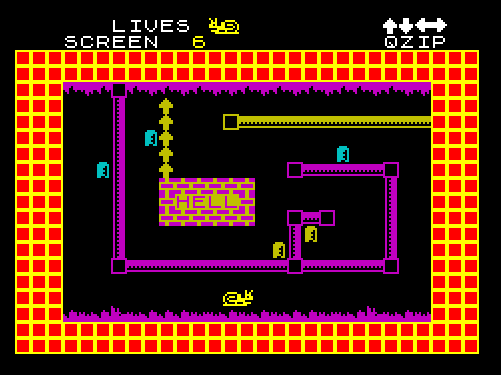 Then there’s “Hell,” which doesn’t seem all that infernal aside from the difficulty of getting the toilet roll that’s trapped in that spiral of pipes. Maybe it’s a very specific section of Hell designed to punish people with a morbid fear of plumbers.So, Bowser's own personal hell, then. This screen is an homage to egg-grabbing, duck-dodging computer game Chuckie Egg, complete with the green bricks and ladders that make up that game. I presume that’s why all the toilet paper is white on this screen, it makes them look more like eggs? I guess? 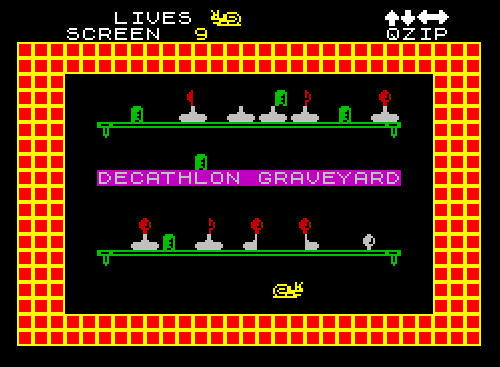 My favourite screen in the game is this one – it’s another reference to another famous game of the era, specifically the sports game Daley’s Thompson’s Decathlon. It was a sports game whose joystick-waggling controls were infamous for destroying peripherals, hence the Decathlon Graveyard, filled with Kempston joysticks that fell nobly in the line of duty. 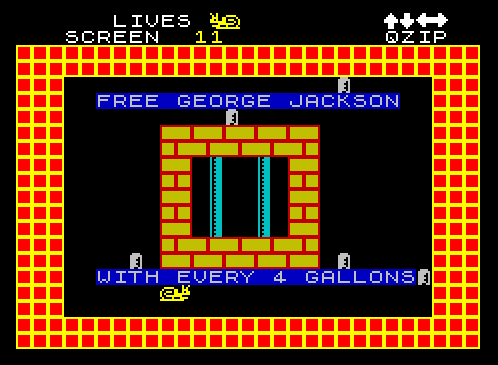 Screen eleven requires a little more explanation: “Free George Jackson” presumably refers to the activist and Black Panthers member George Jackson, imprisoned on an indefinite sentence in 1961 for armed robbery. The “with every 4 gallons” part is an attempt to make a joke about petrol station giveaways.
I say it “presumably” refers to the real George Jackson, but here’s the thing: not long before Toilet Truble was released, a character in the Liverpool-based soap opera Brookside called George Jackson had a plot line that saw him wrongfully jailed, and supposedly a band calling themselves “Blazin’ Saddles” released a song called “Free George Jackson” about the character. Now, I still think the actual, real George Jackson was the inspiration for this screen, but given the general tone of Toilet Truble I definitely wouldn’t be surprised if it was actually all about Brookside. 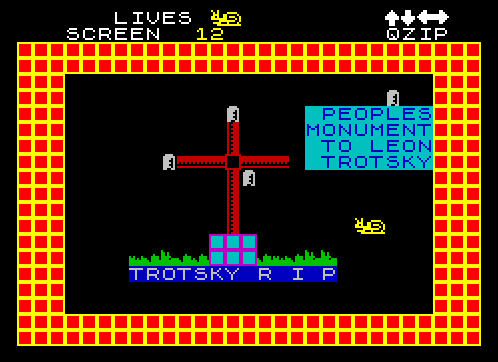 I’m… not sure how to take this screen. A genuine tribute to one of the founders of Communism? A statement that the only monument Trotsky deserves is one built from scaffolding poles and covered in filth? Whatever the intended message, I’m controlling a snail that’s trying to collect bog roll from Leon Trotsky’s grave, which is a good example of why I enjoy playing ZX Spectrum games. 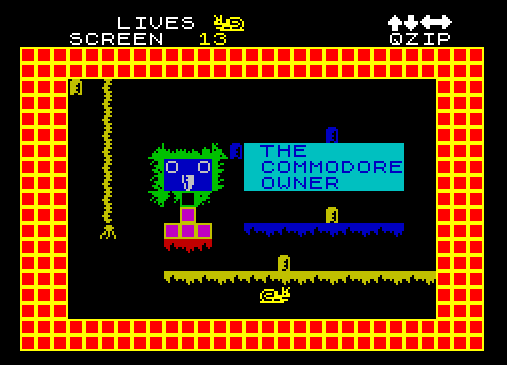 Ooh, sick burn on Commodore 64 users! That’s right, folks: the rivalry between these two powerhouses of the 8-bit home computer scene was no less bitter than the Sega vs. Nintendo wars of the nineties. The decision to depict the Commodore owner as a having a bleeding Tetris block for a body and the face of a confused owl poking its head through a mossy tree stump is a strange one, but it’s effective at communicating a certain amount of contempt. 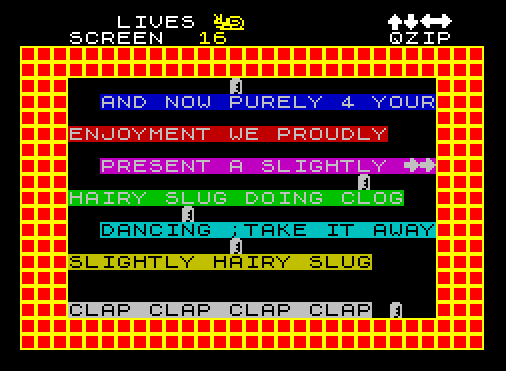 Probably the most frustrating stage to play, thanks to its preponderance of narrow corridors that allow for absolutely no mistakes, is also another of my favourites. The whole “hairy clog-dancing slug” bit is veering towards the obnoxious side of wacky, but it is totally redeemed by having “clap clap clap clap” written out at the bottom, which is so daft that it genuinely made me laugh out loud. 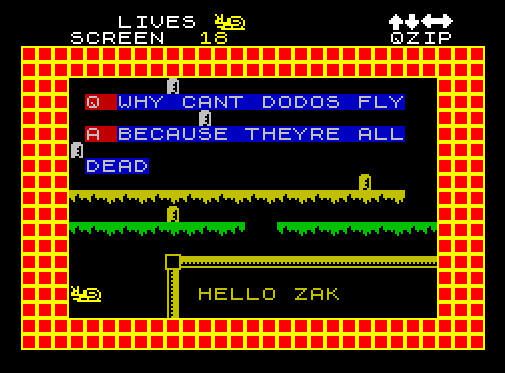 A couple of the screens towards the end forego any attempts at setting a scene and straight-up tell you a joke. It’s not a bad joke, in this case: it got a chuckle out of me, because I do appreciate the occasional blunt anti-joke. 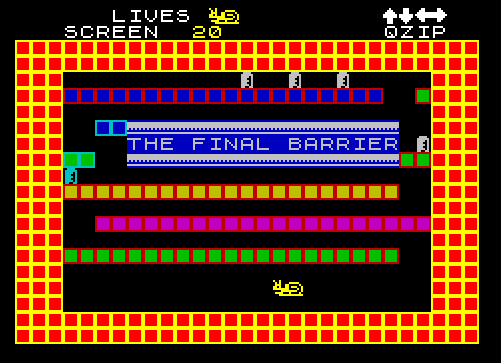 The final screen is disappointingly dull, with no mention of old computer games or Marxist theorists. It’s just an extremely difficult series of narrow passageways, so at least it does a good job of summing up Toilet Truble as a whole: awkward, frustrating and not much fun to play. Twenty screens might not sound like a lot, but in this case it’s probably more than you’d want to play through, and good luck getting more than five screens in with either cheating or spending hour after hour practising. Have a guess which of those solutions I opted for. 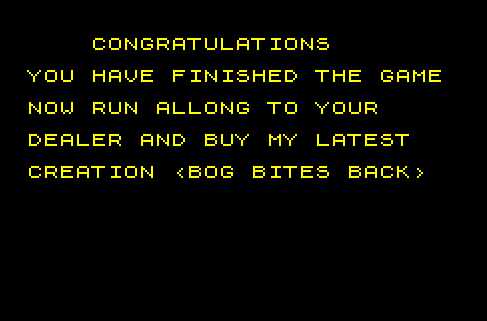 I dearly wish I could rush out and get a copy of Bog Bites Back, but sadly I can’t find it anywhere and it may not have actually been released. That’s a shame, because I’d have loved to see what came after Toilet Truble – and I do mean see, not play. Toilet Truble’s gameplay isn’t nearly good enough to get me excited about struggling through a potential sequel, but the look of it, the weirdo premise, the dumb jokes – they kept me thoroughly entertained. Am I easily pleased? Apparently so.