It seems as though it’s become traditional for me to start these year-end reviews by saying “man, what a horrible, wearisome year 2015 / 2016/ 2017 / 2018 (delete as appropriate) was on both a personal and a broader social level.” Perhaps 2019 will be less dreadful, but I wouldn’t bank on it. My plan is to start putting a pound in a jar every time I see something on the news that makes me say “what the fuck,” and with Brexit coming up I reckon that by around April the jar will be full enough for me to buy a small uninhabited island to live on.Actually, I’ve got a lot of big life changes coming up at the start of the year and they’re going to affect how much time I can put into VGJunk. There’ll definitely be fewer articles and probably a very irregular schedule. It sucks and I’ll miss spending so much time writing bad jokes about old videogames, but that’s life. For now, though, let’s take a look at some of the winners and losers from 2018’s batch of articles! 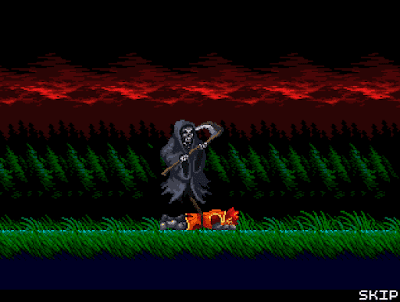 I really wanted Super Star Wars to be a better game than it is, because the graphics and sound make it feel like the closest thing to actually being in a Star Wars movie that 1992 could offer… but the gameplay is a frustrating, overly-difficult mess of endlessly spawning bad guys and pain-in-the-arse platforming. However, I suppose it’s not technically “disappointing” because I already knew Super Star Wars wasn’t great, so instead this award goes to the mobile game Castlevania: Order of Shadows. Don’t get me wrong, I wasn’t expecting a mobile phone adaptation of Konami’s famous franchise to be some hidden masterpiece, but I hoped it would at least be competent. Order of Shadows is not competent, with awful, unresponsive controls and combat that has all the heft and weight of a moth’s fart. Oh, and a special mention should go to Ghoul Patrol for not being nearly as good as Zombies Ate My Neighbors. 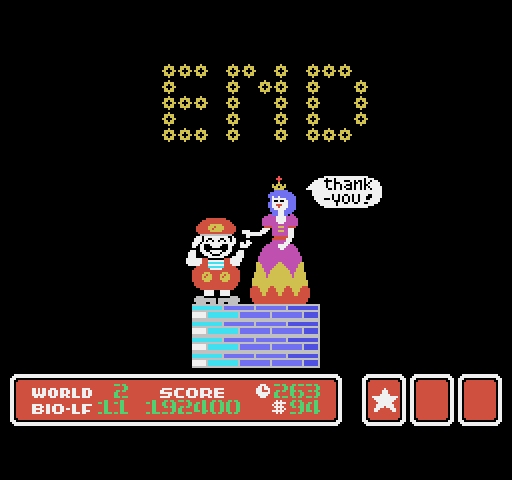 A hard category to judge this year, because I mostly played straight-up bootlegs a rather than legitimate, official games that copied from their peers. There was Jue Zhan Tian Huang, the knock-off beat-em-up that stole sprites from King of Fighters and Street Fighter games to create a side-scrolling brawler that just went on and on and on in an unrelenting death-march of tedium. Oh, and there was Black Touch 96, the other brawler with stolen sprites (and mildly saucy anime girl pictures). I think I’ll have to give this one to Master System platformer Super Bioman 1, the Super Mario Bros. 3 clone starring a Teletubby and “turtles” that look like the result of crossbreeding a turtle and an army helmet. I certainly appreciate Bioman’s sheer cheek, and it ends up being kind of cute in its own off-brand way.


Biggest Waste of A License 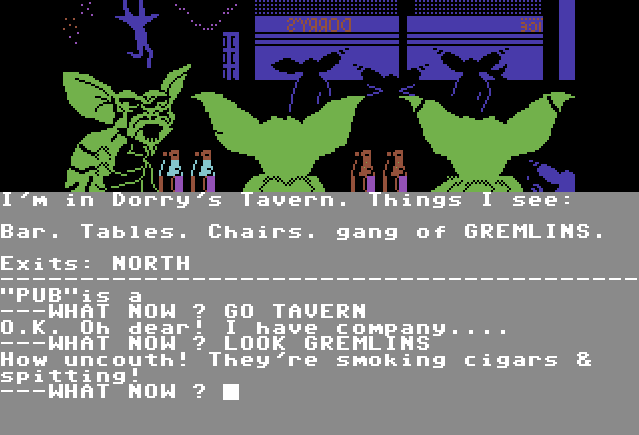 I suppose you could argue that turning Street Fighter II into a whack-a-mole game is a “waste” of that franchise’s famous stars, but Ken Sei Mogura: Street Fighter is such a bizarre thing that’s it’s hard not to be glad it exists. I suppose my pick for this category would have to be Gremlins: The Adventure, which wasn’t a bad game but which could have done with a lot more gremlins and a lot less time spent welding metal plates. 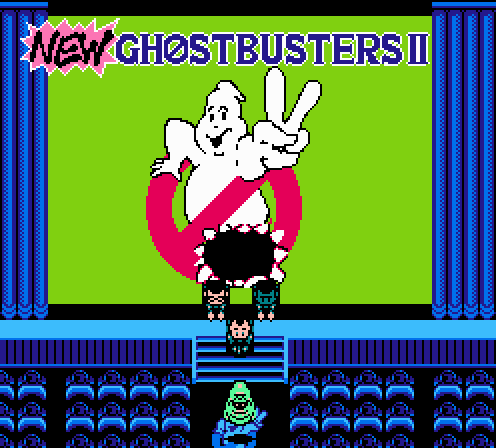 Sunman might be an unpolished, unreleased NES Superman game with all the Superman stuff scrubbed off and replaced by a very generic superhero, but it turned out to be more enjoyable that I was expecting and with some extra work I could have seen it becoming a cult favourite. Even better than Sunman was New Ghostbusters II, the never-released-in-the-US movie tie-in. Having played other Ghostbusters games before I didn’t hold out much hope, but New Ghostbusters II turned out to be a really enjoyable slice of top-down zap-n-trap action, with a fun buddy system, adorable graphics and a fantastic soundtrack. Plus, writing about it also lead to actor Peter MacNicol seeing the sprite of himself as creepy baby-snatcher Janosz for the first time ever, so that was fun. 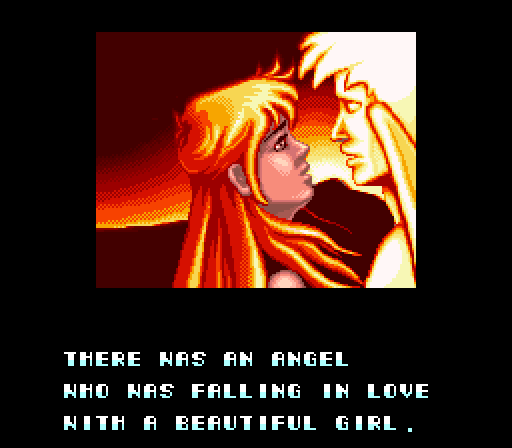 There’s no competition for this category – the prize goes to Super Duck, the arcade game that tells the story of an angel who falls in love with a mortal girl. Then the mortal girl is kidnapped by The Satan, so the angel asks God for help. God’s plan is even more ineffable than usual, because he turns the angel into a duck. The duck travels into Hell. The duck fights monsters by farting on them. I squinted so hard and said “huh” so loud when I saw this that my face almost turned inside-out. 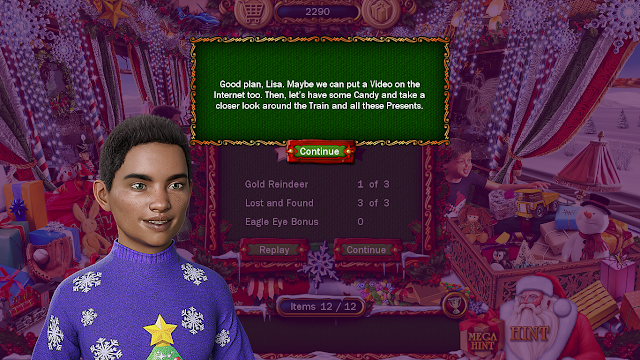 A lot of good examples this year, as there are every year, so let’s begin with one I covered recently; it’s festive HOG Christmas Wonderland 9, and some very strange capitalization from a child who is almost certainly some kind of undercover android on a mission to infiltrate Santa’s lair.

I also enjoyed this worryingly smooth dog from VR Troopers on the Megadrive asking for pizza. Having watched through The Sopranos multiple times, it’s hard not to read “I’m starvin’ here!” in a thick New Jersey accent. 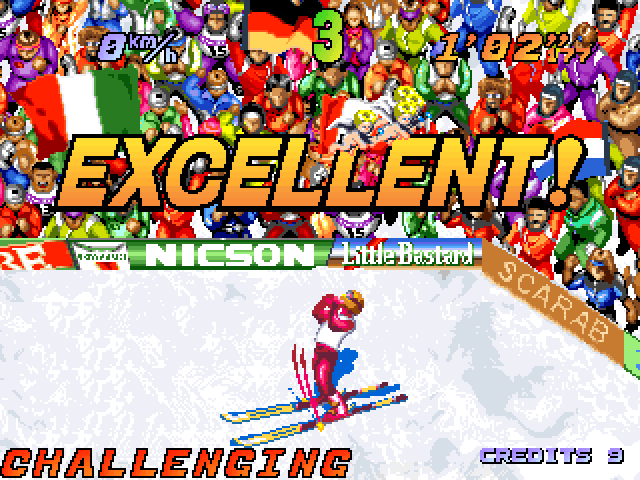 The winner has to be the billboards in arcade skiing game Extreme Downhill, though. The hoardings that read “GOD SAVE ME!” are pretty good, but even they are topped by the ones that simply say “Little Bastard” with no context or explanation. 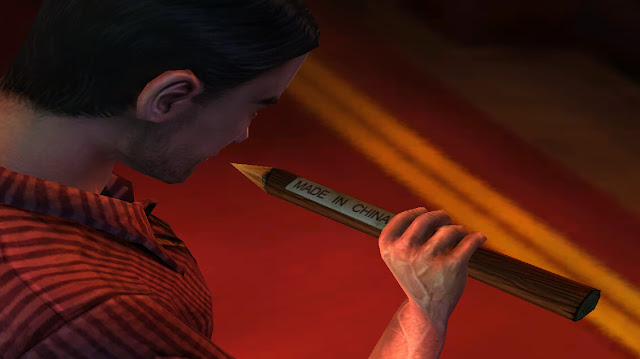 The moment in the fantastically daft Sinister City when the main character slowly rotated a vampire-slaying stake to reveal it was made in China genuinely made me laugh out loud. You could also include a screenshot of the part of the game where a vampire presents a kid’s TV show while dressed as an evil Teletubby. That was good, too. 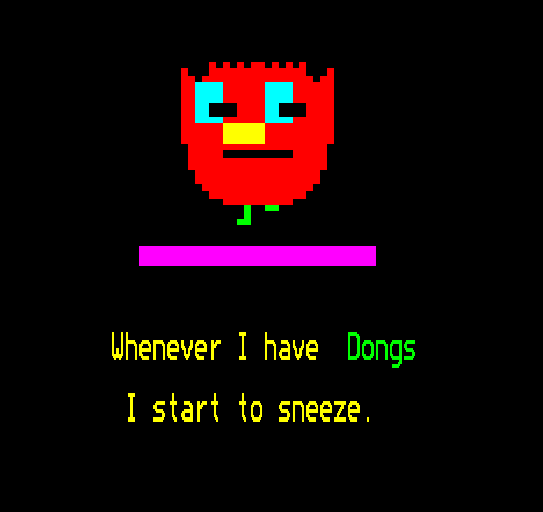 It turns out I can still be far more entertained by my own immaturity than I probably should be, as proven by this screenshot from Granny’s Garden where I entered “dongs” as a favourite food. 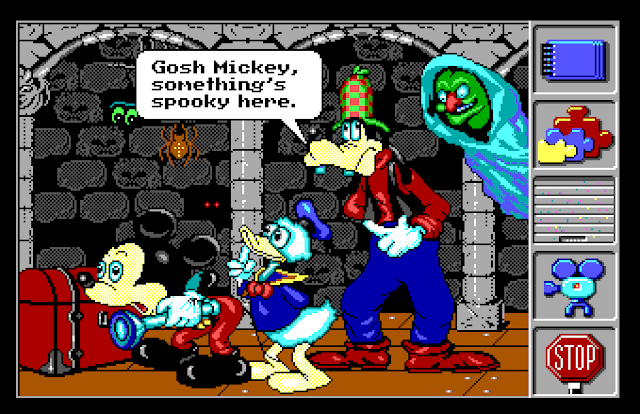 For pure hilarity, however, nothing else from this year can top Mickey Mouse’s facial expression from Mickey’s Jigsaw Puzzles. He looks like he was killed by accidentally sitting on a large metal spike before being stuffed by taxidermist with no hands.

I’ve already mentioned a couple of contenders for this category, with HAL turning in a fantastic set of tracks for New Ghostbusters II and Super Star Wars’ use of the movie’s soundtracks being one of the best things about the game. Another candidate would be the varied and often surprising soundtrack from Namco’s experimental arcade fighter Knuckle Heads. They’re all good picks, but top of the charts for me is The Surf Coaster’s surf-rock soundtrack for Felony 11-79 – the perfect accompaniment from that game’s hectic (and occasionally janky) smash-and-crash racing action. 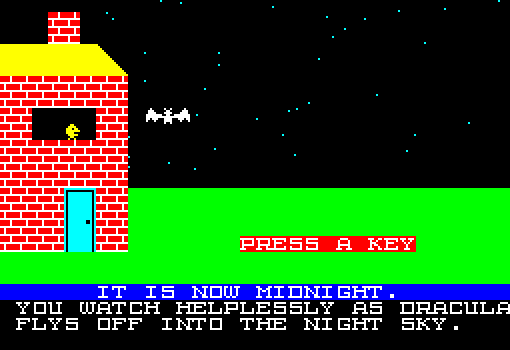 This year, I played a bunch of bad games but surprisingly few that lurched out at me as heinous, hateful abominations. Many of them were technically functional but simply very boring, like the seemingly endless Jue Zhan Tian Huang or WWF Wrestlemania: Steel Cage Challenge, a game that takes the larger-than-life razzmatazz of professional wrestling and does an almost frighteningly good job of sucking all the fun and colour out of it. Oh, and who could forget ZX Spectrum “game” SAS Combat Assault, which featured neither combat nor assaults (and I’m dubious abut the main character’s SAS credentials, too). However, I had a good long think about it and I realised that the game I hated the most this year was Vampire Killer. It's a tedious, pointless, unpleasant slog where you drag an arthritic idiot through a series of identical hallways. Nothing you do is important, everything happens at random and opening the wrong door sometimes sends you right back to the beginning of the game. Awful, absolutely awful. 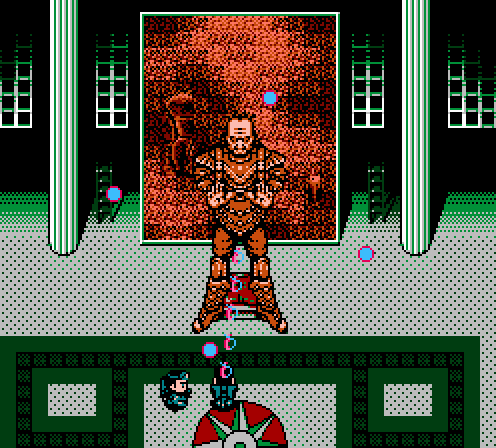 It must have been a mediocre year all around, because just as I didn’t play much that was punishingly bad, I also played little that struck me as truly excellent. So let’s dial it down a notch to “pretty good” games – I played a few of those. Splatterhouse 3 continued the franchise’s dedication to beautiful, gore-drenched horror atmospherics and probably has the most enjoyable gameplay of the series, so that was fun. Felony 11-79 is a fiddly, wonky game with strange handling and collisions, but that’s partly what makes it so charming, and when you’re barrelling down the highway and swerving between obstacles, it all clicks and makes for a madcap experience that still feels fairly unique. World Cup Striker is an exciting, all-action football game that plays at a breakneck pace. But you know what? I think I’m going to give it to New Ghostbusters II. It’s just fun. Good, honest fun, especially if you like Ghostbusters as much as I do. Sure, the battle against Janosz drags it down a bit, but I’ll forgive it that one blip. Of course, the only reason it’s getting my “best game” award is because there wasn’t another Halloween: Trick or Treat game for me to play this year – and Christmas Wonderland 9 definitely didn't fill that particular gap. 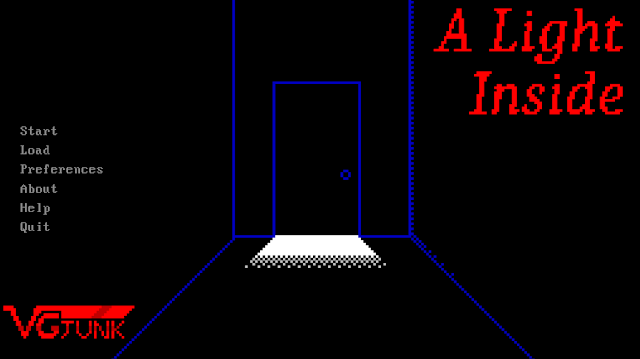 I always enjoy doing articles about cover art, so the ones about snooker games covers and spooky computer game artwork stand out as being a pleasure to write. I also thoroughly enjoyed complaining about Castlevania: Order of Shadows, and I had a lot of fun with the wild, vampire-filled ride that was Sinister City. That said, I’m going to cheat and pick something that’s not an article for my favourite thing on the site this year – instead, it’s A Light Inside, the short visual novel I made for the site’s anniversary. I still feel some residual pride that I managed to create it all in about two weeks, although I haven’t looked at it since and I’m sure if I played it now I’d hate every single aspect of it. That’s just how my brain works, folks.

Well, there we are. That was 2018 here on VGJunk, and I hope you all enjoyed it. Thanks as always for reading, commenting and sharing the site of social media and whatnot, and feel free to let me know if there was an article that you particularly enjoyed this year. I have no clue what the future holds for VGJunk, but I hope there’s still be some entertainment to be gleaned from this sort of nonsense. I suppose we’ll just have to wait and see.