Back once again – three small words guaranteed to get “Renegade Master” stuck in my head – with a fresh set of five miniature moments from a variety of games, it’s the return of the VGJunk Ephemera series! Yes, it’s another selection of inconsequential bits of game that make me say “nice” whenever I see them, or at least they would if I was in the habit of talking out loud to myself as I play videogames in my lonely shame-zone.

When I wrote about the summons of Final Fantasy V, I mentioned that I’m fond of the Golem summon whenever he pops up, and I particularly like his appearance in Final Fantasy Tactics. 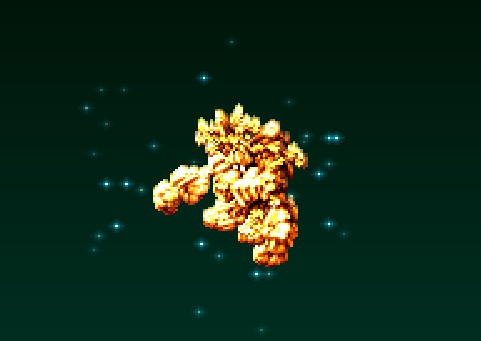 Here is the FFT version of Golem, looking like The Thing going through an awkward teenage phase. Even for something made of rocks, this Golem really looks like he’s made of rocks, as though the rabbi (or whatever the Ivalice equivalent of a rabbi is) who created this particular Golem was distracted half-way through the carving process. Just because he's taken the form of a fossilised mound of chicken nuggets doesn’t make him bad at his job, mind you, and when you summon the Golem your characters are still placed under his protection. This means that when a physical attack comes your way, the Golem’s hand appears and blocks it, and it looks like this.

It’s specifically this animation that makes FFT’s Golem my favourite. The satisfaction of your enemy’s attack being casually rebuffed is nice, but it’s the way you see them actually hit Golem and rebound from the impact that makes me like it enough to write about. I appreciate the surreality of the entire thing, too. There was no way that ninja was expecting, when he started swinging his blade, that a huge stone hand posed in the universal gesture for “no” would appear and take the hit.  Presumably the sudden jarring impact also dislocated the ninja’s shoulder, and the fact that the ninja doesn’t take any damage is a rare flaw in an otherwise excellent game.

Sticking with animations but moving on to Nintendo’s classic wet-slalom-em-up Wave Race 64, which is one of my favourite games on the Nintendo 64 and is still a lot of fun to play even now thanks to its sunny atmosphere and excellent water physics. One thing that Wave Race 64 lets the more confident / arrogant (delete as applicable) player do is perform tricks while they’re jet-skiing around the game’s courses, and my favourite of these stunts is flopping around in a circle on your stomach.

With the possible exception of some other straight sports games like Tennis, Wave Race 64 might be the most “realistic” game Nintendo have ever produced, and that’s why I love this animation so much – having played Nintendo’s other racing games, you might expect this spin to be flashier, to put the “buoyant” in flamboyant, but no. This looks exactly like a slippery person attempting an ill-judged trick in choppy seas, and there’s something about it that’s terribly charming to me. Maybe it’s the way the rider doesn’t react when they land and the jet-ski slams into their midriff, grimacing through the pain in an effort to look as cool as a person in a life vest can look. Who knows for sure? The heart truly is a mystery, but one thing is clear: the first thing I’ll be doing after I finish this article is playing Wave Race 64 and making my character spin around in an undignified as manner as possible.

Goldeneye was unarguably the king of multiplayer shooters on the Nintendo 64, and its reputation as host of the best four-player murder-fests only seems to grow with every passing year. It’s a position I can’t really argue against, not when I played so much Goldeneye multiplayer that I’m surprised every time I see Pierce Brosnan and his head isn’t shaped like an improperly-stored cereal box. However, one overlooked N64 shooter that I had a lot of fun with as a young person was Acclaim’s Turok: Rage Wars, a multiplayer-focused take on the “time-travelling Native American fights dinosaurs” franchise. It had a solid core married to some fun weapons and interesting game modes, like the one where players randomly turn into monkeys. Still, that wasn’t quite enough to keep me and my friends hooked, so in an example of what is now called “metagaming” but was known back then as “pissing about,” we came up with our own game mode. 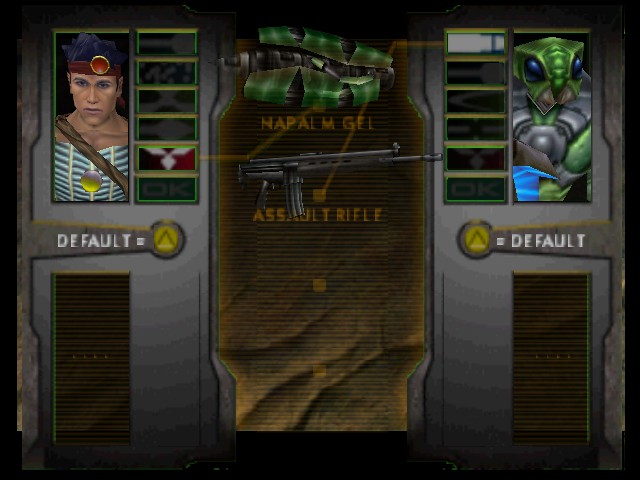 One of the weapons in Rage Wars is a napalm launcher. I know it looks like a poor first draft of a robot caterpillar, but it’s actually a gun capable of firing sticky napalm bombs that can be detonated at the push of a button, like so.

With the power of the napalm gel in hand, we devised a new four-player game mode. One team of two has the napalm launchers, and covers each other in explosive gel. Their goal is to kill the other team of two as many times as possible, but only using the splash damage of the exploding napalm. Thus, Team Napalm has to get as close as possible to the other team, gradually whittling down their health with repeated detonations, while their targets try to stay out of their way. A lot of Rage Wars’ stages are quite small and constricted, so that’s easier said than done, and when you add in the frantic bickering of Team Napalm as they demand that their team-mates blow them up right this instant, c’mon, he’s trapped in a corner, it makes for a frantic experience. Each kill earns a point, the teams switch roles at the end of the game and whoever scores the most points after x amounts of matches is the winner. In this way, I think it’s safe to say we extracted maximum value from Turok: Rage Wars.
On a related note, I tried playing some of the game to capture the GIF above. The default control scheme is that the analog stick is for looking around and the C-buttons move your character, and years of playing more modern shooters meant my brain simply could not handle the functions of each stick being on opposite sides of the pad to what I’m used to. It would only be slightly hyperbolic to say that it threw me into a dimension of pure confusion where the laws that govern our human world held no dominion.

As strange as it might sound, there are some games you can play that don’t involve computers or consoles. Who knew, right? One such game is Subbuteo, the much-beloved tabletop recreation of football where the exciting soccer action is controlled by flicking plastic players with rounded bases around on a green blanket. I mean flicking in the literal, with your fingertips, sense. A cherished part of many a young football fan’s childhood, my own included, Subbuteo’s popularity meant that a computerised version was a certainty and so it came to pass in 1990 when Goliath Game released Subbuteo: The Computer Game on a variety of formats. While it loses the pleasure that the tactile nature of real Subbuteo offers, a computer game version does make some sense. You might not be able to find a willing Subbuteo parter, and if you did there’s a fifty-fifty chance they’re the kind of uncultured barbarian who ignores the rules and does nothing but blast shots towards goal from all over the pitch. There is a clearly marked shooting zone for a reason, you idiot. Playing Subbuteo on your computer also has the advantage that you know none of your players are going to be broken: the ankles of the plastic figures are notoriously fragile and, much like the ankles of West Ham striker Andy Carroll, will snap if so much as a gentle breeze caresses them. This isn’t about the game itself, though, but specifically the screen where you select the colour of your team’s kit.

As seen here in the Atari ST version of the game, your players are presented as though they were a box of real, physical Subbuteo figures, complete with styrofoam packaging and a goalkeeper on a stick who looks like he’s in the process of being robbed at gunpoint. For comparison, here’s what a real box of Subbuteo players looks like. 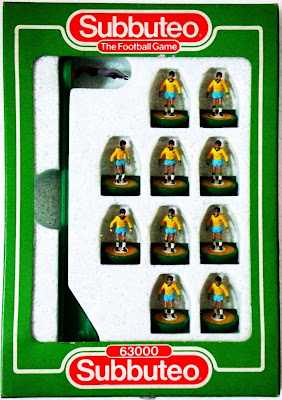 Without wanting to slip too deeply into wistful “when I were a lad” territory, there was always something slightly magical about seeing a Subbuteo team all boxed up like this, especially if it was some exotic and ultra-obscure team like Red Boys Differdange, or when you realised that Arsenal would make a perfectly good stand-in for Rotherham United. Looking at this kit-changing screen, I’m certain that whoever designed it felt exactly the same way.

Finally for today, a musical interlude courtesy of Squaresoft’s SNES masterpiece Chrono Trigger. It’s got one of the best soundtracks on the system - one of the best soundtracks period, even – and here’s one tiny thing about it that’s hardly vital to its success but which I’m still very glad of. At one stage in the game, our plucky heroes engage in battle with grumpy wizard and potential party member Magus, and the fight gets its own special musical theme. The whole track is great, but I’m here for the laughter sound effect that plays during the song. You can hear it at about 1:02 in this video:

I don’t have anything insightful or clever to say about it, I just think it’s super neat. I know some people hear it as baleful sobbing, but it will always be laughter to me. My only question is who’s laughing? It’s got a certain dopey quality to it, so I doubt it’s Magus. I can’t imagine him haw-haw-hawing like a drunken hillbilly. Although, Magus does say “if my fate is to die, then I must simply laugh!” at one point, so maybe he’s secretly a much more chucklesome fellow than his dour demeanour suggests.
One of the reason that I think it’s laughter rather than weeping is that I’ve listened to the Brink of Time album, a collection of acid jazz Chrono Trigger remixes. Magus’ battle theme is covered on the album, complete with laughter.

You can hear it at about 47 seconds in, and while it’s (rather impressively) played on a guitar now that’s definitely a laugh. There you go then. Case closed. Chrono Trigger is a game that laughs at those who play it. That’s fine by me, frankly. I’ve had so many happy hours playing Chrono Trigger that it could steal my girlfriend and slap my mother and I’d still love it.