“Can you tell me how to get to Sesame Street?” goes the theme song, and if today’s game is any indication you should probably try checking the bargain bins of your local videogame retailers at the turn of the millennium. It’s Bonsai Entertainment’s 2001 undeserving-of-the-plural-em-up Sesame Street Sports for the Game Boy Color! 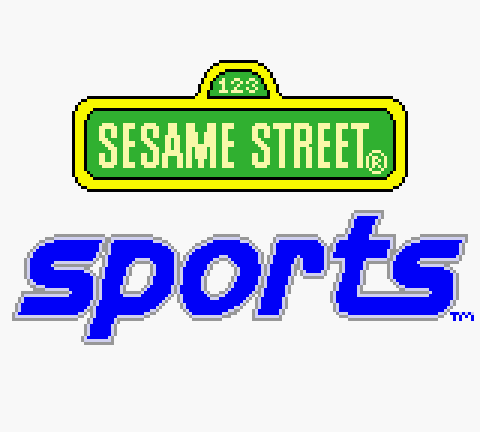 Yes, it’s a Game Boy Color game based on a kid’s TV show. A terrible fate to befall any children’s franchise, and an especially cruel blow for something as universally beloved as Sesame Street. But maybe I’m too hasty in my judgement. Sure, games like Rugrats: Totally Angelica, Doug’s Big Game and The Tweenies: Doodles’ Bones have set a dreadful precedent, not to mention shaving years off my lifespan, but this is Sesame Street we’re talking about. Surely the muppet-based joie de vivre of Sesame Street is beyond the corroding influence of a zero-effort GBC cash-in? Well, yes and no, as well shall see. 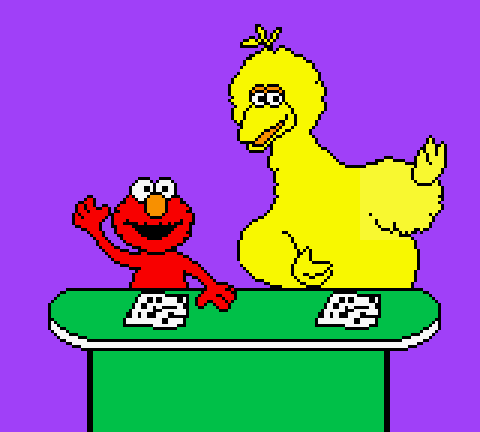 Hitting start brings up a screen of Elmo and Big Bird, who seem to be commentators for the events ahead. At least, commentators is what they’d be if they ever commented on anything. Instead they resolutely maintain their silence, only offering the player their glassy-eyed stares. Big Bird in particular has the expression of someone who knows that neither he nor the player have any idea what they’re doing here, and he sympathises. 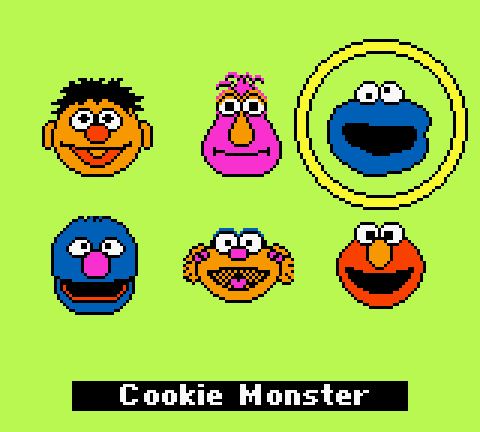 Time to pick a character, and all your favourites are here! Not my favourites, mind you. No Snuffleupagus, no Count von Count and worst of all no Oscar the Grouch. Given that I so often write about licensed Game Boy Color games, it should come as not surprise that I feel a kinship with a grumpy creature who surrounds himself with trash.
So, you’ve got Ernie, Telly, Cookie Monster, Grover, Zoe and Elmo to pick from. In keeping with the messages of free thinking and spontaneity espoused by Sesame Street, I’m going to break free of my usual insistence on beginning at the obvious starting point, which in this case is the top-left. Instead, I’ll be starting with Cookie Monster. Everyone loves Cookie Monster, right? Unless they run a biscuit museum, I suppose. Plus, that is a really great portrait of Cookie Monster, mostly because he looks completely mental. The Sesame Street sports spectacular gets underway with Cookie Monster on a space hopper, a phrase I never thought I’d have cause to use but I’m glad that I do. Cookie Monster is taking part is a kind of bouncy steeplechase, and he must reach the end of the course as quickly as possible. To do this, you hold right on the d-pad and press either A or B to jump – bounce, I suppose – over obstacles. 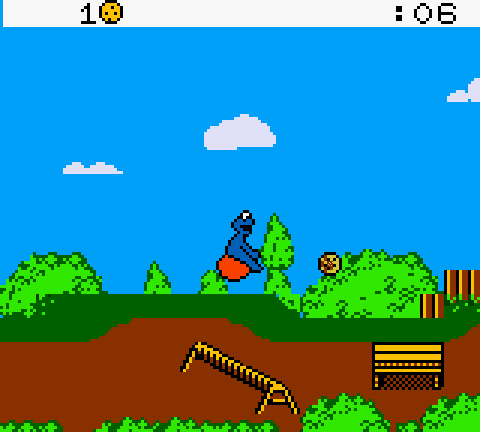 This being a Cookie Monster game, there are of course cookies to collect. Magical, hovering cookies. Jump into them to collect them. You do actually seem to be collecting them, too, and the number at the top continues to rise as you grab them. That Cookie Monster doesn’t immediately devour them strikes me as being against the very essence of his character, but what do I know? I haven’t seen an episode of Sesame Street in decades. Maybe he’s learned some goddamn self control since then. 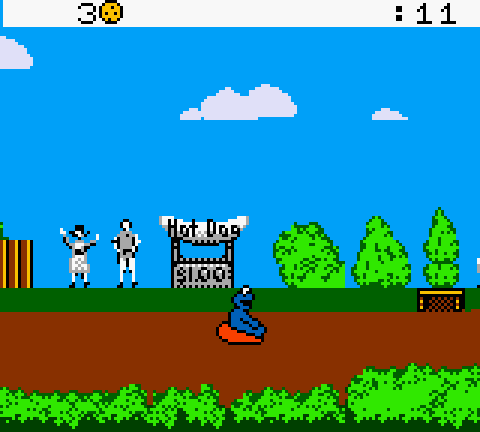 For a moment I thought that stall in the background was selling hundred-dollar hot dogs. The fact that I’m paying so much attention to the background should give you an idea of how engrossing the gameplay is. It’s easier to ignore as a “buy now” popup from WinRAR, frankly. In fact, I think it might be impossible to actually concentrate on, it’s so braindead. You move right and jump over things. Occasionally there’s a water fountain that propels you into the air so you can reach high-altitude cookies. It’s so simple a toddler could do it, which is presumably the point, but even most toddlers would quickly tire of it. 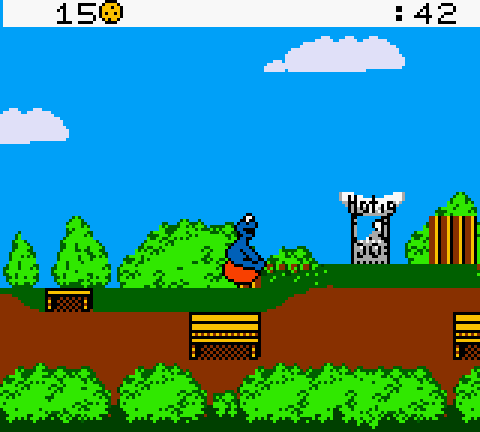 If your don’t fancy a hot dog, maybe you can hit this stall instead and buy yourself a Hotig. Delicious, mysterious Hotig, it’s good for what ails ya. How much does Hotig cost? JO, that’s how much. Wait, I’ve just remembered what “JO” is sometimes an abbreviation for. You can keep your damn Hotig, you sicko. 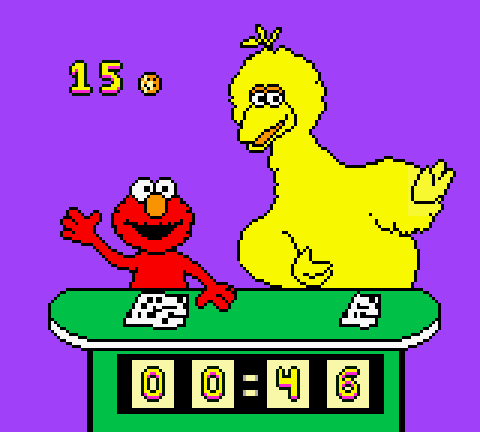 I collected 15 cookies and cleared the course in forty-six seconds, according to Big Bird and Elmo. Half of that time was spend grinding Cookie Monster up against obstacle to see if anything interesting would happen. It didn’t. 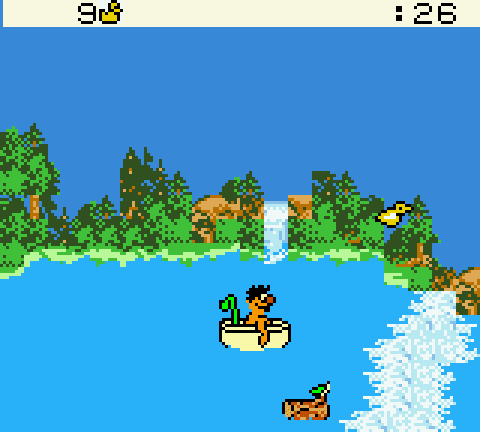 The sports odyssey continues as Ernie takes to the water in his bathtub. Not since the time of ancient Greece have sportsmen competed in the nude, but Ernie’s out to change that. Off he goes, down through the raging torrent, occasionally hauling his entire bathtub out of the river as he jumps to collect the rubber duckies scattered throughout. You might be thinking “that seems very similar to the previous stage,” but you’d be wrong. It is in fact identical to the previous stage, except with different graphics. 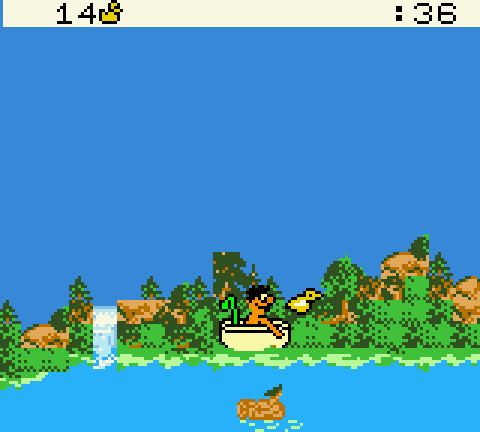 The most baffling thing about it is that you still have to hold right on the d-pad to move right, and the presumed current of the water has no effect on the movement of your bathtub. My only explanation for this is that the river is very shallow and Ernie has simply kicked his feet through the bottom of the tub so he can run, Flintstones-style, along the river bed. 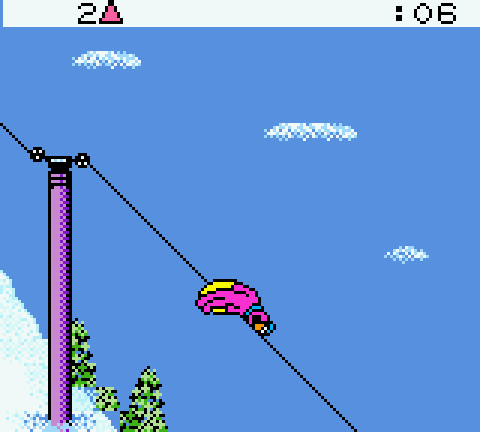 On to Telly’s snow-themed sledding event. He’s wearing a woolly hat to protect himself from the cold, bless him. However, it’s not going to protect him from the landing after this jump, an acrobatic effort that the experts would described as having “gone tits up.” I’m kidding, of course. You can’t hurt a muppet. They’re made of felt, for a start, and Telly will always land on his sled no matter how you hurl him. I did hurl him a fair bit, too. It seemed appropriate, given that he’s racing down a hill on a plastic tray… except he isn’t. Just like the other two stages, you have to manually move Telly to the right, despite the fact that he’s sitting in a sled atop an icy slope. At least with Ernie you could argue that maybe his bathtub is more of a boat and it’s equipped with an outboard motor or something, but Telly’s complete disregard for the force of gravity is impossible to justify. They could have made his stage a little different but no, it’s exactly the same. On the plus side, that snowman is fairly adorable. 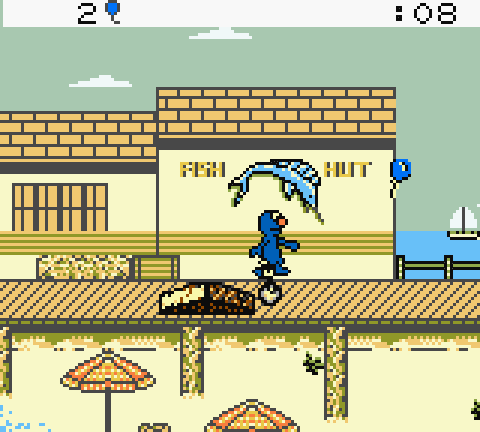 It’s Grover’s turn now. He’s on a unicycle, teetering his way past the Fish Hut, which I assume is like a Pizza Hut but they only serve fish. Only serve fish as food, I mean. The Fish Hut is on land, so it's unlikely to sustain itself on a fish-only clientele. I’ve always had a soft spot for Grover, probably because as a kid I had a Grover soft toy. The arms of said toy were long enough for you to knot together so you could wear him like a cape, much as an ancient hunter might wear the pelt of a mighty beast he’d slain. 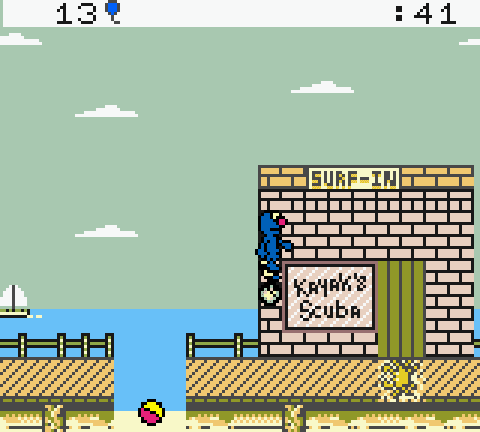 I see that misplaced apostrophe, Sesame Street Sports. That scuba hire business better be owned by someone called Kayak, otherwise I’m going to have to write a strongly-worded letter about this betrayal of the educational principles that Sesame Street stands for. 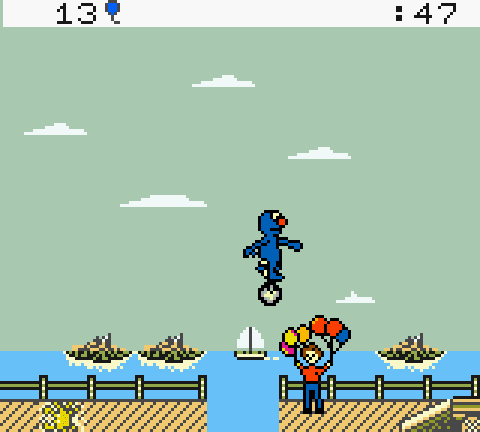 All the stages have a certain item – cookies, rubber ducks and in Grover’s case, balloons – that you can collect, although as far as I can tell there’s absolutely no reason to collect them and no punishment if you don’t meet some vague balloon quota. This makes it all the more confusing that in Grover’s stage, there’s a small boy with a bouquet of balloons standing around at the end of the stage. Grover can take all the child’s balloons and saunter away. Grover, you arse, you don’t even need those balloons. 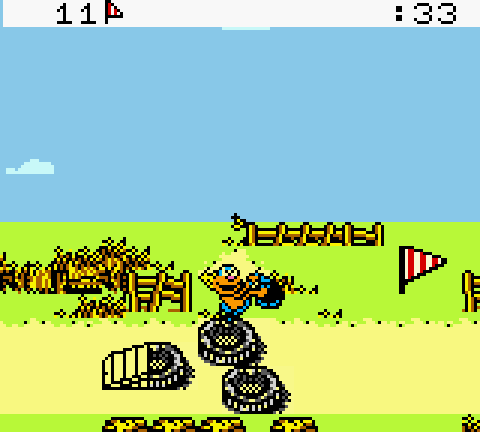 Next up is Zoe’s dirt-bike track, and it’s probably the most boring of the lot. That was a hotly-contested category, let me tell you. It’s the same move-right-and-jump gameplay as all the others – loose, floaty jumps married to a complete lack of challenge – but with a blander background. 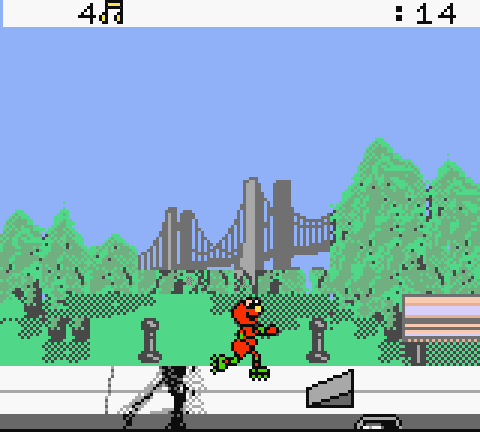 The final stage is Elmo’s rollerblading, musical-note-collecting extravaganza. The inquisitive little furball skates his way through a part of Sesame Street that’s in dire need of some pothole repairs. I can sympathise, Elmo. Some of the roads near my house would give the Mars Rover a real challenge. 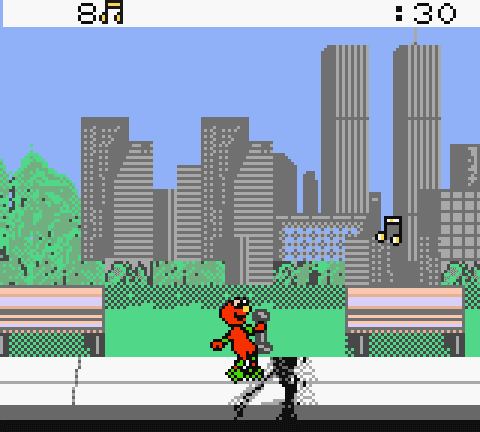 I don’t think thrusting your groin at the potholes is going to help, Elmo. 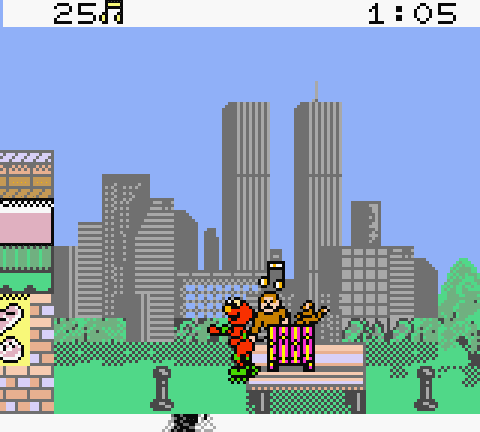 Oh look, it’s the Twin Towers. This game was actually released a few weeks after 9/11, which is a little unfortunate for the developers. Still, it’s a Sesame Street game. I’m sure nobody took umbrage.
Let’s focus instead on the musical monkeys. Their organ constantly pumps out musical notes that Elmo can collect. As mentioned, Elmo has no reason to collect the notes, but maybe you’re really into racking up high scores and you have a lot of free time. The best thing about this organ is that it’s being operated by a monkey who has another, smaller monkey as his assistant. Having spent years watching his human captor operate the organ while forcing him to dance, the monkey could take no more and rebelled against his master. Given that chimps tend to go for the eyes and the testicles when they attack, it probably wasn’t a pretty sight. However, the monkey knew of nothing of life but the organ grinder’s trade, and so he enslaved a smaller monkey and become that which he most despised, setting in motion a dark and terrible cycle of events. I’d keep a close eye on Monkey Jr., if I were you.
Once you reach the end of Elmo’s stage, that’s every “event” completed. What’s your reward for mastering such varied disciplines as “bouncing right and jumping” and “floating right in a bathtub and jumping”? 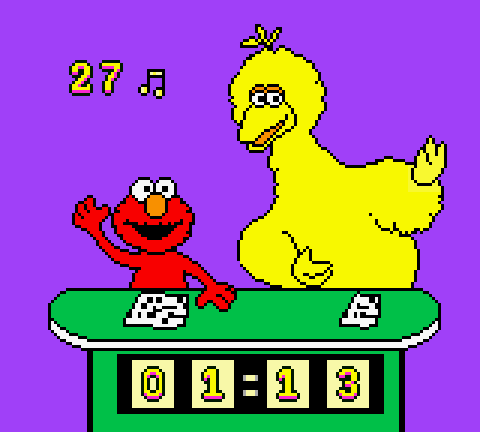 Absolutely bugger all, that’s what. Not tallying up of your scores, no congratulatory messages, not even a heartfelt thank-you for somehow managing to stay awake for the entire game. It’s straight back to the character select screen for you, bucko. Repeated playthroughs and further investigation bore no fruit, so I have to assume that this really is all that Sesame Street Sports has to offer. It’s an astonishingly slight amount of gameplay, and the gameplay that is there is so boring that it borders on pre-surgery anaesthetic levels of sleep-inducing. It’s a game for kids, sure, but none of the developers seem to have much of an idea about what kids might want to play. When my nephew was three he was playing much more complex and engaging (and educational) game than this, and Sesame Street Sports would have bored him into discarding it after about five minutes. The nicest thing you can say about it is that the gameplay works as (presumably) intended and that some of the graphics, particularly the characters themselves, look fairly decent, but it’s still got that stink of cynical money-grabbing all over it. It's too much of a non-entity to really hate, though - unless you were some poor child who spent their pocket money to buy it. It is my sincere recommendation that you watch an episode of Sesame Street rather than playing Sesame Street Sports. You might even learn something, although if you’re short of time please note that watching a full episode of Sesame Street takes about four times as long as playing through this game.