People always complaining that you spend too much time watching TV? How about that old chestnut that videogames will rot your brain? Dammit mum, leave me alone! Well, why not combine the two into one synapse-frying cavalcade of fun (cavalcade not guaranteed) with Imagineering's 1993 SNES our-survey-said-em-up Family Feud!

If you're British you'll probably know this better as Family Fortunes, the quiz to find the most obvious answer, formerly presented by human punchline Les Dennis and currently hosted by Boltonian charisma vacuum Vernon Kay. It now goes by the name All-Star Family Fortunes, although this is something of a misnomer as the fame level of the participating celebrities is so low it makes Come Dine With Me look like the Oscars afterparty. 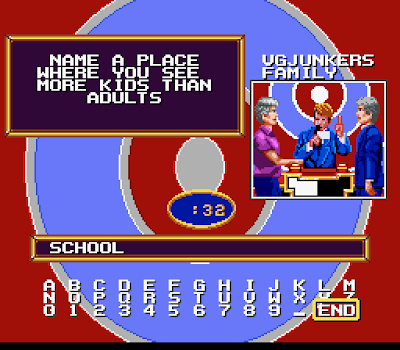 I could make the point that the name-change from Family Feud to Family Fortunes highlights a cultural division between the US and the UK: the original name is angry, combative, while the British version focuses more on the rewards of the game (because, as a nation, we are greedy). It probably got changed for a really boring reason like copyright issues, although I personally would have changed it anyway because the phrase Family Feud conjures up images of warring tribes of inbred mountain folk. 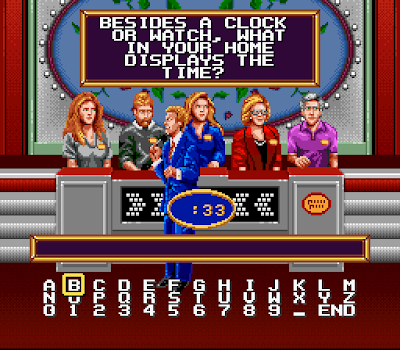 I'm getting ahead of myself, though - maybe you've never seen Family Feud. Perhaps you live in a country that doesn't broadcast some version of the game, although having seen the list of international versions this seems unlikely unless you're living in the undersea kingdom of Aquatica or North Korea. Maybe you're part of a government experiment to monitor the effects of light entertainment deprivation. Whatever the reason, a game of Family Feud goes like this: you're asked a question. In the example above, the question is "Besides a clock or watch, what in your home displays the time?" This question has also been asked to one hundred people, and it's your job to give the answer that the most other people said. 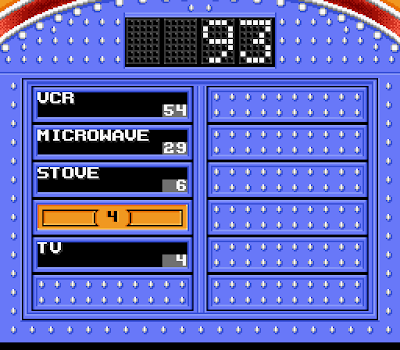 Obviously, you're going to say VCR despite the fact that this is 2012 and VCRs are now a relic of a distant, forgotten age. Still, fifty-four other people said "VCR" when asked the same question, so you get fifty-four points. I hope you're proud of yourself. Hang on, only fifty-four? This game was released in 1993! The VCR was the nineties' equivalent of a grandfather clock! Maybe half of the people quizzed were Amish or something.
There are a few other complications, namely that you have to find all the answers on the board to get the points. If you make three incorrect guesses, the opposing team can steal all your points by finding one of the remaining answers. Sadly an incorrect guess isn't accompanied by most famous part of the British version: the robotic "UH-UHH" noise that sounds like Robot Satan trying to be sassy.
There's also a final quick-fire round, but that'll be along in a while. For now, let's meet the families! 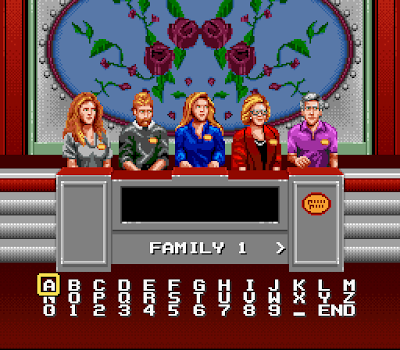 Second from left: Chuck Norris. Second from right: Lucille from Arrested Development. We can only assume that this isn't a family but is actually a government hit-squad comprised of people who can utterly destroy you (be it physically or mentally). That guy on the far right is their handler, which is why he looks so goddamn nervous. 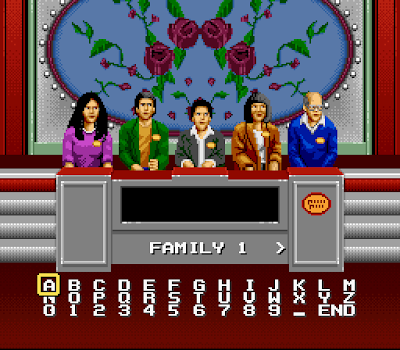 A normal enough family, but I'm a little worried about the guy on the right. I don't want to make snap judgements or anything but he looks like the kind of guy that... does things in the lingerie sections of large department stores. Keep those hands where I can see them, buddy. 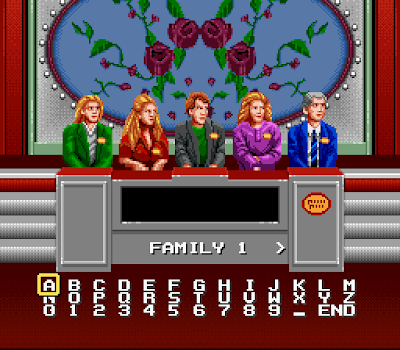 Ah yes, the Poshington-Smythes. So glad you could join us! I'm joking, of course - there's no way this family can be all that conservative given that the father's wearing a suit which I can only describe as really fucking blue. They'd never stand for that at the country club. At least, I assume he's the father: he could be a hostage for all I know, kidnapped for his vast knowledge of what one hundred people will say when asked a simple question. 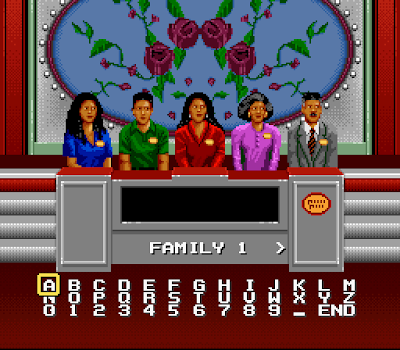 Here's the final family, and I guess they're pretty normal even if the guy on the right does look like J. Jonah Jameson. Hopefully there'll be a question about Spider-Man. Notice how they're all wearing the same perturbed expression, like someone just off-screen is singing nursery rhymes while dressed as a clown and stroking a stuffed cat. 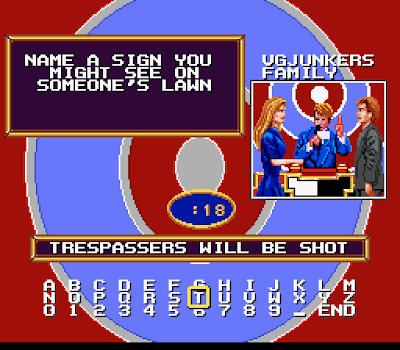 Once you've selected a family to represent you, the game begins. The first round is the Bullseye round, where you can add cash to the prize pot by finding the top answer and being quick on the buzzer. 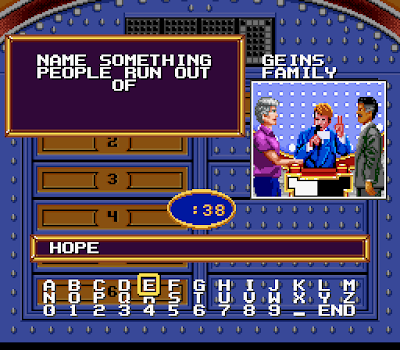 After that, you're on to the meat of the game as the two families attempt to complete the board. It's not exactly a complex gameplay system, but it works pretty well. All you're doing is typing the answers in by moving a cursor about, but it's pretty fast and while the game is strict about spelling it will quite often help you out if you don't put the exact answer it wants by accepting things like "video player" when the answer is "VCR". Of course, whatever system they used to implement this can go awry. For example, one of the questions I got was "After a child moves away, what do his parents use his room for?" 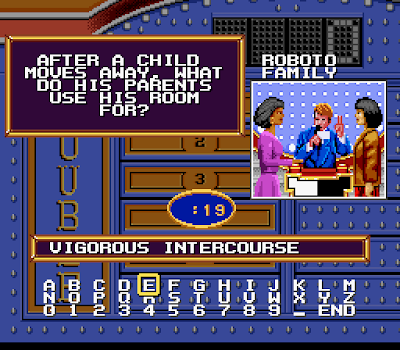 Being as immature as I am I entered "vigorous intercourse", because by this point I'd sort of lost interest. The game seemed to appreciate my "wit", though... 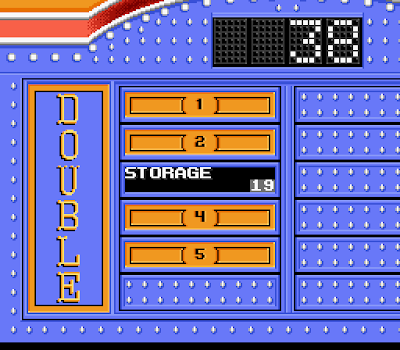 ...because it accepted it as a correct answer - "storage", to be specific. I really hope this was included by the developers as a little joke, because the alternatives are too bizarre to contemplate. Maybe "intercourse" is a slang word for storage in America. "I'm just going to intercourse these boxes in the intercourse locker". No... no, that can't be right. 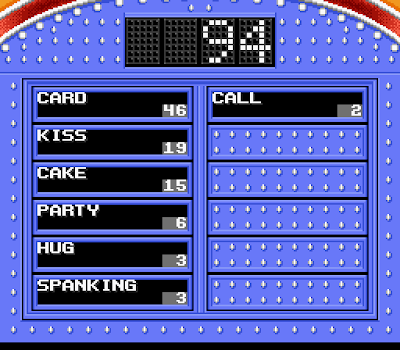 Then there are things like this. The question was "Things other than presents you give people on their birthday." I'd like to draw your attention to the sixth answer. Maybe where you're from, pal. I'd be disappointed if I was expecting a surprise party and instead I received a butt-paddling. At least it'd still be a surprise, I suppose.
So, it's a pretty decent game and it works well, but there a couple of other things that I particularly enjoyed about Family Feud that I'm not certain were intentional. First, and something that made me literally laugh out loud and was presumably unintentional, is the way the teams celebrate winning the round. The winners clap merrily, proud about their knowledge of the habits of one hundred randomly-selected peons. The losing side... they're not quite as impressed.

Look at those stony-faced bastards. Nobody likes a sore loser, Romeos.
The other thing is that, as I mentioned before, I'm pretty juvenile. If you're like me, that means you can derive a good amount of humour from the way the game makes it far, far too easy to enter unfortunate and borderline offensive answers. Like so: 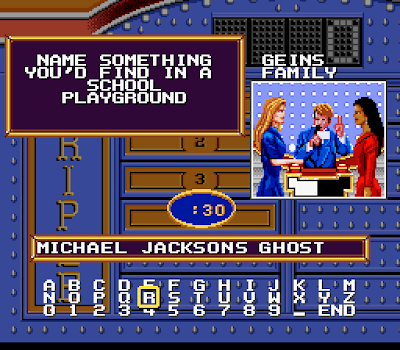 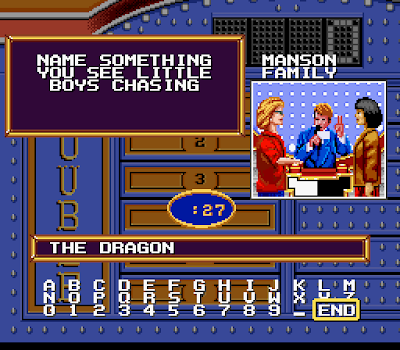 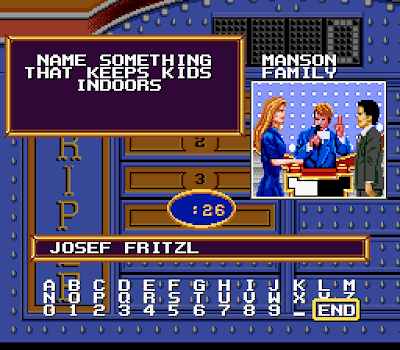 Sometimes the fruit hangs too low, even for me. 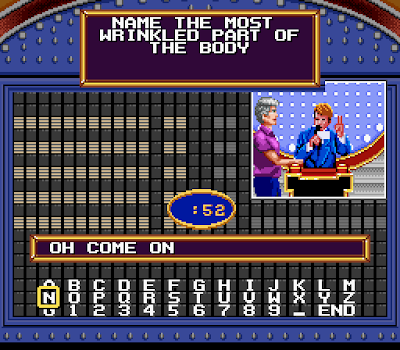 That's how to squeeze some more fun out of the game, at least. There's a metagaming suggestion for you: get some friends over, play Family Feud and award points based on who comes up with the funniest / most disturbing answers. 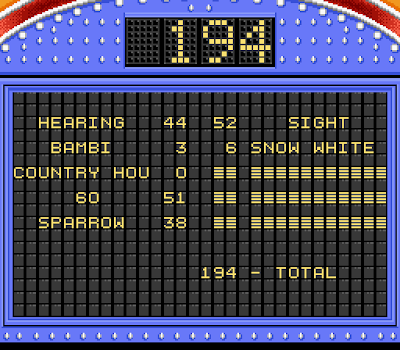 Oh, and there's the final round where two family members get the same five questions and must provide an answer each, hopefully reaching two hundred points overall and securing the big cash prize. It's a bit easier than on the actual show, because you're not supposed to be able to see what the other person's answers were and you can't submit the same answer twice, but the game handles it well enough. I was a little confused about the top answer for "place with big lawns" being "golf course", because they aren't lawns. They're, like, fairways and shit. If you try and have a picnic in the middle of golf course you'll quickly be ejected from the premises.
That's pretty much it, really. If you win, you can keep going as champions but once you reach $80,000 in winnings you're forced to retire in case you bankrupt the company. 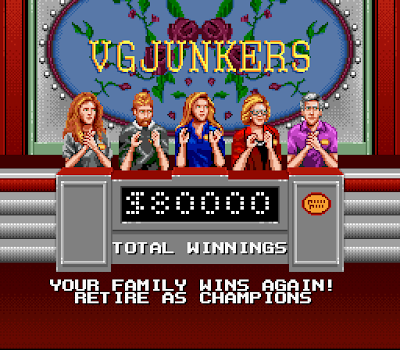 No fanfare or ceremony, not even a small glitter explosion. I suppose the cheque for eighty grand will salve the pain of not getting a parade.
Family Feud really isn't all that bad. It know what it wants to do and it does it pretty well. The presentation is decent if hardly mind-blowing and if you really want to play a TV quiz show on your SNES then you could do worse than this (for example Wheel of Fortune, which is dull as sin). The main thing I've taken away from this is that Family Feud is a game that wouldn't exist nowadays. Technology has advanced and there's nothing here that you couldn't do in a web browser. It'd certainly never be a full-price release on a current-gen console, and as such it's something of a relic of the 16-bit era.
It does have a lot of questions, though. I don't think I saw any repeated while I was playing, and I played it for quite a while. If you're wondering just how many there are, some madman on GameFAQs has transcribed every question and all the possible answers. It's a feat that makes me feel a little better about writing articles for retro games nobody cares about.