A while ago I wrote about ten of my favourite bizarre Final Fantasy enemies, because to my addled mind a vicious rabbit riding a floating lettuce and psychedelic toads are things worth writing about. A selection of just ten enemies simply wasn't enough, however - the Final Fantasy universe is home to so many freakish creatures that it makes the deep ocean look like a particularly disappointing petting zoo, one that only contains an arthritic donkey and a couple of uninterested guinea pigs. So, here are ten more weird FF enemies, a list inspired by my recent time spent with Final Fantasy V and my first encounter with these guys...

Furry death charges screaming from the skies! The Pusswaffe strikes in a whirlwind of scratching claws, knocking over ornaments and getting under your feet while you're trying to feed it! Yeah, it's a cat with hang-glider wings. That's just cruel. Why would you put wings on a cat and throw it into battle? All the cats I've ever encountered have not reacted well when I've thrown them through the air, and I've thrown a lot of cats. My data samples are big enough that I feel confident to say that very few cats like being thrown through the air, and fewer still possess the highly developed chest muscles and aerodynamic nature required to stay airbourne on home-made wings.
Of course, I'm assuming the cat didn't make the wings itself in some kind of misguided attempt to become a more efficient hunter of birds. This is Final Fantasy, after all. Maybe it did make the wings itself, but I wouldn't want to delve too deeply into the possibility as it would make a mockery of the concept of evolution. 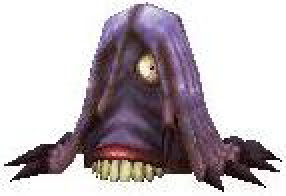 Where does Square get off calling this thing an Abomination, huh? Sure, it might look like something you'd find clogging the drains of someone who really, really loves blackcurrant jelly but that's hardly his fault, is it? Frankly, I think you should be impressed by the Abomination's front teeth, which serve it well in wintry weather by both acting as a snowplow and providing extra grip in icy conditions. It could help you clear your driveway after a heavy snowfall, and it wants to help. Just look into its eyes! Eye, I mean. Anyway, that's a facial expression that simply speaks of a certain nervousness when meeting new people, not an insatiable desire for carnage and death. Plus, it wriggles around on its little hair-tentacles and it's kind of adorable.

Just look at that face. Go on, soak it in. That neon-green seahorse couldn't possibly be any happier about being a neon-green seahorse, which is what makes him so weird. He shouldn't be happy - the only use for neon-green seahorses in this world is as a punchbag for any group of adventurers that happen to wander past. He'll be dead in seconds, but you can bet that he'll keep on smilin' even as he's filleted by each warrior's unflinching blade.

Well, it's definitely a face. You can't deny that. The Playstation version of FFVI may have re-translated its name to "Phaze" but there is no doubt that what we have here is a gigantic hovering face. It'd fit nicely into Gynoug. As such it raises a lot of questions, questions like "does it have a body somewhere?" and "how does it float?" and "why does it look so bloody smug? If I didn't have a body, I doubt that my overriding emotion would be smugness." Well, I can answer that last one - it looks so smug because it knows what's going on. Indeed I believe it may know that answers to all things, but Face's desire to do nothing but fight adventurers means that this vast repository of knowledge is now lost to us. What a smug prick. 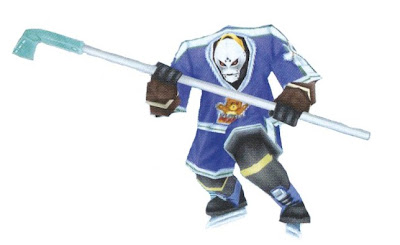 First off, I should point out that "slapper" means something else entirely here in Britain. That's fine for providing some juvenile snickering, but the real weirdness here is in how ordinary the Slappers are. They're just guys who were playing ice hockey when a rival school / mercenary training facility happened to crash into them. After the hordes of fearsome monsters, evil witches and elite military officers that Squall and company had previously fought, a quick dust-up with some guys carrying sticks must have been something of a relief. Personally, I'm choosing to believe that this entire encounter was orchestrated by the Slappers' coach as an impromptu training session designed to promote team unity. Sadly, all the team members were killed and the coach is now trying to drink himself into an early grave.

A squirrel with the name of death metal band, the Skull Eater is definitely adorable. That is, when he's not eating skulls. Look, he's got one is his paws right now! I think. It could be a grey nut or something. It doesn't actually look much like a skull, which might be because the Skull Eater is a palette swap of an earlier, less demonic squirrel enemy. I'm starting to doubt that these guys even eat skulls at all. They're probably just the squirrel equivalent of the unpopular kid who becomes a goth and changes his name to "Raventear Darknight" or something.

A muscular body covered in writhing tentacles and possessing a gaping, tooth-lined maw is pretty weird, I guess. Not all that weird for an FF game, though - you're unlikely to come across one in your local Tesco, but in the world of Final Fantasy they're probably the equivalent of chickens or cranky old ladies on the bus. No, I'm much more interested in his unusual pose: all I can see when I look at Balor is a monster caught in the middle performing a blistering air guitar solo, stopped in his tracks by sheer embarrassment as his father bursts into the room to find out what all the noise is about. God, Dad! Why don't you ever knock!? I hate you!!

The Marionetteer is an enemy that summons dolls to fight for her in battle. I find dolls pretty creepy, and the Marionetteer is not helping any. Don't be fooled by the fact she looks like a dragged-up version of Mr. Dink from Nickelodeon's Doug - there are no whimsical lessons about adolescence to be learned here.
I'm pretty sure that bird on her back is grooming her, too. Not only does she command an endless legion of sinister dolls, but she also has poor personal hygiene and is infested with lice.

It's a whip-wielding, semi-naked woman riding a flying tapir. There was little chance of the Alluring Rider not featuring on this list. The reason she didn't appear on the last list is because, erm, I forgot about her (which seems an unlikely thing to happen given that she's a whip-wielding, semi-naked woman riding a flying tapir, but there you go.) At least she makes slightly more sense than some of these enemies, because she does appear when you're trapped in the "Dreamscape" of one of your party members. This makes me wonder whether she was drawn from something the enemy designer actually dreamt about. I hope so - it'd have made the dreamscape planning meeting quite interesting.
"We need monster ideas for the Dreamscape area. What have you got?"
"Well, I did have a dream the other night that we could use..."
"Go on."
"Well, right, there was this woman, and she was naked from the waist down..."
"I see."
"And she had a whip."
"Okaaay. Well, we'll put it on the "maybe" pile."
"Oh yeah, and she was riding one of those animals that look like elephants crossed with pigs, you know, with the little trunks?"
"You mean a tapir?"
"Yeah!"
"She was riding a tapir. I see. Tell you what, we'll put that one to one side for now, shall we? And I tell you what, maybe you should take a little time off work." 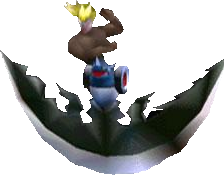 Both disturbing and comical, the Ghirofelgo is not someone you'd want to take anywhere in a dinghy. He fights by swinging around on a chain, determined to get some use out of his otherwise pointless lower half, but if you hit him hard enough he falls to the ground. There he lies, floundering around on the floor like a turtle that's been flipped on its back and has also had its flippers replaced with razor-sharp pendulums. You fight these guys in the Shinra Mansion so it's likely that they're the result of Professor Hojo's twisted experiments, in this instance an experiment into designing the world's most disturbing long-case clock.
Maybe they aren't Hojo's handiwork, though. Maybe they evolved, their unusual mutations spurred on by the high levels of Mako radiation in the area. If so, nature has dealt them a cruel hand. I can't see what their primary prey would be, unless there's a species of rodent in the Shinra Mansion that are so terrified by Poe's The Pit and the Pendulum that they suffer instantaneous and fatal coronary failure at the mere sound of a swinging blade.
You're right, that's just too fanciful. We'll stick to the original idea that Ghirofelgo are sentient beings who have had their legs replaced with pendulums in a grotesque perversion of science, forever doomed to swing from chain to conveniently-dangling chain in an abandoned mansion. Final Fantasy VII is a surprisingly dark game sometimes.

And there you have it, ten enemies to baffle the senses and make you wonder just why that seahorse is so happy. He must be up to something. Something fishy, even. Goodnight!

(All images taken from the Final Fantasy Wiki)
Recently on VGJUNK:
Angelic shooting action and disturbingly phallic bosses in Gynoug!
Hot-blooded somersaulting cops in Crime City!
One of the worst games ever made - Rise of the Robots!
Posted by VGJUNK