FINAL FIGHT: A TRIBUTE TO THE MAD GEAR TROOPS

Final Fight - the very name conjures images of a mayor ensuring re-election through vigilantism, ninjas and street brawlers fighting side-by-side, slabs of roast meat found in oil drums, meat presumably left there by the same health-dispensing deity that hides pot roasts in the walls of Castlevania. 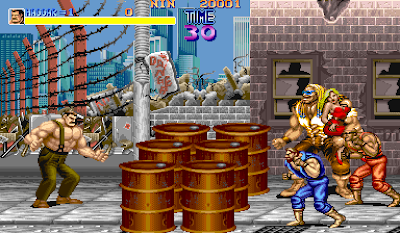 Final Fight defined a genre and gave us many memorable characters, but today I've decided to ignore the glitz and glamour of Haggar and co and focus on one of Final Fight's more overlooked elements: the hordes of generic street punks that make up the Mad Gear gang. Not everyone can be a Damnd or an Edi E., you know. Some people just don't have the same genetic abnormalities that make them eight-foot-tall hillocks of pure muscle. Some people are just normal-sized guys who have put aside their feelings of inferiority, pulled on their leather jackets and dedicated themselves to the life of a Mad Gear footsoldier. This is their tribute.

Every legend must start somewhere, and Final Fight begins with poor old Bred getting beaten to a pulp. Why is he called Bred? Perhaps the character designer, presumably Akiman in this case, had just finished a nice baguette. The more likely explanation is that it's a mistranslation of "Bret".
Bred's no match for Haggar, Cody and Guy, and the heroes of Metro City quickly dispatch him while laughing at the pathetic length of his health bar. Not to worry, Bred will be back. He can't quit, his seven street-punk children are counting on him to provide for them. At least now he can sell his story about how he was the first victim of an elected city official's rampage of vengeance. The tabloids'll eat that stuff up.

Poor Dug doesn't get it so easy. No-one wants to hear about Haggar's second victim. It's a bad case of Buzz Aldrin syndrome, and Dug wears his sunglasses hide the redness of his weeping eyes. If only you'd stood closer to the start of the stage, Dug - that fame could have been yours.

Jake doesn't give a shit about fame. He's got a sweet sleeveless jacket, and his beard is just starting to grow out how he likes it. Jake is content.

J is bad, and his lemon-yellow vest will make sure you don't forget it. Or perhaps his vest, with its crudely-drawn radiation symbol and stark negativity, is actually a charmingly ineloquent anti-nuclear sentiment. J is strongly opposed to the construction of nuclear reactors, believing instead that more effort should be made to develop sustainable energy sources.
J also deserves plaudits for wearing the single most Eighties-street-punky outfit in the history of videogaming, a magical ensemble topped off with the wildly-spiked hairdo of a serial plugsocket licker.

Some people would have you believe that Two.P is named for and based upon the second player's character in Capcom's shooter Forgotten Worlds. This may be true for his appearance, but Two.P is actually a nickname bestowed by his fellow gang members after they discovered him performing disturbing sexual activities whilst wearing a homemade chainmail bikini fashioned from two pence coins. His fellow gang members were not surprised: after all, this is a man whose public attire consists of a bright orange vest with a snake-and-dagger motif and trousers made of bin liners. He was never going to spend his evening in a cardigan, now was he?

Once again, think this is a T / D transliteration error, and El Gado should actually be called El Gato. This makes sense, because "El Gato" is Spanish for "The Cat" - a suitable name for this guy and his sharp, athletic skills. According to Google Translate, "El Gado" means pollock. A pollock is a kind of fish, often used as a substitute for cod. I don't see how that ties into El Gado's personality unless, like Two.P, it's a nickname given to him for some sexual perversion. Involving fish.

With the appearance of Axl, we're moving into the higher ranks of the Mad Gear gang. He's learned how to block, and he's proven his worth enough times to be allowed a leather jacket with honest-to-god sleeves. Sleeves! They're, like, the street-gang equivalent of the Victoria Cross. He's also named after Guns 'n' Roses frontman Axl Rose, which seems a little harsh on Final Fight's Axl - from what I can tell he's a much nicer guy than his rock star namesake.

Completing the Guns 'n' Roses tribute, here's Axl's headswapped compatriot Slash. I'm assuming he's named after the GnR guitarist, although Axl and Slash are both in the top percentile of the "Names Suitable for 80's Gang Members" chart anyway.
He doesn't really look like Slash, though. More like a steroid-infused Tom Jones, I'd say. What's new, pussycat? Why it's these rippling, chemically-obtained pectoral muscles, thanks for asking.

AKA Tweedledum, Tweedledee and Tweedledork. The Mad Gear gang foregoes medicals when recruiting members, I guess. I wonder if they ever feel insecure standing alongside bronzed Adonises like Slash, or if any body issues they may have are assuaged by ramming their heads as hard as they can into people's midriffs. No wonder they're all bald: given the amount of headbutting to the torso they do, getting their hair caught in their opponent's belts and button must be a regular and painful occurrence. Easier to shave it all off.
In G. Oriber's case, I'm led to wonder once again if there's been some mistransliteration in his name. The standard Japanese L / R mixup, combined with the similarity between the sound of B and V, could mean his real name is G. Oliver. Who is G. Oliver? I have no idea. I hope he's a fat, bald man, otherwise this is going to seem like a rather offensive tribute.

Simons is a goddamn enigma. At first glance, he's a generic punk with raised fists and a point to prove, but look a little deeper. He's wearing a gold suit. I don't care what organisation you're in, you can only get away with wearing a gold suit (and sunglasses) if you've really made your mark as someone not to be trifled with. Unless you're a stage magician, of course.
But what about his name? Given the game's use of musical monikers, if I had to guess I'd say Simons is named after eel-tongued makeup aficionado and Kiss frontman Gene Simmons.

Say hello to gaming's most famous transsexual, unless you count Birdo from Super Mario Bros. 2. Poison's confused gender status is fairly common knowledge, but here's a quick rundown: originally designed by Capcom art legend Akiman as a bona fide female, she was made into a transvestite for the American version of Final Fight because Capcom were worried that releasing a game where you could punch women would get them sued by feminist groups. This characterisation stuck, and Capcom's (or at least Street Fighter head honcho Yoshinori Ono's) official line is that in America Poison is a post-op transsexual, while in Japan "she simply tucks her business away to look female".
In an attempt to assuage people's guilt for hitting a woman, Capcom inadvertently caused a section of gamers to ask some probing questions about their own... leanings, and Poison went on to become something of a fan favourite. She's had quite the career, graduating from a standard gang member, to cameo appearances in titles such as Street Fighter III, and even reaching the heady heights of becoming a playable character in Street Fighter X Tekken. Well, technically she's been playable before, in 1999's Final Fight Revenge, but we try not to talk about that.

Oh, Roxy. Poor, poor Roxy. Poison's double went back to being a woman, and as a result no-one gives two shits about her. Apparently, she's been characterised as being jealous of Poison for looking better in women's clothes than she does. Yawn. Oh, and she's named after Roxy Music. Again, I don't care. No-one does. In any other game, a flame-haired street-fighter in hotpants and and a skimpy top with handcuffs hanging from her hip would be the object of much (disturbing and creepy) fan attention, but it's almost as if she's... missing something.

It could be worse for Roxy: she could be Sid and Billy, the forgotten men, the unloved, the pixelly representation of Nintendo's unbending censorship policies. These two barely-distinguishable punks, presumably named after Sid Vicious and Billy Idol and not two random blokes from a working men's club, are what replaced Poison and Roxy in the SNES port of Final Fight. Claiming that those women totally had man-junk tucked into their cutoff jeans didn't wash with the Big N, so in came Sid and Billy to the utter contempt of fans of the arcade version. They could have at least given them something to wear that wasn't a crop-top.

And finally, the big man himself, Hugo Andore. Well, the whole Andore family, to be precise. No musician or band was up to the task of representing this gigantic slab of body-slamming man-muscle, so they based him on pro-wrestling's most accurately-named superstar: André the Giant. Like Poison, (who became his manager,) Hugo Andore has appeared in several of Capcom's later fighting games, most notably Street Fighter III and the upcoming Street Fighter X Tekken.
Of course, Capcom had to take some liberties with André the Giant's likeness to create Andore. I don't think André ever wore neon-pink leopardprint, for a start. Then again, he was in the WWF. He also didn't have an extended family of identical siblings(?) who were only distinguishable by the colour of their clothes, which is a shame because that would have made for some very interesting Wrestlemania events.

The footsoldiers of the Mad Gear gang, then. Raise a salute to their tireless efforts to piss off a former wrestling champion, a knife-wielding delinquent and a master of ninjutsu. They're not too clever, they're not very good at fighting and some of them have gender issues more complicated than a season of 24, but they try their best, bless them.
Let's finish where we began - with the universe taking a dump on poor ol' Bred.

We'll just have to hope his insurance covers him for fire, flood and acts of Mayoral Vengeance.