Right then, time to once more dip my toe into the seemingly bottomless pool of obscure Konami arcade titles. Today's offering? The 1991 dash-em-up Escape Kids. 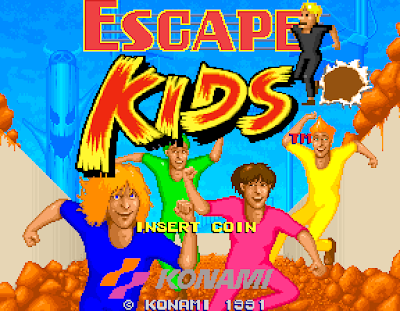 I guess that explains why so many of today's games are drab, brown affairs - Konami used up all the coloured pixels in the nineties. There's more neon here than a Bangkok red-light district, but I'm sure Escape Kids will be an altogether more wholesome prospect than the fleshpots of south-east Asia: after all, it's about the healthy fun of strenuous, gladiatorial exercise. Before I get to the actual gameplay I always like to introduce the main characters, and the stars of Escape Kids are as colourful as they come. 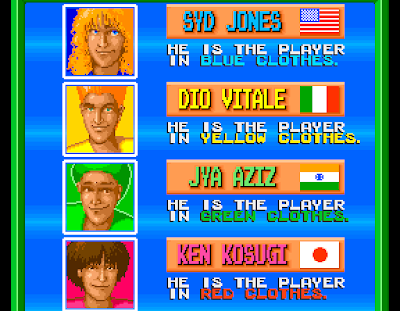 Literally colourful, I mean, not interesting or anything. Each character's bio just tells you what shade of fluorescent goop their clothes are coated in. Well, except for Ken Kosugi: his information is nothing short of an outright lie. Those clothes are pink, not red. You can say they're red all you like, son, but that won't change the fact that your outfit matches Barbie's dream car.
None of the characters are particularly exciting, and the fact that each of them is wearing an expression of concentrated smuggery so strong even Piers Morgan thinks they should dial it back a bit means I can't really like any of them. I'll be playing as Syd Jones, because he's the first on the list. Don't start thinking I like you, Syd. 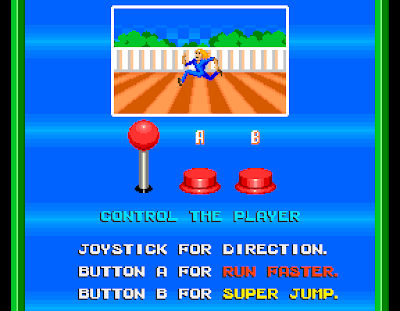 The controls are simple - as the intro says, you use "Button A for RUN FASTER", a mechanic for sports games that had previously served Konami well in the Track & Field series, and you've got a second button to jump. 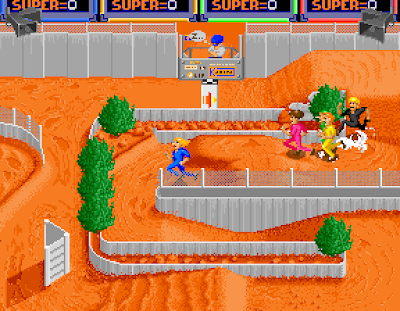 And you're off! As you can see from the screenshot, Escape Kids takes its cues from Super Sprint and other top-down racers, except with men in lycra bodysuits instead of cars. Probably the most unusual element of the gameplay is that you don't have to come first to win. 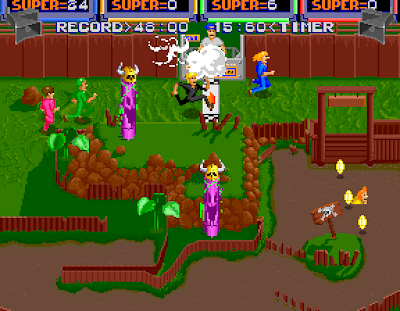 Instead, you just have to make sure you finish ahead of the mysterious black-clad champion. In the earlier races he might well finish third or fourth and you can bask in the glory of your second-place finish. Of course, as the game progresses the champion gets faster and faster, and after a short while he regards the other runners as little more than ambulatory spectators who offer no resistance in his quest for the gold. Only you can challenge him, and this gets very difficult when you realise he can run much faster than you with no real effort. Now, I don’t want to accuse Konami of racial insensitivity but really: the "black" character can run faster than everyone else? For shame. 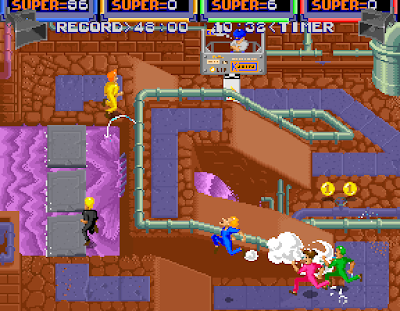 Also unusual is the credit system. You might expect to put your coin in, get a credit and race until you lose, but instead the game gives you a supply of in-game money that can be increased by adding further (real) cash. This money can be spent on upgrading your runner before each race by increasing your three statistics, the properties of which are outlined in the intro. 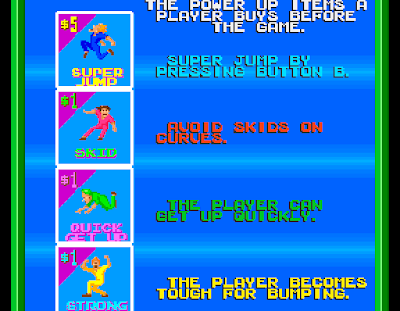 The last two sound absolutely filthy, especially "tough for bumping". The effects of these stats are fairly obvious - cornering, recovery speed and unbargeability - but you'll notice that there's no way to increase your top speed. For that, you'll need to spend your money on a fourth option: super jumps. 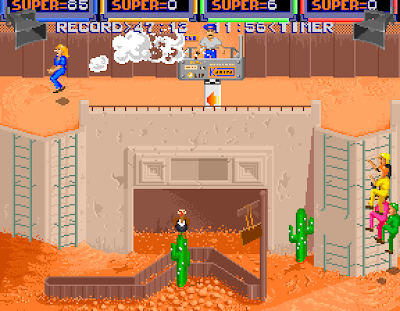 Normal running is all well and good, but the only way to succeed in Escape Kids is to slip the surly bonds of Earth and hurl your body around like a cat with a firework up its arse. The super jump certainly lives up to its name and after the first few races using it becomes mandatory because you simply cannot run fast enough to win. What this boils down to is that (even more so than most arcade games) winning becomes a matter of how much actual money you're willing to feed to the Escape Kids machine. If you're some sort of mentally-impaired billionaire, you could simply buy ninety-nine Super Jumps at the start of each race and shoot around the course like a cheetah on a hoverboard. I got to about race 35 before a combination of boredom and thumb fatigue made me stop playing, and by that point near-constant abuse of the super jump was the only way to win. 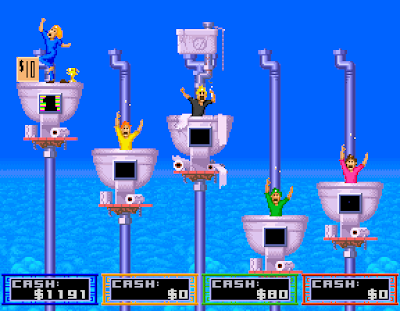 Did I mention that if you do win a race, your opponents are flushed down a gigantic toilet, presumably to their watery deaths? Because that's what happens. A scathing commentary on the tendency of modern societies to discard any athlete who isn't a "winner", or simply someone at Konami deciding it'd be really funny to watch the losers get flushed down the bog? I couldn't possibly say. If you lose, though...

... you get to see what is probably my favourite thing about the game. The champion rises high above the clouds on his porcelain chariot and washes away the snivelling dregs that formed his laughable "competition". He's even got cackling digital laughter, and it makes sense that he'd be happy. He knows he's always going to win, in the end. The other racers don't stand a chance - as far as I can tell, your reward for wining races is simply more races, a never-ending cycle of meaningless, super-jump-filled circuits that will only cease when you finally give in and let the black champion win. The roaring swirl of the toilet bowl seemed almost peaceful, in the end. 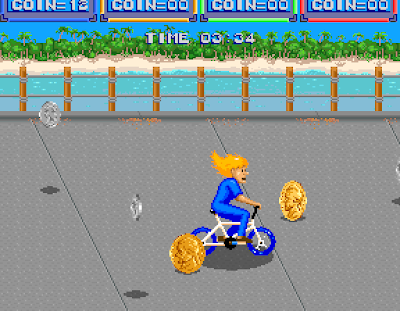 There is one brief reward for running faster than the other guys, actually. If you manage to finish first in three races, you receive the honour of being able to participate in a short bicycle-riding section. The aim is to collect coins, giving you more cash to upgrade your stats, but in reality it's simply a welcome break from hammering the RUN FASTER button. It's not quite enough time to allow all feeling to come back into your thumbs, (not after thirty goddamn races, at least,) but it's better than nothing. 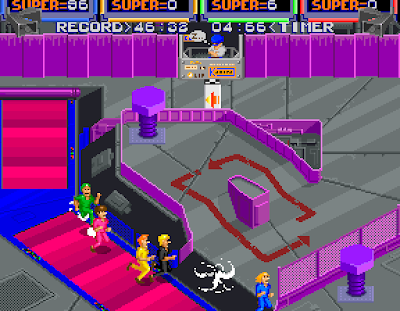 And then it's back to the racing. Always, there is more racing. In fact, I must take issue with the title of this game. Two points: they aren't Kids - or at least I hope they aren't otherwise this game is even more barbaric than I first though - and they sure as hell don't Escape from anywhere. 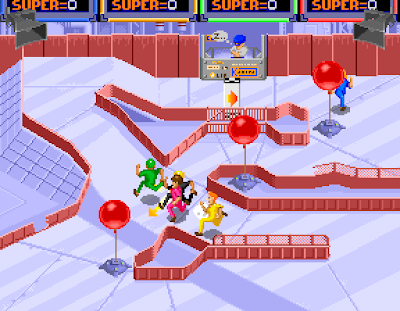 Yet more racing, running ever onward toward an unattainable goal, your life a pointless maelstrom of muddied legs and blistered feet.
Okay, okay, so I'm exaggerating. Escape Kids really isn't a bad little game: the gameplay itself is quite good fun, (if only for a short while,) and it'd probably be even more enjoyable with two or more players. The graphics are nice and bright, with Konami's ultra-saturated cartoon look very much in evidence. There's that evil toilet-flushing scene. As for the music, it's hard to say - nothing in the game takes longer than thirty seconds to do, so by the time a music track is starting to get interesting it's been replaced by the next one. 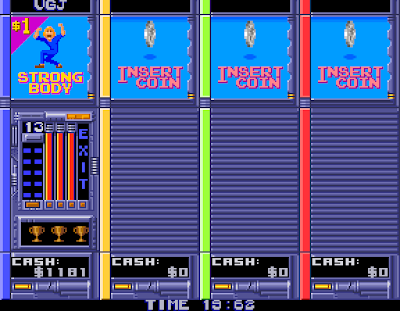 Escape Kids' major failing is that there's no real meat to it. Races are short, repetitive and there's little room for tactics. The amount of enjoyment you get out of if will depend in large part on how much you can resist filling your in-game bank account with cash and spending it all in the in-game equivalent of steroids. 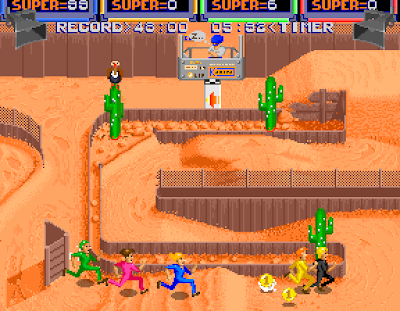 There might be an ending to Escape Kids, but someone with more patience and fitter thumbs than I will have to be the one to discover it. Escape Kids is another entry in the vast list of obscure Konami arcade titles that did the world a favour by staying obscure: much like Fast Lane it isn't a terrible game by any means, but merely a fleeting distraction along the path to greater glories.