King of Iron Fist: a phrase that stands for fierce battles between mighty warriors, battles fought for honour, revenge, greed, power... No, no it doesn't. For me, it stands for the many goofy haircuts of one family, one family that stands head and follicles above the rest: the Mishima family.
As I'm sure you're aware, the Mishima family are the main characters of the Tekken franchise, so it stands to reason they should have the most bizarre hair, right? Yeah, nothing says "head of a huge criminal conglomerate" like a hairstyle more usually associated with children's entertainers with names like "Shleppo" and "Kaptain Krazypants". Speaking of the leaders, let's start with Heihachi Mishima. 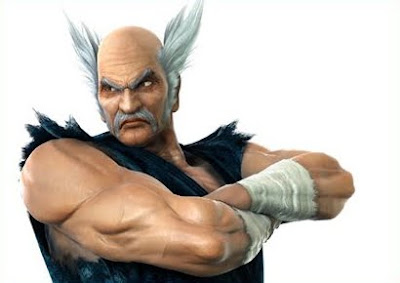 The head of the Mishima Zaibatsu, organiser of the original Tekken tournament and a man who throws his five-year-old son off a cliff because the kid isn't growing up quite as tough as he'd like. He's a man who demands respect, especially in the fields of martial arts tournaments and childcare. Obviously the best way to command that respect is to style your hair like the outstretched wings of an attacking bird of prey. It certainly draws attention away from the lack of hair on the rest of your head. Male pattern baldness? More like awesome pattern baldness.
I'm sure that this hairstyle also enhances Heihachi's combat skills: it acts like a pair of fins, making him more stable in flight and such. It also has the advantage of making him look a lot taller than he actually is, so if he ever has to fight against a cat, he's sorted.
Finally, he has a pretty bitchin' moustache, but it is completely overshadowed by his hair. Complete Moustache Eclipse is the sign of a 'do that should not be messed with. Do not attempt to give yourself this hairstyle if you are not a black belt in karate or an equivalent martial art, as severe neck and head damage may ensue.

Heihachi's son next, and he's gone in a different direction when it comes to grooming. 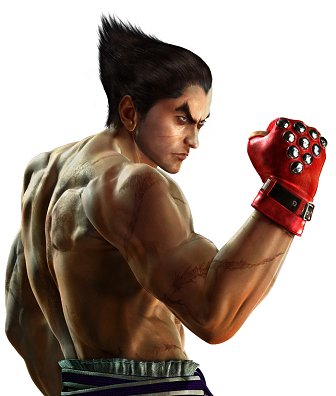 This is Kazuya Mishima, Heihachi's son who was chucked off a cliff. Luckily for Kazuya, the Devil was waiting at the bottom and saved his life and gave him, y'know, Devil powers, like the ability to spam cheap laser-eye-beam attacks. When he's not in his Devil form, he styles his hair to look like one of those helmets worn by high-speed cycle racers. It's a smooth, sleek, high-maintenance hairdo, requiring seven jars of extra-hold gel and regular access to a wind tunnel.
For some reason, Kazuya always reminds me of the "Sad Onion" symbol you get get on dangerously shoddy Chinese toys:

Kazuya can't have been that sad an onion though, because he managed to have a son to carry on the fine tradition of Mishima hairdos. 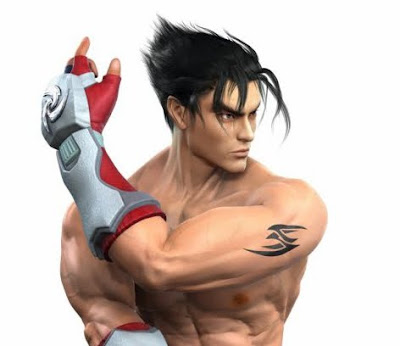 This is Jin Kazama, Kazuya's son. You would think that when your father is possesed by Satan, you would come out looking a little more interesting than "shirtless karate man". He's the weak link in the Mishima hairstyle chain, sporting the same 'do as his dad, but with a bunch of floppy fringe bits attached. Don't write it off just yet, though. Take a closer look at the hair when isolated from Jin's head: 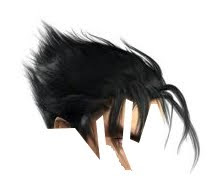 It's in the shape of a cuttlefish! 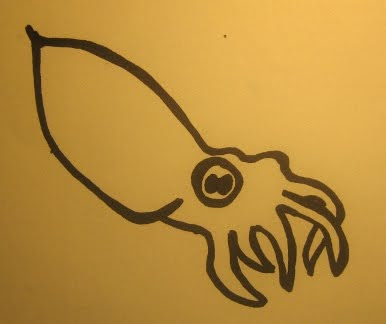 Your secret is revealed, Jin. Your hair is a cephalopod. No good can come of this. Unless, of course, the next Tekken game is set in the underwater kingdom of Atlantis. Then it'll come in handy.

There is one final member of the Mishima clan: Heihachi's father, Jinpachi. He was introduced in Tekken 5, once the technology required to capture the true splendour of his hair had been developed. 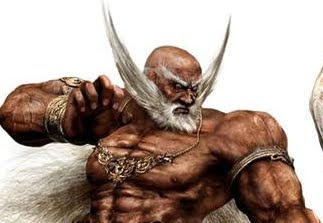 Jinpachi knows that the true power of a man cannot be captured by the hair on his head, but only by the beard. Just look at Brian Blessed, he knows where it's at. What a beard it is too, like a man who has been startled while trying to eat an eagle whole. That's his beard in Fighting Mode, by the way: he can turn it upside-down when he wants to look like a wise old man. If you have a beard, you're now looking down at it and feeling a crushing sense of disappointment because it isn't Jinpachi's beard. I know I am.

So there you have it, a family of fist-fightin' freaks with hairstyle that touch both the skies and our hearts. When I look at them, though, I can't help but wonder... could there be more? What if these styles could be combined, like some glorious keratin-based Voltron? Well, I think it'd look a bit like this: 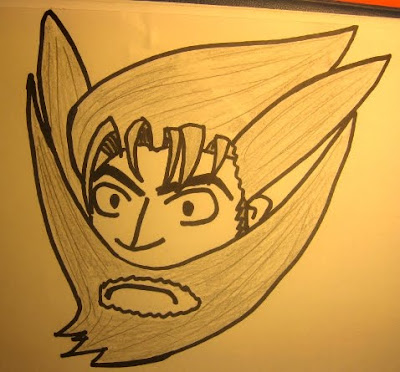 I'm sure you'll all agree that this is the greatest hairstyle in the history of Mankind. If I don't see thousands of people sporting this look in the next few weeks, I will be sorely disappointed.

P.S. If you think you can draw a better representation of the complete "Combined Mishima" hairstyle, then please email it to vgjunk@hotmail.co.uk!
Posted by VGJUNK