Licensed games, eh? Sure, there are a few that buck the trend and aren't soul-curdlingly terrible, but on the whole they're a way to slap a recognisable face on any old dreck and hope that seeing, say, Superman's chiselled mug beaming out of an advert or some boxart will get gullible saps to part with their hard-earned. Hooray for capitalism and clueless grandparents buying games for their spawn. The NES has its fair share of awful licensed titles (I'm looking at you, Conan), but I'm going to redress the balance with some fake title screens from licensed NES that don't exist. You'll wish they existed, though, oh yes. You'll wish so hard your eyes turn into tomatoes and fall from their sockets, splattering on the floor in a chunky red paste. First game please! 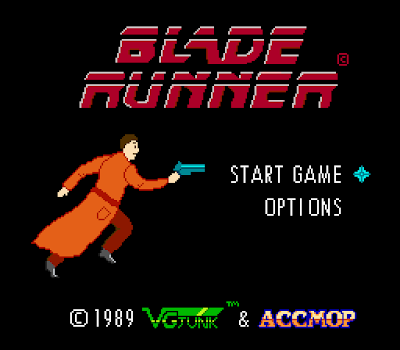 What would a Blade Runner game for the NES be like? Well, it wouldn't be like the PC game, and by that I mean it would be neither a detailed, 3D point-and-click adventure, and nor would it be good. It would have almost certainly been a side-scrolling platformy shootery thing, like Megaman, but again; not good. There would probably have been a terrible on-rails section where you piloted a Spinner, with one hit kills and everything. Also, there's something about the combination of those particular orange and brown colours on Deckard's coat that just screams "NES graphics", don't you think? 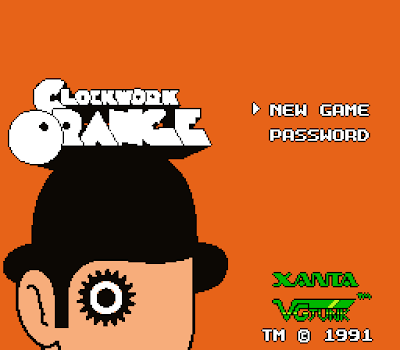 (Click for bigger)
Surely this would have been a River City Ransom-style scrolling beat-em-up, complete with chiptune version of "Singing' in the Rain" that plays as you kick a tramp to death. Also included would be a button-mashing minigame where you have to hammer the buttons like the mighty Thor himself to help Alex resist the Ludovico Technique. Or course, you cannot resist the Technique, and you're left with an inability to listen to the music of Beethoven as well as irreparably damaged thumbs. 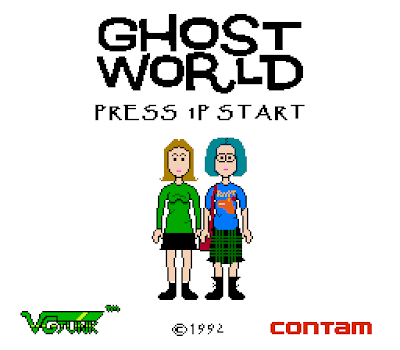 (Click for bigger)
A Zelda-style RPG where you much travel the city collecting vicious put-downs and cynical quips. Call Steve Buscemi a Klansman! Wait for a bus! As a sub-weapon, you get to hurl rare blues vinyl at people. Comes with a warning label due to strong language and the fact that Steve Buscemi's digitised face is terribly, terribly disturbing. 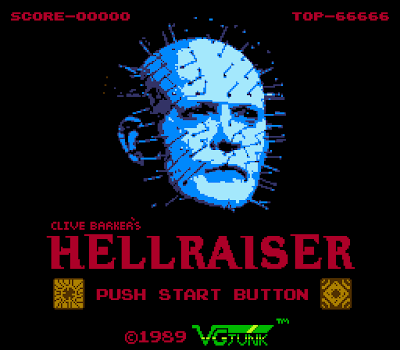 (Click for bigger)
Did you know that there almost was a Hellraiser game for the NES? Color Dreams, a company infamous for making NES games with license from Nintendo, were working on a Hellraiser game that was apparently so advanced it required a special "Super Cartridge" to work. Sadly, the whole endeavour was just too expensive and the game was cancelled. You can read a bit more about it here, if you like.
This version would have been better though. Imagine Metal Gear, but instead of avoiding soldiers you're trying to sneak past a group of sadomasochistic demons who want to drag you back to hell with them so they can do horrible things to you involving chains and hooks and possibly the music of Peter Andre. Sounds fun, huh? Well, I've played Haunting Ground, and that wasn't fun, but then again it didn't have Pinhead in it. More's the pity. 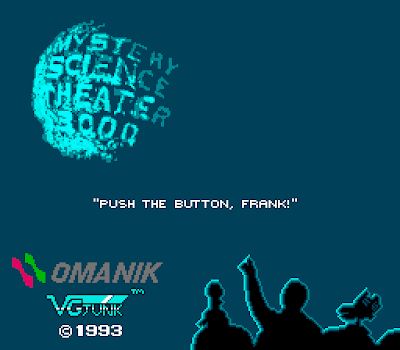 (Click for bigger)
All I can imagine is that an MST3K videogame for the NES would play like a primitive version of Guitar Hero, but instead of pressing a button to play a musical note you have to press it to make jokes at the expense of a cut-scene that is playing in the background. The films start off gentle, perhaps with something like Jack Frost, but they get more and more painful to watch until the final confrontation with Manos: The Hands of Fate.
P.S. This one is my favourite. 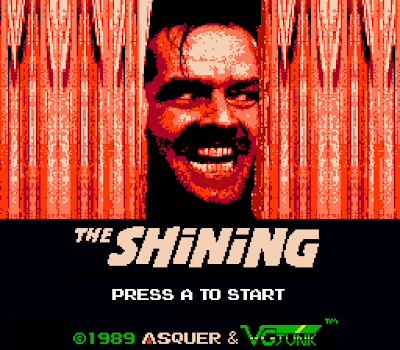 (Click for bigger)
Stanley Kubrick's masterpiece of isolation, madness and creepy guys in bear suits as a videogame? Why the hell not! There are two ways you could go with this one: either play as Wendy and hide around the hotel, trying to avoid Jack and his axe. Or, play as Jack and attempt to brutally murder your wife and child. Hmm, that one might not have got past the censors.
I'd like to imagine it'd have cutscenes like the ones in Ninja Gaiden (the NES version, not the new ones) of the opening scenes, with a little pixellated car driving along some winding mountain roads. That'd be great.

And that's your lot. I hope you enjoyed this little glimpse into a parallel world that could have been. I hope you're not too disappointed that these games don't exist: if you are, I'd like to remind you that they would have been licensed NES games, and therefore would have been shit.
Posted by VGJUNK