FIGHTERS OF THE WORLD: FRANCE

Bonjour, mes amis, and welcome to another installment of Fighters of the World! Last time it was the fighters of Russia that were under the spotlight, but today we'll be moving westward, to that great nation of culture, romance and incredibly foppish men and women with swords: France!
Lets face it, the French are not known for their fighting ability. In fact, you could say that they are known for being a bunch of cowards who run away with their baguettes between their legs at the first sign of any physical violence. This probably explains the relative scarcity of beat-em-up characters who hail from France, but there are a few out there. Unlike the Russians, who have a whole raft of stereotypical attributes that can be turned into a fighting game character, the French only really have their cowardice and their love for food and wine, neither of which are really enough to base a brawler around. So, Japanese developers ignored that and did the next best thing: they invented some new stereotypes! What are they? Well, let's find out.

King is a woman who pretends to be a man. She mostly accomplishes this subterfuge by kicking seven shades of shit out of any man who challenges her, which is a fairly decent strategy. I've always liked King as a KoF character, partially for her fighting style, but mostly for her taunt, in which she says "Cam awn, baybee!" in English that is beyond broken and into "irreparably mangled" territory.

While King is certainly one of the less stereotypically French characters in this list, she does have certain traits that will keep cropping up later. First of all, she's blonde. Pretty much every French fighter is blonde, which is odd, because all the the French people I have ever met have been dark-haired. That's probably down to Japanese game developers usual stance that everyone outside Asia has blonde hair. Also, roses. She has a special move called "Surprise Rose":

Roses are going to become a theme here, trust me. Any hayfever sufferers many want to leave now.
So, that's King. French, but not, y'know, super French, like an anthropomorphic Eiffel Tower smoking Gitanes while drinking red wine and sneering at the English. She is, at least, a wine connoisseur.

Appearing in ADK's World Heroes, Janne is based on on Joan of Arc, pretty much the only French person to ever be famous for fighting (unless you count Napoleon, but he just suffered from Short Man Syndrome). Sadly, due to ADK's blatant disregard for historical accuracy, she doesn't hear voices in her head, doesn't lead the French in the Hundred Years War and doesn't get burned at the stake. Instead, she fights with a sword that can turn into a whip and worries about not finding a husband because men find her strength off-putting. Lucky for her, really.

Janne introduces another trait that the French often have in videogames: swords. While she doesn't carry the usual French rapier, she is a swordswoman, and in a shocking twist on the usual designs for female warriors, she wears armour that might even be useful in combat. Shock! Not a chainmail thong or tiger-fur bikini in sight. Kudos to ADK for that, at least. 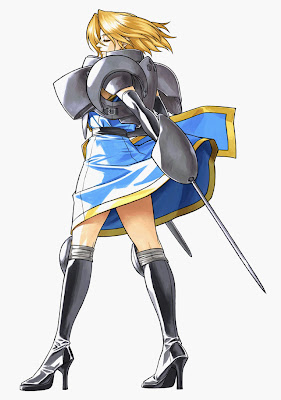 Yes, another blonde lady with a sword. Granted, she appears in the Samurai Shodown series where everyone has a sword, but at least they gave her a rapier (by the way, Raphael from the Soul Calibur series is also French and uses a rapier). In many ways, Charlotte is a more serious version of Janne, to the point where I wonder if SNK were influenced in her design after seeing Janne. Indeed, SNK worked closely with ADK during the Neo-Geo's lifespan, and after ADK went bust they bought all ADK's intellectual properties. It's a close call, but I think Janne came first. The main difference between them is that Charlotte appears to be wearing Janne's armour after it was given a heavy course of steroids. Those shoulder pads are bigger than her head! 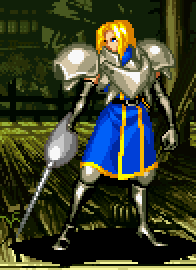 Charlotte is suposedly based on the main character of the massively popular manga/anime series The Rose of Versailles, and it's my personal theory that this is where many of the French stereotypes found in videogames of the nineties originate. Long blonde hair, rapiers, roses, it's all there. 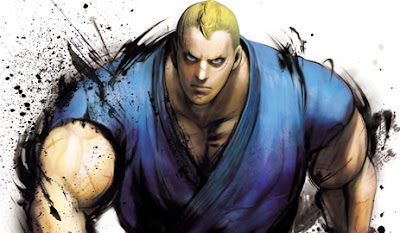 But what of the French men? Probably the most famous French fighter at the moment is Street Fighter IV's Abel, an amnesiac who fights using combat Sambo. As he's more modern than the rest, he's a little less stereotypical, but he still has blonde hair and he's still more of a gymnastic-type character than, say, an out-and-out brawler. Sadly, he has no roses or bladed weapons: that role in Street Fighter is already taken by Vega.
My main problem with Abel is not that he's too stereotypical, it's just that when I look at him, all I can see is lesbian psychopath and skydiving-based murder enthusiast Lydia from the British soap opera Hollyoaks:

Okay, now we're really getting into it. Jean is a gymnast who, after receiving a score that wasn't perfect, left behind the deeply macho world of gymnastics and became a street fighter in order to improve himself. As you do. I think this should become standard practise during the Olympics: any gymnast who doesn't score a perfect 10.0 must spend the next four years participating in illegal underground cage fights. 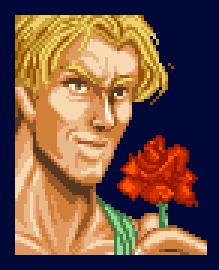 As you can see, Jean is blonde, and he has a rose. Also, I reckon that's what Leonardo DiCaprio would look like if they ever made an anime version of Baz Luhrmann's Romeo + Juliet. I've no idea why the French have been saddled with the "gymnastic-type" tag, although I assume it's due to them supposedly being elegant and graceful. However, if you've watched French football, you know that this isn't true. 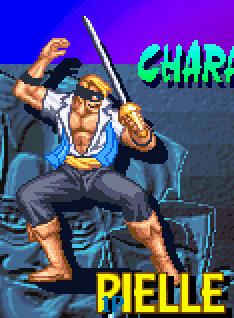 You didn't think we'd get through this article without running across a fighter called Pierre, did you? I know it says "Pielle", but that's obviously just your standard Japanese L / R confusion. Pielle appears in the little known yet actually really good arcade fighter Breakers, made by a company called Visco in 1996. Pielle is definitely my favourite on this list, because a) he is by far and away the most French and b) he looks a little like Cary Elwes in The Princess Bride.
How French is he? Incredibly so. He has an obsession with roses, even using them in his attacks. He fights like a fencer, using a rapier / épée thing. He's blonde. And best of all, whenever he does anything in the game, he makes a noise in an incredibly fey French-accented voice, thus making him one of the most irritating fighters you will ever battle against. He's right up there with Storm in Marvel vs Capcom 2 and her constant "HOOO HOOO HOOO HOOO" sound effects. Check this video out to see what I mean. Skip to about 2:30 in to see it all kick off.

I particularly love his not-at-all camp exclamation of "Zandaa... Risaa..." when he does his super. He truly is a macho man who you should not be messing with. Also note his move where he pirouettes across the screen whilst covered with roses. You don't get that with Ryu and Ken, I tell you what. 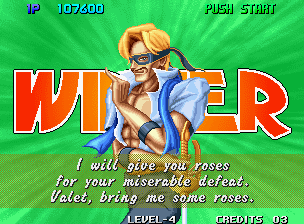 What a handsome son of a gun.

Well, that's the fruity world of French beat-em-up characters revealed. If you're thinking of designing a French fighter and you can't be bothered to read this whole article, here's a quick checklist for you:
A) BLONDE
B) ROSES
C) SWORD (RAPIER?)
D) MORE ROSES
Just follow that and you won't go far wrong. See you next time!

Previously: Fighters of the World: Russia
Posted by VGJUNK