Do you remember the last time you did a jigsaw? Dull, wasn't it? Of course it was. There are always pieces missing, and even if there aren't, when you finish all you're left with is something that might have been a nice picture until someone ruined it by someone drawing wavy lines all over it, like a crayon-wielding toddler set loose in the Louvre. A terrible scenario I'm sure you'll all agree, but luckily these problems have been eliminated by Atlus in their 1994 SNES jigsaw simulator Pieces. 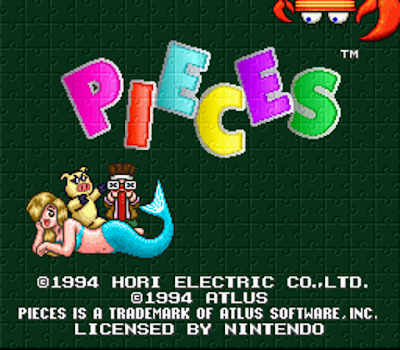 Yes, although they may be better known nowadays for their RPG grindathons, Atlus released a jigsaw game for the SNES. Of course, it is not as simple as placing bits of printed cardboard in an interlocking pattern so that they form a picture, oh no. There are... complications. Dark, sinister complications. The main meat of the game comes via the competetive mode, in which Atlus have taken the gentle pastime of... what do you call the pastime of doing jigsaws? Jigsawing? Make-picture-clip-together-puzzling? Soul-Diminishing? Whatever it's called, Atlus have taken it and transformed it into a pulse-pounding battle of wits. 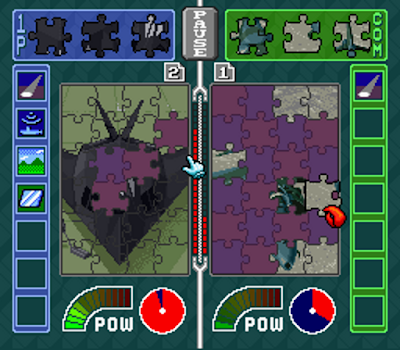 As you can see from the picture above, there are two puzzles on the screen, yours being the one on the left. Each stage consists of three puzzles: solve all three before your opponent solves all three and you win. It sounds simple, but you also have the added complication of power-ups. Yes, power-ups. Everytime you put a piece in the correct spot, a power gauge fills a little, giving you access to a bunch of super-powers that the jigsaw experts still toiling in the "real world" would kill for. They can be split into two basic categories: ones that help you, such as guiding your cursor into place via a kind of "getting warmer, warmer, hot!" method or simply doing the jigsaw for you, which might sound like it defeats the point but is pretty much mandatory to pass the later stages. Then there are the other type: the evil power-ups that are designed to fuck over your opponent. You can reverse their controls, slow down their cursor and even employ a tiny sentient hand-broom to sweep away the pieces they've already placed. Pure evil, you see. I would like to see these effects brought into a real-world jigsaw scenario. Obviously, they would require some modification, but I'm sure it could be done. A simple sweep of the hand across their jigsaw would be a decent stand-in for the broom power, and injecting a high-grade hallucinogen may well replicate the reverse-controls effect, with the possible added bonus of your opponent jumping out of the window to commune with Ra the Sun God. An instant victory; just don't try it on your grandmother.

So, you can see that this is a recipe for a truly brutal version of computerised jigsawing. This is the main reason I decided to talk about Pieces here; I believe (and bear with me on this) that Pieces is a terrible indictment of human nature. Only the human race would take something as peaceful and non-threatening as doing a jigsaw and turn it into an all-out war, a stinking black morass of treacherous, back-stabbing, all-or-nothing competition where victory can only be secured by kicking your enemy in the (metaphorical) bollocks. Atlus has truly exposed the black soul of humanity, and I hope you're all ashamed of yourselves.
But who are these mysterious gladiators of the printed cardboard with whom you must do battle? Well, they are a bunch of freaks. Cool freaks, and here are some of my favourites. 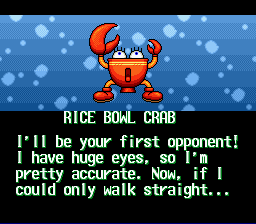 Rice Bowl Crab is a crab with the body of a rice bowl and little shoes he appears to have stolen from Super Mario. He's not kidding about having huge eyes, but sadly for him they only point upwards. It's no surprise that he's the first and easiest opponent. 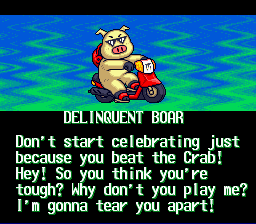 Look at this goddamn badass. Delinquent Boar is a tough-guy of the highest order, or at least he would be if he didn't spend his time doing jigsaws. His name makes him sound like he should be a boss in Megaman X, and indeed there is a motorcycle-riding pig boss in Megaman X7. I guess pigs and bikes go together because they're both hogs, unless there are wild gangs on Harley-riding pigs terrorising the highways of Japan. Hell, I'm going to believe that even if it isn't true. 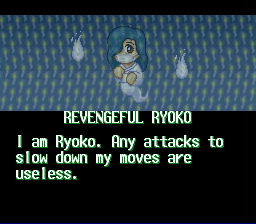 Revengeful Ryoko is a ghost, and I think as far as anything can be known about something that doesn't exist, ghosts are known for being lost spirits who cannot ascend to heaven due to them having unfinished business here on the mortal plain. Which I guess means that Ryoko died before she could finish her jigsaw, and that's her (literally) unfinished business. This surely disproves the existence of ghosts, because judging by the average age of most jigsaw-puzzlers (somewhere in the low hundreds, I reckon,) they must be dropping dead over their puzzles all the goddamn time, which means there should be ghosts every-bloody-where. Which there aren't. So far Pieces has shone a light into the darkest recesses of man's collective psyche and disproved the existence of an afterlife. Way to go, Atlus. 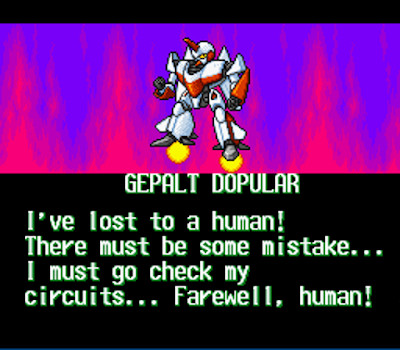 Your penultimate opponent is a Valkyrie fighter from Macross, and no attempt has been made to disguise this fact. He's a plane who transforms into a robot, and his name is Gepalt Dopular. Now, it may seem like he was named by an Atlus employee falling asleep on he keyboard, but I think the "Gepalt" section of his name is meant to evoke the famous GERWALK mode of the Valkyrie fighter. But when you get down to basics, he's a transforming robot, and therefore he is cool. 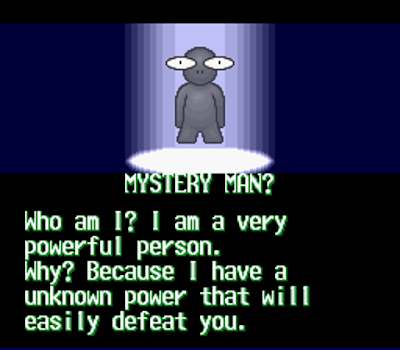 Finally there is the Mystery Man? Mystery Man? is such an enigma, he even has a question mark after his name. Just to let you know, he doesn't have an unknown power that will easily defeat you. He's all talk. Well, he's all eyes, mostly. He should team up with Rice Bowl Crab. Once Mystery Man? is deafeated, you get a little credits sequence of all your opponents zooming away in a flying saucer, which is nice for them, I guess. It was not apparent in his introduction, but is seems that Rice Bowl Crab is HUGE AND WILL EAT YOU. There's no room in that saucer for food, and my guess is that Delinquent Boar will start looking mighty delicious mighty quickly. 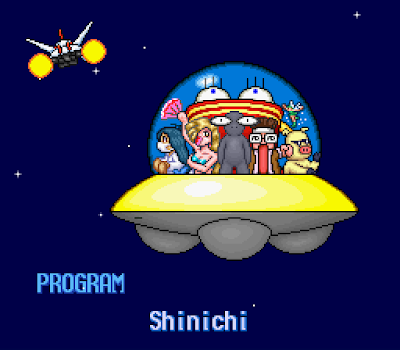 A couple of other things; first of all, the actual pictures used in the puzzles are a strange bunch. There are plenty of cutesy ones, like pandas and a couple getting married, there are a few stranger ones, like the crocodiles dressed in military uniforms, and then there are the really odd ones like this almost Fist Of The North Star-esque rollerball player: 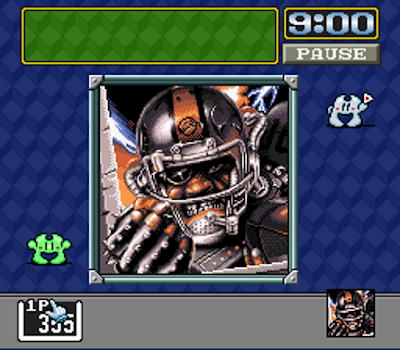 Weird. I may have talked up the competetive mode, but there is also a more sedate non-battle mode for all you delicate flowers out there, which can been seen in the above picture of the rollerball guy.
So, is Pieces any good? Surprisingly, it is actually quite good fun. It's certainly addictive, it's got some good characters and if you fancy a quick blast of puzzling fun, it's not a bad option. It's not perfect - it's never going to win any longevity competitions, and it won't take long for you to have seen all the puzzles, but the game's main problem is that, between your cursor obscuring your view, the black outline of the pieces and the SNES' low resolution, it can be pretty difficult to see if the pieces match up properly, which occasionaly make it feel as though you're trying to complete a jigsaw puzzle featuring a picture of TV static. It does, however, feature Delinquent Boar, and for that reason alone it gets a thumbs-up from me.
Posted by VGJUNK