It's Hallowe'en season, and what could be more Hallowe'enirific than Silent Hill? Nothin', that's what. So without further ado, here are my five favourite non-boss (so that means he won't be here...) enemies from the Silent Hill series. Well, I say favourite: perhaps it would be more accurate to say "The ones that terrified me the most". And before you ask, YES THEY DO LOOK MONSTERS TO ME, VINCENT.

Twin Victims / Double Heads, Silent Hill 4
You may notice that there are no enemies on this list from games released after SH4. That is because all the SH games released after SH4 are, to be frank, rubbish. Silent Hill 4 isn't great either, but it has some redeeming features: the first-person sections in your apartment turned out to be the best bits, and they genuinely made me not want to go and save the game. The title screen music is great. Then there are these conjoined freaks. 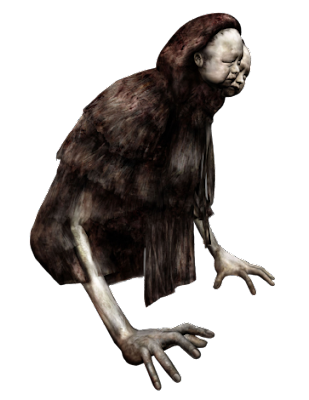 Overall, I wasn't impressed with the enemies in SH4; rather than being scary, the unkillable ghosts were merely irritating, and the less said about the burping nurses the better. The Twin Victims, however, are great. They are creepy because they have the faces of babies, and babies are creepy, especially when two of them have been smooshed together and made eight feet tall. The creepiest thing about them, however, is that they will not attack straight away but just point at you and whisper in their creepy baby voices. No sir, I do not like it. 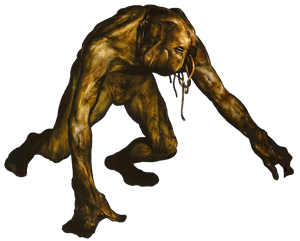 In terms of their basic physical structure, Rompers aren't really all that terrifying. Sure, they have the whole face-like-a-worm-orgy thing going for them, but other than that they are one of Silent Hill's more generic-looking hell-beasts. But their appearance doesn't matter all that much, because you don't normally see them before they barrel out of the shadows at you, making that hideous grunting/laughing noise that they do. They're SH's masters of the sneak attack. I don't think I've ever actually killed one, because as soon as I hear their infernal gibbering I run away run away run away RUN AWAY! 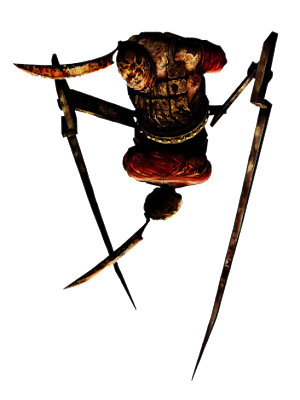 Konami really managed to out-Clive Barker Clive Barker himself with the Pendulum. Like the Romper, the main weapon in its terror-inducing arsenal is the sound it makes: a soul-shredding grating sound like two rusty cheesegraters having sex on a blackboard. Maybe it's just me, but I have a hard time fighting them because the noise is so horrific I can't concentrate on what the bloody hell is happening. So, like the Rompers, I try to avoid them whereever possibly, only to run into them in narrow corridors or on raised walkways. Bugger. This is where their other qualities begin to shine, as you realise that they are pretty much made of knives and they are flying toward you at full speed, swinging their blades around. My advice? Don't skimp on rounds and use the shotgun, possibly on yourself when the terror gets too much for you. 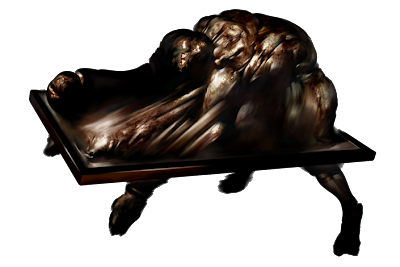 SH2 dealt with some pretty tough themes, and there are none bigger than child abuse. So, congratulations must go to Konami for a) using it in the plot without it seeming cheap or exploitative and b) designing a monster that, while remaining confusing and, well, abstract, perfectly conveys the notion of child abuse. You really do feel for Angela, knowing what that thing is and what it probably wants to do to her. Yet another reason why SH2 is the best game ever made. 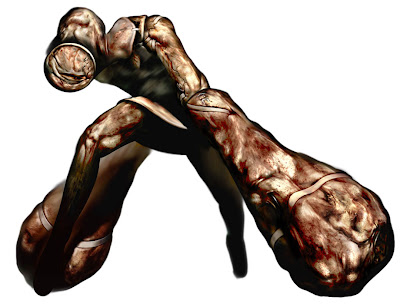 My very favourite. This ham-armed, penis-faced, spindly-legged demon should not be scary; he should be downright laughable. Ha ha, you might say, look at that freak. But then it turns to look at you with its eyeless face and you are scared. They're called Closers because they close off space with their huge bodies, and I think that's part of the reason I hate / love them so. There's no getting away from them; they just kind of bumble toward you in an almost uninterested fashion, their "faces" twitching... brrr. Plus they're the first enemy you encounter, so they have a special place in my heart. A black, twisted place.

So, those are my favourites. Pyramid Head wasn't on there because I consider him a boss, not because I don't think he's cool. Because I do. Come back soon for more Hallowe'en-related videogame nonsense!

BONUS!
If you have any interest in Silent Hill, then you should read the translated Lost Memories book here, because it's jam-packed with interesting Silent Hill info.
The Silent Hill Wiki is a good place for information, too.
Posted by VGJUNK