Have you ever wondered what a possesed bag of cement would look like like? If you answered yes, then you are a weirdo. If you still wish to know the answer, and some other things a weirdo like you would probably want to know , then join me as I highlight some of the more peculiar moments in Natsume's 1993 action platformer for the SNES, Ghost Sweeper Mikami: Joreishi wa Nice Body. 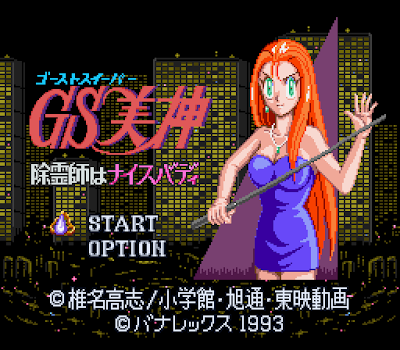 GSM is a fairly standard side-scrolling platformer, based on the anime of the same name which concerns a young woman called Mikami (whom you play as) who, I guess, sweeps ghosts? I don't know, it's all in Japanese. I think the plot is something to do with collecting magic stones to put in a statue, but alls I knows is Mikami runs around a lot in a minidress whacking things. Yes, it's a game that's full of demons, ghosts and other assorted bugaboos, all of which require a good firm sweeping. That alone gets it a place on the VGJUNK Hallowe'en list, but it was something creepy in another way that piqued my interest: 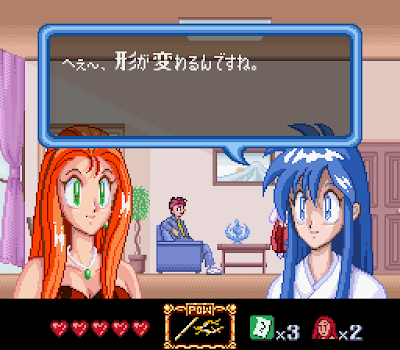 Dear god, those eyes! They look like they've just sat on something unusual and they're not sure whether they like the sensation. I assume that's what the eyes look like in the original manga/anime, unless perhaps the developers had a lot of spare pixels and decided to cram them all into the eye region. So, our hero sets out to sweep as many ghosts as possible, which may prove to be a daunting task because she appears to be armed with a rolled-up newspaper. How do you feel about facing this collosal battle against a horde of nightmarish foes? 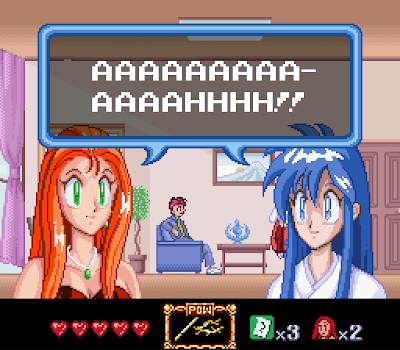 I thought as much. 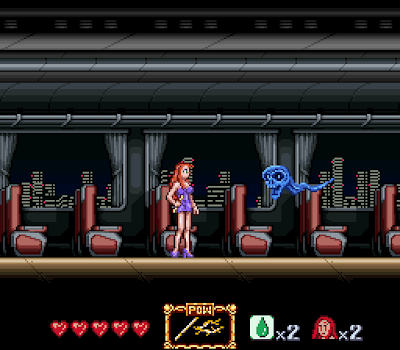 So, you start on the streets and make your way to a train. It's an odd mix of cute and creepy; little pink puffballs like Kirby's baby brother, followed by dripping sludge demons. Fortunately, your rolled-up copy of The Sun is more powerful than it looks, and soon you've upgraded it to shoot lightning. GSM is off to a pretty good start, thanks to some solid music and interesting enemies, including the skull-tadpole above and this sinister little pervert:

I could make a joke about groping on the subways in Japan, but I wouldn't denigrate another culture like that. All the enemies so far have been unaccountably happy, with big, friendly grins, and the boss is no exception: 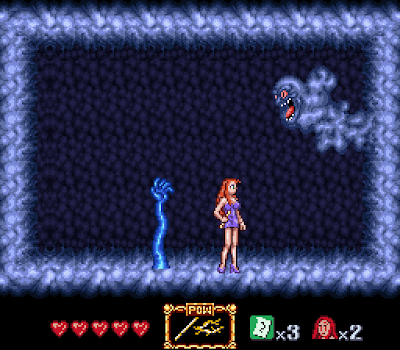 The lingering spirit of a thousand noxious farts, trapped in a subway car? Quite possibly.

Stage two is a fairly generic climb up a waterfall-covered mountain, and it is only redeemed by the stage's boss: a cute little dolly that turns into this: 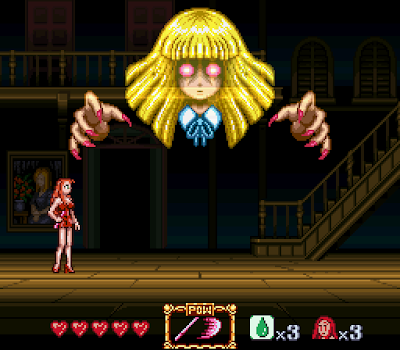 She's pretty cool, and I see she went for the "Satan's Razors" manicure set. Delightful. I don't know how complicated it is to come up with a magic spell that manifests your head, hands and none of your clothes except your collar, but I'm sure it's not easy and for that Dolly must be congratulated.

Stage three, and the madness really kicks in when Mikami is shrunk and spends the level on the back of a cat. A deeply, deeply disturbed cat: 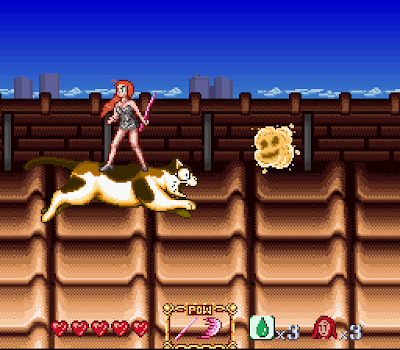 Look at his eyes, dude. That cat has seen things, man. Terrible things. All the catnip in the world can't erase those memories. The stage is an auto-scrolling affair, where you have to jump and duck under obstacles whilst sweeping ghosts, much like the sewer surfin' sections of the Teenage Mutant Ninja Turtles arcade game. Amongst the enemies to avoid are what appear to be happy little clouds of flatulence.

Hey, you look pretty familiar, Mr. Fart. Now where have I seen you before... 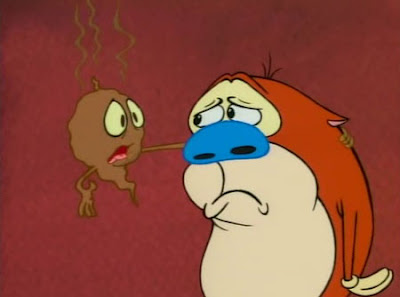 Why, it's little Stinky from Ren and Stimpy! Once you've defeated a bunch of little Stinkys as well as the flea-like end-of-stage boss, it's on to stage four, which is set in some kind of garden. I hope you are ready to genuflect before your new ruler, because here he comes. 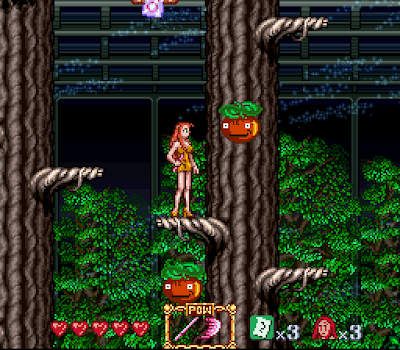 ALL HAIL TOMATOR, RED GOD OF THE SHINING DAWN!
Also featuring in this level, a woman, sitting in a chair. She's just reading and minding her own business. If you try to attack her, like the violent psychopath you no doubt are due to playing videogames, a big blobby thing appears and zaps you. 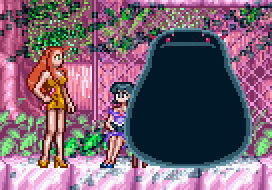 Serves you right. Also trying to kill you are these skull butterflies:

Which bear a strong resemblance to the Bitterfly enemies from Castlevania: Symphony of the Night.

Is this common Japanese monster type? Leave a comment and let me know if they are.
The next stage is another scrolling one, this time much more in the vein of your typical side-scrolling shooter (anime witch division) like, say, Cotton. 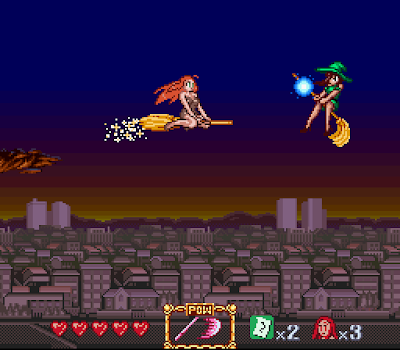 It's broomsticks a-go-go, with the cat left at home to try and rebuilt his shattered mind. As you can see, there are anime witches to fight, anime witches being a subset of practicioners of the dark arts whose power is directly proportional to the shortness of their skirts. There are also little dragony things and kamikaze swallows. The boss is a vampire with a rather splendid cape, who took his attack pattern directly from the Tasmanian Devil. 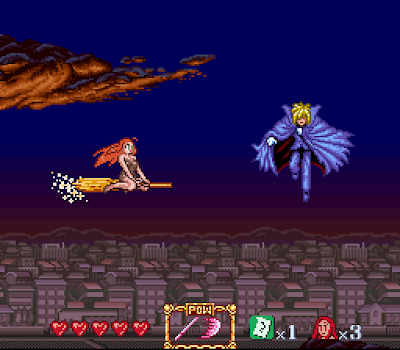 Despite his floppy blonde hair and no-doubt androgynous good looks (he is an anime vampire, after all,) he's still more manly than Edward Cullen. Man, I sure do feel proud that I had to look up his name.
Now, the question you've all been waiting to have answered will reveal its secrets to you! Just what does a posessed bag of cement look like? 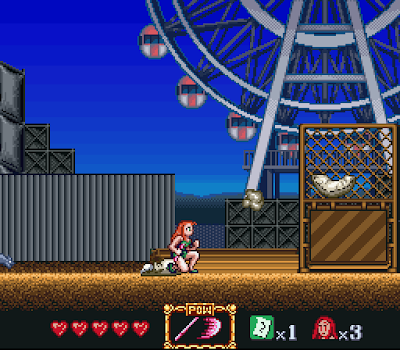 It looks like a bag of cement that can jump through the air. If you expected anything more, then you are a fool. A damned fool. Perhaps the cement bags can team up with the bag of fertilizer from the Punisher game and start a crime-fighting duo. They'd be rubbish at it, though, rubbish like a team comprised only of Aquaman. The boss of the stage is far more interesting. 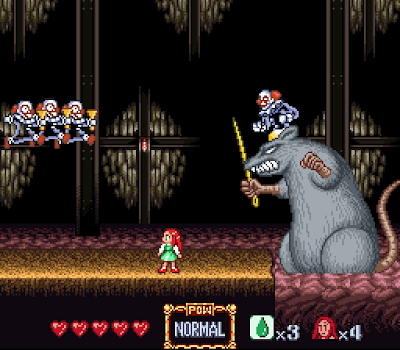 That's right, he's an evil (as though there is any other kind...) clown riding a giant rat armed with a sewing needle. Between the doll boss and the clown, this game really does have a grasp of the things in this world which are just inherently creepy. As you can see in the picture, Pennywise up there can turn you into what is either supposed to be a child or a doll. The one good thing about having clowns in videogames is that it generally gives you the opportunity to beat a clown to death; this is not an opportunity I like to pass up. Clown defeated, it's on to the final stage. 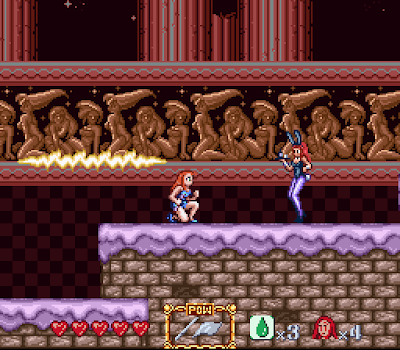 A happy place indeed. It is also the most irritating level in the game, as you have to use your newspaper wand to create platforms to get around, all while your previous platforms keep disappearing, the gravity keeps changing and you wrestle with Mikami's fairly loose interpretation of when you pressed the jump button. Nice of them to try something different, but ultimately it fails. The boss of the stage is a goofy horse demon who, being a horse demon, naturally sends out a schoolgirl samurai to fight you. 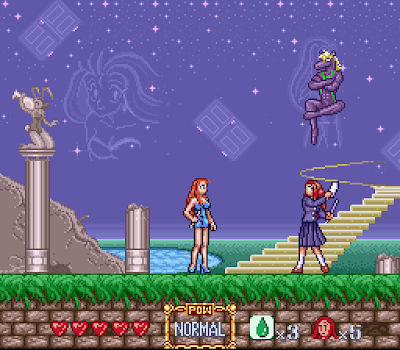 I like his nonchalant pose. This kind of thing must happen to him all the time. Once his girl is defeated, he drops down to the floor and scurries around on all fours, crying, until you beat him to death. What happened to you, Horse-Demon? I used to look up to you, man. And that's the end of the final stage. Of course, it's not the end of the game. All the crystals are gathered and the statue is complete, but instead of the Good Thing that I think Mikami was expecting, a Bad Thing happens instead, and the final boss appears. 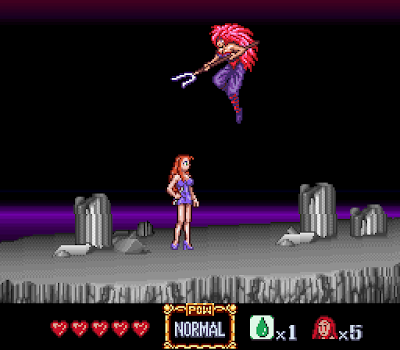 Your final battle is against this pitchfork-wielding devil lady, who looks like she has just escaped from an 80's hair-metal band called Black Sapphire or Layzzer or something. She jumps around a lot and fires blue ghosts at you, but she's really not that much of a challenge. In fact, GSM is actually pretty easy all round, and that made quite a refreshing change. 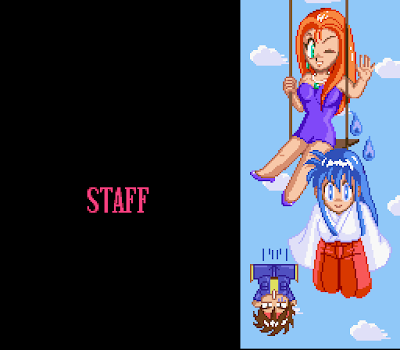 It's not a brilliant game by any stretch of the imagination; it's short, the level design is a bit bland and jumping in particular seems unresponsive. But it is a decent little time-waster, it's got some interesting enemies and the music is pretty nice too. In fact, I'd go so far as to say the music's the best bit.

So, give it a go... or not. But best to play it now, around Hallowe'en, hmm?
Posted by VGJUNK