As incredibly rugged and manly as I am, sometimes even I need a change of pace from the standard "fly through space shooting space-aliens in space with your space-ship" plot of your normal side-scrolling shooter. So today, instead of spaceships and aliens it's cutesy witches and fairies all the way with Success's 1994 SNES testosterone-reducer, Marchen Adventure Cotton 100%. 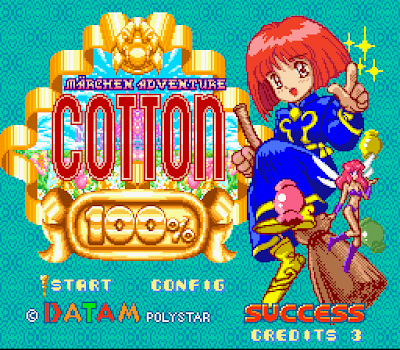 There really isn't all that much to explain about Cotton 100%. It's Gradius with an anime witch instead of the Vic Viper, and instead of Options you get tiny forest sprites with death-dealing magic powers. Unlike many side-scrolling shooters, there isn't even a section where you fly upwards or something mind-blowingly innovative like that: strictly left-to-right, this one. That said, it's got some nice touches, so here's a quick run-through. 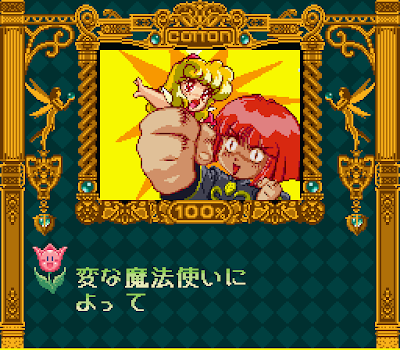 All you really need to know about the story is that Cotton is a witch who has a fairy friend called Silk, and Cotton wants, desires, lives for only one thing: to eat a kind of (one assumes) delicious magical sweetie called Willows. I think there's also a seperate element of the plot whereby Cotton has been framed for kidnapping some other fairy, but I can't read Japanese so your guess is a good as mine. Unless your guess is something involving the invention of the steam engine or the economic structure of Belgium in the 1870's; in that case, your guess is nowhere near as good as mine.
So off Cotton flies on her little broomstick in search of the mystical and succulent Willows. She may not be humanity's last great hope or anything, but goddamn she really wants those sweets, and selfish greed is as good a motivator as anything. Stage one is some kind of fairy forest, and it truly is an all-out assault designed to surgically penetrate the cuteness-receptors in the brain and turn them into so much congealed glitter and jellied rainbows. 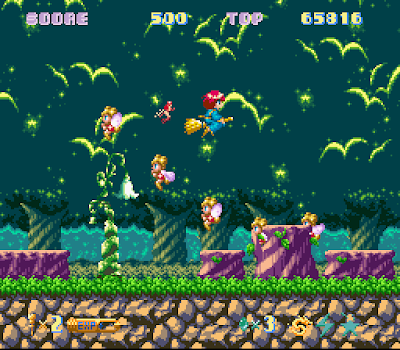 Cotton doesn't receive power-ups in the standard shoot-em-up manner or finding them drifitng through space: instead, she has an experience bar which you can fill up by grabbing the crystals dropped by defeated enemies. Level up, and Cotton's shots become a little more powerful. Sadly, she only has one weapon type for the whole game, but hey ho. It never bothered the tank in Space Invaders. The cuteness is somewhat tempered by the sudden arrival of the stage's mid-boss, a creepy, floating jester's head whose lips have the appearance of an internal organ torn from a large animal and stuck on an Easter egg. 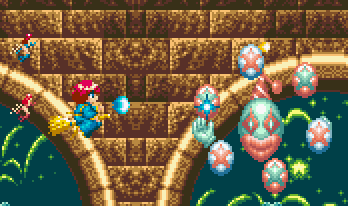 Brr. Well, let's counteract that horror with this little guy:

These flying eyeball monsters are everywhere, and darn sweet they are too, flappin' around, not caring that they're grotesque travesties of nature with poor depth perception. The boss is no such hideous freak, however, because he is a giant pumpkin. 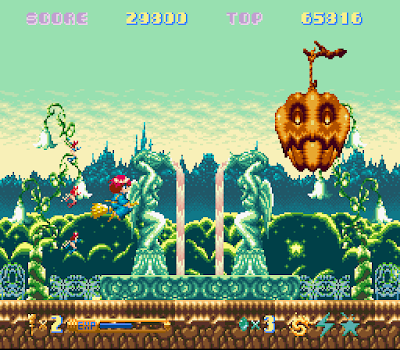 Somehow, he is suspended from a hovering tree branch. Probably best not to question it. Look, just don't mess with him - he's a giant pumpkin, he could crush you like a gnat. Once he's beaten, you get to play a minigame that is very close to my (sterotypically) British heart: TEA TIME. Oh yeah, it's TEA TIME and it is on! Cups of TEA fall from the sky, and rather than avoiding the boiling beverage like any normal person would, you have to manoeuver Cotton underneath them. You're essentially trying to scald a little girl for a small amount of intangible, meaningless points. You sick fuck. 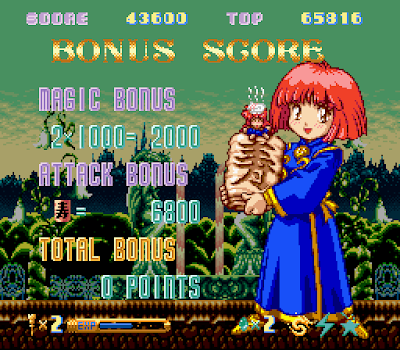 Stage two is a climb up a snowy mountain, shrouded in clouds. Clouds come in many forms: a nice fluffy cumulus, the majestic brushstrokes of a cirrus-filled sky, and or course, the cloud that looks like a baby that's just filled its nappy. Then you shoot said baby-cloud and its bloodshot eyes fly out of its head.

Haunting, I'm sure you'll agree. Speaking of haunted-looking eyes, there are also some flying, living knives:

Their eyes are halfway along their blade, which means every time they stab something, their eyes go into the wound. Truly, a cruel god sits in judgement of Cotton's world. The boss of stage two is nothing less that a baseball-playing snowman. 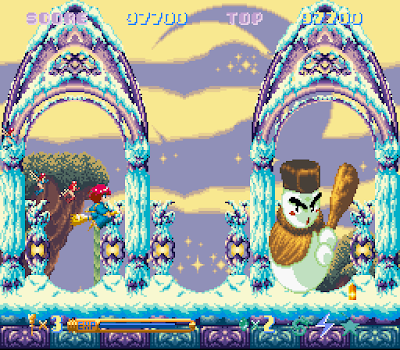 His expression is one of a (snow)man in deep concentration. And look at those eyebrows! He's the Kenshiro of snowmen. Whatah!
Stage three is set in a castle, and has two main points for discussion: One, it contains a cute little chimera. D'aww. Two, it also contains the most adorable anthropomorphic representaton of all men's ultimate and inescapable fate. 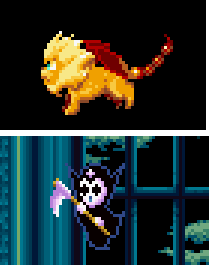 You wouldn't take Lil' Death there seriously if he showed up to claim your immortal soul, would you? The mid-boss is... well, he's something. I think? 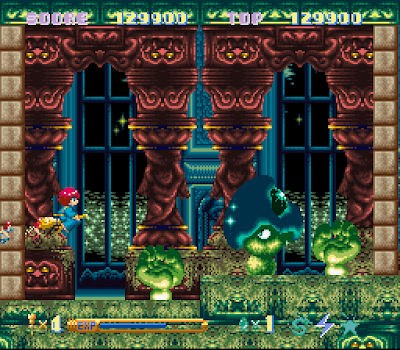 I have not one clue what that is supposed to be. Mushroom monster, perhaps? Giant mummified penis? Answers on a postcard, please.
The main boss is a stupid snake thing with a perpetually dazed expression who keeps ramming his head into the ceiling and creating boulders for you to dodge. 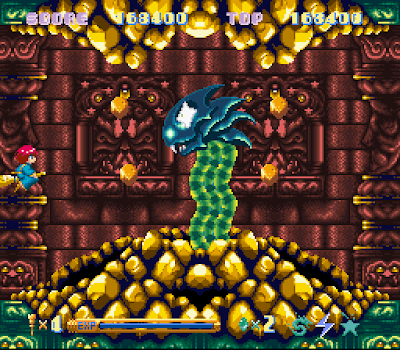 After the baseball snowman, he ain't all that.
Stage four next, and it's back to the forest. It's filled with annoying little elves now, however. They're everywhere, firing arrows and generally being fey and annoying like all elves ever. Apart from Santa's elves. They don't have time to be graceful guardians of the forest, because they've got proper jobs, unlike the forest elves. What a bunch of douchebags. As you can see, the elves were starting to get me down until I was rescued by this little guy:

A pumpkin man with a pumpkin head and just the faintest hint of a smile. I wish he'd just be my friend and I didn't have to blast him with my magical powers. The mid-boss, perhaps unsurprisingly given that we're in a forest, is a tree. 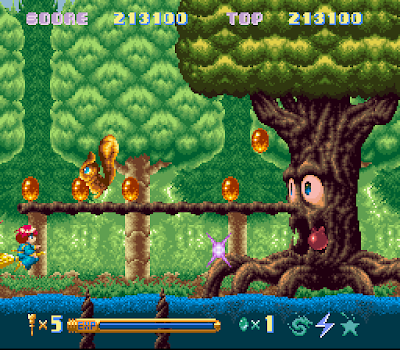 For a moment I thought I'd wandered into a Kirby game. Give the tree enough punishment, and he extends his nose-branch, allowing a squirrel to run out and attack you. I shot that squirrel. I shot him good, and I felt good. Anyone who thinks Cotton is less brutal than your normal space-based shooters is a fool. In R-Type or whatever, you're shooting a clear aggressor, usually one with vastly superior firepower. In Cotton, you can fry a squirrel with magical lightning. I know which sounds more brutal to me.
The stage's main boss is a doll with rocket mittens and the ability to detach her head. As you fight, her head gradually becomes a skull, which is what I always imagine happens to ordinary dolls when you close your eyes at night. It's a good job that Cotton is fairly nimble, because it's harder than you might think to avoid a flouncing ballgown. 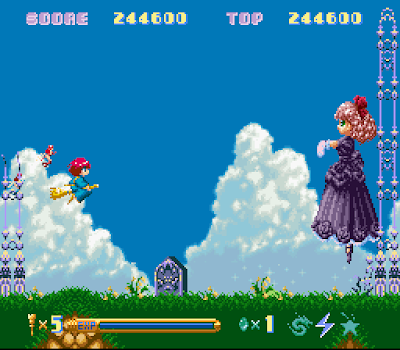 Stage five is set in an underground lava cave, filled with the fireball-shooting lava pits from every Super Mario game ever. It's a pretty dull level with no new enemies and no real surprises. Its one redeeming feature is the boss, who is a giant lava chicken. 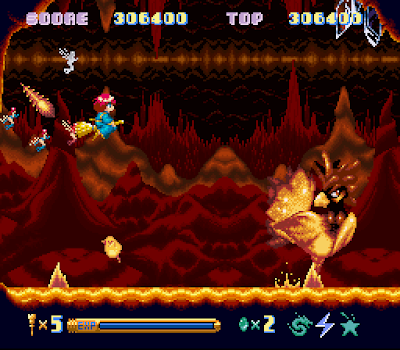 God's greatest gift, the chicken that cooks itself! Judging by the look on the baby chick's face, he has reached Nirvana, or has at least just won ten pounds on a scratchcard. Although... is it just me, or does the lava chicken look like a Spearow from Pokemon? 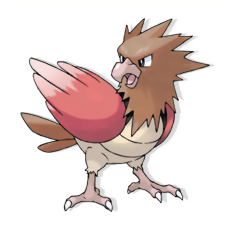 Stage six is an underwater adventure, but it isn't nearly as irritating as that sounds. There are some bubble jets that push you around and, okay, they're a little annoying, but it's nothing that'll make your capillaries burst with rage or anything. This being an underwater stage the boss is, of course, a crab. 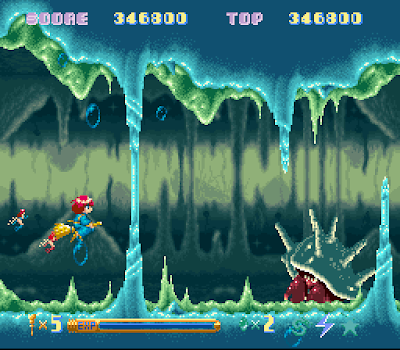 Yes, he fires bubbles at you. Not pictured is the other boss, which is a kind of sea dragon thing that spins around a whole bunch, You're not really missing anything by not seeing him.
Our witchy heroine bursts into the final stage, which is a castle with some questionable decor. 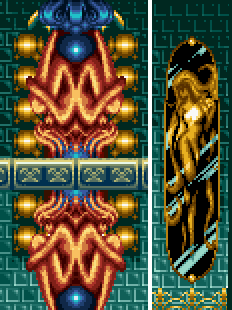 On the left, a supporting pillar made up of naked chicks. On the right, a mirror with a naked chick in it. They look like the furniture you might find in a parallel-universe version of Stringfellows. Cotton flies past a huge mirror, and if videogames have taught me one thing it is that there is always, always an evil doppelganger waiting in the mirror. Sure enough, Cotton's evil mirror twin appears and tries to kill you. No, she doesn't have a goatee. 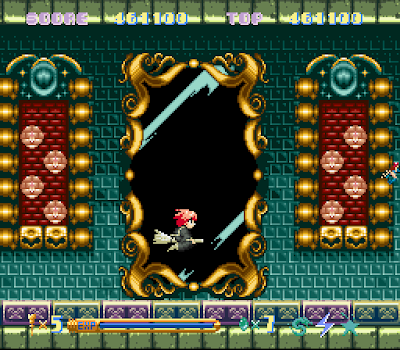 She's one of the more interesting boss fights, at least, mostly because you're chasing after her/yourself and partly because for someone who is a rubbish at shoot-em-ups as I am, she's at a nice difficulty where it's a challenge but not too hard. Once your twin is dealt with, it's on to the final boss. 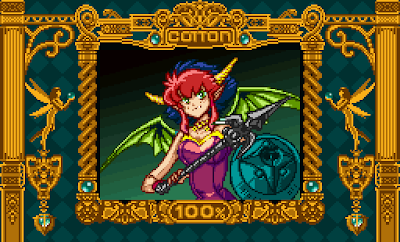 It turns out this devil lady was behind everything (I think). In a shocking break with final boss etiquette, she deigns to fight you relatively fairly, with no minions or transformations into giant hell-beasts. She starts off flying around with a shield... 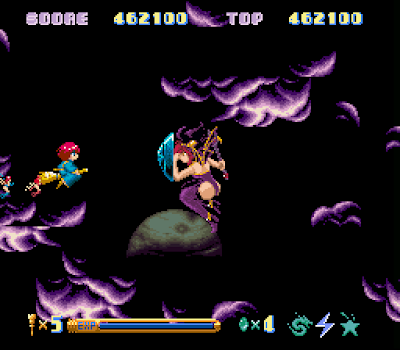 And then she goes all Super Saiyan... 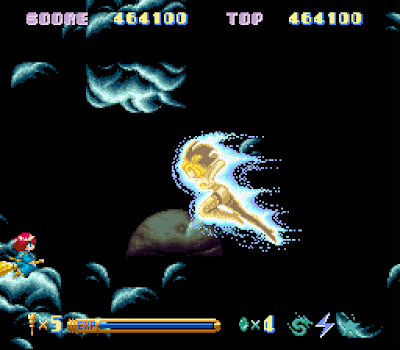 And then she's dead. Cotton ends up with one tiny Willow sweet, a turn of events which does not please her. I think the general plot is that while Cotton was on her mad, selfish quest to collect these sweets, she inadvertantly saved the kingdom. That's the kind of hero I'd like to see more of; the kind that doesn't actually do anything heroic but still wins. Like Flashman. That's right, I just compared a cute little anime girl to one of the true bastards of British literature, and I'd do it again! 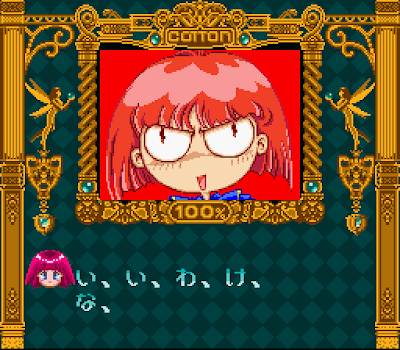 And that's your lot. Marchen Adventure Cotton 100% is fun, and goofy, and worth a quick blast if you fancy a change from the normal side-scrolling shoot-em-ups or, like me, you have a strange fixation on pumpkin-based enemies.

BONUS!
Here's the Japanese TV ad for the game.