In lieu of a proper intro, let's just say that professional footballers are not generally a group renowned for their attractiveness. For every David Beckham there's an Ian Dowie, for every Thierry Henry a Peter Beardsley. Still, if you're going to market a series of football games then you have to use pictures of actual footballers, right? Well, we shall see as I take a quick look at the history of the cover art used in Konami's Pro Evolution Soccer series. 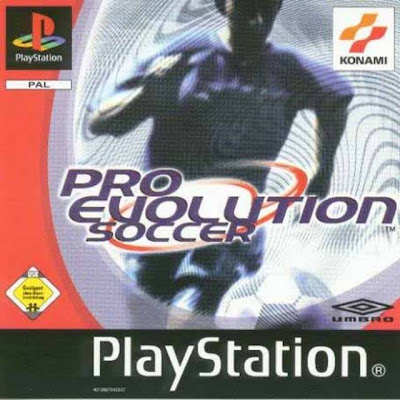 The first game in the series, and instead of a famous overpaid prima donna footballer, the cover features a shadowy figure chasing after a ball. Perhaps he's in some witness protection scheme, given a whole new identity as a professional footballer after witnessing a Mafia hit. Sadly he's fifty-two and he used to be an accountant, so it doesn't work out all that well. There's no evidence that this guy's even a footballer: sure he's chasing after a football, but I once chased after a man dressed as the Joker and it didn't make me Batman.
Retro Appeal Rating: 4 / 10 - Although give it another five years and it'll be like seeing the original Pokemon. 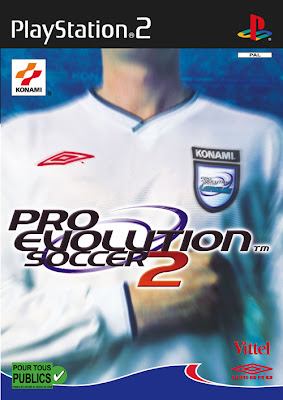 Or Torso: The Videogame. It's probably that same man from the Pro Evo 1 cover, still hiding his face to protect his identity from vengeful crime lords. His blurry left hand appears half-raised in some militaristic salute, perhaps a part of his pre-match ritual that sees him praying to the gods of ancient Rome.
Also, say goodbye to the old Konami logo. Gone, but not forgotten.
Umbro Logo Rating: 2 / 10 - The inclusion of only two small logos represents a missed opportunity, given the large amount of unused space available. 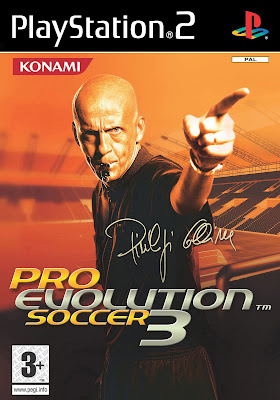 This man right here is called Pierluigi Collina. He's that rarest of beasts: a famous football referee (or at least he was until he retired), and even rarer than that he was famous for being a good referee. That kind of thing just doesn't happen. So, Konami have gone from selecting faceless players to referees as their cover stars, which is a little like releasing a Sonic the Hedgehog game and having a big picture of the continue-point lollipop thing as the box art.
True fact: Pierluigi Collina auditioned for the role of the evil Red Skull in the upcoming Captain America movie, but his performance as the villainous Nazi was so terrifying the film would have had to have been reclassified with an 18-rating for cinema release. Shame really; they could have saved a fortune on special effects.
Orangeness Rating: CRITICAL. 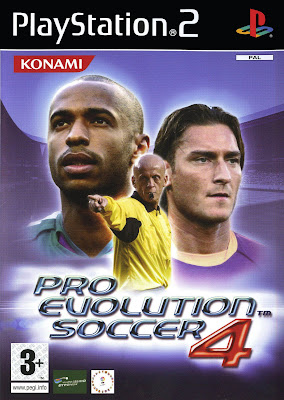 Mr Collina returns, and this time he's finally dragged some actual footballers onto the cover, in the form of Thierry Henry and Francesco Totti. Collina points at something that has displeased him while the two footballers stare off into space, unable to meet the gaze of the viewer like lovers after a premature ejaculation.
Notice the odd way the "Pro Evolution Soccer" text has been rendered, making it look like something you might see airbrushed onto the side of a particularly unsafe fun-fair ride.
Resemblance to Some Kind of Footballing Mount Rushmore Rating: 5 / 10 - Not bad, but it could do with some David Beckham to really draw the tourists in. 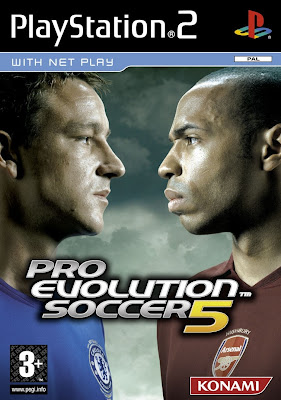 Thierry Henry returns, this time joined by Chelsea's John Terry. Thierry is unaccountably angry about something; you can even see the vein in his temple. But wait, have I misread the situation? Have I mistaken for a look of rage what is, in fact, a frisson of sexual tension? They're certainly staring into each other's eyes. Their shirts may have been airbrushed enough to hide the telltale signs of nipple erectness, but there's no mistaking that look.
Sexual Tension Rating: 8 / 10 - Good work, Konami. 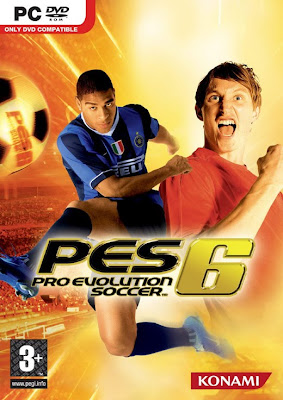 For the sixth cover (Swedish ver.), Konami have put Adriano in the awkward position of trying to look cool while Kim Källström stands behind him and tries to replicate the facial expression of a man who has just accidentally closed a briefcase on his penis. To be fair to Adriano, he pulls it off well, although his slightly raised eyebrow gives an insight into his disdain for the whole sordid affair.
Kim Källström Rating: Seven Kim Källströms, one for every day of the goddamn week. 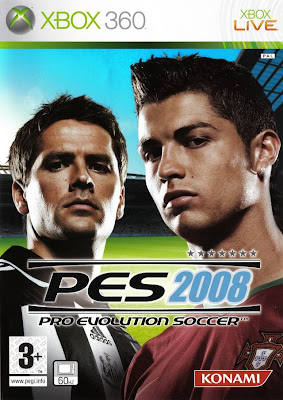 Numbered sequels? Fuck 'em, because once you get past number four it looks weird, and anything past six just looks downright cheeky. So from 2008 onwards the Pro Evo games are differentiated by the year they were released, until people cotton on that they're paying full price for a small yearly update and Konami have to start choosing a title by picking random words out of the dictionary or something. Pro Evolution Soccer: Cockney Geode for 2012, I suspect.
As for the actual cover, it features whining, grease-coated cockbag Cristiano Ronaldo, a man who falls over unprompted more often that a one-legged man with an inner ear problem. Oh, and Michael Owen. For someone who has played for some of the world's biggest clubs, battled a gambling addiction and whose sister was almost kidnapped, Michael Owen is boring as fuck. Plus, he was playing for Newcastle when this was made, thus proving him completely irrelevant.
Ronaldo and Owen appear to be having some kind of competition to see who can look the most smug. Owen should give it up now; smugness is Ronaldo's default facial expression, you'll never top him.
Smugness Rating: 9 / 10 - Michael Owen is just letting the side down slightly, costing them full marks. 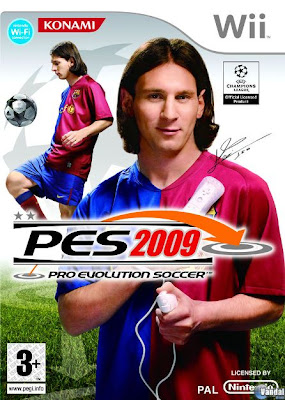 This is the Wii version cover, and it features a rare picture of footballing wizard Lionel Messi during his stint in a 1990's "Madchester" band. Messidelica, they were called. I can't bring myself to write anything mean about Lionel Messi. Just look at him! Those puppy-dog eyes, that winsome smile, the way he clutches his Wii remote to his heart like it really means something to him. He does a lot of charity work, you know. You should go out with him. Even your racist old nan would like him, as long as he learnt English and didn't sponge off the state.
Bitterness Rating: 3 / 10 - The lowest it's been for years, and still falling as I look at his cheeky little smile.

Messi returns, and he's brought a friend! It's Fernando Torres, proud holder of the Premier League's "Player Who Looks Most Like a Teenage Girl" title until recently when it was snatched away from him by newcomer Javier Hernandez.
Neither Torres nor Messi are looking at the ball. They're just not interested. Maybe they cared in times past, while the photographs were actually being taken and before the Photoshopping that gave Messi an oddly elongated torso began. At least, I think it's been Photoshopped to look that way: maybe Messi has some hyper-evolved, segmented torso that helps him be just so darned good at football.
Number of Logo Stars Rating: 9 / 9 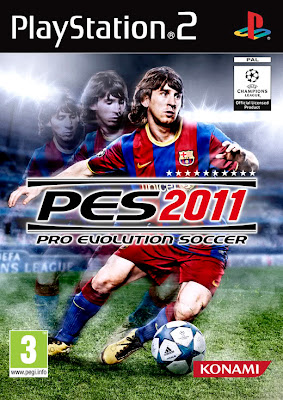 Having killed Torres and eaten his heart, Messi's power level increases to a point where he develops some kind of time-distortion super power. He still won't look at the ball. If I was feeling particularly nerdy, I'd say he's selected a V-ism Groove. but then I'd be in the awkward position of admitting I'm a geek who likes football, something that I'm told may cause the very Earth itself to split in twain.
Also, golden boots. Normally a sign of pomposity, but in Lionel Messi's case they are fully justified. Konami really made a smart move in getting Messi for their covers, seeing as he's better looking, better at football and just all-around better than FIFA's representative, Wayne Rooney.
V-ISM: 100% - There, I did it anyway! Ha!