It's not all sweetness and light in the Mushroom Kingdom, oh no. There are dark things there, just waiting for their chance to take down Mario and assist in the glorious counter-Princess Peach revolution. 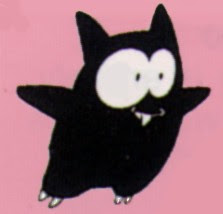 Oh how adorable, a bouncing little gymnast thing. Still, those teeth look a sharp. They could probably give you a nasty bite, but I'm sure Ninji won't be doing that, will he? Look at him, he's adorable!
Well, he'd be a lot more adorable if he wasn't the Mushroom Kingdom's version of a ninja. That's right, the Mushroom Kingdom contains a race of remorseless hired assassins. Mario should consider himself lucky to have made it through Super Mario Bros. 2 without a poison-tipped dagger being embedded between his shoulderblades. This is almost certainly why all Bower's fortresses are of an all-stone construction - it stops the Ninjis from carrying out the standard ninja technique of sneaking into a castle and setting it on fire.

You remember the Rocky Wrench family: they're the little bastards in SMB3 that pop out of manholes on the airship stages and throw wrenches at you. I always thought they were moles, you know. They look like moles, they come from underground, their tinted goggles replicate the mole's famously impaired vision. They're not moles, though. Look at their artwork; they've got a mole-ish face, but a Koopa-like shell. Now, the Super Mario series has a mole enemy in Monty Mole. It also (obviously) has turtle enemies. What you're witnessing in Rocky Wrench is one of Bowser's twisted eugenics projects, a forced union between Koopa Troopa and Monty Mole, an inter-species offspring so hideous they're forced to live in the dark bowels of Bowser's airships. Mario's really doing them a favour by crushing their skulls beneath the heel of his boot. 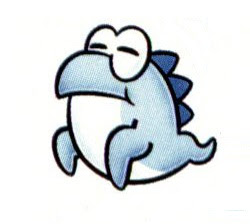 For the star of a videogame series that's usually the epitome of super-rainbow-happy-fun-times, Mario sure does come into contact with a terrifying spirit-world full of vengeful undead creatures on a regular fucking basis. Normally it's the Boos, everyone's favourite bashful soul that's trapped in limbo, but Super Mario World also features Eeries.
They're dinosaur ghosts that look like a Yoshi. More specifically, they look like baby Yoshis:

Are we to assume that Eeries are the ghosts of dead baby Yoshis, forever condemned to roam the Ghost Houses of the Mushroom Kingdom, never getting to grow up and experience the joy of having a fat plumber ride them around? Yes, yes I think we are supposed to assume that. The darkness at Shigeru Miyamoto's heart is becoming ever clearer. I expect the Nintendo hit-squad to arrive any moment to silence me now that I know the terrible truth. 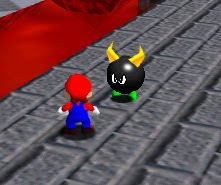 Appearing in Super Mario 64, Bully stretches use of the term "Character Design" to breaking point by consisting of little more than a black sphere with horns and googly eyes slapped on. "Right boys, that's another enemy designed. Next! How about... a cube with eyes! What do you mean we've already got Thwomps?!"
Bully's not here because of his design though; he's here because he is, quite simply, a dick. His name is appropriate, because all he does is run into you and knock you about, clearly furious at Mario for some undisclosed reason. "Bully" seems like something of an understatement, though: my schooldays were a while ago now, but I'm pretty sure bullying stopped short of trying to body-check someone into a pool of lava. Maybe that kind of thing went on at the tough inner-city comprehensives. 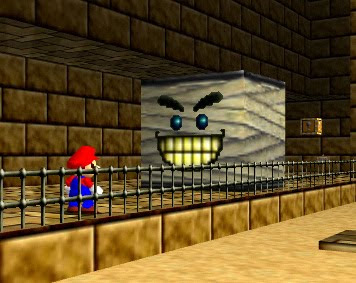 Speaking of cubes with eyes, here's Grindel. He wants to hurt you, Mario. Can't you see the psychosis lurking in his smile? Grindel feels nothing... until he's grinding your bones beneath his weight, when white-hot ecstasy courses through his veins (bandages? teeth?) and he is, for a brief moment, sated.

A Piranha Plant that has gained the ability to move around sounds like something that could be a real threat. Sadly, the Ptooies' evil ambitions are hampered by the spiked ball they have to keep balanced over their mouths at all times. Imagine if medieval knights had to do battle whilst balancing a rolled-up carpet on their head, and now stop imagining it because it's quite funny and undermines the very serious point that I'm trying to make.

What kind of evolutionary imperative would prompt this trait to emerge? Maybe I'm just not seeing the big picture, but I just don't see the benefits of having a steel ball constantly hovering over your head, ready to crush you at any moment should you lose concentration for even a second.
Of course, they probably didn't evolve. We've already seen the results of Bowser's genetic meddling in Rocky Wrench. He'll try anything in his insane quest to manufacture the perfect soldier, even if it means crossing a houseplant with a mace. 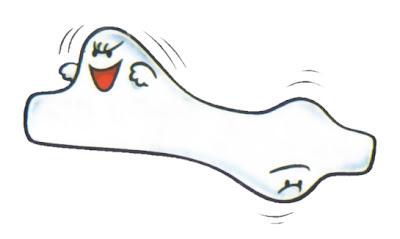 The rare and mysterious Stretch is found only in SMB3, waiting in some of Bowser's many fortresses. Taking the form of platforms, they wait for a portly plumber to jump on them and then bam, ghosts pop out and travel around the platform, hoping to collide with our hero.

That... that is horrible. Imagine that, after death, you discover that there really is an afterlife. Your soul remains in the land of the living. You drift aimlessly through the world, hoping that one day somebody can put your spirit to rest, until one fateful day when some turtley-dragony-dinosaury overlord thing offers you a chance to join his army. You see the proud ranks of assembled troops, the Troopas with their shining shells, the mighty Hammer Bros commanding crack strike teams of Para-Goombas and you think yes, I could be something here. You join up, go through basic training, form friendships with the other Boos, until the day you receive your orders: you have been assigned to "Operation: STRETCH".
Years pass, every day the same, trapped on this one platform by Bowser's dark magic. You see the other Boos, the fortunate ones, floating freely through the castle. Grinning. Laughing, the lucky bastards. You lie in the dark and wait. That's all you can do, wait and pray that one day soon The Plumber will arrive and he'll be as powerful as they all say; he can put an end to your suffering and finally free your soul.
He never comes. You wait, trapped, in the dark. 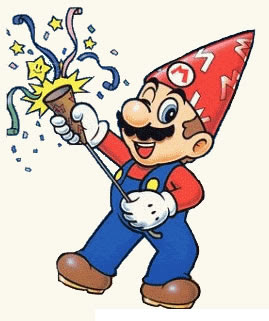 Well, that was cheerful, wasn't it?

Most pictures taken from the Super Mario Wiki.
Posted by VGJUNK