Come with me, back to a time when you could turn on your TV and watch a huge man dressed as a drill sergeant drop-kick a voodoo priest, a time when the hair was long and lank, the theme songs were more bombastic than an eagle dropping an atom bomb on a vodka-swigging bear and the muscles bulged like a condom with a sack of potatoes poured inside. I am, of course, talking about pro-wrestling's glorious zenith: the WWF of the early nineties. There were plenty of WWF games made at the time, but today I'll be looking at one of the lesser-remembered ones: Technos' 1991 off-the-top-turnbuckle-em-up WWF WrestleFest. 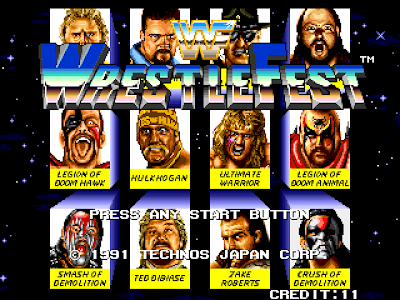 When I was a kid, the WWF was pretty much the most exciting thing that existed, with every convoluted twist and nonsensical turn of the story demanding my utmost attention, the lives of these oily neon gods seeming like a religion worth following. If you'd declared that Bret Hart was the Second Coming of Christ and The Undertaker was Satan given mortal form, I would have believed you. I'm sure part of me knew that it was fake, probably due to attempting a suplex on my little brother and almost killing him or something, but (and this is the important bit) I didn't give a shit.
What I'm getting at is that wrestling from this era was something that I loved dearly and holds a large amount of nostalgic power over me, so this article may have something of a bias toward a general feeling of awesomeness.
First off, WrestleFest gives you two two game modes to choose from: 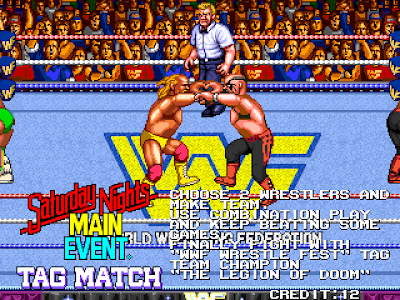 The main mode is "Saturday Night's Main Event", where you pick two wrestlers, form a tag team and battle your way through a series of computer-controlled tag teams until you reach the championship match with the Legion of Doom. 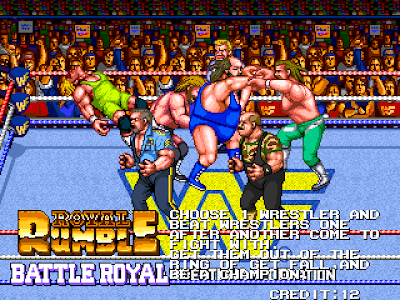 The other mode is "Royal Rumble". You choose your fighter and get plonked in the ring with five other wrestlers. If a wrestler is pinned for a three count, submits from a hold or is unceremoniously tossed out of the ring like a Christmas tree in mid-January then they're eliminated and a new wrestler jumps into the ring. This goes on until either a) you're eliminated or b) everyone else is.
Of course, the WWF's main appeal lay in the personalities of the wrestlers, so let's take a look at the mean mountains of muscle at your command.

The most golden of tresses, the most orange of skin, a man who was so perpetually pumped-up he couldn't even take his shirt off with damaging it: Hulk Hogan was, is and probably always will be the world's most famous wrestling star. His portrait in WrestleFest doesn't quite capture his full glory, as they seem to have given him a rather severe lazy eye. Let that be a lesson to you, kids: don't use steroids or your eyes might fall out.

A terrifying golem made of muscle, feathered hair and neon ribbons, The Ultimate Warrior (real, legal name- "Warrior") eschewed the standard WWF practice of cultivating a gimmick or ring persona by simply being a complete nutjob.

AKA Curt Hennig, Mr. Perfect's gimmick was that he was, well, perfect. In an example of what made the WWF great, a man called "Mr. Perfect" wasn't even the most narcissistic wrestler around, a title which went to "The Narcissist" Lex Luger.
Big Boss Man

An angry Southern police man, seemingly designed to make impressionable children distrust and fear authority figures. Possibly a decent strategy, as I imagine kids would have a lot more respect for the law if they thought a policeman was going to turn up and piledrive them for nicking a few sweets from the tuck shop.

With his military theme and drill-sergeant demeanour, Sgt. Slaughter proved that American entertainment is sensitive and respectful when he was portrayed as a traitor to America who worked with an evil Iraqi general during the Gulf War. Classy.

His gimmick is lard, and boy does he know how to use it. By sitting on you, that's how.

Jake clearly isn't an actual snake. You've lied to me, WWF! But he did carry one around with him a lot, and that time his cobra bit Macho Man Randy Savage was the stuff of playground legends: for possibly the first time in recorded history, a man in tights sporting the unfortunate "receding mullet" hairstyle was the coolest man on Earth.

My all-time favourite wrestler - while all the other kids wanted to be The Hulkster or Bret Hart, I was always DiBiase. Why? Because he was an absolute dick, that's why. His schtick was his vast wealth, which he used to pay people to perform humiliating acts, buy the support of wrestlers and, best of all, create his own diamond-studded "Million Dollar Belt" because he couldn't win a proper title. I personally find it very hard to dislike a man who can think around problems like that.

Sorry, Crush and Smash, but I just don't remember you. I'm sure you were cool and all, but when it comes to face-painted tag-teams with violent-sounding names, there was only one pair of villains to turn to...

I'm not sure the Legion of Doom understood the concept of the word "legion", but it didn't matter: the two of them were as powerful as a thousand men. Okay, maybe not in real life, but they are in WrestleFest. They're your final opponents in the tag-team mode, and they're much harder than everyone else you'll face. 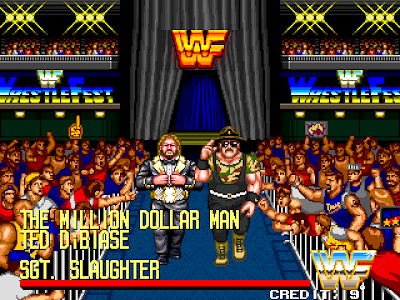 The gameplay is essentially the same as Technos' previous effort, WWF Superstars. The controls are simple enough: you've got a punch button, a kick button and pressing them both together makes you run. Obviously kicking and punching is no way to kick ass in a wrestling game, so you'll be wanting to grapple with your opponent and bust out a devastating move. Okay, sure, but here's where I sort of lose track with WrestleFest: I have no idea how the grappling works. 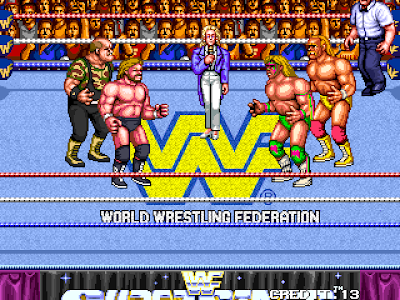 Okay, I have some idea what's going on. Once you're grappling with your opponent, pressing punch gets them in a headlock. You can drag them around by the neck for a while, or you can press punch again to perform a damaging move or press kick to Irish whip them across the ring. That makes sense, but what I don't understand is how you win the grapples. In most wrestling games, Royal Rumble on the SNES for instance, you have to mash the buttons to win the grapple in a sort of tug-of-war system, but this doesn't seem to be the case in WrestleFest. So, sometimes you win the grapple and sometimes you don't, and there doesn't seem to be much rhyme or reason to it, unless like me you're playing as Ted DiBiase and you can safely assume that whenever he wins a grapple, he paid the other wrestler to let him win. 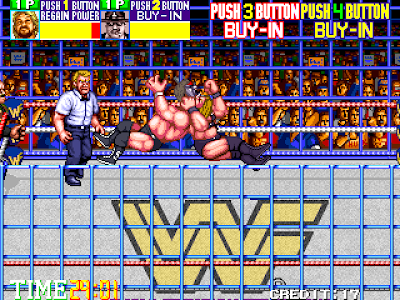 The confusing aspect is that you're never sure what move's going to come out of the grapple if you do win it. At least this bit seems to make a little more sense: certain moves are more likely to come out when you're in a certain position or if you or your opponent is low on health.
Other than the confusion regarding the grappling (and that might well just be me not getting it), the gameplay is a lot of fun. Your characters move around smoothly, and getting them to do what you want (climbing up to the top rope and jumping on a downed opponent, for example) is intuitive enough. 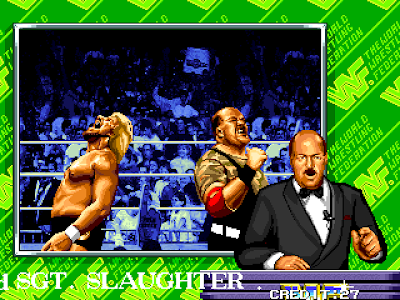 The main gameplay challenges don't so much come from the fighting, but effective use of your partner. Every so often your partner will "power-up", as indicated by it subtly saying POWER UP over their health bar. If you tag them in while their powered up, they always win their grapples and do more damage. In general, most of the strategy comes down to making good use of tagging out. Of course, this works both ways: if you're trying to pin someone, their teammate will run into the ring and kick you off. Unless, that is, you take control of your teammate and stop their teammate from preventing you from making the pin. What? Where was I? I confused myself a little there, but trust me, it all makes sense and works nicely. You can even drag people over to your teammate and let them batter your foe while you hold them still. 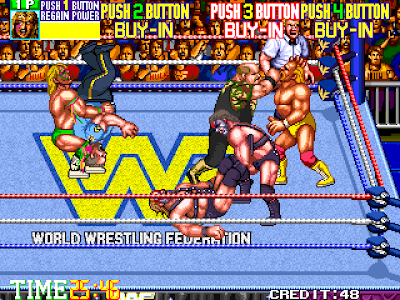 The moves themselves are all nicely represented, and few things in this world are as satisfying as giving someone a digital piledriver, complete with meaty-sounding sound effects. Best of all, everyone can perform their signature moves! Hulk Hogan's got his flying leg drop (large man jumps on you), Earthquake's got his Earthquake Splash (huge man jumps on you) and Ted DiBiase has the Million Dollar Dream (large man strangles you until you lose conciousness). 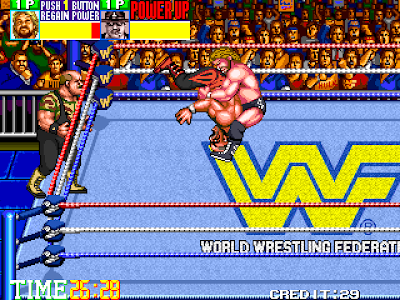 Graphics wise, I love WrestleFest, I really do. Aside from a couple of wonky portraits and the extremely feeble-looking kick animation that everyone seems to have, they're excellent in a very specific way that really captures the over-the-top, day-glo glow nature of WWF at the time. Everything feels "big" in an undefinable way that, at the time, only arcade games could deliver.
Sound-wise, the effects are good and solid, and there's even commentary. Sure, it's occasionally garbled, but you get the idea. As for the music, I can't really say I heard that much of it over the sounds of men bashing into each other, but I did notice that the start of the intro music sounds like the wedding march from some parallel dimension, perhaps an alternate universe when humans re-evolved from wrestlers, who were the only survivors of a global catastrophe.

Like I said at the start, nostalgia was always going to play a part in shaping my opinions of WWF WrestleFest. Would I enjoy it as much if it didn't have the WWF license and instead featured poor imitations like Henk Horgan, Mr. Flawless or Major Carnage? Okay, bad example, because I would love it if it was like that, complete with a poorly-translated intro that explains they're fighting to become the "Number One Quarreler". You know what I mean, though, and yes: the WWF license and my nostalgia do make a difference. In the end, though, it makes much less of a difference than I though it would. WrestleFest is a solidly put-together game, and it's fun, pure and simple; nothing complicated, just good clean arcade fun. Whack it on four-player mode, start up a Royal Rumble and prepare for good times. As the late, great Macho Man Randy Savage would say: OOOOHHH YEEEEAAAHHH! 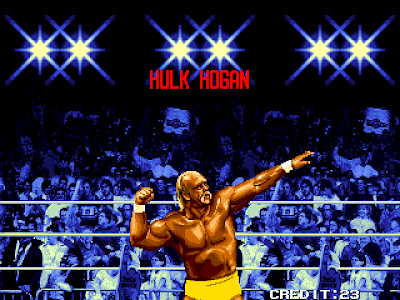