THE TYPING OF THE DEAD

Get out your party hats and miniature sausage rolls, because this is the 100th entry here at VGJUNK. Truly, a landmark event. Instead of some grand tribute, here's a look at something some people might not consider a videogame at all: Sega's 2000 touch-type-em-up, The Typing of the Dead. Yes, you read that correctly. 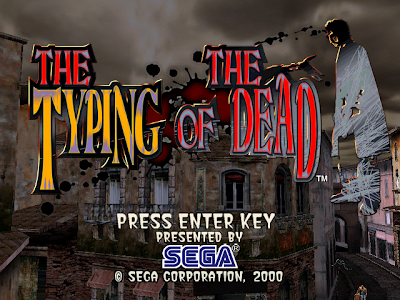 You might have heard of Typing of the Dead, possibly referenced in some "top ten weirdest videogames" chart, derided as an example of that particularly Japanese brand of oddness. If you haven't heard of it, it's a typing tutor that thinks it's an arcade lightgun game. That may sound about as good a mix as a jam-coated baby and a swarm of wasps, but trust me on this: it's good. 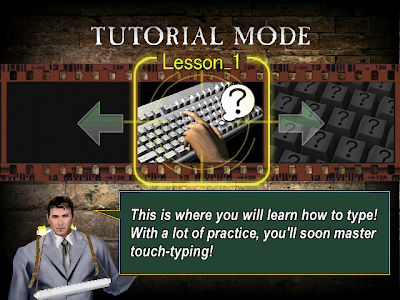 The game itself is a modified version of Sega's undead-blastin' lightgun classic The House of the Dead 2. Brave agents of the AMS battle against the mysterious Goldman and his hideous army of ghouls, so far so normal, except instead of guns they use words. Quickly and precisely typed words, to be specific. 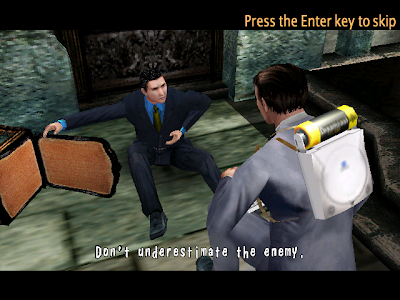 Typing of the Dead is surprisingly generous in the amount of game modes and options available to you, but your first port of call will probably be the tutorial mode. Here, TotD's real agenda becomes clear: it wants you to learn how to touch-type, and if battling against hordes of vicious demons is the best way to accomplish that then by God that's what you're going to be doing. 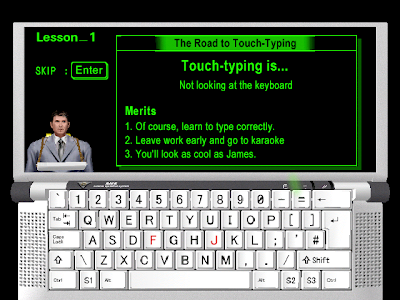 The tutorial mode is pretty much what you'd expect, telling you where to put your fingers, what finger you should type a given letter with and so on, all dictated to you by your main character, James the AMS agent. You'll start getting glimpses of TotD's absurd sense of humour, too, like the merits of being a good touch-typist shown in the picture above. Unfortunately, my typing skills make me look like a neanderthal that's been accidentally transported through time and space and into an internet cafe, so I'll never be as cool as James. 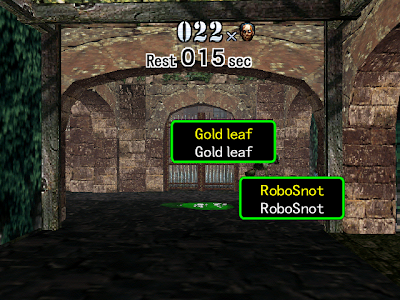 The other modes are all about getting out there and blasting zombies with the clickety-clackety power of fingers mashing keyboards. There are the original and arranged modes of House of the Dead 2 to play through, a series of specific "drills" designed to make you better at various aspects of typing, a boss battle mode and even a competitive mode against a second player or, with the right password, against the computer. 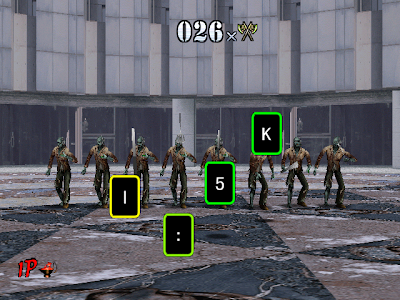 The arcade modes are the same as House of the Dead 2, with the same stages, music, enemies and best of all, the same voice acting. This is great, because personally I believe the voice acting on H/TotD has never been bettered in its relentless comedy awfulness. "Suffer like G did" has earned a certain cachet amongst gamers for a reason, and then there's Goldman, magical, mystical Goldman, sitting in his skyscraper and pondering the permutations of the loyfe coycle. Here, watch this and bask in the glory:

In all seriousness, I wonder what actually went on with the voice acting for House of the Dead 2? Was it a simple case of unpracticed or untalented voice actors working for a Japanese company that didn't realise how strange they sounded? Japanese voice actors struggling with English as a second language? Maybe it was intentional, recorded that way to add to the B-movie vibe. However it came to be, I will go on record as saying House of the Dead 2 (and therefore also TotD) has the best voice acting of any videogame, because it adds so much to the overall experience. Final Fantasy XII may have had a proper voice cast who knew what they were doing, and I'll be damned if I can remember one line of dialogue from that game - but I'll never forget James' incredulous "it's like they're inviting me in!" at the start of the final stage.
Of course, there a few differences between TotD and HotD2, apart from the obvious major one. For starters, our heroes have ditched their guns and opted for this snazzy ensemble: 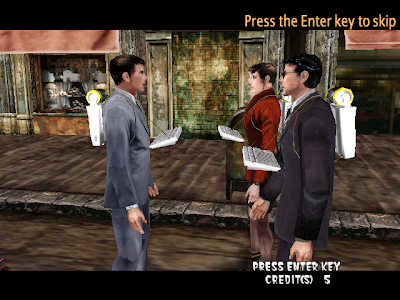 Those are Dreamcasts on their backs (although this is the PC version), powered by oversized batteries on top and with a keyboard hovering at their chests. Well, that's this years Hallowe'en costume sorted, then. It may look absurd and, well, it is. Still, it's no more absurd than a small blue hedgehog who can run around loop-the-loops or an anthropomorphic fox who commands a group of mercenary space pilots, so I'm sure you can suspend your disbelief for now. 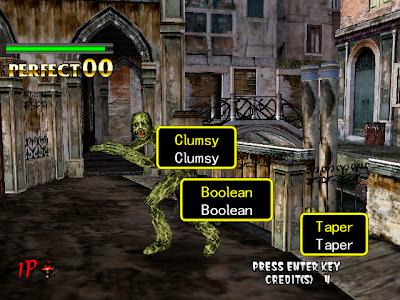 Also, some of the enemies have been given a "comedy" overhaul, which mostly consists of swapping things like axes for squeaky hammers. Yep, nothing takes the edge of being attacked by a bloodthirsty nightmare creature than seeing him attack you with an inflatable he won at the funfair. 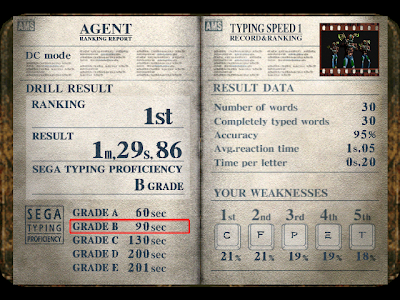 But how does it play, I hear you cry, and to that I respond with I'm getting to that, geez! Well, you win by typing, natch. Zombies lurch onto the screen with words or phrases hovering near them. You type the words correctly (and quickly enough), the zombie dies and your delicate internals remain unchewed. Projectile attacks like knives are deflected by typing one letter, but everything else takes more and more letters to kill as you progress through the game. 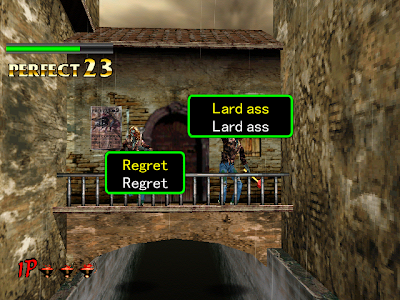 I don't know how it's all supposed to function within the confines of the game word: each successful letter typed is accompanied by a gunshot and visible damage to your foes, so I guess either the keyboard fires bullets or it's attached to sound system that makes "bang!" noises and the zombies just play along. I'm also not sure how the agents know what to type to kill each zombie, but I know what I'm choosing to believe happens: when the zombies appear, they shout out these phrases in their moaning undead voices. Running with this idea vastly improves the game, because then you're imagining zombies jumping out at you and shouting things like "Pickles!" and "Woopitydoo!". However, it does make the game much more difficult, because it's hard to type when you're laughing. 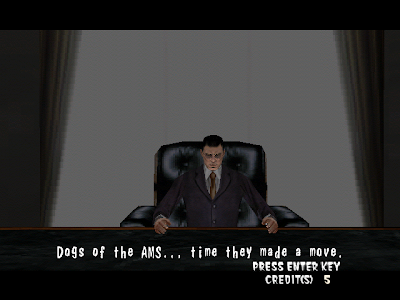 There are occasional changes to the standard typing gameplay: sometimes you'll get a challenge to kill a certain amount of zombies within a time limit, and the bosses generally throw a few extra complications at you. For example, the second stage boss can only be damaged by typing when his armoured chest is opened, while the third stage's boss takes a more relaxed attitude to murder by interspersing his attack with a series of question. Three options come up for each question, and you have to type the correct answer. Sometimes the answer is obvious, sometimes it isn't and occasionally it gives you a gem like this: 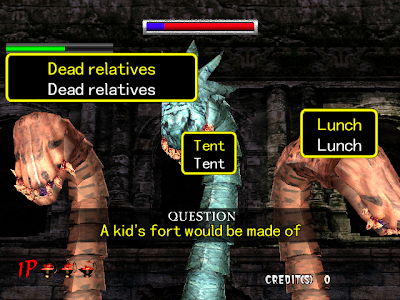 Wow. That brings me nicely to the word selection for TotD, which I would happily describe as weird. I'm convinced that Sega took the strangely amusing atmosphere of HotD2, which may or may not have been intentional, and just ran with it in TotD, creating what could be considered a work of absurdist genius in the process. It's hard to dislike a game that has you typing things like "RoboSnot" and "Why can't you use a toilet?" and when you get to the end and The Emperor starts asking you what Valentine's Day means to you you know you've got something special on you hands.
Speaking of The Emperor, even the three different endings went down the comedy route. This is my favourite:

"See you later, shitlords! Goldman awaaaaay!"
Still, just because TotD is madder than a box of doorknobs doesn't mean you should underestimate it. It's hard, a real challenge if like me you have trouble typing even when you're not being attacked by the undead, and on the harder difficulties I imagine it'd be a challenge for even an experience typist. Or not, I don't know what kind of speeds touch-typists can get up to. Maybe there are hundreds of secretaries with ninja-like typing skills up and down the country, prowling the streets at night and protecting humanity from horrifying beasts with nothing but a laptop and a copy of MS Word. 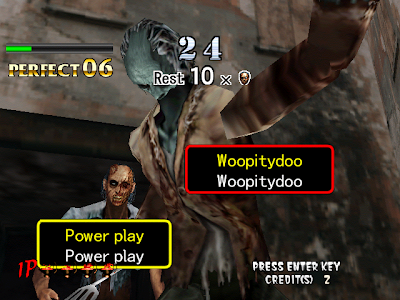 TotD really is a videogame, and it shares a lot of gameplay territory with many arcade titles, things like Gradius, even: it's about reflexes, accuracy and, to a certain extent, muscle memory. It's fun for precisely the same reasons as an action game, too, the sense of battling away while under pressure, the satisfaction of a perfectly executed combo, panicking because you can't find the question mark key. Well, maybe not that last one. 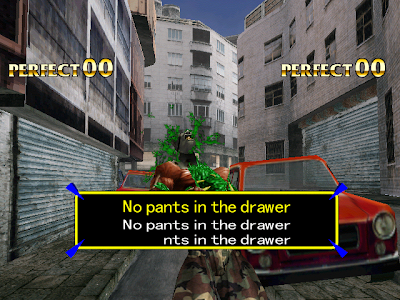 As an educational product, it feels like it would certainly be useful. I haven't spent enough time playing it to have seen any real benefit, but I imagine if you stuck with it it would definitely improve your typing. It succeeds where most "edutainment" titles fail by remembering to include both the "edu" and "tainment" aspects. It's an undeniably fun experience (unless you have carpal tunnel syndrome or something): I keep finding myself firing it up for a quick blast in my idle moments. The fun of the gameplay, the bizarre sense of humour of House of the Dead 2, the excellent music:

It all comes together much better than you'd expect, like a chocolate-covered pretzel, and I highly recommend you give it a whirl. The Dreamcast version is the most well-know, but it's also available for Windows. I'd avoid the arcade version, though: 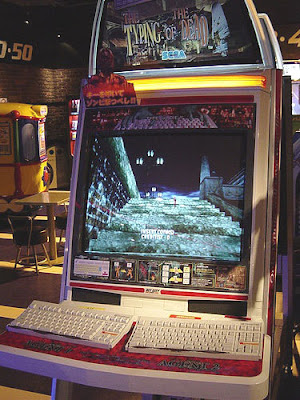 That can't be a comfortable typing position, especially not for a tall person like myself. "What are you doing squatting in my arcade, you weirdo!?" the arcade manager would shout at me. "I'm trying to kill zombies with this keyboard, what does it look like?" I reply. "Oh, great, now he's hit me with a coathanger and killed me. Thanks a lot, dickbag." So yeah, stick with the Windows or Dreamcast versions. 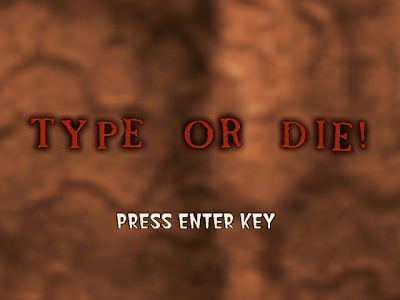 Email ThisBlogThis!Share to TwitterShare to FacebookShare to Pinterest
Labels: Arcade, educational, house of the dead, P.C., sega, typing of the dead