Abadox is a word that fills my mind with many possibilities. Is it a bathroom cleanser? An off-brand painkiller? Of course not, it's a side-scrolling shooter that Natsume made for the NES in 1989. 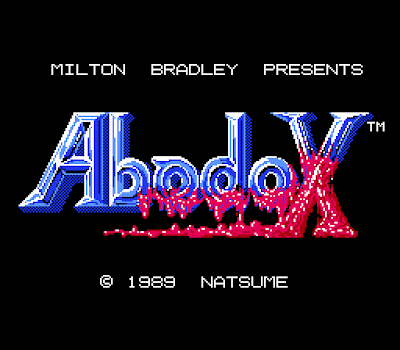 It's full title is Abadox: The Deadly Inner War, a conflict I believe I took part in after eating five Gregg's sausage rolls one hot summer afternoon. It was a war with no winner, I can tell you that much. The story, according to the instruction book at least, is that a space monster called Parasitis eats your home planet of Abadox and then turns into some kind of gooey bio-mechanical horror planet. A planet that looks like a meatball with a goofy mouth. 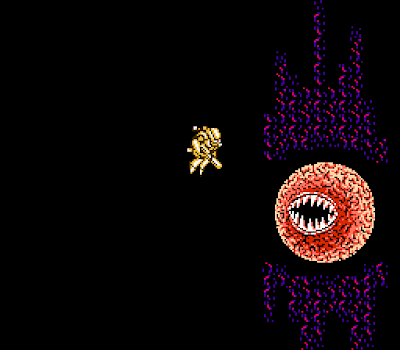 They even managed to work a princess getting kidnapped into the space-battle plot, with is nice. You might think that in the Astro-Year 5012, outmoded ideas like monarchies would have been abolished, but I suppose they have to keep a certain amount of princesses to facilitate all these videogame plots. Maybe they grow princesses in a lab somewhere, specifically bred to be stupid so they are easier to carry off from their lavish Cosmo-Palaces. Anyway, our hero sets off to the planet wearing his little jetpack, and the game begins. 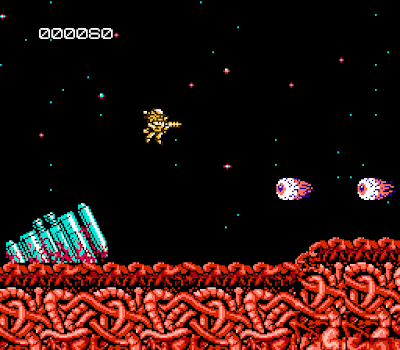 Scroll sideways, shoot, get power-ups, listen to the excellent music:

It's all very standard, except for the gore. Yes, the planet is a writhing mass of sinew and flesh, and the enemies are things like flying, disembodied eyeballs and X-TREME STYLE flaming skulls. Quite what damage a flying eyeball is supposed to do I couldn't tell you; maybe Parisitis is counting on our hero's squeamishness to kick in. Getting splattered by the vitreous humour of a giant alien eyeball would certainly make me think twice about continuing with my current plan of attack. Our hero is undaunted though, and he flies along until he comes to the first boss, which is a rotting skeleton dog thing with an eyeball on its back. 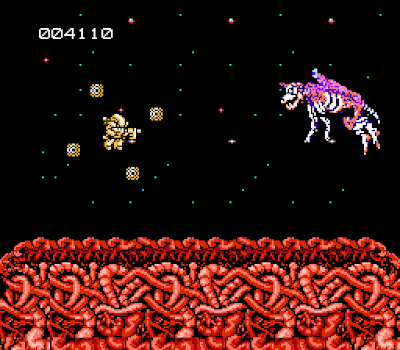 Of course it is. He's easy enough to defeat, and it's into the body of the planet, via the mouth. There are teeth and a squirming tongue, and it's all pretty gross and kinda cool. 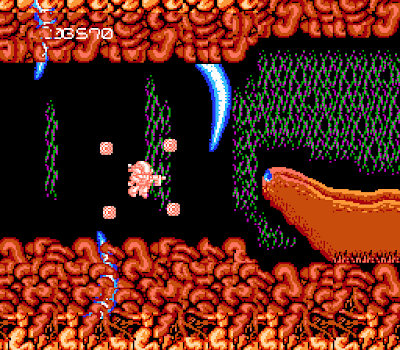 What Parasitis also has is a face on the back of its throat, which is a rubbish place to have a face. You'd get crumbs in your eyes every time you ate a biscuit, and Lord help you if you eat a bag of salt and vinegar crisps. Obviously the eyes are the weak point, so blast away at them and the way is opened to stage two. 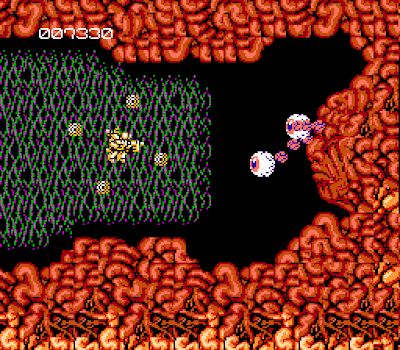 I assume stage two is in the throat, but there are hands reaching out of the walls, so what do I know? It was around this point I realised that this game was very, very pink. Pink everywhere, which is I suppose what you get when you fly into the body of an alien-symbiote-planet-monster-thing. The fact still stands that this game is pinker than Barbie's... dreamhouse.

This level also has a lot of sphincters. Lots and lots of sphincters, all over the walls, firing thankfully-unidentifiable substances at you. There are more sphincters in this game than in, well, anything. There is literally not one thing exisiting on this planet that contains more sphincters than Abadox, and that is something. The boss is a grumpy mouth on the floor. I would be grumpy if I was a mouth and I was that close to so many sphincters. 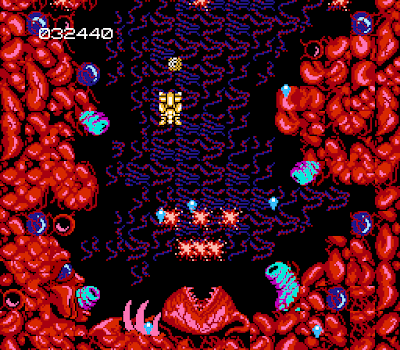 Stage three, and the pink has been temporarily replaced with grey, because we are in the field of nerves and we all know nerves are grey and look like udon noodles. The mid-boss is... it's, well, look, I have no idea. What do you think it is? 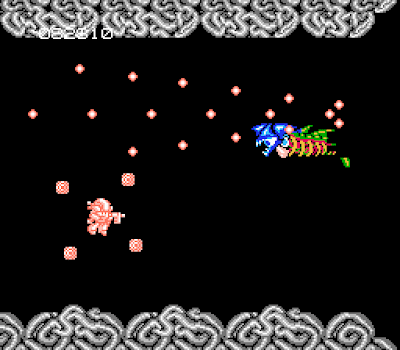 Robot-skeleton-shark-parrot-thing is my best guess.
The comforting grey background doesn't last long, and soon it is replaced with this: 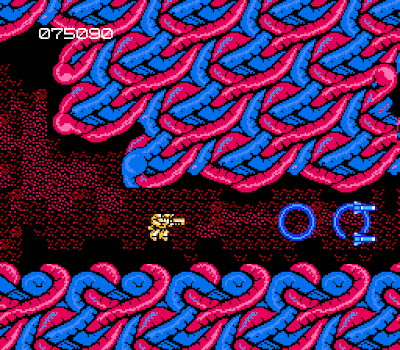 MY EYES. Speaking of eyeseses, the boss is an agressively pink humanoid lump with an eye in its chest. 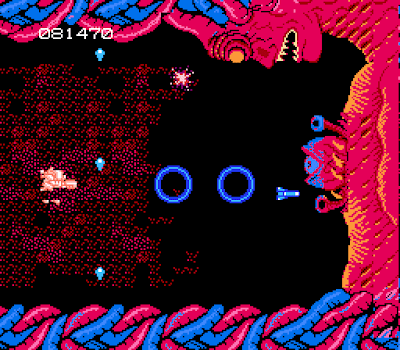 Why does it even need eyes down there? Surely it's too dark to see anything in whatever part of the alien body they're currently in? Anyway, guess where its weak spot is. On to stage four...

...which is kinda bland. You move downwards through the maze of baked-bean-textured walls until you reach the boss, who is long.

He's a wiggly, wobbly intestinal parasite! Yay! He doesn't break from the theme of the game so far, being covered in eyeballs and sphincters as he is. He's probably my favourite thing in the game, and it is at the time of my battle with the Astro-Tapeworm that I must make a confession: this game is too hard for me, and I had to cheat to get past this boss. I don't think it was just me being rubbish, and Abadox is just a damn tough game. Try it out yourself, I get you can't do it eaither. So there. Anyway, with cheats firmly in place the tapeworm isn't a threat and stage five awaits. 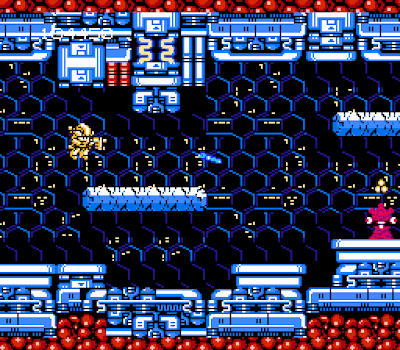 Suddenly, robots! The center of Parasitis is mechanised, you see, and the enemies are now little cyborg blobs. There are laser death-traps everywhere, along with more good music.

If stage four hadn't made me need to cheat, stage five sure as hell would have. When it comes to balls-hard videogames, I used to have a pretty high tolerance for instant death, no passwords and repetition, repetition, repetition. However, I think even my ten-year-old self would have put the Abadox cartridge in the microwave, and then kicked the microwave down the stairs. So god bless cheats, otherwise I would never have known if there is anything in Abadox more entertaining than a giant intestinal parasite (spoiler: there isn't). 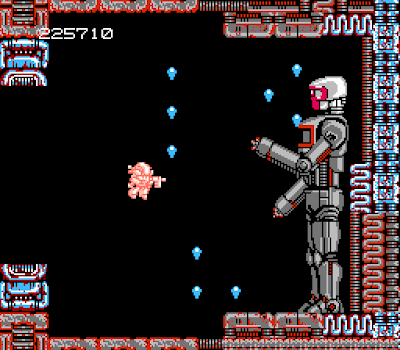 The boss of the mechanised area is the robot pictured above. So now I'm fighting a robot in the robot-filled, robotised innards of an organic-parasite-planet thing. Try and keep track. To be honest, it's a pretty shitty robot, who just kind of stands there and waves his hands about, sort of like C-3PO but even less effective. Soon he's dead and the final stage looms close.

Down, down you travel, through what appears to be a mechanical robot colon, which, given the progression of the levels so far, is understandable. The level remains unflinchingly pink, and you would probably welcome the brown of a colon. The stage itself is a little of everything for before, as well as a few new things like the irritating monsters who stick to your gun and stop you firing. Great. Eventually you reach the final boss, who looks like this: 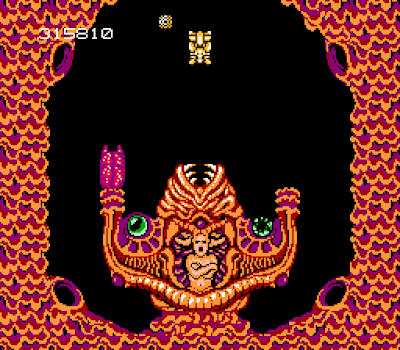 Sphincters, eyeballs, teeth: all the elements are there. I don't know why the right-hand eyeball is broken like that, and it gives the fight a strange lack of symmetry. After all these years of playing games, I have been so condition to aim for the center of boss like this that it took me a while to realise the mouth wasn't the target. All in all, it's a fairly simple fight, and once it's dead, the princess pops out of the center: 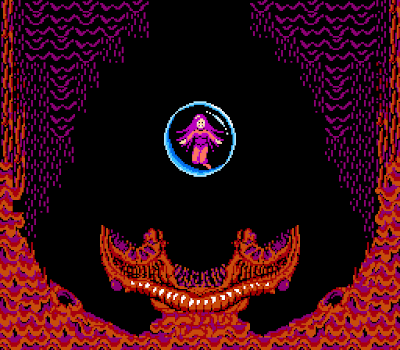 Luckily for her, she doesn't explode due to the sudden decompression. Our hero scoops her up, and there's a brief section where you have to navigate your way out of Parasitis' backside at high speed, and I imagine that if you weren't cheating and you died during this section you would probably tie your arms behind your back and jump face-first out of the nearest window. The credits roll, and that's all she wrote, Abadox is complete.

More like Abadox: The Deadly Inner GORE, am I right? Yes, as a game to play during the Hallowe'en period, Abadox isn't a bad choice. There's plenty of gore and giant tapeworms. Sadly, it's just too godamn hard for me to enjoy it, fnarr fnarr. It's not often you get to fly all the way through an alien planet's digestive tract, but if you really want that experience, I suggest you play Salamander instead, it's much better.
Posted by VGJUNK