Devil's Crush is the bittersweet tale of Satan's unrequited love for a girl he saw on the bus one time... No, I'm sorry, it isn't. I've lied to you, and for that I can only apologise. Devil's Crush is, infact, a 1990 pinball game for the PC Engine / Turbografx by Naxat. 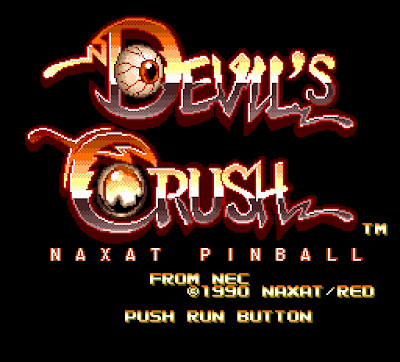 Eyeballs! As always, bloodshot eyeballs signify horror beyond human comprehension, or, in this case, a pinball game with a horror theme. Now, here's a confession for you: I am terrible at pinball. I'm even worse at pinball than I am at side-scrolling shooters, which is saying something. With that in mind, there are almost certainly some parts of Devil's Crush that I missed out on due to my incompetence in handling that silver ball, and I'm sorry. I guess my wrists just aren't supple enough. Still, there's enough her to give you a feel for the game, so onward we go!

Devil's Crush sadly contains only one table, but it's a good one. Here it is in full:

(Click for bigger)
For reference, the whole table is about three screens high, as you can probably tell with the three pairs of flippers and all. As is standard for most console pinball games, you activate the right flipper by pressing one of the buttons and the left by pressing a direction on the d-pad. To me, that feels incredibly odd, not pressing a button to activate something, but then I am a strange man and my opinions should be discounted. The first thing that you may notice after you have taken a look at the table is that the music is completely fantastic and deserves more recognition:

That is some hard-rocking music right there, and perfect for the fast-paced pinballing madness that's taking place in what appears to be a Satanic castle full of demons and such. It's a good job too, because it's the only music you'll be hearing during the vast majority of the game. That's the music sorted, so let's take a look at the denizens of the Devil's Crush castle. 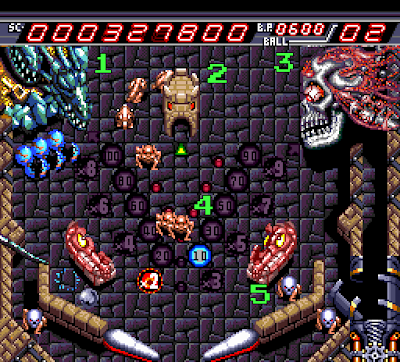 1) A grinning dragon, who keeps on grinning even when you have crushed his/her eggs into a sticky mess beneath the cold steel of your ball. Truly, this is dragon's cheerfulness is an inspiration to us all.
2) The world's angriest turret. Shooting you ball into his mouth a) sound filthy and b) gives you a blocker between your flippers. Thanks, angry turret!
3) A boggly-eyed skull (also grinning) who is sporting a rather fetching head-dress made from some sort of translucent flesh. His eyes follow your ball around, and if you lose a ball he cackles at you demonically. You wouldn't want him as a spectator at your golf match, that's for sure. I don't know why he's laughing, he'd be rubbish at pinball. He doesn't even have any hands, and even if he did he lacks the musculature required to curl them!
4) Little four-legged skull spiders. They're an easy point-scoring target.
5) The same as no. 4, but with a helmet that has either a wide mouth or a Hitler moustache on it. I'm going for the Nazi 'stache myself.

Smack bang in the middle of the table is a shadowy face. Bash it a few times and... 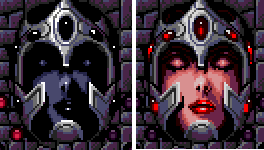 ...a pretty lady is revealed. How delightful. I'm sure that, as a disembodied face in the middle of a Hell-themed pinball table, she will be nothing but kittens and rainbows. So, I hit a few more times.

Oh dear. She's developed wild, staring eyes and either fangs or a very pronounced overbite. Well, I'm sure it's just the shock of being a disembodied face in the middle of a Hell-themed pinball table. Hit her a few more time? Sure, why not. I'm sure she not...

Ah. Fully a snake-demon now, huh? Well, I hope me repeatedly slamming my metal pinball against your face did not contribute too much. She's nearly as cheerful-lookin' as the dragon, so I guess a life lived as a buffer in Satan's own pinball table is a good one. She's got a couple of of little friends around her, too: 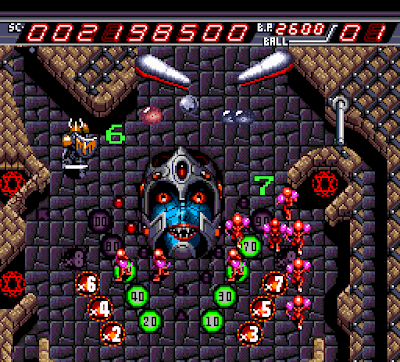 6) Skeletal Knights who line up, only to find that their shields are no match for a flipper-propelled steel ball.
7) Skeleton, sir, thousands of 'em. No data can be gathered on the skeletons' cheerfulness level, but it's pretty safe to assume that they're as happy as you can be without any skin.

As well as the main table, there are also a few bonus games to take part in, if you can find them. They're mostly accessed by getting you ball into something's mouth, such as the lizard-lady when she's in full snake-freakout mode. 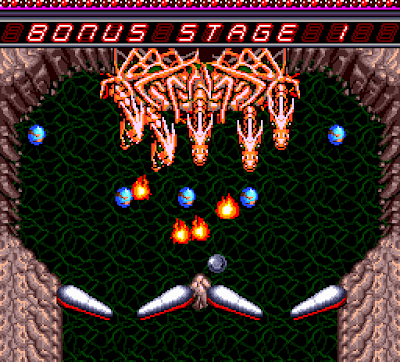 There's a hydra-fighting stage, although I don't remember the hydra being known for having a spider-like body. I guess when you have a vast swarm of snake/dragon heads that regrown when severed, that's always going to be the thing that people remember you for. 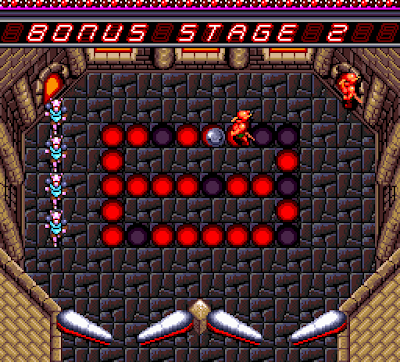 This one is a little irritating: small demons pour into, and you have to destroy them while they're standing on an unlit light to light it. Light 'em all, get a big bonus. Sadly, they don't like standing in place, and when you've only got one light left to light, it's more frustrating than fun. 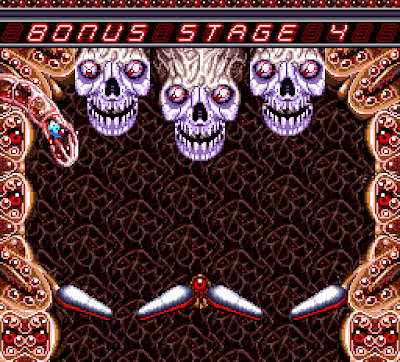 Obviously I missed at least one bonus stage, because that clearly says "Bonus Stage 4" at the top. Hmm. This must be the best one, though, because it features even more giant, happy skulls with bloodshot eyes that follow you around the room. That is what is best in life, Conan. I like the fleshy, cell-like walls, which certainly give the whole scene a strange sense of scale. 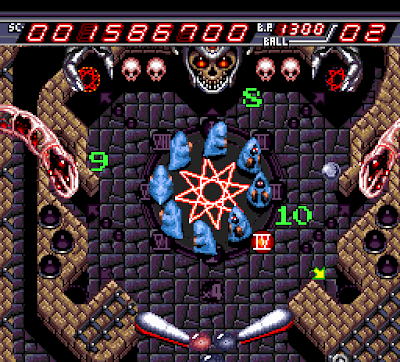 The top screen is probably the place that you will see least of, at least if you are as rubbish as me. It's got its own set of monstrous denizens:
8) This game's theme is skulls. Skulls skulls skulls, with more sunken eyes and gleaming cheekbones than a Victoria Beckham lookalike parade. At least this one gets some hands.
9) A wonderfully disgusting multi-eyed sphincter/tentacle/phallus thing that deposits your ball back onto the table after a bonus game.
10) Monks who are performing some kind of ritual, no doubt a dark sacrifice to the Steelballus, God of Pinball. Or a demonic conga.

And that's Devil's Crush (or Devil Crash if you're from Japan), pretty much. Apparently, you can complete the game, but I have no idea how and even if I did, I probably wouldn't be able to do it. I really like Devil's Crush. I probably would have been quite so keen if I had paid full price for it when it was first released and I only had one table to play, but if you fancy a quick game of pinball and you're the kind of mud-eating peasant who doesn't have a room full of pinball machines, you could do a lot worse. The ball physics are about as good as they could be considering it's twenty years old, everything is cheerful and there's that music. If you've got a Wii, you can even buy it on the Virtual Console. If you don't like pinball, then obviously, don't bother! play Tetris instead. Everyone loves Tetris.
Posted by VGJUNK