Today, I'll be discussing one of my all-time favourite videogames: Monolith's 1997 FPS Blood. 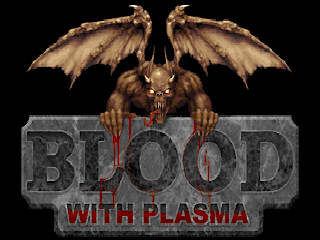 Ah, Blood, one of the many warping influences on my juvenile brain that lead me to become the pillar of the community that I am today. Did you ever play Duke Nukem 3D? If you did, this'll be easy for you, because Blood is Duke Nukem 3D but better. They are both first-person shooters built using the BUILD engine, a sort of 2-and-a-half-D game engine that gives the appearance of a 3D space with some restrictions, most notably the lack of a proper height component: for example, you can't have a room on top of another room using the BUILD engine. Otherwise, Blood is pretty much the same as most other FPSs, especially those from around the same time. Run around the level, shoot enemies, find items and ammo and keys, solve the ocassional puzzle, reach the end of the stage. So why is Blood any better than its peers? Well, there're a few reasons. 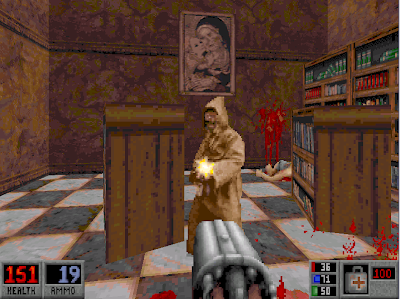 First off, Blood eschews the normal sci-fi approach of Doom and the rest, instead going for the storyline and overall atmosphere of a 1980's horror movie. As you can probably tell by the fact I'm having a whole month's worth of Hallowe'en on this blog, I am a huge fan of all things horror-related, so when Blood came onto my radar when I was about thirteen, my eyes probably flew out of their sockets like a cartoon wolf's after he's just seen a foxy nurse. You play as Caleb, a red-glowing-eyes type in a fetching black duster and fedora ensemble who is one of the the four Chosen Ones of a cult called The Cabal. Short story even shorter, the dark god of the Cabal decides he wants Caleb dead, Caleb doesn't like this idea and sets off to kill the dark god Tchernobog. Bam, story in place. Now for the blood! 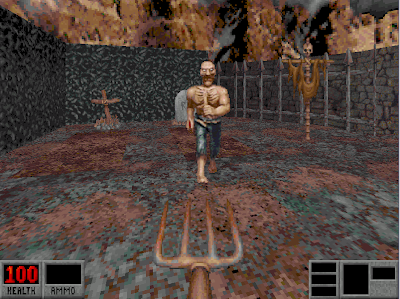 Yes, Blood lives up to its name, with gouts of the red stuff flying from the corpses of your enemies, dead bodies nailed to the walls and zombie heads that can be kicked around for your amusement. This was a time of media panic about violence in videogames - with other PC games like DN3D and Carmageddon taking a lot of flak, Blood seemed guaranteed to cause both outrage and interest. Luckily, it's lower profile when compared to those other titles seemed to spare it from too much controversy. So, violence: but what can you cause violence with, and to whom? 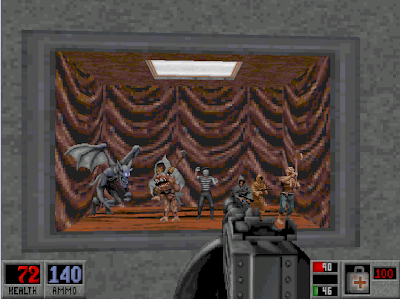 Two things that I love about Blood are its weapons and its enemies. You start with nothing but a pitchfork, which functions as Doom's chainsaw or Duke's Mighty Boot, but you quicky progress to flareguns that set the enemy alight, Tommyguns and bundles of dynamite that cause Caleb to cackle wildly when you cause enough carnage with them. Later on you find some more exotic death-dealing devices, such as voodoo dolls (just point and stab!), aerosol-can flamethrowers and crazy-ass shaman sticks that drain the life out of your opponents. Blood was also one of the first games to feature alt-fire modes on its weapons. My favourite alt-fire mode? Probably the Tommygun, where pressing alt-fire just makes you wave the gun around wildly while spewing hot lead-based death everywhere. That sounded kinda disgusting, didn't it? And speaking of disgusting, you need something to fire these weapons at - and Blood doesn't disappoint in that regard. 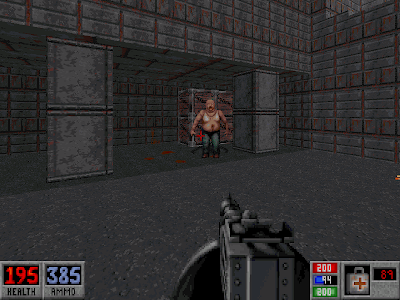 Zombies - with axes, no less - are the first thing you fight, and they generally keep getting up until you knock their head off. There are flaming hell-hounds, gargoyles, shark-men, fat zombies who look like kebab shop owners and scythe-wielding spectres who emit such a brain-melting scream when you encounter them that you'll go all-out with your best gun to make sure they're dead (un-undead?) as fast as possible. Seriously, it's such a nerve-jangling wail of misery that I can't help but wonder if they recorded a man having his testicles placed in a mousetrap to capture it. However, the enemies that you'll be fighting most often are one/some of my favourite enemies of all time: Cultists!

Disfigured monks with Tommyguns are cool enough, but these guys have an ace up their voluminous sleeves: they have their own language. Yes, Monolith gave them their own vocabulary, and they aren't afraid to shout it out loud when you're fighting them. If you read VGJUNK regularly, you'll know what a sucker I am for old-school videogame speech, and this is some of my very favourite. Here's a video of some of the monks' favourite phrases:

Shouting "Maramas in fear books!" was a fairly significant portion of my childhood, as you can probably imagine. The best bit? Shooting them with a flare while they're speaking, so that they suddenly drop their cultist language and run aroung screaming "IT BURNS!". Genius.

Even better than its enemies and weapons, Blood has one thing that pushes it right to the top of my list: references to other things. The whole of the game is a paean to horror movies, and that's where most of the references come from, although there are plenty of others. For example, in the first level alone, there are references to Army of Darkness, Macbeth, Phantasm, The Crow and Return of the Living Dead. When I was a kid, I felt like I was the only person in the world who had seen Evil Dead 2, so when I came across some severed hands that chase you around shouting "I'll swallow your soul!" that was it, Blood had proven its greatness to me. There are even whole levels devoted to certain movies, including the "Overlooked Hotel", complete with a frozen maniac in the hedge maze, a level called "Mall of the Dead" which I think you can figure out the genesis of, and even a level called "Crystal Lake", home to everyone's favourite slasher film icon: 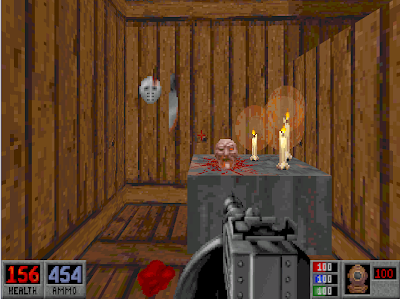 The music even contains the famous "ki ki ki, ma ma ma" effect. What's that? You prefer a different slasher icon? Well, how about this one? 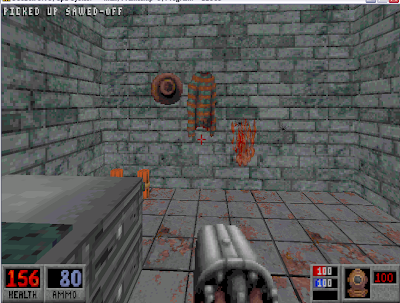 See, Blood has you covered. In blood, presumably. It's not just films, either: the King of cosmic horror himself, H. P. Lovecraft, gets a few nods: 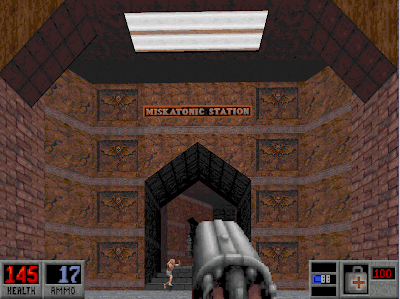 As does Edgar Allan Poe. 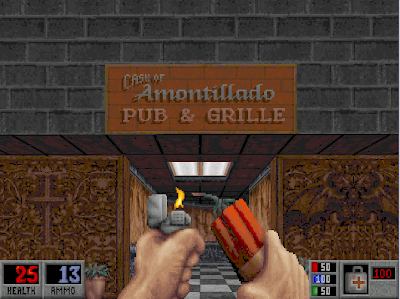 For the love of god, Monolith! A large part of the fun of Blood is hunting down these secrets, but in case you're lazy or have no hands or something, here's a video of some of them (it might be a good idea to click through to Youtube to watch).

There is one last thing that sets Blood apart from its rivals. You see, it contains mimes.

There are mimes. You have a pitchfork. You can stab a mime... with a pitchfork! You can find these... men, cursed souls who practise the least entertaining form of entertainment known to man, and put them out of their misery. You may be trapped in an invisible box, sonny, but it won't protect you from four steel prongs of pain.

Of course, Blood has its flaws: after all, it was released 13 years ago. If you're the kind of person who really cares about graphics you'll probably struggle with it, and the terrible mouselook is a problem. Also, the enemy AI is poor to the point of retardation, especially when the spectres just end up rotating ever higher into the air, screaming their terrifying screams until you manage to get their attention so you can kill them and shut them the hell up. But these are all minor flaws, and it's still as fun to play now as it was when I was a kid. It's a nice change from things like Halo at any rate, and it makes me wish more modern FPSs would concentrate on the single-player mode. If this has made you want to play Blood, then you can get it at GoodOldGames for a mere $5.99 (less than £4!), including both the expansion packs and DOSBox so you can play it on something that isn't older than Bruce Forsyth. It's a great deal and I recommend you go and buy it right now!
Well, that's Blood. Long shall it remain one of my favourites. Until next time - crudux cruo!
Posted by VGJUNK