IT'S A KNOCKOUT (ZX SPECTRUM)

It’s been a while since I covered a really terrible game, and my extremely low self-esteem will not allow me to go a moment longer without subjecting myself to some bloody ‘orrible home computer game from the eighties. Where else could I turn, then, but to the ZX Spectrum? That’s a library full of games that’ll make you wish you lost your hands in a terrible combine harvester accident, and here’s one of them – it’s Ocean Software’s 1986 I-blame-Charles-de-Gaulle-em-up It’s A Knockout! 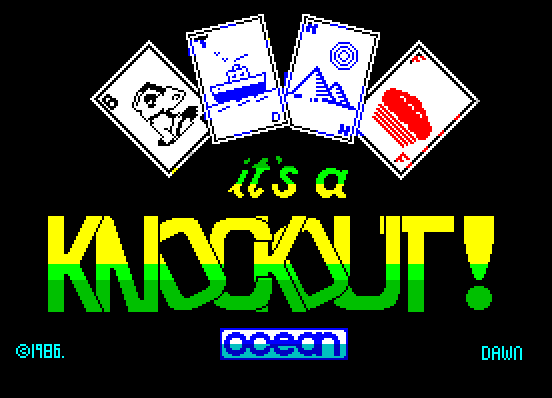 What do we have here, then? A logo, and some playing cards with pictures on them. The pictures are of something you might mistake for a camel if you’ve never seen a camel, a ship, the pyramids being menaced by a boss from Xevious and the world’s crappiest lightbulb. That doesn’t tell us much about what gameplay we’re going to get, does it? Well, it might help to know that It’s A Knockout is based on the gameshow of the same name that was broadcast on the BBC from the sixties through the eighties. Teams competed in “wacky” games while wearing oversized costumes and falling over a lot thanks to spinning floors and large amounts of water. Imagine if the mascots from a Disney park got hammered and gatecrashed a school sports day and you’ve got a good idea of how It’s A Knockout worked. 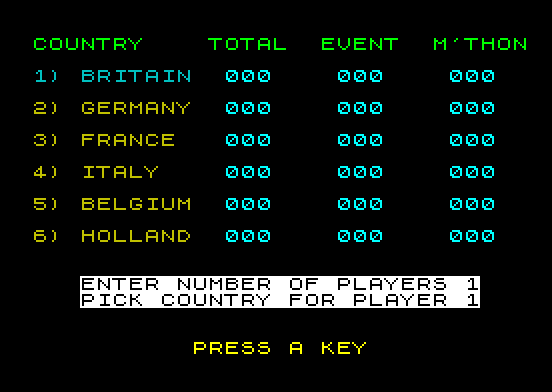 The British version of It’s a Knockout involved towns and villages competing against each other, but before that there was Jeux Sans Frontieres – basically the same thing, but with representatives from different European countries battling it out. That seems to be what this version of It’s A Knockout is based on, given that you have to choose a country to play as. I have trouble believing this, but I’ve seen it cited in several different places so get this – supposedly the idea of Jeux Sans Frontieres was the brainchild of French Resistance leader and later President of France Charles de Gaulle. You know, one of the most important figures in the history of 20th-century Europe. Apparently it was intended to promote friendly relations between French and Germany after the war. Makes sense to me, it’s difficult to engage in a land war when you’re all dressed in novelty penguin costumes.
With my country selected, I suppose I’d better get to the first event, because of course this is a collection of minigames. 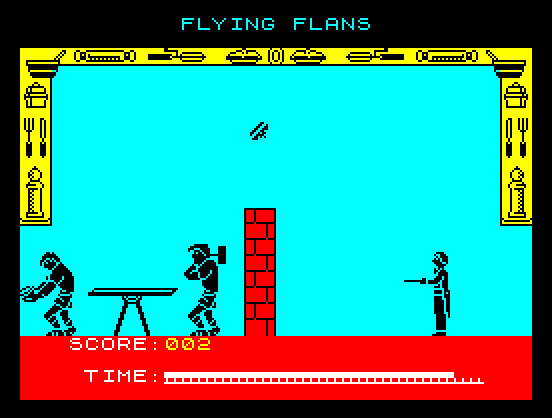 Here we go with Flying Flans, the pasty-based aerial bombardment game beloved by kids of all ages. One large man places a flan on the end of the see-saw. The other large man then hits the see-saw with a hammer, sending the pie arcing over the dividing wall towards you, the hapless butler. The goal is to position yourself so that the flan lands on your tray, and then you can deposit the flan at the right-hand side of the screen to score a point. That’s about it, really. You can only move left or right, the flans are flung along a variety of different angles and the controls are so loose that the only way to score any points is scuttle over to the flans’ vague landing area and hope they drop onto your tray. You can at least turn quickly on the spot, which doubles the potential area for a safe flan landing, but it’s still a struggle to get your waiter in place. 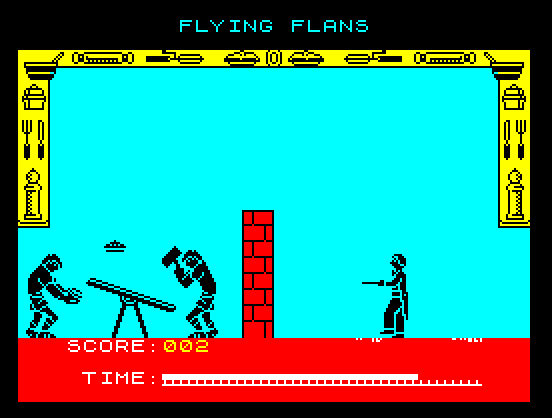 The only other thing of note is that any missed pies land on the floor and leave a slippery mess behind, making it even more difficult to position yourself correctly as you slide across the cream-drenched floor. Mental note, never use the phrase “cream-drenched” ever again. So, as the minigame goes on you’ve got less and less control over your character and by the end it feels like you have no control at all. This all goes on for roughly four thousand hours, until the timer eventually runs down and you’re thrust into the next circle of hell. 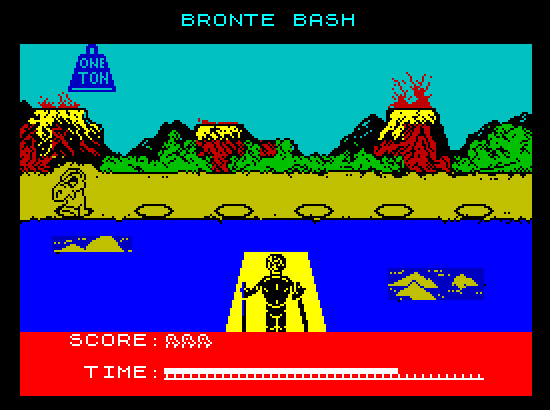 Next up is the Bronte Bash. You can imagine how my heart broke to realise that the Bronte Bash isn’t a triple-tag-team bout against Anne, Charlotte and Emily. I had visions of being defeated by Charlotte’s signature move, an excruciating leg-lock she calls Pain Eyre, but such wonders were not meant to be and instead we’re left with… this. The “bronte” on the title presumably refers to the brontosaurus – although why it isn’t called “Bronto Bash” I’ll never know – and it’s whack-a-mole. A dinosaur pops out of one of the six hole, and you use the joystick to position the one-ton weight over its head. Press fire, drop the weight, bash the bronto, score a point. This is probably the best of It’s A Knockout’s games purely because the controls seem to work correctly and you can actually tell what you’re supposed to be doing, but it still isn’t any fun. The fact that all the sprites in this game have the all-black look of an LCD handheld feels very appropriate, because that’s the closest kid of gameplay I can think of to It’s A Knockout. 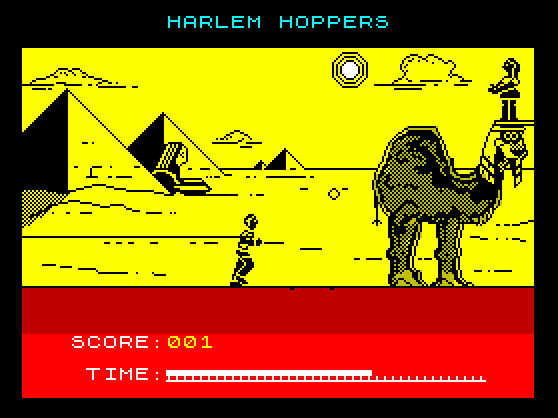 Game number three is Harlem Hoppers, which is of course a reference to the famous Harlem district of Cairo. Not really, I imagine it’s supposed to invoke the Harlem Globetrotters because this is tangentially basketball-related. The vaguely pharaoh-like person on the right rolls a ball down the camel’s back. I say camel, that’s definitely not the face of a camel. It looks more like Goofy wearing a Rick James wig. None of this looks anything like what it’s supposed to look like, with the exception of the pyramids.
Anyway, the ball rolls down the camel’s back, flicks into the air at a random angle and you have to move left or right to catch it. Yep, it’s the same as Flying Flans, with one difference: your character is attached to a bungee cord so you’re constantly being dragged back towards the left of the screen. I can scarcely believe it, but the developers must be recognised for achieving the impossible and making the flan game less fun to play. 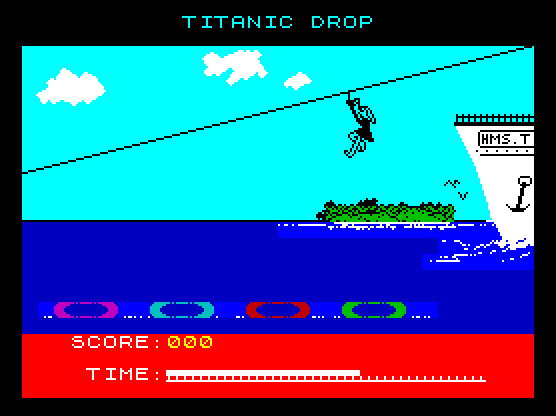 Onwards to Titanic Drop, a tasteless recreation of one of history’s worst maritime disasters / another rubbish minigame. People slide along the zipwire, and you press the fire button to have them let go and hopefully land in the life rings bobbing about on the water’s surface. 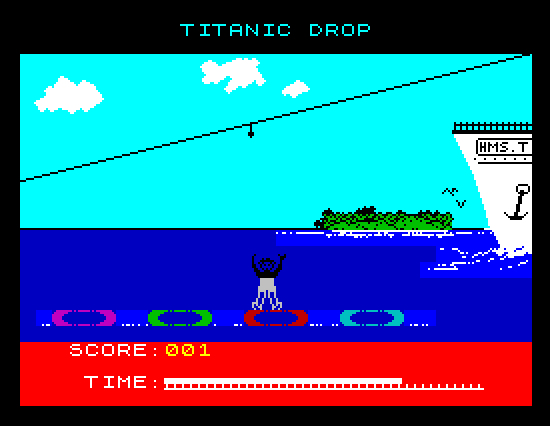 This game’s only saving grace is that you have to take the peoples’ momentum into account when you drop them, which at least gives you something to think about. Plus you get a little sprite of them looking absolutely horrified, which provides a nice bit of camaraderie with the player. Other than that, this game is ruined by the awful hit detection that often sees you scoring nul points even when you drop someone right through the ring. The rings are constantly changing colour, so perhaps that’s got something to do with it – maybe you’re supposed to be dropping them into a certain colour of ring, but I played this game multiple times and I sure as hell couldn’t figure it out. 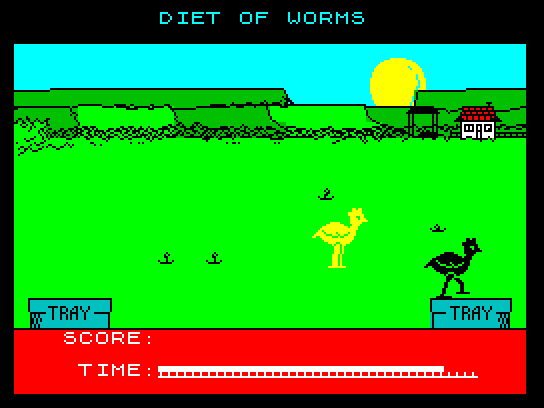 Here we see that absolute high point of It’s A Knockout. Not the minigame itself, which is shit, but that fact that it’s called Diet of Worms. This is a truly fantastic pun that marries the fact that you’re playing as a bird eating worms and also the other Diet of Worms: the imperial diet of the Holy Roman Empire held in 1521 that was called in part to denounce the protestant reformation of Martin Luther. That is the kind of next-level punning that I can only aspire to. 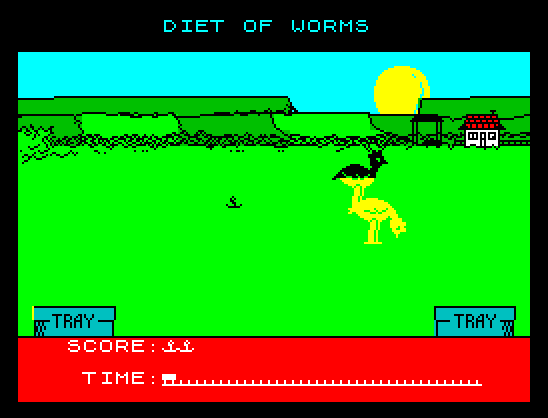 Sadly the minigame has nothing to do with papal responses to threats to the church’s power. Instead you control an emu that has to pick up worms and drop them in the tray at the bottom of the screen. Sounds simple enough, but unlike the other minigames where the controls were merely bad – too sticky, too floaty, too fussy – in Diet of Worms I had no idea what I was doing to make the emu move. You’d think it’d be as simple as up, down, left and right with fire to peck at the worms, but half the time the bird was wandering around aimlessly no matter how I tried to wrangle it into position. I think there might be a specific button on the keyboard that makes the emu head towards the tray, but I couldn’t tell you what that button is. As a result, I never managed to pick up more than two or three worms and my emu staggered across the field with the rubbery gait of a drunken farmer, making me the emu-based embarrassment of Europe. Finally, there’s an obstacle race. The obstacles in question are walls, water-filled ditches and what look in the screenshots like holes in the floor. They’re not, they’re bouncing balls. The obstacle race seemingly exists solely to fulfil the mandatory joystick-waggling quota that all home computer multi-event games were beholden to. Waggle left and right to get your character moving, press fire to have them jump over obstacles. Except the balls, which you can’t jump over. Or avoid at all, as far as I could see. If they’re at just the right position when you reach them, sometimes you’ll run straight through them – but nine times out of ten they’re impossible to dodge. At first I thought this was just me being crap at the game, but the bottom half of the screen shows your computer-controlled opponent and they also couldn’t avoid the balls. 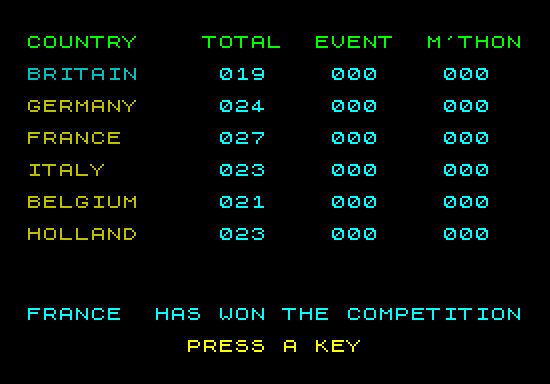 All the events are complete, and I have come rock-bottom of the scoreboard. I know it looks like I’m at the top, but you can see I scored the lowest total points. The fact that the creators of this game didn’t or couldn’t program in a way of displaying the countries in order of their scores seems like a perfect encapsulation of It’s A Knockout’s level of ambition – a low level it doesn’t even manage to reach. Perhaps the Commodore 64 or Amstrad versions are more palatable; they certainly look a lot better, and I can’t imagine they play any worse. This is just a terrible product from top to bottom. You’re constantly fighting against the controls, (if you can even figure them out,) the games themselves have all the depth of a gnat’s thimble and the graphics are somehow outperformed by a Game & Watch. At least the title’s accurate: playing It’s A Knockout has roughly the same effect as huffing a chloroform-soaked rag.