It's time once again for an Ephemera article, where instead of taking an in-depth look at one game I use the laser-like focus of my mind to pick out five tiny videogaming moments for dissection. Maybe I should be hyping these articles up more, giving them jazzier titles and more dynamic descriptions. Five Mind-Blowing Game Moments That You Won't Believe (Unless You Do), maybe? Hmm, no, I don't think so. Right then, what do we have this time?


The Whole World Smiles With You

The Bitmap Brothers' 1993 Amiga game The Chaos Engine is a dark, grim shooter set in an alternate Victorian era where a Charles Babbage analogue has created an evil sentient computer that's destroying the land and mutating man and beast alike. It doesn't sound like a place for men with cheery hearts and chipper attitudes, but apparently no one told this to the Mercenary character. 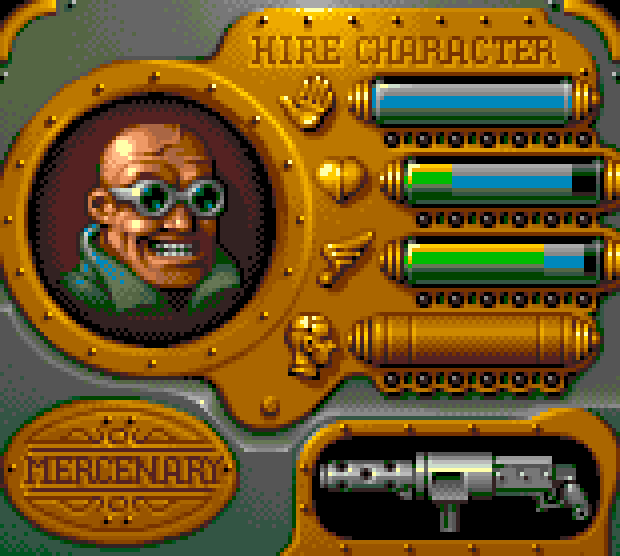 Just look at that beaming smile! He is a man fair resplendent with warm feelings and a deep love for all the people of the world. He wants to be your friend, he wants to be everyone's friend. It's nice to see a man with such a positive outlook on life. His good humour will be much needed on this long and arduous journey. 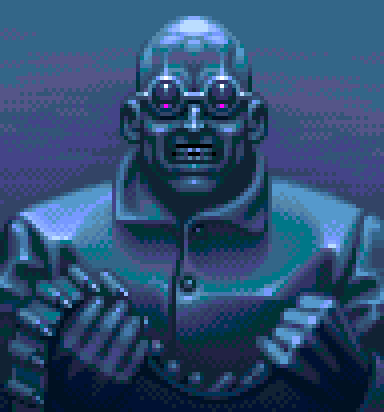 Okay, so in his profile picture his smile looks more like a grimace. That's understandable. Not even the Mercenary can be happy all the time, not when they're doing battle with the twisted forces of the Chaos Engine. 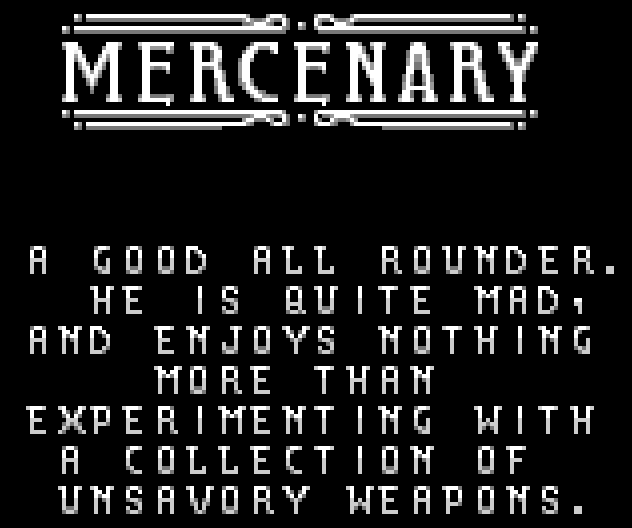 Oh. He's a complete psychopath. Well, there's nothing that says a psychopath can't be cheerful, I suppose.

My very favourite Megadrive game now, with Shining Force II and its books. There are a bunch of bookcases dotted around the game, and each one shows you the title of a book when examined. Viva, Friendship indeed. Shining Force II lets you make friends with a werewolf, a robot and a vampire called Mr. Lemon. Friendship in Shining Force II is a wonderful thing. There are sensible books, like Attitude of Soldiers, and there are less serious ones like the Sega Guide. There's one called An Old Goat, which the main character thinks might be about his Gandalf-type wizard mentor Sir Astral, the ungrateful little sod. My favourite, however, is this serious tome.

Ah yes, Study of Yogurt, that famous seven-volume treatise on all things created from fermented milk. An indispensable grimoire for any sorcerer, be they searching for battle tactics to use against the Fromage Frais Tribe from beyond the Dairy Mountains or just looking for a good raita recipe.

I checked out the Japanese version to see if there was anything else to the Study of Yogurt, but as far as I can tell the message just reads "a book named Study of Yogurt". I think that's for the best, though - the wonder of the Study of Yogurt is in its brevity, giving your mind free reign to imagine just what resides in its hallowed pages.


The Voice of Nigeria

You know what's a horrible feeling? When you work for ages on a long and tiring project but eventually finish it, only to realise as you're getting it ready for the final delivery that you forgot something. A small piece, something that isn't vital to the overall success of your project but a niggling annoyance none-the-less. I can only assume that the Konami staff who worked on PS1 football game International Superstar Soccer Pro know this feeling all too well, considering that they forgot record the commentator saying the word "Nigeria".

That is a completely different person saying "Nigeria". You'd think the sound department would have just gone down a big checklist of all the countries in the game, ticking them off as they were recorded, but then this is a game where the commentator sometimes shouts "SCORCHIO!" when you take a shot so I don't think getting the English speech right was Konami's top priority.


As Graceful as a Bison

Street Fighter EX is the black sheep of the Street Fighter series, (and Street Fighter The Movie is the deformed offspring chained up in the attic,) and as such it's got some strange moments, none more so than the various CG character endings. Zangief cossack dances his way around the world. Guile rides a plane - you might think that makes sense, given that he's in the Air Force, but he literally rides a jet fighter by standing on top of it while it's flying. 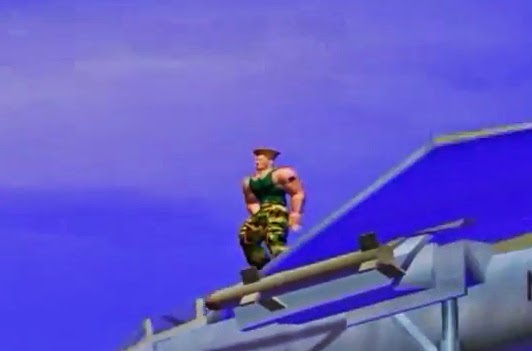 How Guile passed his training is anyone's guess. The Air Force generally frowns on its pilots not being inside the plane as it soars through the air.
But what of fearsome villain and Shadaloo dictator M. Bison? Surely he has a sensible ending that shows off his menacing Psycho Power and lust for conquest?

No, he does not. Your reward for completing the game as Bison is getting to see him perform a gymnastic floor routine. I know I've said before that if you can perform flying ninja kicks or endless cartwheels then you should use them to travel everywhere, but there are exceptions, like if you're the feared head of an international crime syndicate. A little decorum, if you please. We don't need to see you practising for the 2016 Rio Olympics.

Mega Man 3 probably defines my early childhood more than anything else. I played that game incessantly for years, being terrible at it for most of that time... but it taught me to think about how I tackled a hard videogame. I played a lot of Super Mario, too, but in the Mario games it's always obvious how a situation needs to be tackled. Not so in Mega Man 3, and in the time before internet FAQs and video walkthroughs I derived great pleasure from figuring things out. 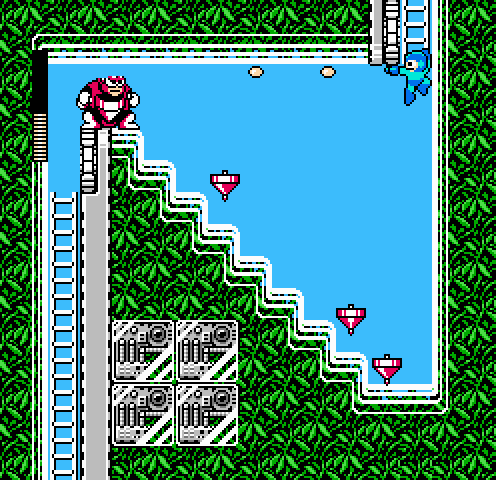 For example, here in Top Man's stage I eventually realised you can shoot this enemy by hanging from the bottom of the ladder, removing the need to drop down onto the staircase where I'd be at the mercy of the deadly... spinning tops? Really? C'mon, Capcom, why is Mega Man even allowed to fight killer robots if he can't handle spinning tops? Anyway, I digress. 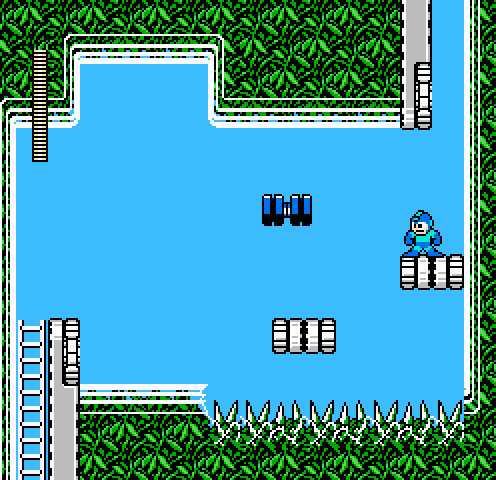 Of these little tricks, the one I always remember best is the situation pictured above, also found in Top Man's stage. Platforms hovering over instant-death thorns, with a flying enemy to throw you to your doom via Mega Man's greatest vulnerability - knockback. How can you make your way through this gauntlet of terror with no risk to Mega Man's alarming fragile body?

The answer is simple: just run. Running straight off the platforms without jumping might seem like it'll result in an immediate Mega-explosion, but you have just enough momentum to land safely on the platform below, allowing you to completely bypass the enemy above and clear the screen unscathed, just by holding left on the d-pad. Well, until you have to jump up for the ladder at the bottom, but even a Mega Man player as bad as I can manage that.
I've never forgotten this, even after gaps of many years between Mega Man 3 playthroughs. I'm sure it might not seem like much to you now, and if you're really good at Mega Man games then you have my respect and jealousy, but figuring tricks like these out as a kid was as joyous as any other part of videogaming. Now, if only I could learn to reliably negotiate those platforming sections with the disappearing blocks, I'd be golden.


Recently on VGJUNK:
Fuzzy-headed children's guff in Tweenies: Doodles' Bones!
Wacky darts in, erm, Wacky Darts!
No broken spines but a lot of Hildroids in Spinal Breakers!
Posted by VGJUNK