Recently, I embarked on another playthrough of Final Fantasy VI - that's Final Fantasy III if you played it as an American child, or Final Fantasy: A Psychotic Clown Has Tantrums, Destroys Everything if you're after a condensed synopsis of what happens in the game. Oh hey, that's probably a spoiler. This article will have other spoilers in it, so if you haven't played Final Fantasy VI yet then you really should get on that. Anyway, I wanted to write about FF6 but it's far too grand for me to give it the usual VGJunk treatment - Final Fantasy XVI would probably out by the time I finished - so instead, here are five glittering facets on the boulder-sized diamond that is Squaresoft's 16 bit masterpiece.

Let's start with something from, appropriately enough, the start of the game. At the beginning of Final Fantasy VI, brainwashed Imperial slave and regulation-issue Chosen One Terra is on a mission to recover a mythical god-beast that has been found frozen in ice (sadly it's not Captain America). She is accompanied by two soldiers named Biggs (Vicks in the first English translation) and Wedge, names that would become something of a running joke in later Final Fantasy games. They find the frozen esper, only for it to react to Terra's magical powers, an event that doesn't work out well for poor old Biggs and Wedge.

I'm five minutes into the game, and already there's a mystery here that I've spent far too long thinking about over the years: just what exactly happens to Biggs and Wedge? They're never seen again, so the obvious conclusion is that they're killed by the esper... but this is a Final Fantasy game, and if I don't see numbers popping out of someone then I have a hard time believing that they've been physically hurt. There's no bodies, either, so if the esper did kill them, it did so in a way that completely excised them from reality. That's pretty hardcore. I know they work for the evil empire and everything, but complete erasure from the universe seems a bit much and is almost certainly a human rights violation.
The other option, and this is the one I've always favoured, is that the esper is teleporting them somewhere, just to get them out of the way. It is with a not-insubstantial amount of shame that I admit I wrote some fanfiction about this very scenario many years ago. I was young, okay? And also a dork. A young, foolish dork.

One of the advantages of Final Fantasy VI's move away from the pure "fantasy" tropes of the earlier games in the series towards a more technologically advanced setting is that you get to see the king of a small nation using a chainsaw to attack a doberman.

You don't get that in your Tolkien knock-offs. The best part about this is that sometimes he puts on a hockey mask as an homage to Jason Voorhees, star of the Friday the 13th movies. Well, maybe not so much Jason himself - despite killing people with an impressive variety of implements ranging from guitars to the vacuum of space to his trademark machete, Jason has never used a chainsaw - but to slasher movies in general.

Someone at Squaresoft must have thoroughly enjoyed this concept, because it made a reappearance as one of Vincent's Limit Breaks in Final Fantasy VII. I prefer the FF6 version, though, because Vincent is a walking science experiment with gothic tendencies from whom you would expect this kind of behaviour. FF6's Edgar is, as mentioned, a king. A king who has a hockey mask on hand just in case he's called upon to dismember something with a chainsaw.

After a series of convoluted but extremely enjoyable events including participating in an opera in the hopes of being kidnapped and punching an octopus, the characters of FF6 gain access to an airship. This allows them to fly to the Imperial capital, an experience for which the word "foreboding" doesn't quite feel adequate.

All I want to say about this scene is that it's great. Almost all the towns you've visited up until this point have been fairly small, bucolic affairs, so harnessing the power of Mode 7 to show the hulking metropolis rising up over the horizon, bathed in the glow of Batman-style spotlights, is a fantastic "oh shit" moment that lets you know that the whimsy of earlier areas is being put aside to make room for something serious.

I mean, I always assumed Bismarck the summonable whale was supposed to be huge, but if that image is anything to go by he'd be smaller than most real whales. That can't be right: these battle scenes definitely aren't to scale. I'm sure the human characters aren't supposed to literally be deformed freaks whose heads make up 60% of their body mass. No, I'm one hundred percent certain Bismarck is actually huge.

Bismarck is also kind of miserable-looking, with the protruding bottom lip of a spoiled child who's just been told they can't have any more cake and a snout that's wrinkled with displeasure. On top of that, he's surely named after the German battleship Bismarck, which was in turn named after Chancellor Otto von Bismarck, allowing you to go from magic flying whale to nineteenth-century Prussia in three simple steps. It's a bit disappointing you don't summon Otto von Bismarck himself, really. With his highly-strung nature and vaulting ambition, he probably would have seen a kindred spirit in Kefka.

Throughout the first half of Final Fantasy VI, you are occasionally attacked by a purple octopus who is either trying to eat you or is bent on getting revenge for you kicking his tentacled backside because he tried to eat you. His name is Ultros, and he is possibly the best thing in the entire game. 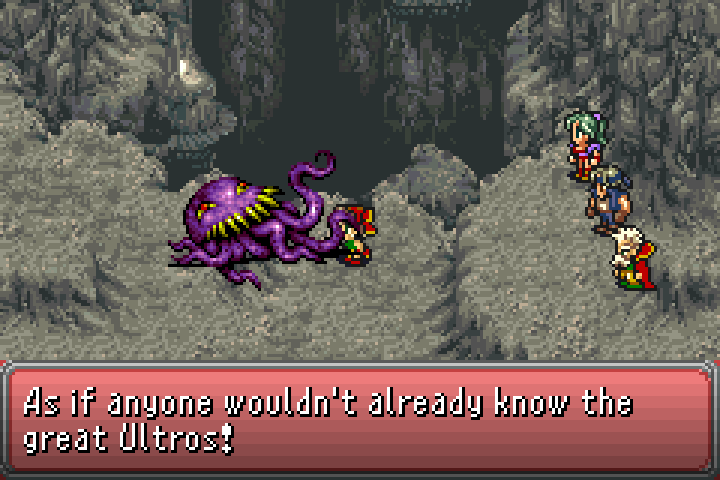 Then there's a giant cataclysm at the halfway point of FF6. The first time I played FF6 I was genuinely a little bit upset that this meant I wouldn't get to see Ultros again for the rest of the game - I'd fought him a couple of times and he wasn't exactly the staunchest of foes, so I didn't expect him to survive the end of the world... but he did.

In one of my favourite moments in all of gaming, Ultros ends up working as a receptionist in a fighting arena in order to pay off his vast debts. There could not have been a more perfect ending for a character who, despite being a vicious and cowardly weirdo, has really wormed his way into your heart by this point. It's almost Super Mario-esque in its resolution: I could just imagine the same thing happening to Bowser, with you knowing full well that Princess Peach will cancel the debt after a while, they'll go kart racing and play tennis but soon enough he'll be back to his usual bad-guy antics. It's a fitting punishment for Ultros, and a chance to redeem himself and settle down... but if you're honest, you're really hoping he'll go back to his old tricks as soon as possible.