A couple of weeks ago, I wrote about five pieces of videogame ephemera - five little bits of dandruff from the shaggy head of the gaming giant, none worthy of a full article on their own but all too dear to me to be forgotten. Here are five more. It's a thing now!

A simple one to start with - I really like the logo of Masaya, the videogames arm of Nippon Computers Systems and publisher of such titles as Gynoug, Langrisser and the infamous Cho Aniki series. Here's a version from Megadrive game Vixen 357.

The Pegasus is pretty nice, classical yet dynamic, but it's the typography I really like. It looks as though it could be the logo for a futuristic hoverbike-racing team, or at least one from the future posited by the cyberpunk anime of the late eighties. Masaya Cybernetic Implants and Heavy Manufacturing Concern, maybe. It's a name you can trust, if not say easily!
Here are versions from the NES and SNES, respectively:

I think the NES one is my favourite of the lot. It's a bit more compact, and the two-tone colouring on the S is neat. Perhaps it's not interesting to anyone else, but from an aesthetic standpoint I'd probably say this is my favourite game developer logo from the 8 and 16-bit era.
Oh, and that Japanese text? It doesn't say Masaya. It's says mesaiya, presumably NCS's attempt to call their games division "Messiah." So, they're either called Masaya, Mesaiya or Messiah. I'm glad they went with Masaya, because the logo wouldn't look as nice otherwise. Also, being called "Messiah" is going to create a lot of expectation that you might struggle to live up to.

In the original Silent Hill, any blood show on a still picture looks really good. Nice colouration with a pleasing viscosity to it, much better than the usual "red poster paint" effect you might see in lesser survival horror games. 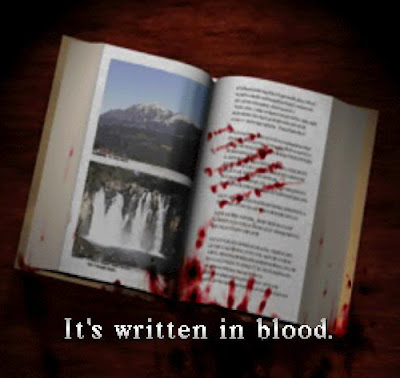 This is especially noticeable during the school portion of the game, because apparently Midwich Elementary had a critical shortage of pens just before Harry arrived and thus every note you find is scrawled in human blood. 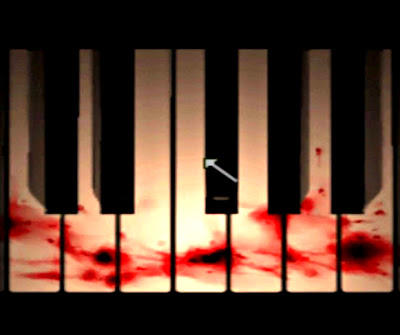 I think the claret-smeared piano is just an unfortunate side-effect of replacing all the school's ink with blood, mind you. There's no message being conveyed here, apart from maybe "don't pick your nose really hard just before your Grade Two exam." The point is, I think that the blood looks just swell. Crimson and inviting, as though it could still be warm. Don't you think so? Hello? Oh, everyone's gone, look.


The Last Tantrum of Kuros

Ironsword - what images does that name summon into your mind? If you said "Mills and Boon cover model and ultra-hunk Fabio" then well done, you've seen the box art for this game before. I meant in a wider sense, though. Doesn't it make you think of proud barbarians, the clash of steel, mighty thews and castles to be stormed? Well, Ironsword: Wizards and Warriors II doesn't have any of that. It has Kuros, a boggle-eyed knight of considerable lameness whose idea of swordplay is to kind of wiggle his mighty blade in the unthreatening manner of someone trying to open a reticent umbrella. Kuros is, to be frank, a bad knight. As such he dies a lot, yet even in death he cannot stop embarrassing himself.

Just look at that. The mad flailing is bad enough - a little decorum would be nice, Kuros - but it's the way his dangling leg swings in the breeze for a moment that really caps off this pathetic tableau.

While I'm on the subject of lamentable animations, here's something I mentioned briefly in the Tekken 2 article but I love it too much for it just to be a footnote. It's Nina Williams in the original Tekken's intro. She's running!

Yep, she sure is running. I think someone at Namco read Nina's design document, saw that it said "leggy blonde" and took this to mean "a pair of legs with a blonde head on top". Fortunately someone spotted this and managed to just about cram a torso in there. It's small and vestigial, but it at least provides somewhere to attach her dynamic, pumping arms.
There's something slightly unnerving about this animation, and it's not just that Nina looks like an acrobat that's grabbed a gun in a desperate attempt to escape from the Cirque du Soleil. What's it called when something looks human, but not human enough to avoid making you feel weird? The uncanny valley? Yeah, I think Nina's right on the precipice of that particular canyon.
Of course, it might be harsh of me to complain about the polygon work of the mid-Nineties, and I'm sure Namco did the best they could with the available resources. It's definitely harsh to single out Nina, because no-one from the original Tekken has aged well. Do you remember what loveable bear character Kuma looked like in that game?

That's right, like a terrifying hell-beast constructed from furry rocks and a seething hatred for humanity.

Most of you have probably played classic Super Nintendo RPG Chrono Trigger, but if you haven't, it concerns time travel. At one point in the game you end up in the realm of a prehistoric race of advanced douche-wizards called the Enlightened Ones, who live in the floating kingdom of Zeal. They have extensively studied and ultimately mastered the fields of art, science, magic, and totally sweet bedsheets. 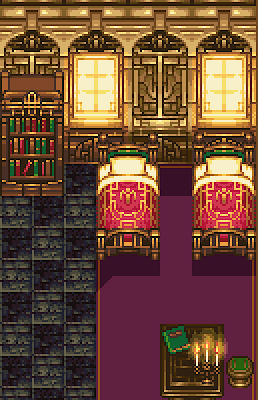 Just look at those duvet covers. So stylish, so refined, the elegant red and gold colour scheme married perfectly to the comforting fluffiness that they no doubt possess. They lose a couple of points for having a picture of a world-dooming energy siphon machine thing embroidered on them, but you can just pretend that's an angel or something if it really bothers you. 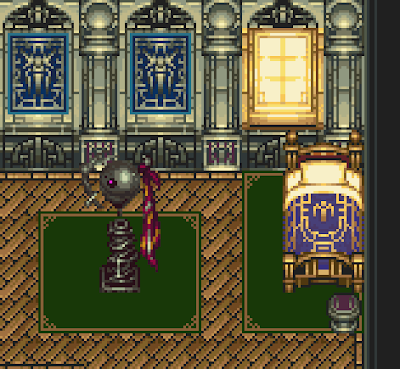 Don't like them in red? Have one in purple! Purple, the colour of royalty. Also gold, the colour of, um, gold. It doesn't get much more regal than that, folks.
Seriously, I would very much like some bedding that looks like that. Maybe I'll set up a Kickstarter to raise the cash to make some. Your reward for pledging ten pounds is a thirty-second video of me sleeping under said bedcovers. Pledge a thousand and you'll receive my old bedcovers. Well, I won't be needing them any more, will I?