International espionage isn't all sifting through phone records and number stations, you know. There is a breed of spy so skilled, so debonaire, so virile that they are granted a special title. No, not a double-0 number, but the much coveted title of The Super Spy, which coincidentally is the name of a 1990 spy-em-up by SNK for the Neo-Geo. You too can learn to be The Super Spy! 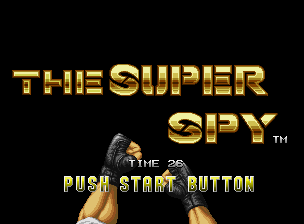 First things first: your spy is not super. Far from it. In fact, I'm not even sure he's a spy. Aren't spies supposed to be stealthy, stealing top-secret documents from underground lairs while drinking women and sleeping with martinis (or something)? There's none of that here, let me tell you. You play as a CIA man called Roy Heart, which is not a great start. Roy is hardly a name that fills your head with images of sophistication and intrigue, is it? No, it makes you think of soggy sandwiches and trainspotting. That's strike one against our hero, and he hasn't even started yet.
The vague plot is that there are some terrorists, and they have bombs and guns and some of them, the ones too stupid to be trusted with bombs and guns, have bits of lead pipe. How do you defeat this terrorist menace, I hear you ask? Do you have a fancy car with oil slicks and razor-wheels? Do you have an array of hi-tech gadgets? No, of course not. All Roy has is a pistol with twelve bullets, a knife that rusts faster than a fat kid gets down a bag of Haribo, and his bare fists. Great. 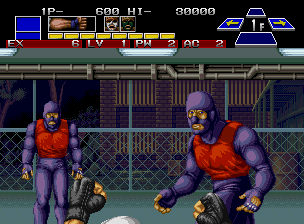 The gameplay of The Super Spy is pretty simple. It's a first-person beat-em-up, with our hero placed in the maze-like confines of the terrorist's base, where he must punch ninjas and Ghandi in the face to progress. First impressions are good: the music's pretty nice, and the graphics are as good as you would expect from a Neo-Geo game, punching a ninja in the face is pretty fun, and it all seems like it's going to go swimmingly. Sadly, The Super Spy starts out at the top of the rollercoaster, and it's a long way downhill from here. 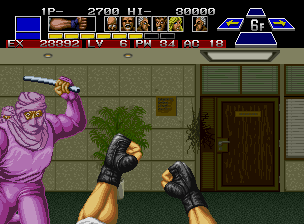 The first thing you might notice is that you can't turn around. You can move left, right, forward and backwards, but you can't rotate. This means that, like Battle Clash, 99% of the game consists of you fighting an enemy while sliding sideways. It isn't any more fun in The Super Spy than it was in Battle Clash, either. I'll persevere, though, and the game begins with Roy infiltrating the enemy hideout. Does he use all his training and expertise to sneak past the guards, maybe paraglide onto the roof or something? No, he walks in through the front door. I can just see his CIA handler cradling his head in his hands and sobbing as all the other handlers make fun of him for having a moron for an agent. A moron called Roy. Sorry, Mr. Handler.

When it comes to the actual fighting, you have three main weapons. First of all, there's your good ol' fists, and you will be using them for the vast majority of the combat. You've got a punch an a kick button, you can duck out of the way of attacks, and there's an uppercut and a right hook. All very useful. Secondly, you have your knife. It starts off fairly powerful, but the more you use it the weaker it gets, rusting away to near-impotence after a mere five or six stabbings. Say what you will, but that's a pretty rubbish knife. Imagine if Kratos had a knife like that, he'd be even angrier than he already is, if such a thing is possible, and he certainly wouldn't be dismembering gods and such with it. You also have a gun, and you get twelve rounds per continue. The gun is, quite frankly, rubbish. It seems to do more damage if you clobber them with the butt, (not in the butt; that isn't an option that is avaliable to you,) and the enemies seem to be able to dodge nintey percent of your shots. Very rarely, you get a machine gun that clears the screen, but mostly you will be sticking to your fists. 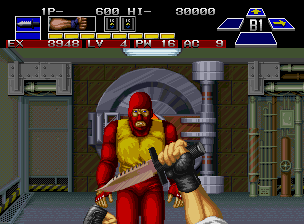 But who do you get to fight? Ninja terrorists, that's who. There are about four basic enemy types, and the most common is the most colourful clan of ninjas you ever did see. There's purple ninjas, red and yellow ninjas, neon pink ninjas, hell, there's even gold ninjas. When is that ever going to be good camouflage? Apart from that one goddamn time when you rob Fort Knox, that golden ninja suit is going to be sitting in the back of your ninja wardrobe, gathering ninja dust. It only gets taken out at ninja reunions when Ninja Dave harps on about that time he infiltrated Fort Knox and eveyone wishes he would stop clinging onto past glories and just move on with his life. Maybe there's some kind of complex ninja caste system based on the colour of your outfit that I am unaware of. As well as the rainbow ninja horde, you will also come across Ghandi, as well as a man who tries to jam a screwdriver in your eye: 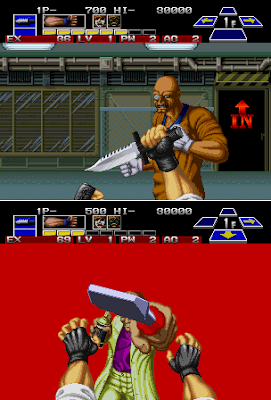 So much for non-violence. Also, that is one beautifully-drawn sprite of a screwdriver being jammed into my eye.
Inbetween punching guys, you will find various scientists being held captive, and what a motley bunch they are: 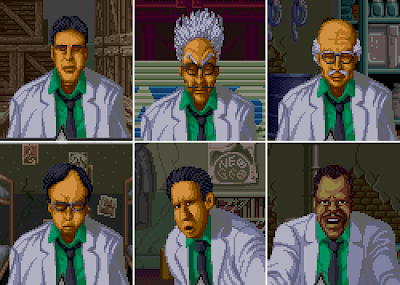 It's like the mad scientist edition of Guess Who? It's easy to win if your opponent gets the card with the guy on the bottom-right's face: you just ask "does he look like Danny Glover?" and you win. I just noticed they are all wearing the same shirt and tie, too. That must have been pretty awkward when they all walked into the morning meeting wearing identical clothes. Fortunately, they were kidnapped by terrorists soon after, thus deflecting the attention away from their collective faux pas. Although the terrorists have abducted all these scientists, their overall goals are never really explained. There's some vague talk of bombs and such, but what are they fighting against? American Imperialism? High wheat prices? Such a lack of focus is probably what led to them being defeated by one terrible spy. 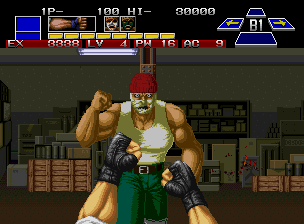 After a few floors, Roy fights two bandage-wearing goons, and the first section of the game is over. Nice job! But then the terrorists take over the Tadoya Car Company, and it's up to Roy Heart to climb the 16 floors of the tower and defeat the villain at the top. Of curse. This is where The Super Spy starts to get a little grating. You now have to do the exact same thing you did previously, only for much longer and with many, many, MANY more ninjas. There is a fight literally every three or four steps, and having to wade through the many-hued ranks of the United Colours of Taliban gets real old, real quick. It's kind of a shame, because there's the core of a good game here; sadly, it gets buried beneath a pile of dead ninjas.

One thing you can do to liven up the tedium is looking out for appearances by G-Mantle. If you don't already know, G-Mantle was sort of SNK's mascot for the Neo-Geo, and he is a cool-looking guy:

He appears in the backgrounds of quite a few SNK games, and he pops up in The Super Spy, appearing on a couple of posters and a framed photo:

Here's a nice collection of his appearances. It's in French, but you'll get the gist.

Anyway, back to the spying. Roy has fought his way up the many stories of the Nakatomi Plaza Tadoya building, stabbing the occasional boss who is only slightly different from the regular enemies. There is a section of backtracking, and I very nearly stopped playing, the monotony of shuffling sideways two inches, punching a ninja, shuffling two inches, punch, shuffle, punch, shu... well, it's not exactly enjoyable, but knowing that I was near the end gave me that extra bit of juice I needed to get through. At the top of the tower waits the the boss of this SNK game, in his sharp suit and slicked-back hair. No, it's not Geese Howard, it's a fellow called King. Nice self-aggrandisement there, buddy. 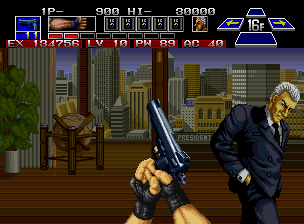 The fight begins, and it's exactly what you'd expect. Did I mention you can't duck in boss fights? That's right, the game takes away your one defensive move, so you have to resort to even more sliding around sideways to win. Luckily, King isn't all that tough and soon he is defeated. Thank Christ for that. The ending is a real downer, promising that for every terrorist you kill, two or three (forever vague, these terrorists) will take his place, and warning that the world is a dangerous place. So, you get a warning about terrorism, and in the background there is a picture of the Twin Towers. It's... kinda weird. 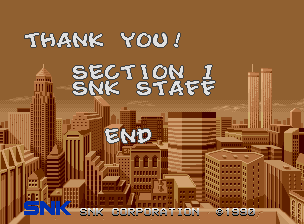 As you may have gathered, I can't really recommend The Super Spy, and that make me kinda sad. There are some nice ideas and moments in the game, the graphics are good and the music is decent too... but all that good work is destroyed by the constant, grinding repetition. Ice cream is great, but 1,000 ice creams in a row is just unpleasant. So, The Super Spy is like 1,000 ice creams. No, wait, that makes it sound good. Okay, we'll say it's like 1,000 ice creams, each one contaminated with a small amount of mercury so that repeated consumption will cause mercury poisoning, insanity and eventual death. Yep, that sounds about right.
Posted by VGJUNK