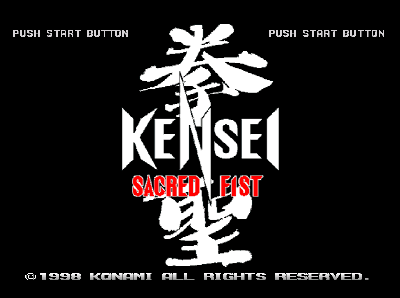 The game itself really isn't that bad. The graphics are decent, the music is better than average the the gameplay is solid, with the dodging mechanism in particular being pretty cool. However, it has one major flaw: it features the blandest cast of characters every assembled to punch the crap out of each other. You might argue that a simulation of a fighting sport, the Fight Night boxing series for example, has blander charcters because they are all essentially just men in shorts, but a) Kensei isn't a simulation and b) I think it manages to out-bland them anyway. It has some fairly impressive levels of bland, that's for sure. Let's start with the character select pictures: 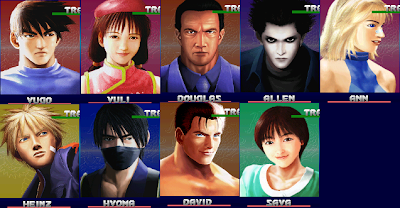 (click for bigger)
I see they went with the faintly unsettling semi-realistic art style, then. The first thing you might notice is that the blandness isn't limited to their appearance; just look at some of the names they've been saddled with. David? Ann? Douglas? David is the most unfortunate in this regard, because his surname is Human. David Human. That was the best Konami could come up with. Poor Yugo has the misfortune to be both named after a crappy car and have ears the size of tombstones, and Saya looks like the kind of girl who seems sweet at first but then turns out to enjoy skinning cats and wearing their eyeballs as a squishy necklace. Actually, she also looks like the kind of girl who might turn out to be a boy. I have to say I think Allen's picture is the best, because they really managed to capture the face of a teenage goth who doesn't want his picture taken because it's "too conformist". Cheer up, emo kid.
Maybe their blandness is limited to their faces? Well, no, it isn't. Let's have a look at the fighters in full: 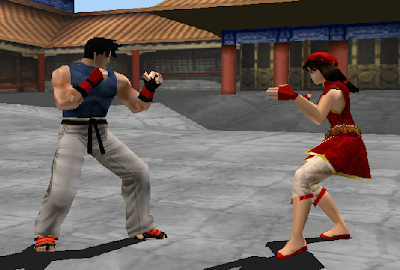 Yugo is the Ryu of Kensei: Sacred Fist. You could argue that Ryu is bland, and I guess he is. But, in Street Fighter, for every Ryu there's a Blanka. Kensei cannot make this claim. So, Yugo gets the game off to a very generic start by looking like every karate-based main character ever. If I ever get sucked into the videogame universe a la Captain N, the first goddamn thing I do will be to open a shop that sells hand-guards, and watch my gold/gil/zenny/potch fill up as every beat-em-up's main character comes to me to buy their ubiquitous hand-guards. Yuli is less bland, but she's hardly wildy innovative. Also, she's wearing a beret and therefore cannot be trusted. Girls who wear berets cannot be trusted. 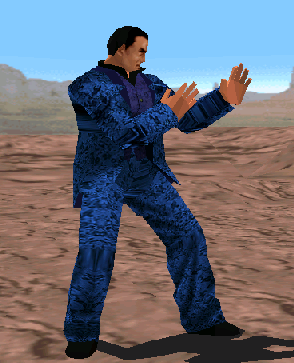 Douglas is probably the most interesting-looking fighter of the main bunch. That is probably because he looks so much like Steven Seagal. Well, Steven Segal in his pyjamas, at any rate. I assume that pattern is supposed to be on his suit; it could be a terrible graphical glitch and I'd be none the wiser. 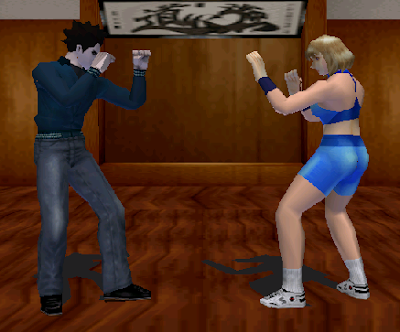 From the least bland to the most bland. The circle is complete. Allen is just wearing sensible, everyday clothes. What kind of videogame character wears sensible, everyday clothes!? Also, he went to a lot of effort to make his face look gothic but forgot to bother with the clothes. He should be wearing voluminous black jeans and an Opeth t-shirt, at least. Ann was just walking back from filming an exercise video when she was attacked by this half-Goth weirdo, so she's probably a little confused. I'm beginning to think the designers just took the characters from whatever they happened to see when flicking through the TV channels. 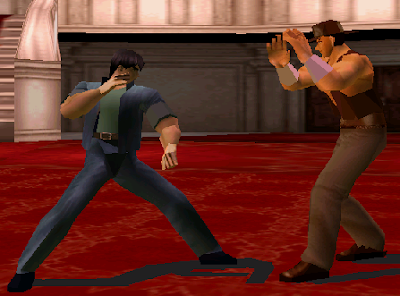 Hyoma sure looks like he's been livin' in the eighties, eighties, eighties. Perhaps he's on his way to a costume party with a Miami Vice theme. Someone ought to tell him rolled-up sleeves don't look cool. David... well, he's a cowboy. Or possibly Indiana Jones. He's supposed to be a wrestler, you know. David "The Flamin' Cowboy" Human. The sheer lack of imagination that's gone into these designs is just a bit depressing, and I find it hard to even imagine Konami's employees sitting around and going "right, we need a costume for this Hyoma guy. How about trousers and a jacket, but here's the twist... the sleeves are rolled up! Yes, I love it! Print that, we're going to lunch." 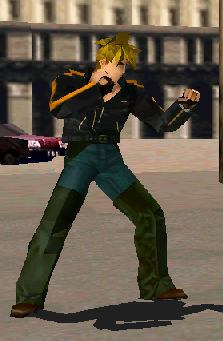 No baked-bean jokes here, boss. Heinz is a little more interesting, but he still just looks like a cross between Hwoarang from Tekken and the main guy from The Bouncer. They also couldn't have chosen a more generically German name for him unless they'd named him Hans Von Sausagekaiser. 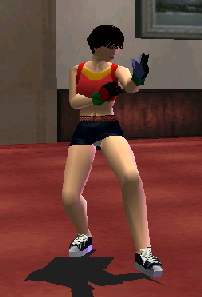 Finally there's Saya the animal mutilator. She's essentially Tifa from Final Fantasy 7, except her top is pink instead of white and her breasts aren't comically oversized.

So there you go. I'm sure you'll agree that Kensei: Sacred Fist has probably the blandest, most generic set of characters in a fighting game (or, indeed, any game,) ever. There is an unlockable alternate version of every character (much like in Tekken) so maybe I'm being unfair in judging the game on these characters. Then again, these are the main characters, the ones that Konami put forward as the most important, so I guess the blame lies with them. If only I could find all the character designs I made as a kid for the constant flow of side-scrolling beat-em-ups I used to invent. If that's what I'm competing against, I could have been working for Konami for years now!
Posted by VGJUNK