There are certain games that, once every year or so, I pull out of whichever box under my bed they were "tidied away" in and play through them all over again. Games like Marvel vs Capcom 2, Castlevania: Symphony of the Night, F-Zero GX and the subject of this little article, WaveRace 64. Just typing it makes me feel young again! 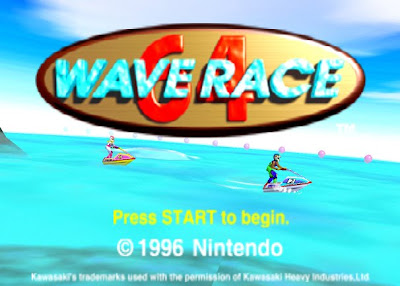 I knew it was time for WaveRace, because of my near-constant humming of the title theme. Just like swellings in the groin for the plague, humming the theme tune is the first symptom of a full-blow case of WaveRace. I have a cycle where I think "Oh, it's just nostalgia that keeps bringing me back," and I have to admit that nostalgia is involved. I remember being at my friends house just after he'd received a Nintendo 64 (on release day, the lucky sod). After being blown away by Super Mario 64, (as you bloody well should have been, back then,) we put WaveRace on and I instantly loved it. In fact, we enjoyed it so much that when his mother insisted we go outside in the sun, we took the television, the N64 and an extension cable into the garden and played it there. That's some fine videogamin' right there, I can tell you.
But why do I love it so much? I know some people who just find the whole thing a bit dull. Well, there are a few reasons. Some of it is the sheer Nintendo-ness of the whole game: the Big N's spirit shines through the entire thing like an atom bomb inside a particularly thin-skinned puppy. The fonts, the sound effects; there's just an overwhelming lack of cynicism about the whole affair. Then there's the announcer. If you've read pretty much any of the other articles on this blog, you'll know that I have a bit of an obsession with voices, announcers and sampled speech in games. Well, the WaveRace announcer is a particular favourite, a genial fellow who sounds genuinely happy for you when you're doing well, as well as shouting "BAN-ZAI!" like a madman when you win. The music is excellent, with the title theme sticking in your head like a harpoon made of glue. The biggest plus point for me, though, is the sea. 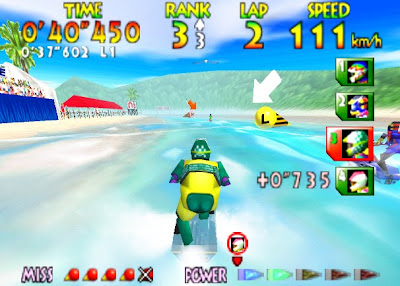 Yes, as you might have guessed from the title, WaveRace revolves around racing around on the sea: on jetskis, to be specific. And what a sea it is. It was, and probably still is, the most accurate simulation of the sea in any game. Waves crash in, the tides go in and out, floating crates get right in your god-damn way and the whole thing just works perfectly. The racing is as you would expect, you know, get to the finish first, with a few additions. There are buoys on the water, and you have to drive (do you drive a jetski? Sail it? Who knows.) on the specified side of the buoy. You can tell which way you have to go around them by their colour, and the letter L or R written on them, or even by the big flashing arrow above them: they really want you to know which way to go here. For every buoy you navigate correctly, a segment of your power bar fills, and when it's full your top speed is increased. Miss a buoy and you lose all your power bar: miss five and it's game over. The thing that make it that bit special is the way the sea affects your racing. 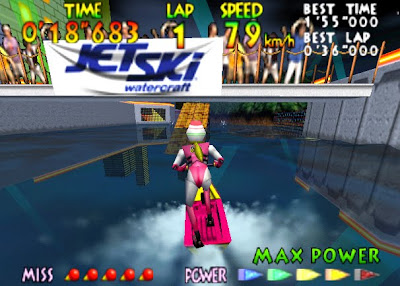 Waves might jump you into the air, making it difficult to turn, for example. The water changes as the races go on, too, so you might start a race at high tide, meaning that you have to go around a pier, but by the third lap the tide has gone out, and you can drive/sail under the pier. Add to this the fact that, as anyone who has sailed a boat on Grand Theft Auto can tell you, driving on water is very different from driving on solid ground, and only being able to turn while accelerating takes some getting used to. It's very rewarding once you nail a slalom through the buoys, and it's this unique take on racing that makes it a personal favourite. There's even a stunt mode where you literally have to jump through hoops to do well, all whilst some nosy dolphins look on. 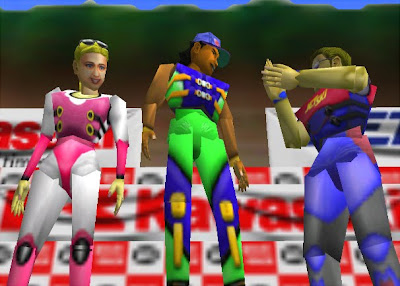 Obviously, it's not without it's problems: there aren't that many courses, and there are only four racers, two average fellas, a skinny girl and a fat guy, although one of the average guys does look a bit like Albert Wesker when he takes his helmet off, and that's always a plus. Actually, now I look at that sentence I've realised that is, for me at least, the game's only flaw: there just isn't enough of it. A cartridge goes for as little as 99 pence on eBay, so do yourself a favour and pick it up, and soon you too will be shouting "MAXIMUM POWER!" at your nearest and dearest. While you're at it, use some Google-Fu and get the soundtrack from Galbadia Hotel and feel the Nintendo magic.
Posted by VGJUNK