The Caped Crusader, The Dark Knight, The World's Greatest Detective: that's right, it's time for Bruce Wayne to slip into something a little less comfortable and become The Batman, just so that I can have a quick look at some sprites from various Batman videogames. What a selfish person I am.
Batman, 1989, NES, Sunsoft

An early Batman sprite, looking like he'd fit right in in Castlevania. I'm sure even the Belmonts would admit that Batman could do a better job of sealing Dracula away. With Batman on the case, I doubt he'd be rising once every hundred years, when the moon is in the eighth house... hang on, that's Count Duckula. With his blue and purple colouring, Batman rather reminds me of Skeletor here. Skeletor vs Batman: now there's a comic I'd like to see. After the battling mighty supervillains like the Joker and Mr. Freeze, I'm sure Skeletor's utter incompetence would be a welcome change of pace for the Dark Knight.

A game with some thoroughly excellent (by NES standards) graphics and music, ROTJ also has one of my favourite Batman sprites. Clad in an unusual electric blue colour pallette, Batman looks like he means business, even if he does appear to be wearing some rather feminine thigh-length boots. Not shown here: his very nicely animated cape.

A bit of a backward step from ROTJ, Bats has gained a curiously conical head, perhaps designed to afford him a greater aerodynamic profile as he glides through the night and kicks a goon in the back of the head.
Batman, 1991, Arcade, Atari

At last, a Batman who is, well, Batman coloured. He does walk around with his cape held close in a Phantom of the Opera manner, however; a walk that is not so much menacing as it is foppish. I can only assume he walks this way to conceal his clenched fist behind the cape. They'll never see it coming.
Batman, 1991, Megadrive, Sunsoft

Oh dear. It's all gone wrong for Batman here, as one of his many enemies appear to have swapped his legs with those of an elephant. His cape looks less like a nanotech-infused, bulletproof gliding aid and more like a binbag, and he appears to have lost his hands. How unfortunate.
Adventures of Batman and Robin, 1995, Megadrive, Sega 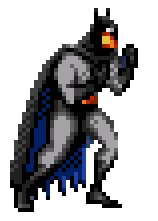 A sprite in the style of Batman: The Animated Series here, which is, as everybody should know, the best version of Batman in any media. His sprite looks good too, standing in a boxing "put up your dukes" pose and having the body shape of a 1930's strongman. My only worry is the state of his ankles: they're so thin they're liable to snap, and just look at the way his right calf is squeezing into his boot. That can't be good for his circulation.
Batman - Revenge of the Joker, 1992, SNES, Sunsoft

This isn't Batman. It looks more like someone pretending to be Batman, wearing a pretty naff costume. Not enough muscle mass, that's his problem, and the shape of his eyes give him a kind of fearful expression.
Batman Returns, 1993, SNES, Konami 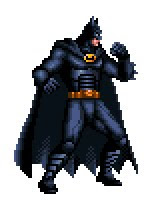 Now we're talking. You could always rely on Konami for good sprites, and this Batman is definitely the pick of the bunch. It sounds like a simple thing, but it's best feature is the fact that all his proportions are right and, even on the tiny scale of SNES sprites, they've managed to make him look as though he's grimacing in a very Batman way. Even the shading of the cape is done very simply, yet it give the cape a satisfying solidness. All in all, top marks to Konami.

And that's it for today. I'm sure that I will be doing more Batman-related articles in the future. Will they be at the same Bat-time, same Bat-channel? Who knows.
Posted by VGJUNK