Today I’m looking at something I don’t consider a game so much as a training manual for the inevitable clownocalypse. Calm your nerves, steady your aim and prepare to become the real reason dinosaurs went extinct in Stern’s 1983 arcade shooter Great Guns! 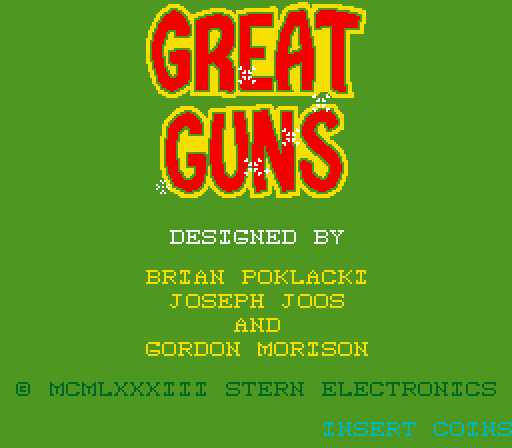 Great Guns, not-so-great title screen. It’s nice that the game’s creators get credit right there on the title screen, but it’s hardly a sumptuous visual feast that’ll draw in passing gamers, is it? You’d think there’d at least be a picture of a gun on there somewhere, but no. Just white sparkles that make it look as though the logo is being served with a pinch of salt. 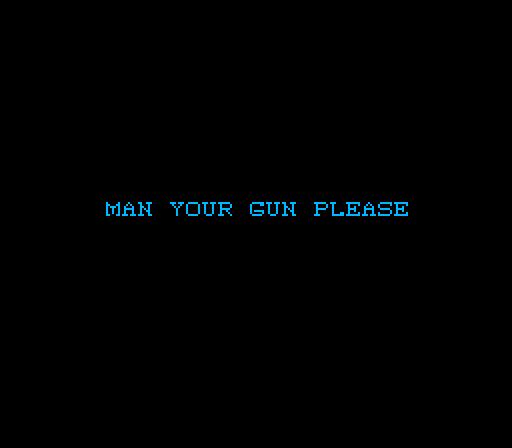 Yep, Great Guns is a target shooting game that uses positional controls rather than lightguns. The guns in question are two honkin’ great full-sized rifles attached to the cabinet, for that authentic shooting experience. It makes reading Great Guns’ service manual fun, because the diagrams resemble a Fallout raider’s blueprints for shotgun traps.
As always when covering lightgun games, it’s important to remember that they’re a case where playing them via emulation doesn’t give a true indication of how good the game is. So much of the fun is tied up in the visceral enjoyment of actually holding the physical gun, plus I’ve got no way of knowing whether Great Guns’ controllers were reliable or accurate. With that in mind, here’s a tour of the shooting opportunities that Great Guns has to offer. 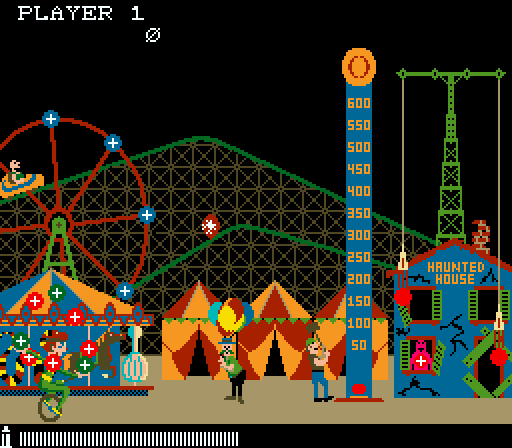 The carnival is in town, with all the thrilling rides and attractions that you’d expect – the rollercoaster, the haunted house, the strange and seemingly pointless pulley system that sits on top of the haunted house. All the favourites of kids young and old, I’m sure you’ll agree, and it’s up to you to ruin everyone’s day by shooting as many things marked with a white cross as possible. You’ve got a limited amount of ammo to score as many points as you can. Great Guns really is as simple as that. 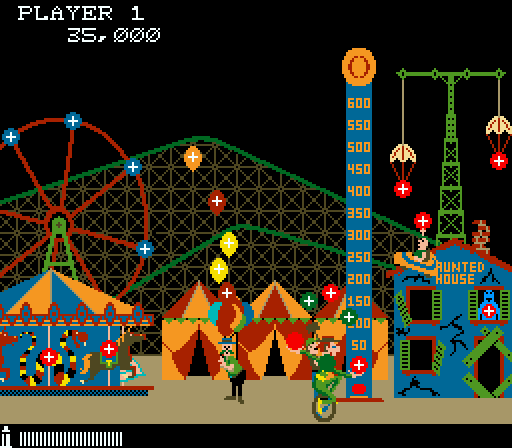 Of course, all the elements of the stage are moving, so it’s not as straightforward as a still screenshot might suggest. The unicycling juggler moves across the bottom of the screen, for example, with each of his spinning balls being a viable target. Shoot them all to receive a golden medal and the undying gratitude of the populace for your part in reducing the number of unicycling jugglers in the world. No, not really, you just get points. All you ever get is points, and occasionally a few extra bullets.
As for the rest of the carnival, the carousel spins, people ride the rollercoaster and the planet’s most incompetent balloon salesman is constantly letting flocks of his product drift into the sky. Just look at the balloon man’s moustache, he’s clearly related to Dr. Robotnik. Incompetence just runs in the family, huh?. The obvious star of this scene is the ghost that pops up in the window of the haunted house, because they’re clearly having more fun than anyone else. Okay, so what’s in the next stage? 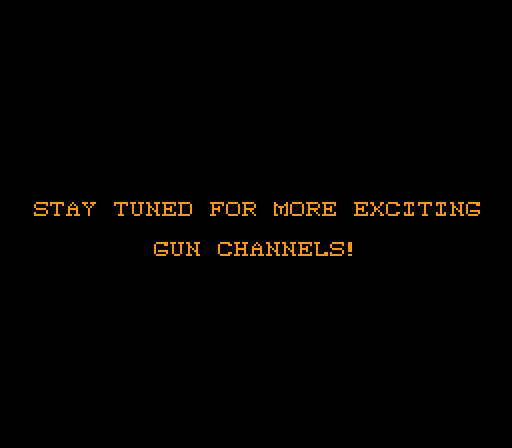 Sorry, not “stage,” I mean “gun channel.” I’ll stick around, I guess. I’ve been told it’s going to be exciting. 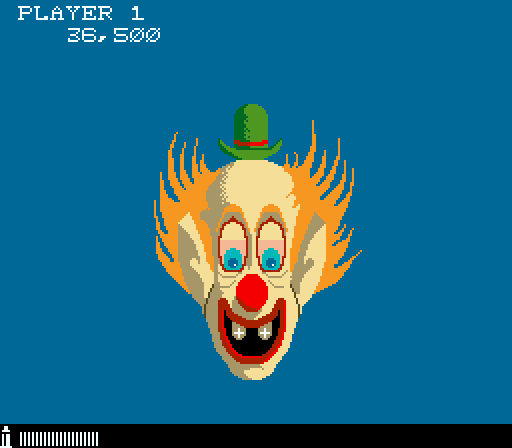 I suppose terror is a kind of excitement.
Yep, this screen all about shooting a floating clown head right in its hideous grinning face. Rather than the multiple targets of the carnival stage, the clown presents one or two targets at a time to test your precision shooting skills. There’s a target under his hat, targets pop out of his ears on springs and rather disturbingly the clown offers it’s own facial features as targets – urging the player to shoot it in the teeth or right in the eyes, all with a goofy smile on its face. It’s smiling because it knows that, as a clown, it cannot be harmed by something so mundane as a gun. 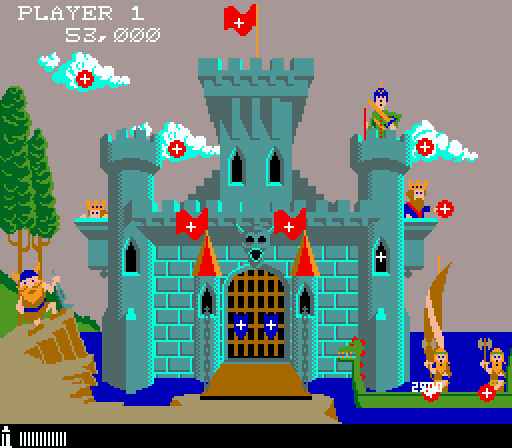 Something much less upsetting next, with a jolly little scene of a castle under siege by viking raiders. It feels a bit more interactive than the previous scenes, which helps; for example, shooting the gate open releases knights that you can hit, and knocking all the vikings out of their longboat causes it to sink. It’s definitely the “gun channel” that I enjoyed the most, thanks in no small part to the adorable sight of the king and queen cowering behind the parapets. That said, the real reason I enjoyed it is because after playing the first two stages I went into the dip switch settings and increased the size of the targets' hitboxes from “infant microsurgery level of precision” to “merely challenging.” Seriously, the default settings require absolutely pin-point shooting to score a hit, so the guns on the actual arcade cabinet better have been pretty bloody good. It doesn’t help that most of the targets are placed on round, coloured targets, because it tricks you into thinking that any hit on the round coloured target will be good enough. It isn’t. You have to hit the cross itself. 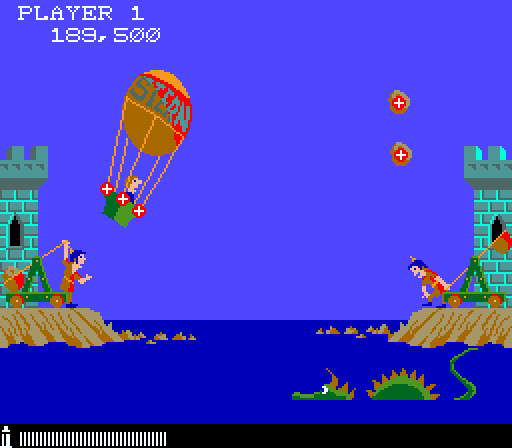 Less interesting than the castle scene is this screen of two poor fools locked in an endless catapult war. You can try to show them the futility of their struggle by shooting the catapulted boulders out of the air but they’ll never give up their endless war. Mind you, they look pretty cheerful. Maybe I’ve misread the situation and they’re actually boulder tradesmen who can’t afford a boat.
Also present are a sea monster with a particularly tricky target in its mouth, and a chap who had the misfortune to fly across a gun range in a hot-air balloon. Surprisingly you can’t pop the balloon. However, you can destroy its sandbags, and the lack of ballast causes it to drift up into the stratosphere. That’s definitely worse. 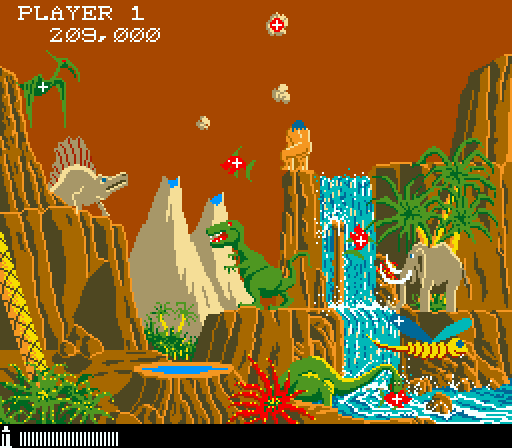 The time-travel continues, and now we’re back in a prehistoric scene seemingly designed specifically to annoy paleontologists. Cavemen, dinosaurs and elephants all in the same place? Preposterous! I suppose you could argue that it’s supposed to be a woolly mammoth, but there are two drawbacks to that interpretation; one, it’s not woolly and two, it’s an elephant. However, the most important aspect of this scene is that the caveman has been drawn with a very well-defined arsecrack. Go on, take a good look at that caveman’s backside. Delightful. 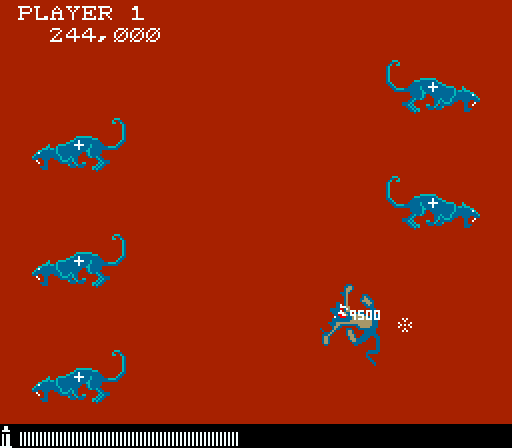 There are also some smaller, less involved scenes that I think are triggered by doing well on the previous scene. Don’t quote me on that, though. I certainly didn’t feel like I was doing well, especially on the rather difficult dinosaur scene. I tried taking it more slowly and going after precise shots, but if you go a couple of seconds without firing Great Guns penalises you by taking some of your bullets away.
Anyway, here some panthers run back and forth across the screen. Every time you shoot them, they run faster. If you do manage to hit them, and that’s hardly guaranteed, they flail around in a very Tom and Jerry pose for a seconds. That’s about all the excitement that this stage has to offer, if I’m honest. 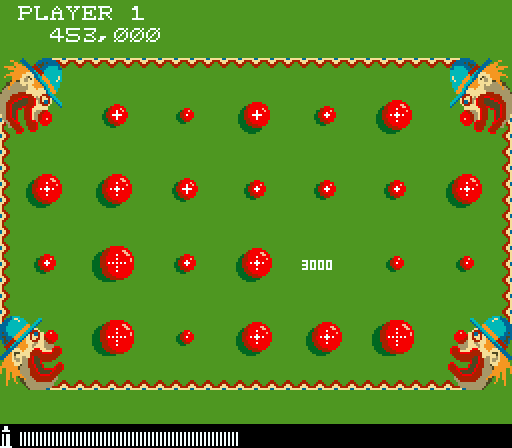 Ah yes, the field where they grow the clowns. When a clown dies, usually in a battle for territory with a larger, more aggressive clown, their shiny red nose detaches from the corpse and releases a cloud of spores that, in turn, generate yet more red noses that will eventually develop into fully-grown clowns unless some brave person eliminates them during infancy. Make sure you shoot them all! If even one clown nose escapes, the process will begin all over again. You should really be using a flamethrower rather than a rifle for this scene, but needs must. 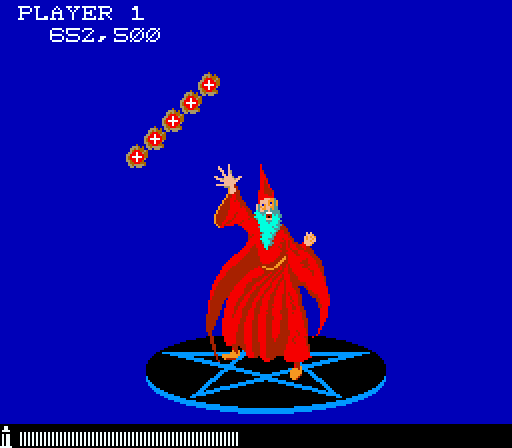 Here’s a wizard. According to Great Guns’ flyer, the wizard “emanates puffs of smoke from his fingertips,” which as far as wizard magic goes is a very poor showing. I suppose it’s a magic missile in the very loosest sense, but it’s hardly a fireball or something, is it? Also they look more like meatballs than smoke. I’m being unfair, of course. Considering this is a game from 1983, that’s a very impressive wizard. I know it’s easier to implement such a sprite when the only movement the wizard makes would be best described as “jazz hands,” but it’s still a nice sprite. 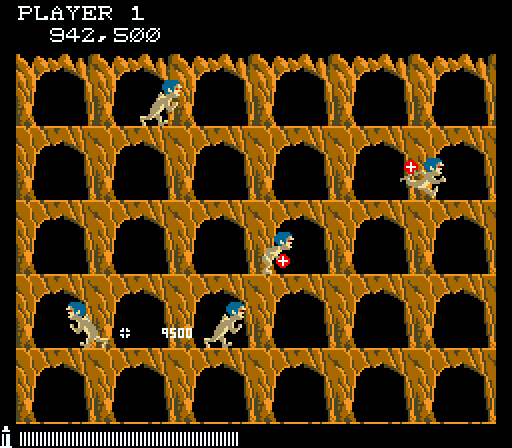 Finally, there’s this cro-magnon recreation of a Scooby Doo bit where the cavemen scuttle back and forth carrying targets, and when you shoot them they change directions. Again, not the most engaging shooting gallery I’ve ever played. I spent most of my time wondering why they’ve all got blue hair. Fashion, I suppose. Oh, no, I get it - they're all wearing hats made from the pelts of those blue panthers I shot earlier. They have yet to develop either the sartorial skill or the levels of shame needed to cover their cavemen nudity, mind you. 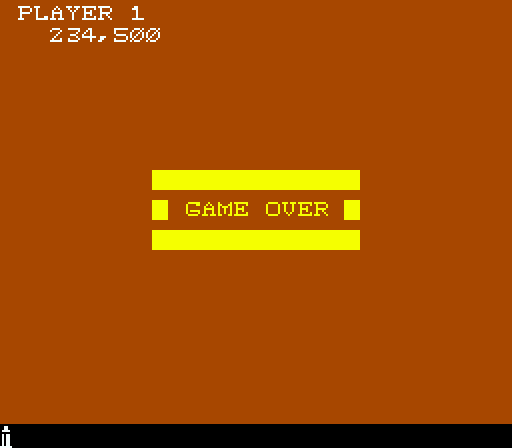 That’s it for Great Guns. The game’ll keep going until you either run out of bullets or get bored and stop playing, and while I was playing it it felt like a fifty-fifty shout between those two outcomes. I’ve already said that it’s kinda pointless to try to decide whether Great Guns is “good” without playing it on original hardware, but given the scenes that are presented to you I don’t think it’d suddenly become an excellent game with a fake rifle in your hands. It’s certainly not bad, at least once you’ve turned the difficulty level down, and the bigger scenes are quite charming in their way. I think it’s just that Great Guns is old enough that it’s right on the cusp of being too simple for me to really enjoy all that much. It really is just point and shoot, with no power-ups or special challenges to liven things up. On the plus side, it does realise that all clowns should be eliminated and therefore serves a valuable purpose as an educational tool.