ALL HALLOWS: RISE OF THE PUMPKIN (ZX SPECTRUM)

What do you get if you cross a jack o’lantern with a spring? In my experience, a warning from the police for having something dangerous and distracting attached to the roof of your car. Another answer might be today’s game – it’s All Hallows: Rise of the Pumpkin, a ZX Spectrum platformer created by John Blythe of Rucksack Games and released in… 2018!? 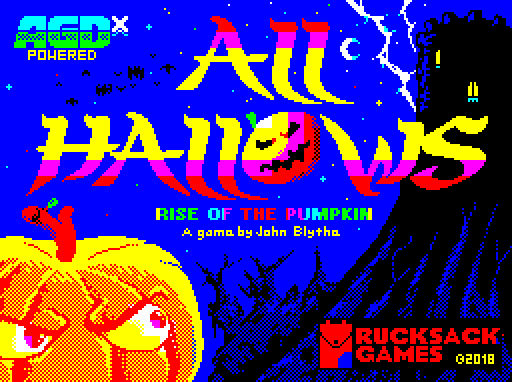 That’s right, All Hallows is a brand-new ZX Spectrum game released mere weeks before the writing of this article. You can download it for free at Rucksack Games’ website if you’d like to try it out for yourself. Personally, I knew I had to give it as go once I’d seen the loading screen. Multiple pumpkins, dark castles, a flock of bats, it’s got Halloween Spooktacular written all over it. I’m something of a jack o’lantern purist and I prefer the eyes of my carved gourds to be empty voids, but this pumpkin’s determined gaze is not to be ignored. It’s also a brave move to make a game about pumpkins on the ZX Spectrum, a system which does not include orange in its colour palette – but the dithering effects make it work and you’re unlikely to mistake this pumpkin for an inferior squash such as a disappointing marrow. 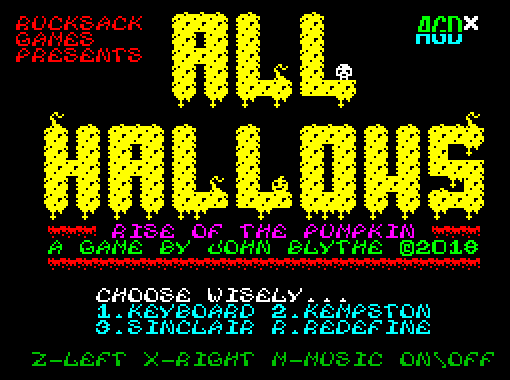 The story of All Hallows is that familiar tale of an evil creature breaking free of its imprisonment and the plucky, carved hero that must re-seal the dread force. In this case the evil creature is the Forest Lord, and the Moonstones that hold him captive in the dark castle are weakening. Only the touch of a magical creature can restore the Moonstones, and what could be more magical than a sentient pumpkin? Not much, if you ask me. So that’s the goal of the game: rub a pumpkin on some rocks. Let’s get to it. 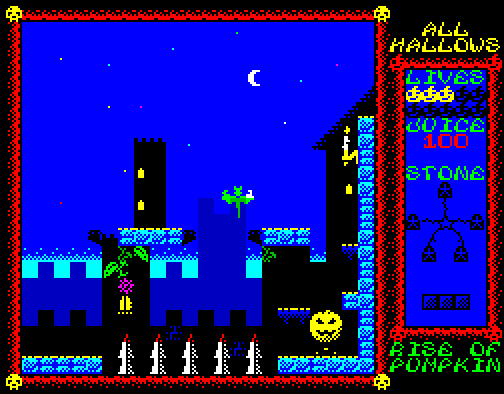 Oh yeah, that’s the stuff. All the things we were promised by the loading screen are here, although the bats are green now and consequently easier to see. That’s good, it’ll hopefully make them easier to avoid. You can see platforms and spike pits, so I’m sure you’ve already got a good idea of All Hallows’ general gameplay – although controlling your pumpkin takes some getting used to. Remembering the actual controls isn’t difficult, because there are only two of them. You’ve got left, and you’ve got right. That’s it. You might notice there’s no jump button. The pumpkin doesn’t need one, because like a sugared-up child waiting at a bus stop it’s always bouncing.

Hypnotic, isn’t it? The pumpkin is forever bouncing up and down on the spot, and you move it left and right, timing your movements with the bounces to traverse chasms and sproing over enemies. “Sproing” is a verb now, you heard it here first. All Hallows being a game about a very bouncy pumpkin means it will obviously draw comparisons to Cauldron 2, and the creator himself says Cauldron 2 was an inspiration, but I think we can all agree that there is room in this world for more than one game about an elastic jack o'lantern. 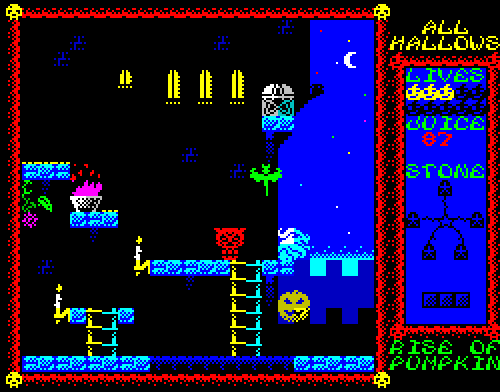 There’s a Moonstone on the second screen of the game, the rock with the pentagram on it. Unfortunately it’s all the way up there and my pumpkin’s not that bouncy. Looks like I’ll have to go the long way around, taking care not to touch the roaming skull because that’ll result in the instant loss of a life. You also have a health bar that is drained when you touch bats or certain fires, and it’s represented by your pumpkin juice. I’ve never really thought about it before but there must be people out there who drink pumpkin juice, right? A pumpkin smoothie, at the very least. I did quickly look it up and apparently “Pumpkin Juice” is also a Harry Potter thing and thus my eyes glazed over almost immediately. 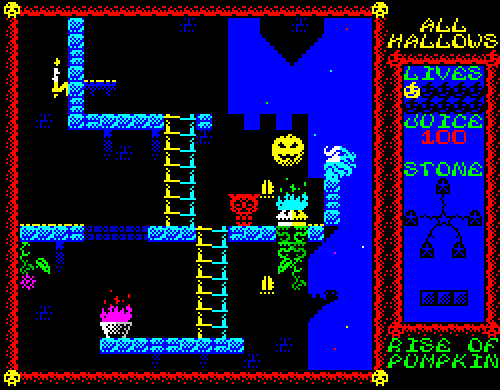 You can replenish your juice by parking yourself in the flaming pots. No, not the red flames, the blue flames. The red flames hurt you. Here, I’ve come up with a simple memory aid: if flames be red, you’ll end up dead, if flames be blue, refill your goo. Presumably the otherwise strange decision to have some fire be deadly and some not was based on saving space by reusing sprites, but I would have preferred it if the health refill areas were cauldrons or tiny pumpkin day spas or something. 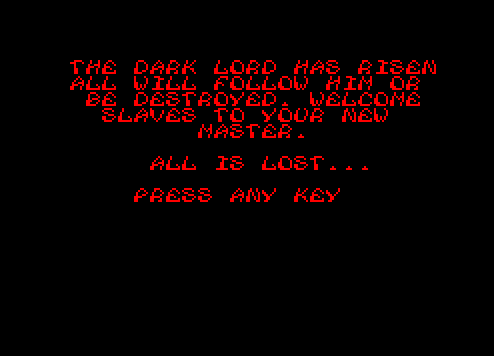 It might have been released this year, but All Hallows is still a ZX Spectrum game and is therefore still pretty darn difficult. It’s certainly not pitched at the usual Spectrum difficulty level – that is, somewhere between “vicious” and “sadistic” - but there are plenty of one-hit kills and controlling a character that is constantly springing up and down like a malfunctioning whack-a-mole game presents its own challenges. 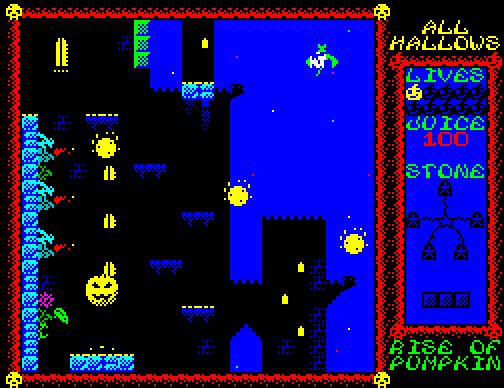 The pumpkin’s unusual movements are the game’s greatest strength, however. Learning the intricacies of the control scheme, tuning in to the rhythm of your bounces and figuring out which bits of the scenery you can use as a perch is where the fun comes from. I’m sure we’ve all played plenty of explore-em-up platformers with fireballs over flame-pits and switches that unlock unseen doors and that’s exactly what All Hallows is, but learning to control this rubbery gourd makes it a different enough experience that I found myself wanting to stick with it. 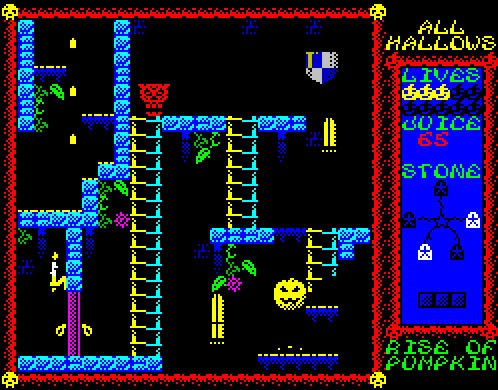 My only issue with the controls is ladders. You’ve got to climb ladders sometimes, and you do that by bouncing into them. This makes the pumpkin rocket up the ladder, because it jumps again as soon as it touches the next rung up and, as you can see, the rungs are very close together. This is fine when you want to climb a ladder. You’re the goddamn Usain Bolt of ladder climbing. The thing is, sometimes you want to go past a ladder and this requires far more accurate timing than you’d expect, because as soon as you touch a rung you start moving upwards so you’ve got to move into the ladder at the lowest part of your arc and hope you’ve got enough horizontal momentum to get past the ladder before you’re propelled to the top. I probably lost more lives due to accidentally climbing ladders right into the toothy embrace of a wandering skull than via any other misfortune. It’s the weak link in All Hallows’ gameplay… but it’s hardly insurmountable, so things could be a lot worse. 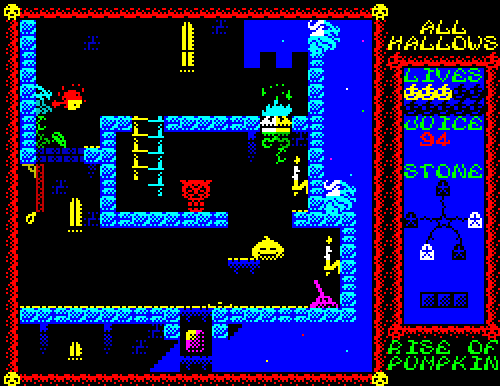 The “Second Worst Thing” award goes to this little section where you have to get past the skull on the small platform and on to the ladder beyond, a segment I had tremendous trouble with. I suspect this is more to do with me being crap at computer games than anything else, mind you. Fortunately the sight of the pumpkin’s squished-up animation frame as it hits the ground is preventing me from getting angry about it. It's just that charming. 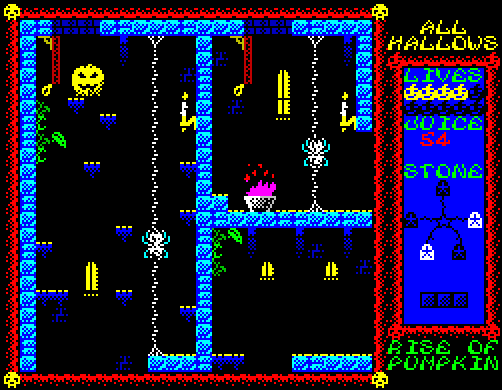 There’s not much else to say about All Hallows, really. It’s a simple game with an interesting movement system and enough charm that I wish there was more of it. It’s not a long game, and once you’ve mastered the pumpkin’s controls and you know where you’re going you could probably finish the whole thing in about ten minutes but, hey, it’s one man’s work and it’s a free ZX Spectrum game in 2018 so that’s not exactly a criticism. 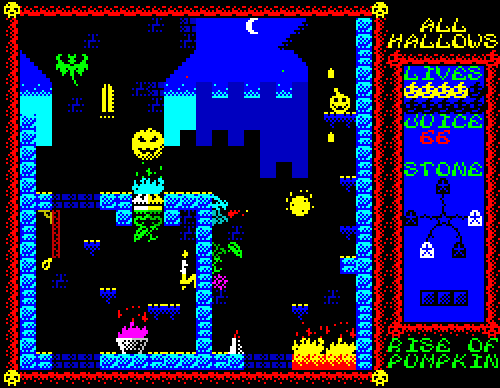 I will say that I love the way this game looks. Detailed without being too fussy, smooth animations and absolutely dripping with Halloween-ness. I’ve said before that the ZX Spectrum is a natural fit for spooky games thanks to most backgrounds being black and everything else being portrayed in garish colour, and that’s very apparent throughout All Hallows. It looks like the game from an early-nineties movie about a computer game that possesses children on Halloween and uses its malicious influence to make the kids murder their parents, and I think that might be the highest possible praise I can give a computer game’s visuals. 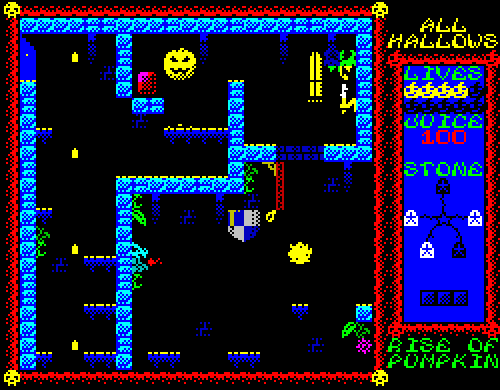 One thing introduced in the latter half of the game are three coloured blocks that you have to collect. They’re keys, basically, or maybe more like the Switch Palaces in Super Mario World, because grabbing them will make certain blocks appear or disappear, granting you access to new areas. 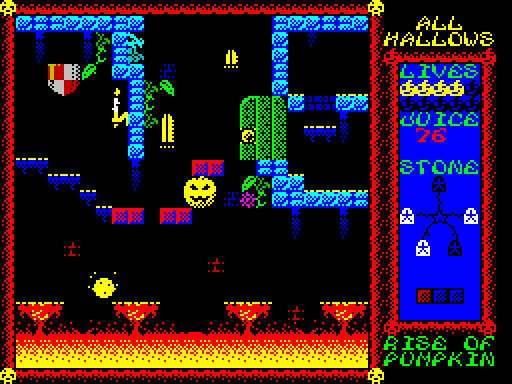 Here, for instance, the stone creates a pathway over this lava pit. The pumpkin seems pleased by this. To be fair, the pumpkin seems pleased by everything. That’s just the way it was carved, man. Actually, is this the first time in the history of VGJunk where I’ve covered a game with a playable pumpkin as the main character? I think it might be. Wow, it only took me, what, eight years? 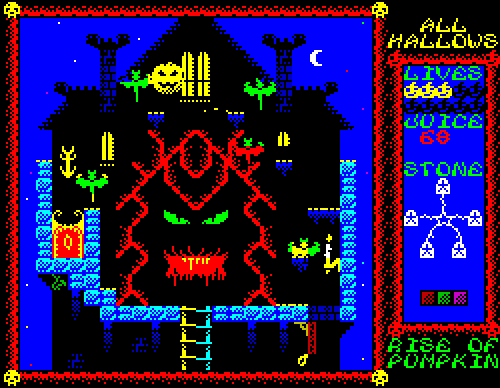 With all the Moonstones nuzzled, all that remains is to reach the top of the castle’s tower, where the Forest Lord is caught mid-emergence and presumably embarrassed and chastened to have been bested by a hero with no limbs. The Forest Lord’s last, final gambit is to chuck a load of bats at you, but all you need to do is bounce over to the left of the screen and drop into the conveniently pumpkin-sized chute to re-seal the Forest Lord and finish the game. If you’re on your last life and you’re low on pumpkin juice then this could be a problem; otherwise it’s a victory lap. Revel in your triumph, young pumpkin! No pies or spiced drinks in your future, although we might chuck a few tealights inside you for celebratory purposes. 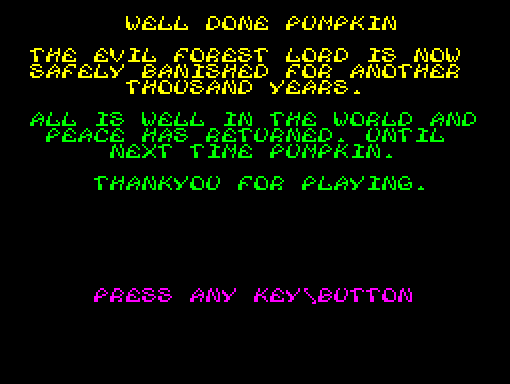 And that’s that, evil sealed away and the buck passed one thousand years hence. “Until next time pumpkin,” it says, and I hope there is a next time because All Hallows: Rise of the Pumpkin was a short but very enjoyable blast of Halloween fun with an unusual movement mechanic and a visual style that has made me want to buy some square stencils and some very bright paint so I can give my bedroom a bold new look. 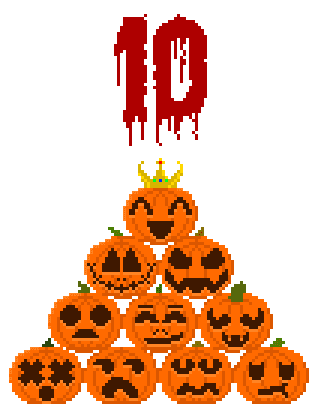 As for the Halloween-O-Meter, what else could a game where you guide a pumpkin through a haunted castle score but a full ten out of ten? It’s called All Hallows, for pity’s sake.