Okay, back me up here: if you were playing a game called SAS Combat Assault, you’d expect it to be an action-packed warfare simulator where you take on the role of the elite Special Air Service and fight against threats to crown and country, right? Just checking, because the 1993 ZX Spectrum game SAS Combat Assault is… not that. So what is it? Well, let’s find out! 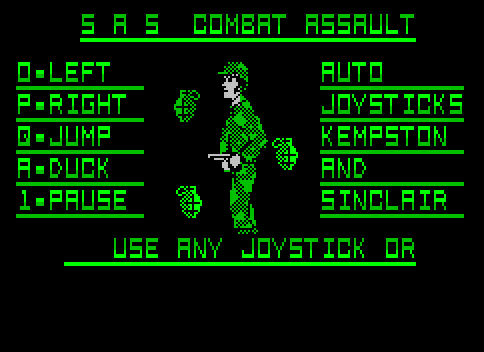 At least the title screen seems to match the name of the game, with a camo-clad soldier holding a gun while a swarm of hand grenades buzz around him. I say that’s a gun, it could quite easily be a large piece of liquorice that the soldier’s saving for when he needs a quick energy boost or, given the position of his hands, he’s having a really hard time fastening his belt. The odds on it actually being a gun are further reduced when you look at the controls scheme and realise there’s no button for fire. That’s a bit worrying, but let’s get started and see what SAS Combat Assault is all about. 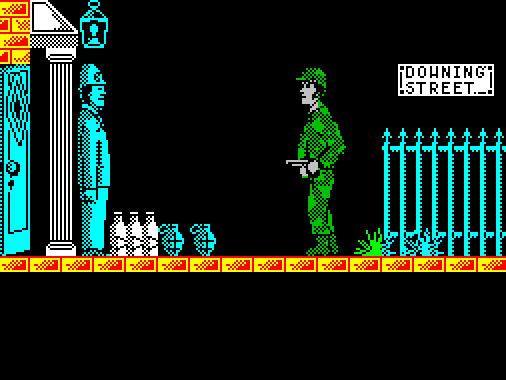 Here we are outside 10 Downing Street, home of the British Prime Minister and, one imagines, the milkman’s most nerve-wracking delivery of the day. Next to the milk bottles are a pair of grenades. You’d think that policeman would have some reaction to the hand grenades, either in their capacity as the protector of the Prime Minister or as a human being with grenades next to their feet, but the plod remains unmoved. So unmoved, in fact, that I suspect he might be a cardboard cut-out. Is this a satirical swipe at austerity politics? Erm, no, this game came out in 1993. The policeman’s just scenery, that’s all.
The SAS soldier can move, of course, and that’s what you’ll be doing for the duration of the game; moving left and right, jumping and ducking. It’s never explained in-game and it doesn’t actually accomplish anything, but the closest thing SAS Combat Assault has to an objective is collecting all the hand grenades located in 10 Downing Street and its vicinity. No, you cannot throw the hand grenades you collect. The SAS are famed for their pacifism, after all. 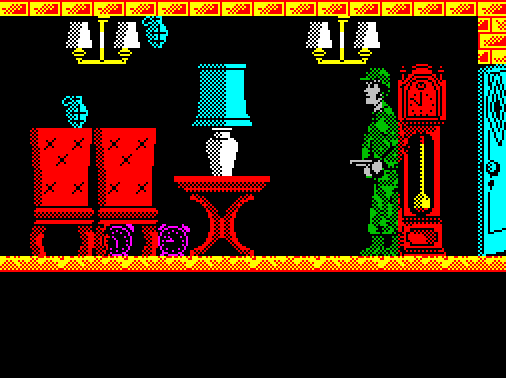 I don’t know what I expected when I entered the building, but I can say I didn’t expect to be attacked by killer alarm clocks. The alarm clocks scoot along the floor and are instantly fatal to the touch. It’s an interesting decision to equate the physical toughness of an SAS soldier with the fluffy seed-head of a malnourished dandelion, but here we are.
Without a weapon with which to fight back against the alarm clock menace, our hero is restricted to jumping and ducking to get past the obstacles and on to the next screen. Here it’s a simple enough matter of hopping over the low-lying clocks… 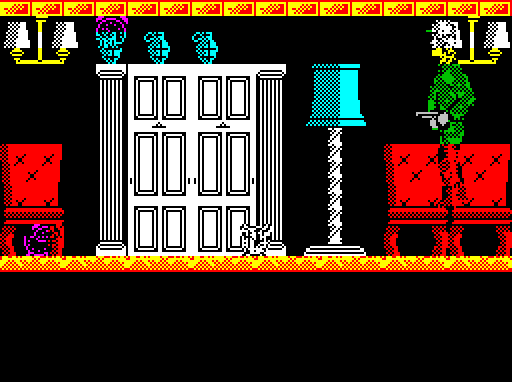 Then I reached the next screen, where this low-high-low arrangement of killer clocks stumped me for quite a while. Part of the problem is that you can stand on the door panels, because the game treats them as platforms for some reason and when you end perched a foot above the floor it can really throw off your plan of attack. The other problem – and you may have noticed this yourself – is that the player character's sprite is fucking massive. Just ridiculously lanky, taking up eighty percent of the screen’s vertical height with his delicate, easily-killed frame. To say this makes avoiding obstacles difficult would be an understatement. 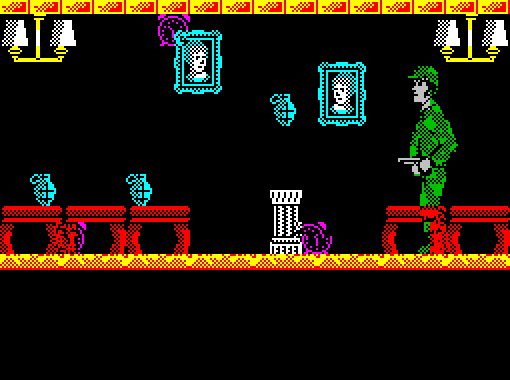 And so Big Boy Soldier Man makes his way through the corridors of power, collecting grenades and failing to avoid the hazards because he’s the size of – and about as manoeuvrable as – a mighty redwood. We’ve already seen all the gameplay SCA has to offer, so there’s nothing else to do but travel the four floors of Downing Street and jump over some hedgehogs. 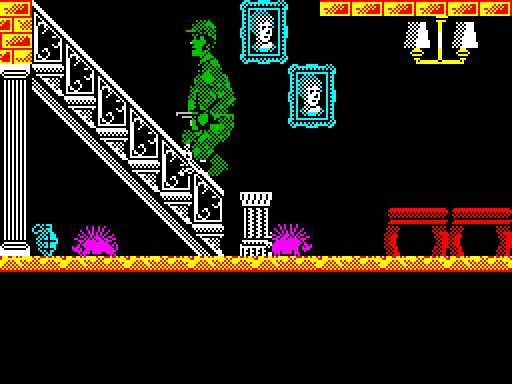 That’s right, hedgehogs. Not armed terrorists, not nefarious villains who plot of kidnap the Prime Minister and hold the country to ransom, but hedgehogs. Bright pink hedgehogs, sure, maybe even hedgehogs with malice aforethought, but they’re still just hedgehogs. 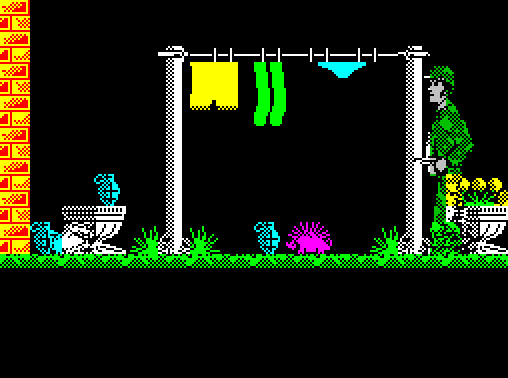 It makes a bit more sense that you’d find hedgehogs in Downing Street’s back garden, I suppose. Let’s just hope the IRA don’t launch a mortar attack while we’re out here. If our hero is killed by brushing against a hedgehog, getting hit by a mortar strike would probably cause a fracture in space-time that wipes out his decendants for a thousand years hence.
Rather unsettlingly, there are a pair of very small underpants hanging from the washing line. The Prime Minster in 1993 was John Major, so we’re left with the deeply unpleasant mental image of Major squeezing himself into a tiny pair of budgie smugglers. 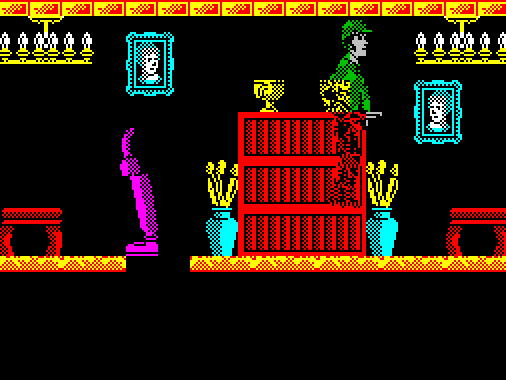 The second floor is patrolled by a rogue vacuum cleaner, or possibly a severed human leg. You might be wondering how you get past it when it covers almost as much of the screen’s vertical height as Stretch Armstrong here, and I was wondering that too until I bit the bullet and jumped into it. I emerged unscathed on the other side, because apparently only the very bottom part of the vacuum has a hitbox. Naturally this was not communicated to the player in any way. 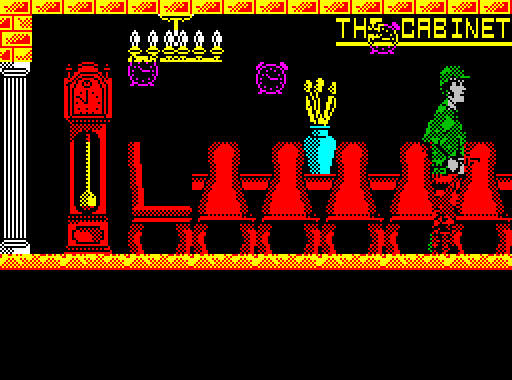 Roughly in the centre of the game map is the Cabinet Room, which is the only room in the game to get an on-screen label. I have no idea why this is the case. I have no idea why any of this is happening, to be perfectly honest. I’ve got my theories about how SCA ended up being made the way it was, though, and that’s that the designer thought “hey, I’ve made a really cool-looking sprite that’s big and detailed, so let’s stick it in a platformer that really needs a much smaller player character. Also I couldn’t figure out how to code a firing gun so this soldier’s only weapon is the hope that his sheer inadequacy will make the enemies take pity on him.” 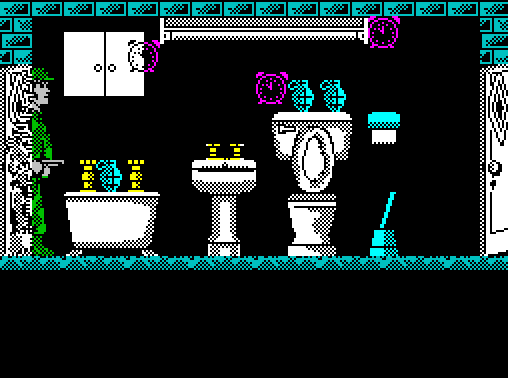 Ah yes, the Prime Ministerial khazi. There’s something very British about the detail of having the toilet brush included here, I feel. Here you can also see the eye-prickling graphical clashes that SCA is absolutely rife with. If it were me, I would have styled it out as being intentional – the soldier is such a master of camouflage that he can blend in with any scenery, a veritable chameleon of a man! 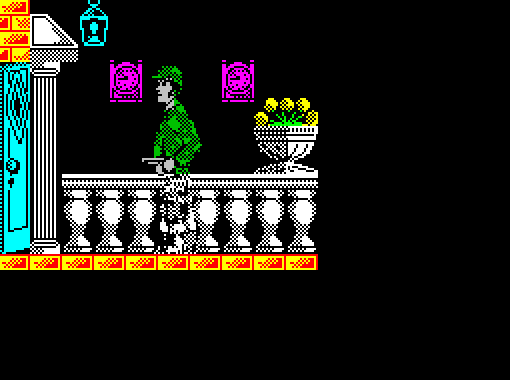 There are a bunch of balconies at the ends of each floor. They’re the same as the indoor areas, with obstacles to avoid and grenades to gather, but I suspect that there is such a preponderance of balconies because this is (allegedly) a game about an SAS soldier, and thanks to the 1980 Iranian Embassy siege the SAS have something of a history with balconies. There's nothing as exciting as hostage rescue or rappeling down the building in this one, of course, but you can take a shortcut to the ground floor by walking right off the balcony. Just try not to land on a hedgehog. 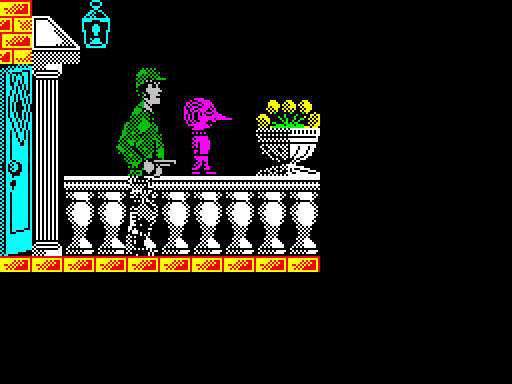 The top levels of the building are patrolled by these pointy-nosed gremlins in comfortable sweaters. They’re functionally the same as all the other enemies, but I believe they’re supposed to be former Labour Party leader Neil Kinnock, or perhaps his army of lab-grown homunculus clones. More specifically, I think they’re based on Kinnock’s Spitting Image puppet, although they look more like Little My from the Moomin books to me. 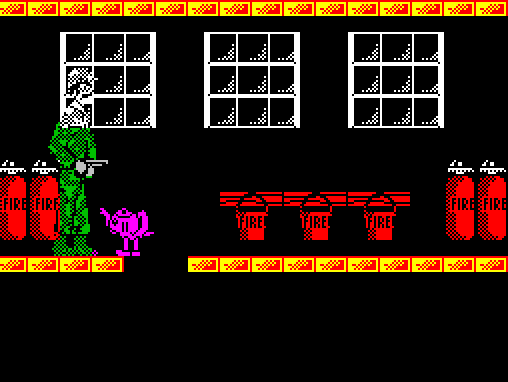 By now I’d explored most of the building – it’s not very big – and I was close to having collected all the grenades. “What joy,” I thought, “soon this game will be over and I can write a quick article about how weird it is that a game called SAS Combat Assault contains no combat and the only assault is on your eyeballs.” Then, for reasons I may never ascertain, all the grenades respawned. 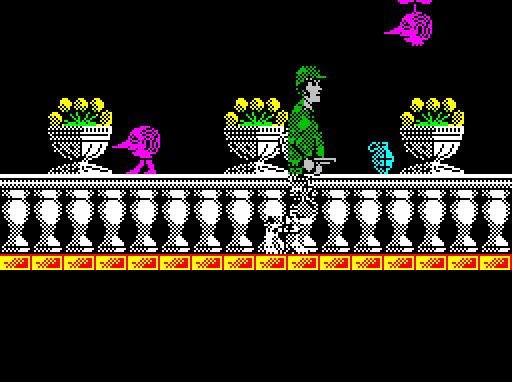 Undeterred, I gathered all the mental strength and POKES for complete invulnerability I could muster and dashed through 10 Downing Street once more, this time managing to grab every grenade in the place and… nothing happened. Some naive, hopeful part of me thought the game might end, if not with a proper ending then at least a congratulatory message along the lines of “Well done, you’ve stopped the sinister machinations of the Hand Grenade Fairy” but alas, the game just kept going. I’ve definitely seen enough, though. More than enough, thanks to that washing line. 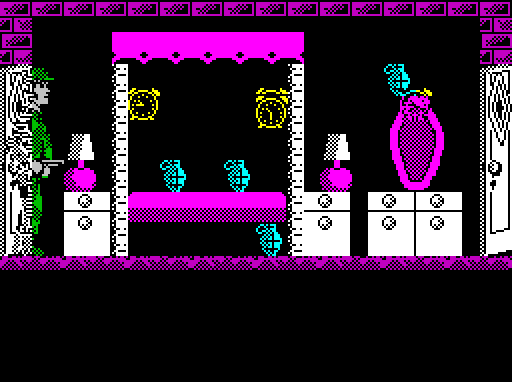 SAS Combat Assault is a pretty terrible game, with a hero who’s too big for the world he inhabits and awkward, fiddly gameplay that would surely prevent anyone from extracting any pleasure from the proceedings. I mean honestly, what kind of game allows you get stuck halfway up the side of a door like those pictures of goats standing on the face of a dam? Yet I can’t be too harsh on it, because SCA wasn’t a proper retail release. Instead it appeared on a cover tape attached to Sinclair User magazine and was obviously a one-man job. That would be the January 1993 issue of Sinclair User, by the way – over a decade after the ZX Spectrum launched. Okay, maybe I can be a bit rougher on SCA. You know what else was released around this time? The first Starfox game. Yikes.