SNK are a developer with a long and star-studded history, but here’s a game from them that you might never have heard of: it’s the 1983 grab-em-up Unch Obile! 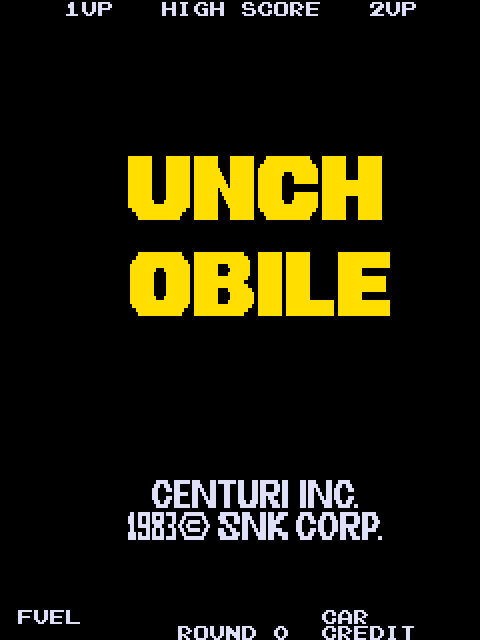 Kind of a weird name for a game, honestly. Doesn’t tell you much about what gameplay you can expect, and it sounds a bit like the name of a third-tier Star Wars character. You know the one, the guy who appears for two seconds in a montage of pilots during the big space battle but still gets an action figure. Oh, wait, I’m receiving word that the game isn’t actually called Unch Obile. 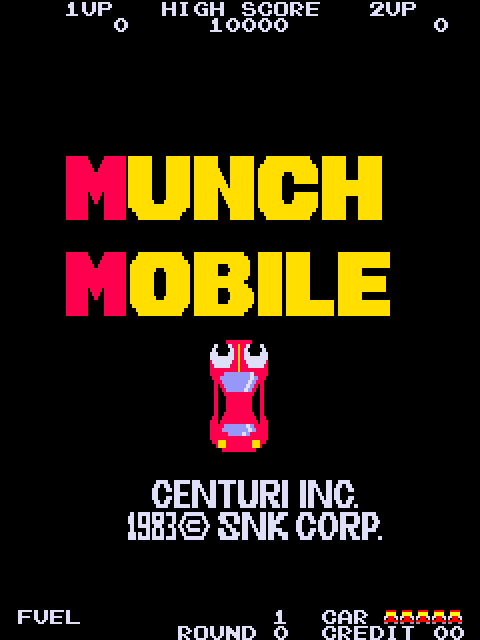 Oh, Munch Mobile. That makes much more sense. Okay, not much more sense. Munch Mobile’s still a weird title unless you’re brainstorming names for your new food truck, but at least it’s made of real words. The missing letters were dragged onto the title screen by this car that looks like Lightning McQueen’s foetus. If that sentence has caused you to start wondering exactly how the inhabitants of the Cars universe reproduce, then I’m terribly sorry. 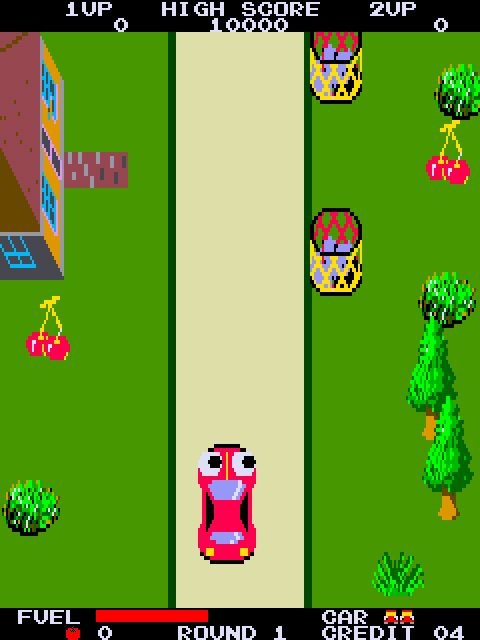 Get used to seeing that car, because that’s what you’ll be controlling for the duration of Munch Mobile. If you’re anything like me it won’t be a long duration, but I admit that I’m not the most patient person in the world.
Okay, so now you’re on the road, and the road is scrolling forward. It’s your job to get the Munch Mobile from one end of the highway to the other by steering it left, right, backwards and forwards, avoiding obstacles and using its stretchy arms and disturbingly human hands to grab the snacks that line the road. 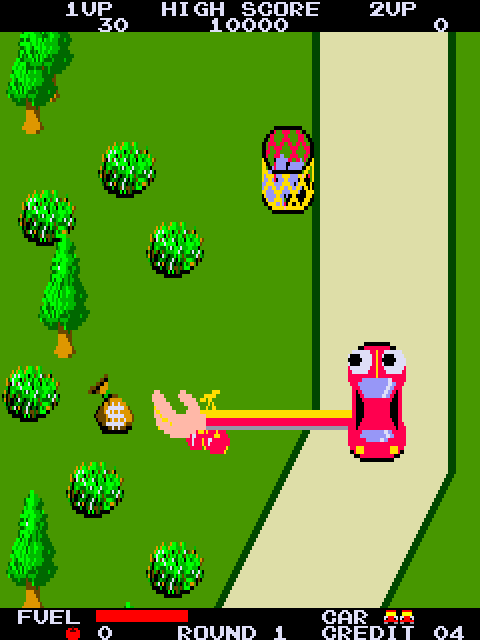 That’s right, car arms. The long arm of the car. The gummy, grabby arms that all cars have. Munch Mobile’s cabinet comes with two joysticks: one for controlling the car and the other for extending your arms to the left or right. You can’t reach to both sides at once, implying that the Munch Mobile only has a single arm with a hand on each end, and the purpose of stretching your arms is to grab the items as you drive past them. 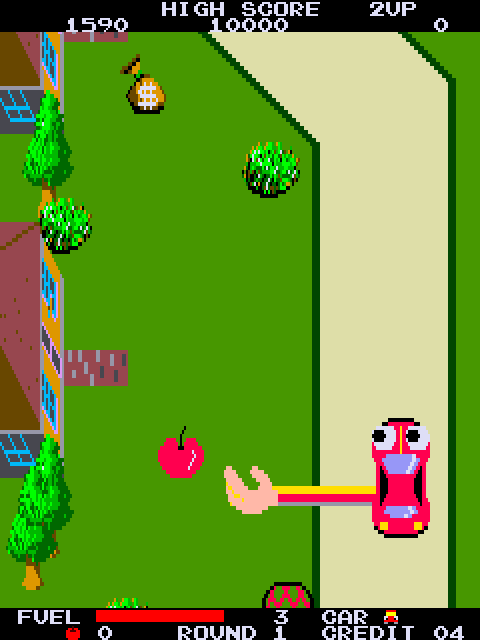 Mostly this means collecting fruit. Why does a car need to eat fruit? So it doesn’t get turbo-scurvy, of course. Or maybe it’s that in the early eighties fruit was just what you collected to get points in arcade games. There are also bags of cash that you can collect for even more points, but their real purpose is to teach a lesson about the deleterious effects of greed. That was the impression I got after repeatedly trying to grab them only for a passing bush or tree to hurt Munch Mobile’s delicate hands – and if your hand does collide with the foliage, your hand becomes unusable for a few seconds. Merely surviving the hellish gauntlet that is Munch Mobile’s daily commute is hard enough, so I found it was generally best to ignore the moneybags because you’re going to need your hands at a moment’s notice. 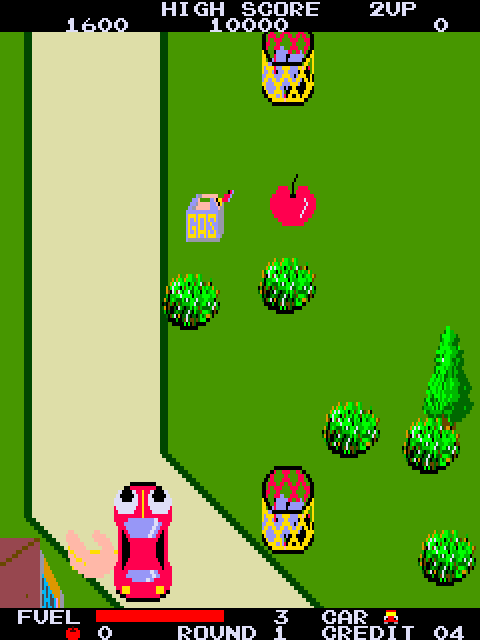 You need your hands free to grab the petrol cans, mainly. If the Munch Mobile runs out of fuel you lose a life, so grabbing extra gas has to be your top priority if you want to make it any further than the first stage. The Munch Mobile drinks the petrol for sustenance, gets extra vitamins from the fruit it eats and collects the cash to spend on, I dunno, car insurance. Makes sense to me.
Grab and go, that’s the name of the game here. The grabbing takes a bit of getting used to, actually – you’d think that the Munch Mobile would grab onto the fruit or whatever when its hand touches the item, but instead it only catches hold when you start pulling your hand back towards the car, so there’s an element of timing to the gameplay. If this is making Munch Mobile sound like an arcade conversion of hook-a-duck then congratulations, you figured it out. 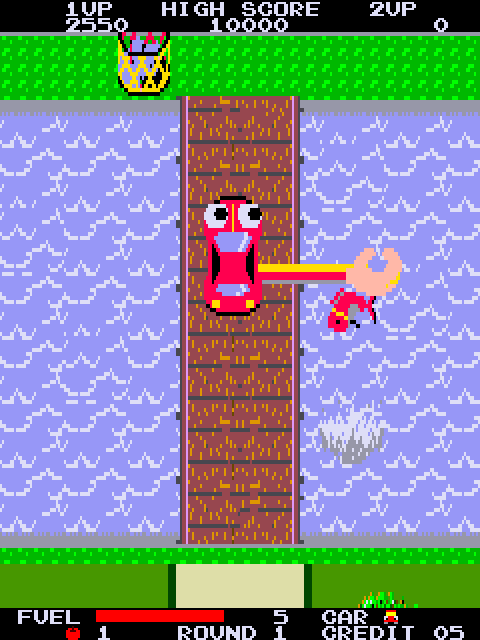 You can also grab these leaping fish. I assume you can, anyway. I never managed to grab them, so I didn’t get to see the Munch Mobile shove the still-living fish into whatever part of its chassis serves as a mouth. 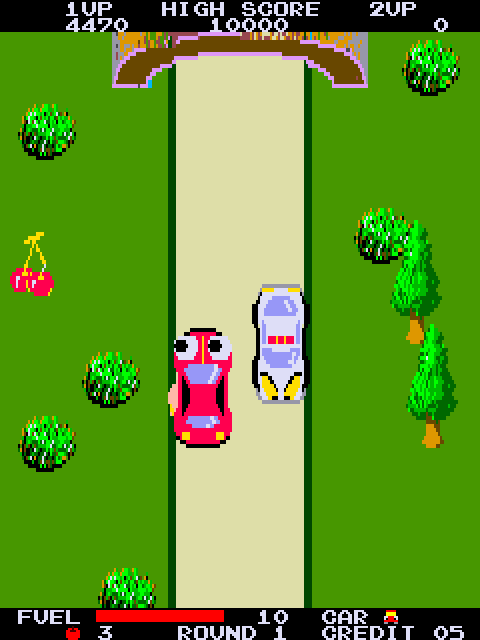 Aside from the grabbing, Munch Mobile’s gameplay is about driving. Sadly, the driving is terrible. The big issue is the narrowness of the roads, because despite chomping down all this healthy fruit the Munch Mobile is a sickly, malformed creature that exists as a blasphemous mockery of life and as such will explode if it makes even the slightest contact with the edge of the road. This makes avoiding things like these oncoming police cars rather difficult. Not because it’s hard to tell where the other cars are coming from – they’re either going to be on the left or the right side of the road – but because there’s barely room for two cars to pass side-by-side and it’s extremely easy to nudge the joystick a hair too much. You brush up against the grass, the Munch Mobile explodes, try again. 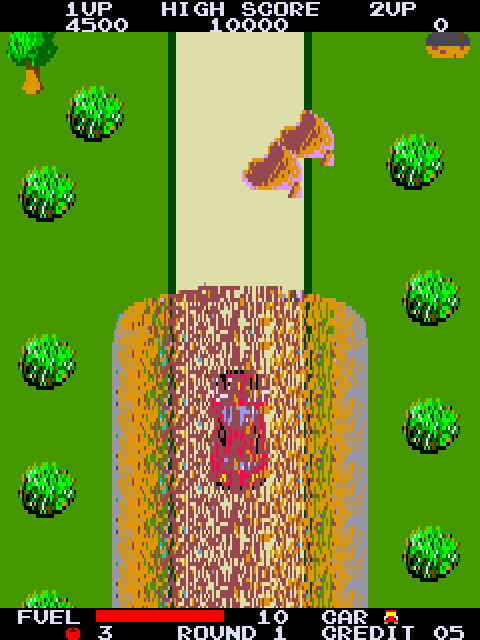 I think I’m just about getting the hang of it now, though. I’ve made my way through the tunnels that I think are supposed to be hollow logs but look more like bones with the marrow scooped out, I’ve avoided the rocks in the roads and I’m speeding my way towards home. 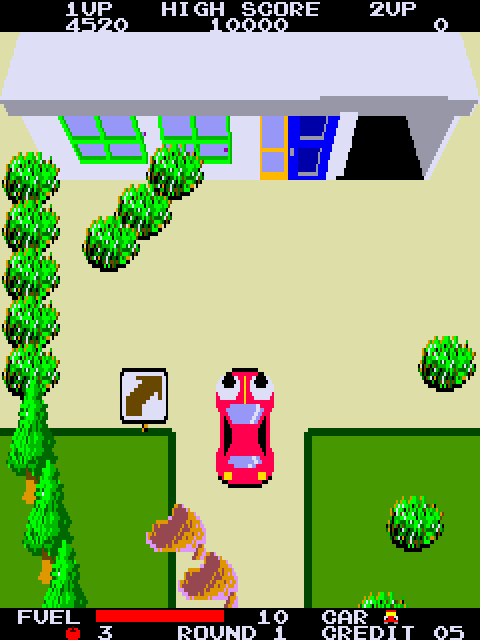 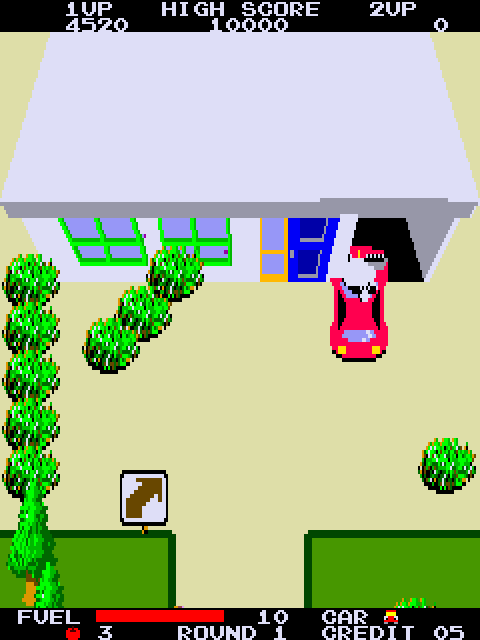 Munch Mobile ploughs through the living room wall, killing a family of three and severely injuring itself in the process. It uses its rainbow arms to reach for the telephone, planning to call for help, but the roads leading to the house are so narrow and clogged with rocks that the emergency services cannot reach the Munch Mobile in time and it slowly bleeds to death. “If only I’d managed to grab one of those fish,” thinks the Munch Mobile in its final moments, “I could have found some peace in death.” 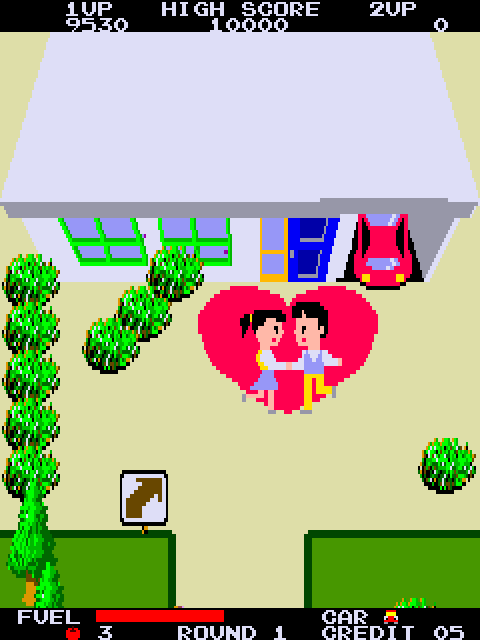 Turns out you’re supposed to guide Munch Mobile into the garage. This makes a happy couple appear, a couple so deeply in love that they colour-coordinate their outfits and, erm, have the same face. Oh god, are they related? That’d explain why they live in an isolated cabin out in the woods.
This marks the end of the stage, so it’s on to the next stage because the Munch Mobile can’t sit still - it’s always got to be out there, grabbing at fruit. I think we’re supposed to assume that we’re actually controlling one of the lovestruck couple and each stage is them commuting home from work in their grabfabulous snacktacular wackywheels munchmobile. Think Chitty Chitty Bang Bang, but with more scope for accidentally clotheslining a shrub. 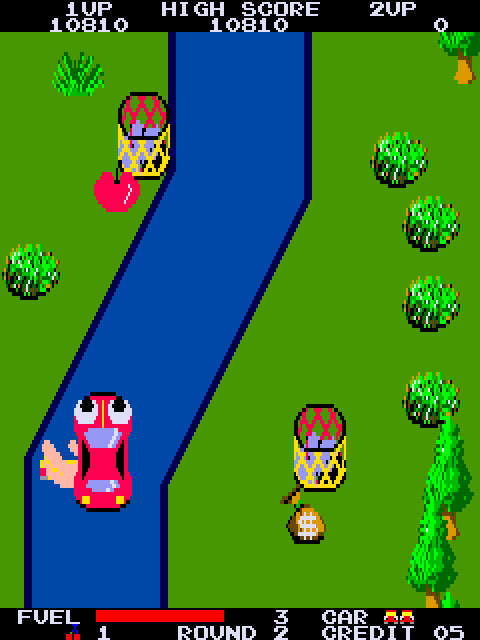 Munch Mobile doesn’t get much more interesting as it goes on. More frustrating? Sure, mostly because fuel management gets extremely strict from stage two onwards, and if you fail to collect a single roadside jerrycan then tough, you’ll run out of fuel and there’s nothing you can do about it. 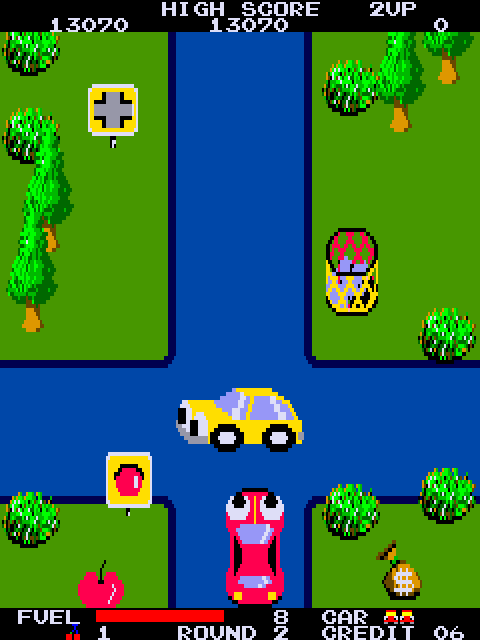 And so it goes. New stages have a very thin trickle of new obstacles like these traffic-heavy crossroads until around stage six, at which point I really felt like I’d seen everything Munch Mobile has to offer. I might be wrong. It might open up a bit later, or give the Munch Mobile a laser death-cannon, or even have a proper ending. Unlikely, I know – especially that last one – but even if I wanted to play any further I couldn’t because Munch Mobile is too bloody hard. It might look like the fever dream of an overworked Brio manufacturer, but Munch Mobile’s unforgiving collision detection and stringent fuel requirements meant it was a real struggle for me to get beyond the fourth stage or so. 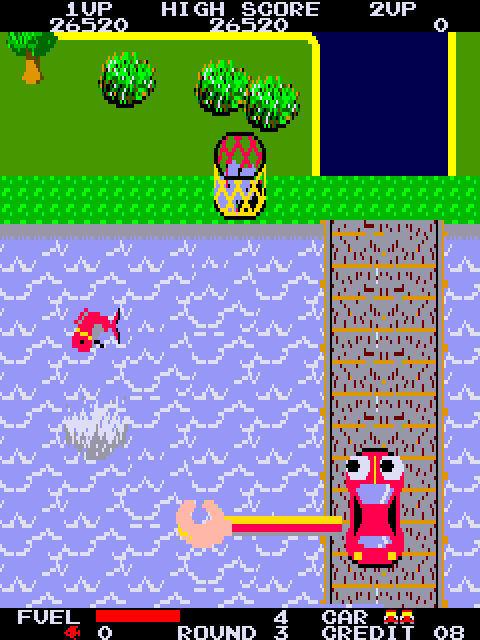 Things get a little easier when you realise that you only need to grab the petrol canisters. Everything else is optional unless you’re desperate to get on the high score table, and trying to drive and grab on the later stages results in a pat-your-head-and-rub-your-stomach feeling. That’s not necessarily a bad way to design gameplay: having to juggle two different types of movement can make for a fun experience… just not in Munch Mobile, where the slightest lapse in concentration means you’re likely to clip a wall and have to start again. 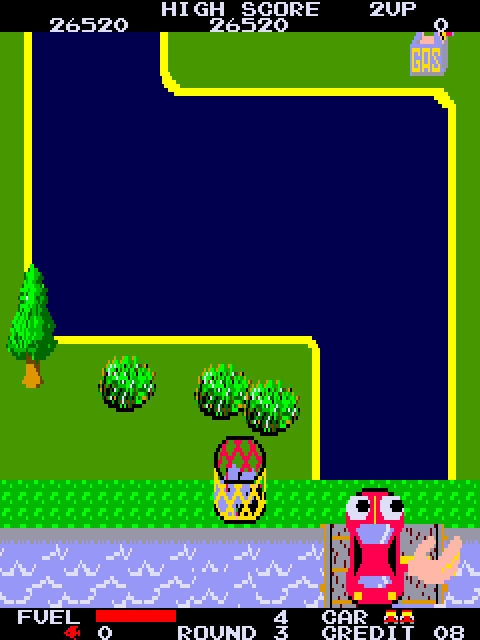 This is the absolute worst section when it comes to the driving. It looks simple enough, but because Munch Mobile’s horizontal movement is so slow you have to get the exact positioning and timing of your right-to-left movement correct. Start a fraction too early and the back of your car will touch the bottom corner and you’ll explode, a second too late and you won’t make it all the way across. It’s an absolute pain in the arse, that’s what it is, and it crops up in every stage after the first one. Well, you wouldn’t put something this horrible in the first stage, would you? 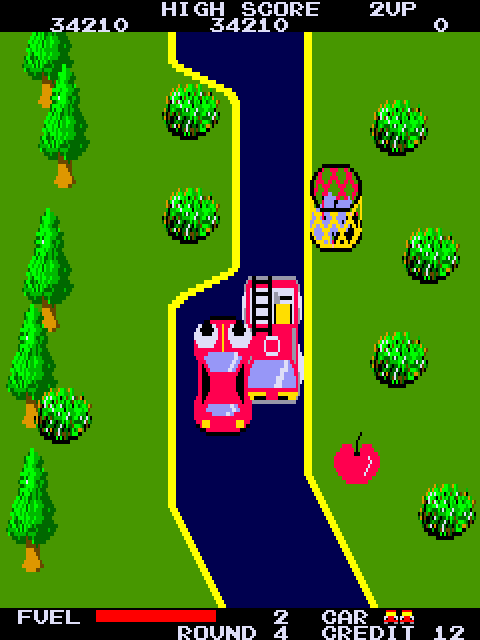 Munch Mobile’s approach to stage design is a bit weird, honestly. Most of the layouts seem to be repeated over and over, with the odd new section added in with each new stage. It gets very hard to tell them apart after a while, and has the effect of making the game very boring very quickly. Once you’ve gone through the extremely frustrating “nip into a lay-by to avoid the oncoming fire engines on this single-lane road” area once,  you really won’t want to do it again but tough, it’s part of every stage now. Munch Mobile’s stage design is a katamari of awkward, overly difficult yet completely unrewarding gameplay chunks, haphazardly bundled together in a way that can’t be glossed over by the cutesy graphics. 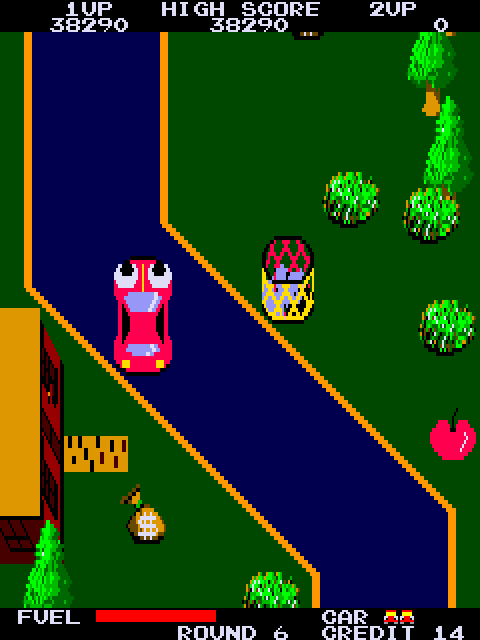 And it is pretty cute. It’s got some nice touches, at least: Munch Mobile’s big googly eyes move around to look at whatever it’s grabbing, and they get all droopy and sleepy when it’s running low on fuel. That’s nice. You can also get extra points after you’ve eaten the fruit you’ve grabbed by dropping the leftovers into one of the rubbish bins you drive past. That’s fun, and a good way to teach children that they shouldn’t drop litter lest a living car reaches out from the shadows and throttles them with its rainbow arms. “Beep beep,” whispers the Munch Mobile. “Beep beep.” 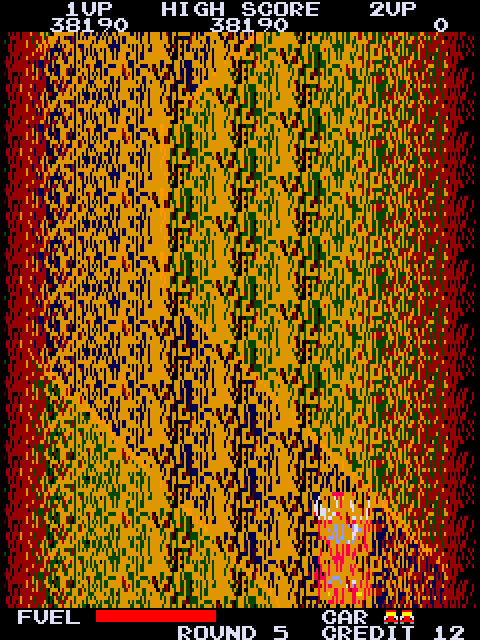 By the time I reached the sections where you can’t see where the bloody hell you’re supposed to be driving because the screen is covered by a close-up of used toilet paper, I decided I’d had enough of Munch Mobile. This is supposed to be the holiday season, a time of joy and celebration, and I’m wasting it playing this crap. I could be wasting it by playing slightly more entertaining crap! Munch Mobile might be interesting purely as a little-known game by SNK – and hey, if they want to add the Munch Mobile as a playable character in Neo Geo Battle Coliseum 2, I’d be fine with that – but as a gameplay experience I’d have had more fun with one of those Tomy road racer steering wheel toys. That’s hardly surprising, though. Those things ruled.